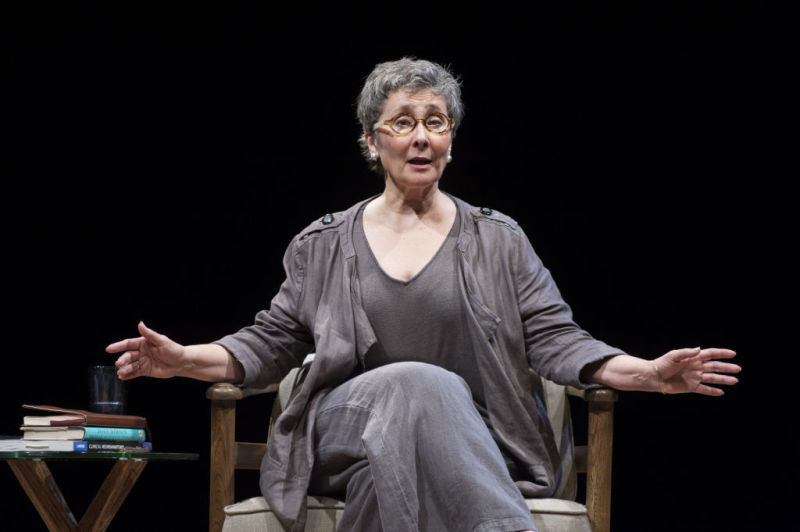 Sarah Day plays author Joan Didion in a play adaptation of "The Year of Magical Thinking" at American Players Theatre. 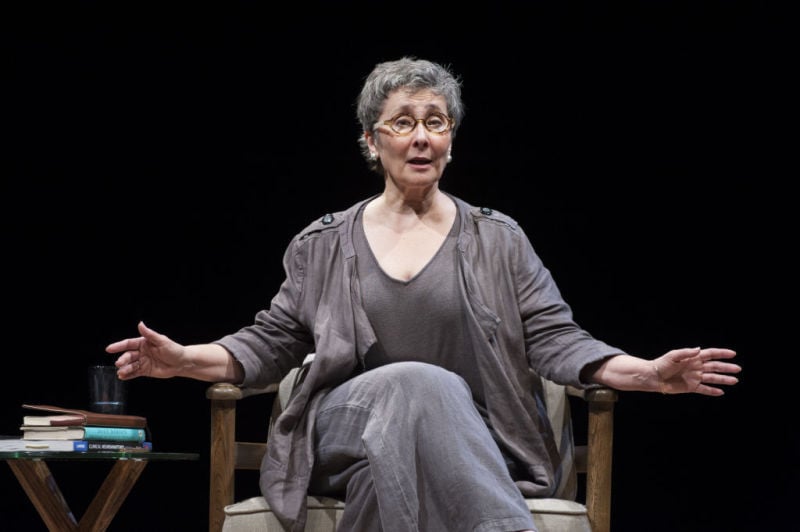 Sarah Day's chair in "The Year of Magical Thinking" took Trieloff many hours to find.

SPRING GREEN — Joan Didion, dressed in gray linen and represented on this stage by the inimitable Sarah Day, narrows her eyes at us.

Didion is here, in the Touchstone Theatre, to share a story of an extraordinary, traumatic year. We are here to listen, and to be challenged.

"I'm telling you what you need to know," Day, as Didion, says, with urgency in her voice.

"You don't want to think it could happen to you. That's why I'm here."

"The Year of Magical Thinking," running in repertory through Oct. 4 in American Players Theatre's indoor space, is a 2009 one woman theatrical adaptation of Didion's forthright, poetic 2005 memoir about the sudden death of her husband, John Gregory Dunne, at 71.

More like a conversation than a play, "Magical Thinking" is only sort of linear. Like most conversations, it meanders.

And as in conversations, the audience responds to her individually.

"You think I'm crazy, don't you?" Didion asks, and a middle aged couple quietly shake their heads. Next to them, a woman grabs her companion's arm, as if to keep him from the fate Didion keeps insisting "will happen to you."

When Didion's daughter, Quintana, relapses after months of lingering illness, people's hands go to their faces, to their mouths, as though to cover a gasp. Some sniffle audibly.

And it's clear I'm not the only one whose chest constricts and eyes prick when Didion — just "Joan" in the program, like a friend — explains why she can't give away her late husband's shoes.

He'd need them, she rationalizes, if he was to return.

"I needed to be alone so that he could come back," she says. "That was the beginning of my year of magical thinking."

While planning her husband's cremation and funeral, the Didion of "Magical Thinking" quietly harbors what she knows to be irrational hopes. If she plays along with the public ritual and does everything right, from the New York Times obituary to the Gregorian chant, John won't really be gone.

She even orders an autopsy of Dunne's body because, if they find exactly what went wrong, can't the doctors fix it?

Didion's observations from Quintana's hospital room ("rose-patterned wallpaper") flow into memories of Malibu, her daughter's bleach-blonde hair tinged green from pool chlorine, a stranger's observation that the girl is "the picture of Ginger Rogers."

She finds a "vortex," an undertow of longing that Didion, newly a widow, tries to physically avoid. She cancels an appointment with a dermatologist, even though she clearly needs stitches. Driving there would take her too close to their old house. She listens to a different radio station. She determines, it seems, to make no new memories without her husband and child.

Didion, as Day presents her, is quiet but insistent. A measured, educated story-teller, she knows enough not to present her marriage to Dunne as perfect. In her stories, they fight; she threatens to leave with Q. After one argument, he takes her Corvette and drives up the Pacific Coast Highway, fuming.

"The Year of Magical Thinking," directed sensitively, if a bit passively, by Brenda DeVita, feels delicate, like the wrong music or a loud response could break the spell. Day takes long pauses — in such a wandering story, one may worry she's lost her place — and seldom moves, but to pace a bit or grab a book next to her chair.

Set designer Yu Shibagaki places Day on a wide chair, set on a raised platform among flickering candles. The flames evoke both an altar and a romantic evening — Didion had made a fire in the fireplace the night her husband died.

As she charts her journey through grief, with her attempts to "manage" the situation, solve the problems and restore her life to something she can recognize, Didion continually returns to her husband's words.

In this elegant play, Didion's "last" words are wrenching, honest and ultimately, universal.

“The Year of Magical Thinking”

In repertory through Oct. 4

Banksy shares video of him creating his latest artwork

The Week Ahead: Madison Makes, ¡ACTIVISTA!, Zun Lee and more

This week, celebrate your neighbors’ forays into the DIY craze during "Madison Makes," observe International Women’s Day during ¡ACTIVISTA!, join a virtual talk by visual artist Zun Lee and more!

Sarah Day plays author Joan Didion in a play adaptation of "The Year of Magical Thinking" at American Players Theatre.

Sarah Day's chair in "The Year of Magical Thinking" took Trieloff many hours to find.