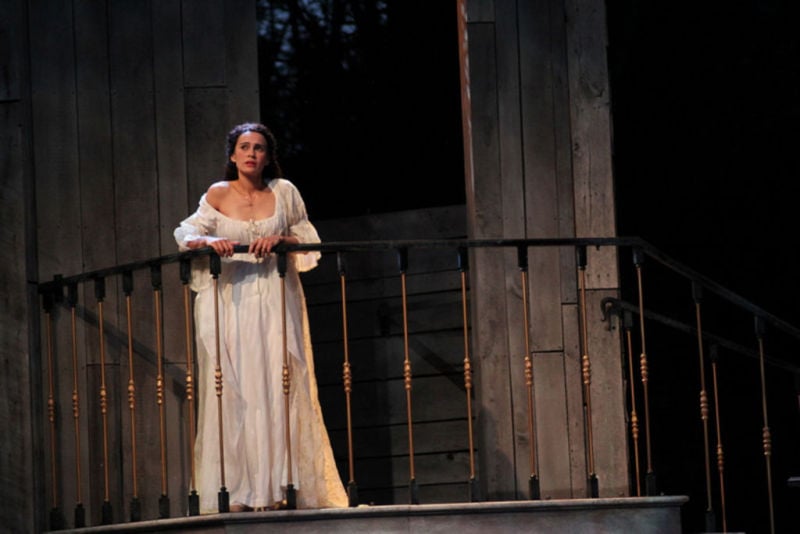 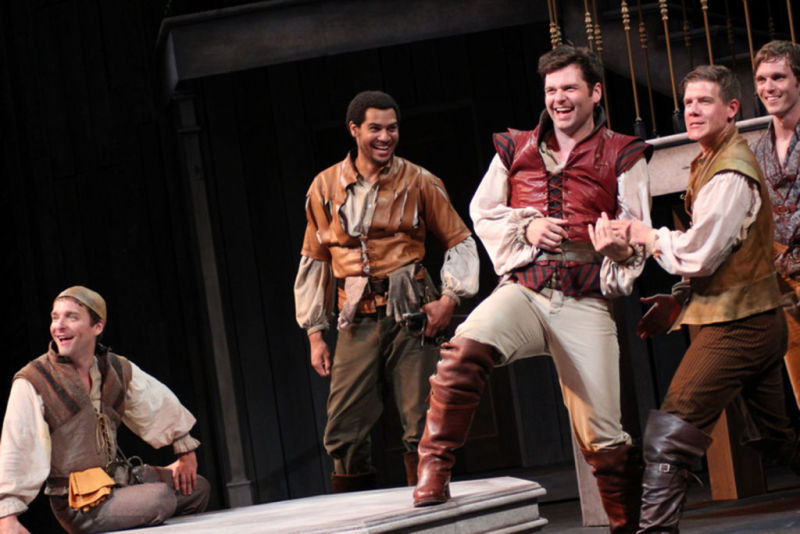 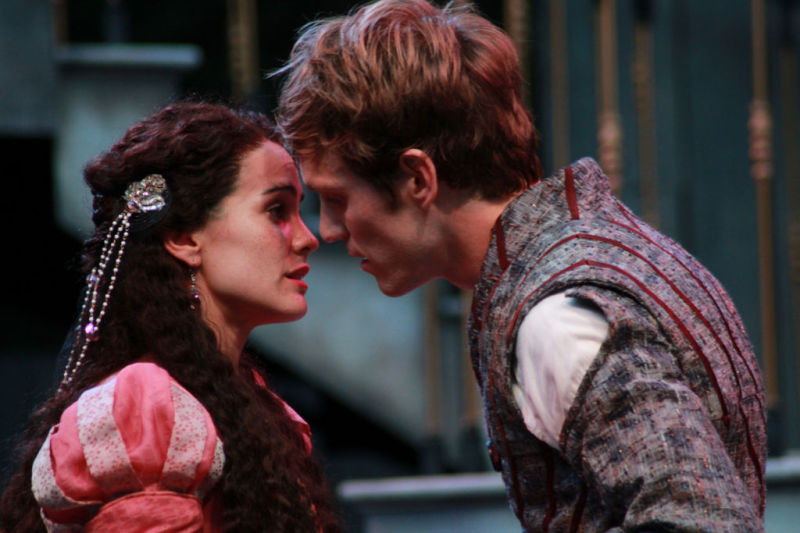 Juliet (Melisa Pereyra) and her Romeo (Christopher Sheard) fall in love in an instant in "Romeo and Juliet" at American Players Theatre. 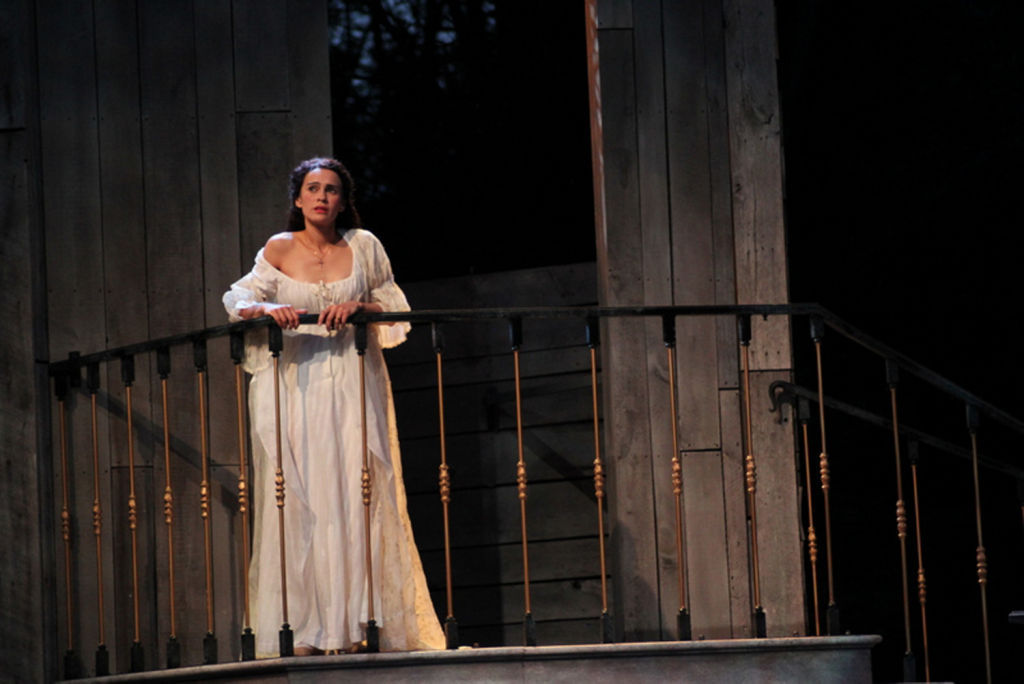 SPRING GREEN — There are no spoilers anymore for a play like "Romeo and Juliet."

The names of Shakespeare's best known couple are synonymous with doomed love, teenage passion that cannot survive in a city beset by civil war.

And yet American Players Theatre's beautifully staged production, directed by Jim DeVita and running up the hill through Oct. 4, makes one wish that, just this time, the outcome could be different.

In 1995, DeVita starred himself as Romeo during his first season at APT in a production Milwaukee critic Mike Fischer called "smashing and sexy." In his current staging, DeVita turns a laser-like focus onto the primary pair of lovers, whose instant obsession with one another seems to eclipse everything else onstage.

As the young couple who are smitten the moment they "let lips do what hands do" at a masked ball, Melisa Pereyra and Christopher Sheard capture both the awkwardness at first meeting and the grave seriousness of teenagers.

Romeo and Juliet believe their very lives are worth sacrificing for someone they've known only a day, and it's the strength of the actors' conviction that drives the entire play.

While Sheard's Romeo is a gentle soul, easily swayed by love, Pereyra's fiery Juliet burns hot and fast, the hint of an Argentine accent coming out as she bemoans her lover's fate.

She's tiny, but with an iron will and a powerful voice that resounds to the back of the theater. Pereyra plays a very young teenager, but already her Juliet is a woman you wouldn't want to cross.

Nate Burger makes for a marvelously funny Mercutio, often played one-note as an angry hothead. Here, we see Mercutio's genuine affection for Romeo amid his teasing; his language sounds off-the-cuff and casual.

Though the fight scenes, staged by Matt Hawkins, are thrilling and intense, it's like these boys grew up while no one was paying attention and someone replaced their toy swords with real ones. When Tybalt (Eric Parks) and Mercutio die on the street, the violence seems less inevitable than shocking and sad, like even they didn't know what they were playing at.

Though the play has been judiciously cut, the second act wrestles with pacing; scenes with Friar Laurence (John Pribyl) and Juliet's nurse (Colleen Madden) can drag. But these adults also provide some needed comic relief, notably Madden as she prattles on about Juliet as a toddler.

Costumes by Rachel Anne Healy were sumptuous, with slight color nods to the split between Capulets (blue/green) and Montagues (red/brown). Juliet's purple-patterned gown parts to reveal a deep magenta layer underneath, and the ropy silver ornamentation on her dark hair is lovely.

The fate of Shakespeare's lovers can obviously not be changed, but this summer's rainy weather has added an element of unpredictability to performances up the hill.

On opening night, the lovers' urgency seemed reflected in rolling storm clouds. When Tracy Michelle Arnold, as Lady Capulet, told her daughter she must be married, Juliet's dismay echoed in real thunder in the sky. As the friar explained to Juliet how to fake her own death, lightning flashed above the stage.

After so many years of interpretations — this is the seventh production from APT since 1982 — it may seem impossible to say something new about "Romeo and Juliet." But this staging, much like David Frank's "Much Ado About Nothing" with which it runs in repertory this summer, has the ring of emotional truth to it.

That's why, even though we know the ending, we keep coming back to this "story of woe ... of Juliet and her Romeo."

Rooster will appear in court after killing owner during illegal cockfight

Rooster will appear in court after killing owner during illegal cockfight

Center your cool even when your kids are losing theirs

What to clean every day and what can wait

What to clean every day and what can wait

Juliet (Melisa Pereyra) and her Romeo (Christopher Sheard) fall in love in an instant in "Romeo and Juliet" at American Players Theatre.