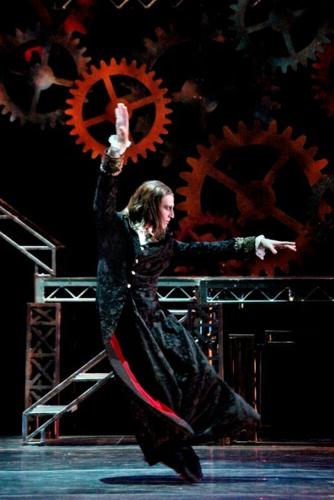 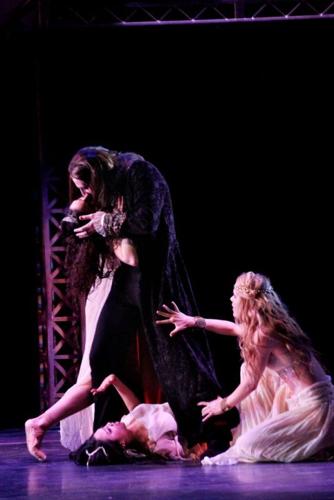 Sex, sweat and camp mingle onstage this weekend in Madison Ballet's new production of “Dracula,” a stylized vampire story that puts a swivel in the hips of the dancers.

With an electrified score by Michael Massey that recalls his days as a rock band frontman and sensuous choreography by artistic director W. Earle Smith, “Dracula” should attract an entirely different crowd than the pirouetting tots and their parents who return yearly to “Nutcracker.”

This is Smith letting his hair down, and the company loves it.

It helps to know the bones of Bram Stoker's story before heading into the Capitol Theater. (Smith has helpfully provided a thorough synopsis, but perhaps half of it is actually shown onstage.)

In brief: Harker, a lawyer, meets Count Dracula in Transylvania. After learning what he can from his visitor, Dracula travels to London, where he bites one woman, mesmerizes another and eventually falls at the hands of the men protecting them.

Matthew Linzer plays the original irresistible vampire, a cooly androgynous predator who makes no distinction between genders when he's lusting for a drink. Smith embraces moments of homoeroticism in his staging, letting Dracula linger over Harker (Brian Roethlisberger) and newly vampiric Lucy clutch longingly at her former best friend.

Linzer, a dancer from the Bay Area who makes his Madison area debut with this production, captures Dracula's elegance as well as his menace. It's no surprise that bad girl Lucy (Marguerite Luksik) succumbs first, after a sassy solo turn full of rolling shoulders and hip thrusts.

As the virtuous Mina, Jennifer Tierney retains much of the music box ballerina quality she projects in “Nutcracker,” except now she's wearing a black bustier and thigh-high fishnets.

Tierney's best pairing is with Linzer's Dracula, who lifts and twirls her like she's a plaything. (As Mina's fiance, Roethlisberger struggles in their two duets; every heft looks like a monumental effort.)

From start to finish, the dancers look like they're enjoying themselves. James Stevko goofs and rolls around on the floor as the madman Renfield (a fun part, though his connection to the story isn't clear in this telling).

A scene when the vampire hunters retrieve their weapons from a trunk feels like “Final Fantasy” meets “Men in Black” — cool, I have a gun! Bang, you're dead! Writhing, oversexed minions and Dracula's elongated death scene are all part of the melodrama.

Massey's synth-heavy score has high and low points. There are moments that capture the best part of classic rock, the bass and drums driving each time Lucy gets tossed from one man to the next.

Too often, though, the band introduces an interesting lick, then stays there, repeating a phrase with no change except to get louder. The electric violin (Biff Blumfumgagnge) lends life and energy, but the keyboards (Massey and Daivd Adler) are too loud.

Opening night suffered from a few glitches. Most noticeable was the half hour intermission (likely due to a technical problem).

“Dracula” will likely undergo more changes as it enters the ballet's permanent repertoire. The story could be more clear, and a final duet between Harker and Mina ends the ballet like it was a love story.

Still, “Dracula” is a rocking good time, a serious ballet that never takes itself too seriously. With this dark, refreshingly original production, Smith has proven that his skills go far beyond sugarplums.

“Dracula” marks a movement toward the mature that has been a long time coming for the 30-year-old company.

With a pounding rock score, sensual, contemporary movement and an undead protagonist who preys upon the living, “Dracula” marks a movement tow…

New life for the undead at Madison Ballet

With edgy choreography and an electrical rock score, Earle Smith's "Dracula: A Rock Ballet" is not your average show from Madison Ballet.