Once Christmas trees just a month ago, hundreds of donated evergreens lie in curated heaps at Olbrich Park, smelling as fragrant as a lush pine forest and waiting to become art.

The trees are destined to be part of “How Lovely Are Thy Branches,” a public art installation now in progress at the 90-acre city park at 3527 Atwood Ave. Thoughtfully evaluated by a crew of volunteers for their freshness and aesthetics, most of the trees here will soon be “de-branched,” and their boughs interlaced with others as part of a large, spiral-shaped labyrinth taking shape on the January snow.

A row of flags strung between birches at the site entrance flutters in the wind. Trunks of former Christmas trees lie in neat stacks, ready for their role as part of the display.

“There’s a lot of magic here, and a lot of positive vibes,” said artist Lillian Sizemore, the snow crunching beneath her boots as she walked the worksite beneath a crystal blue sky.

“At this point, I’m feeling my way through the project. At some point, the trees tell me what to do.”

Set against the winter-whiteness of Lake Monona, “How Lovely Are Thy Branches” will open with a ceremony from 3 to 5:30 p.m. on Jan. 30. The event will include a food truck, remarks by Sizemore and a Glowing Hoop Procession through the labyrinth at around 4:30 p.m., half an hour before sunset. The installation will remain in place through February.

Sizemore, a mosaic artist and master gardener, conceived the idea of a temporary outdoor labyrinth and has been supervising its design and construction — with the help of crowdsourced trees and volunteer labor — since mid-January. The project was commissioned by the Madison Arts Commission’s BLINK program, which distributes about $10,000 a year in grants for temporary public art installations, said Karin Wolf, arts program administrator for the city of Madison. Sizemore’s project also received a matching grant through the Madison Community Foundation.

A labyrinth is not a maze but rather a single path that winds upon itself, quieting the mind in the process. In her BLINK grant application, Sizemore explained that she wanted to build a temporary labyrinth in a Madison park because of its powerful history.

“Cretan-style labyrinths are among the most ancient forms of land-art,” she wrote. “This ... design consists of a single pathway that loops back and forth to form seven circuits, bounded by eight walls, surrounding the central goal.”

“Labyrinths draw us into the center with balance and harmony,” Sizemore explained. “Walking the winding back-and-forth circuits has been scientifically proven to gently rock our neurological connections into a state of deep flow. In a labyrinth, there is no wrong way.”

The project will also include a social space — or outdoor “living room,” as Sizemore puts it — with hay-bale seating against a line of trees that create a wind break; a “tree museum” showcasing different varieties of evergreens; and, at the center of the labyrinth, a “moss mound,” where visitors can leave a small offering such as a stone, a twig, their “hopes and ideas for global cooling” or other remembrance.

The goal is to “extend and enrich the sensations of winter” while offering a place to walk, reflect and re-center, Sizemore said.

“It’s a way to get outside, be safe, do something fun — and meet your friends, or do it by yourself. There’s been a lot of families here, which makes me very happy,” she said.

And with Valentine’s Day coming up, “maybe there will be some lovers coming out” to walk the path. “That would be very sweet,” she said.

The artist applied for a $1,500 BLINK grant to cover expenses for her project more than a year and a half ago, and it took that long to figure out the logistics, she said. Working in a city park on such a large-scale installation meant “many, many permits and permissions to navigate.”

To Sizemore’s surprise, when city crews pick up discarded Christmas trees from the curb, the trees are immediately chipped, and would be not useful for her project. So beginning around New Year’s, Sizemore asked residents to deliver their own used Christmas trees — in one piece, but with decorations removed — to the site in person.

People showed up with trees on sleds, in wagons and in car trunks. Some arrived in pickup trucks with 10 or 12 trees that the drivers had rescued in their neighborhoods from the curb, she said.

The donations quickly added up to more than the 250 trees the artist was looking for, so Sizemore stopped accepting trees two weeks early.

My tree, your tree

Nearly 90 feet in diameter, the labyrinth is being built with interlaced branches, a symbolic image for our time, said Jennifer Bastian, the founder and director of Communication Madison, which served as the project’s fiscal sponsor.

It will “combine branches from my tree with the tree of someone who lives across town, and allow us to see something more whole than a tree at the side of the road after Christmas, awaiting trash pickup,” Bastian said in a statement. “We need every opportunity possible right now to imagine how to be together, and this gives us one rooted in community and environmental awareness.”

As she has helped sort and “de-branch” Christmas trees, Marti McLove, a volunteer who spent several winter afternoons on Sizemore’s crew, said she has answered questions for many curious onlookers.

“What I really enjoy is all the people it attracts, and explaining what the project is about,” McLove said. “It’s the kind of conversation that public art inspires.”

Professionally known as a “mosaic detective” for her investigative work as a mosaic historian, Sizemore herself generally works in mosaic, collage, watercolor and sculpture. The Indiana native also has experience as a florist, herbalist and garden designer, and earned her Wisconsin Master Gardener certificate while living in Madison in the early 1990s.

After a long stint in San Francisco and in London, where she did post-graduate research with a focus on geometry in mosaics at The Prince’s Foundation School of Traditional Arts, Sizemore moved back to Madison in 2017.

Her project in Olbrich Park is very much like a mosaic, Sizemore said, with “all the many pieces that have had to come together to make this artwork a reality.”

“From the trees themselves, to the growers, the families who chose them, enjoyed them, and brought them to the site, and all the volunteers who are helping to process the tree branches, build the installation, to the many city staff and other artists who I have coordinated with,” she said, “it’s really been an epic journey of community.”

As an arts and lifestyles reporter, I get to meet wonderfully creative -- and adventurous -- people and to tell their stories.

A tiny Madison nonprofit hopes to bring refugees to safety

The Memory Project's Ben Schumaker grows his "family" with efforts to bring an Afghan family to the United States.

Jim Wildeman's amazing Bubblemobile is a perennial hit at the Willy Street Parade. We took a look under the hood.

I love reading the letters we receive each year for Helping Hands. Hundreds of area schoolchildren reveal to us their dreams, their worries, a…

These people hiked every state park in Wisconsin

The early days of the pandemic were positive in one way: People headed outdoors in droves.

Summer memories from our readers

We asked readers to share their Madison memories of summers past. Their wonderful stories are here.

What: “How Lovely Are Thy Branches”

When: Open starting Sunday evening, Jan. 30, through the end of February

Opening ceremony: 3-5:30 p.m. Sunday, Jan. 30. Artist Lillian Sizemore will speak at 4:15 p.m., followed by a Glowing Hoop Procession at 4:30, where Danielle Lee of Hoop Elation and others will enter the labyrinth with glowing LED Hoops and "circle the circle" as the sun sets. Visitors will be invited to walk the labyrinth after the procession. Visitors are encouraged to bring their own hoops, glow sticks, LED candles, solar lamps, flashlights and head lamps (no open flames), and are asked to wear masks and adhere to COVID-19 protocols. A food truck from Taco Local will be on site.

Over the past decade nearly 20 labyrinths have sprung up in and around Madison, part of a growing movement to counter modern-day stresses with an ancient and mysterious tool.

"46 Artists for America's First Ladies," on exhibit soon at Madison's Central Library, is both history lesson and artistic adventure.

Dale Sticha, who's seen arts education campuses around the world thanks to his job touring with Elton John, wants to bring the concept to Madison.

Skate, run, walk, hike, fish – these winter festivals have it all

Mark your calendar with loads of fun, free snowy celebrations.

Hundreds turn out for opening of labyrinth at Olbrich Park

Hundreds turn out for the "magical labyrinth experience" during outdoor Sunday ceremony.

45 years ago today, Elvis Presley died of a heart attack 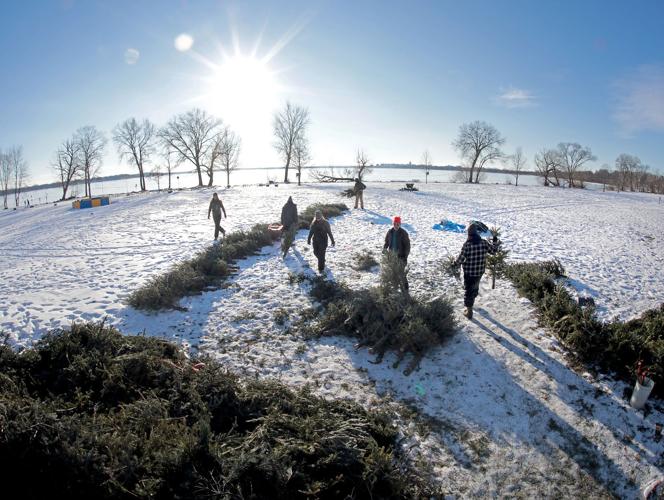 Volunteers began to assemble Lillian Sizemore’s environmental art installation, “How Lovely Are Thy Branches,” at Olbrich Park last weekend. The outdoor labyrinth built from crowdsourced evergreens will open to the public Jan. 30. 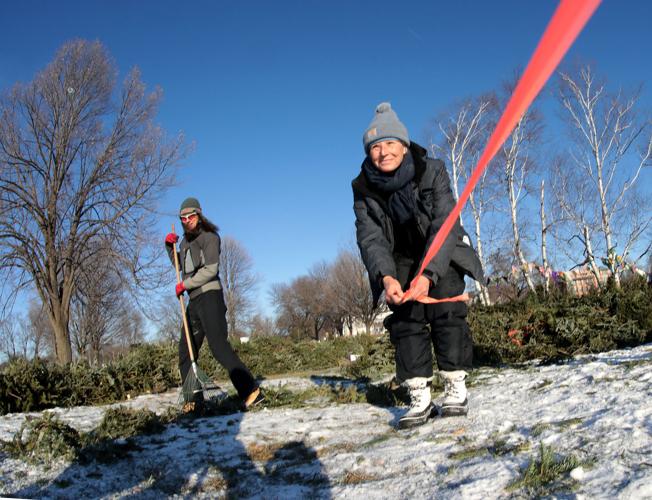 Artist Lillian Sizemore stretches a ribbon as she lays out a path leading to the labyrinth she is building from Christmas tree branches at Olbrich Park on Madison's East Side. 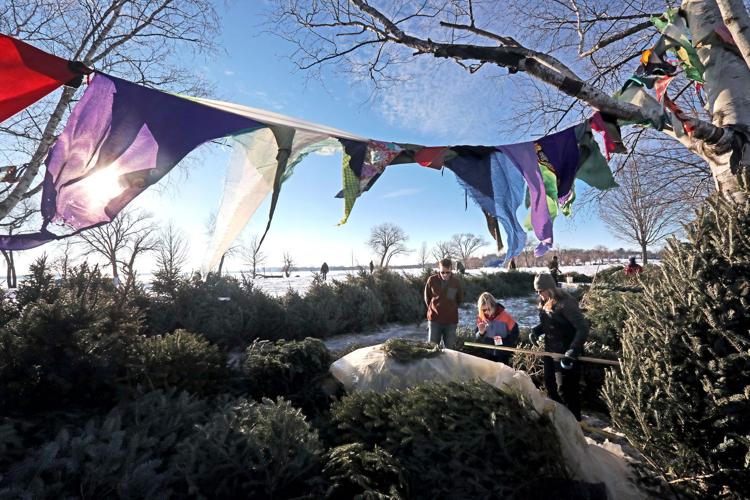 Fabric banners mark the entrance to Lillian Sizemore’s public art installation, “How Lovely Are Thy Branches,” at Olbrich Park. Part of the city’s BLINK public art program, the temporary installation will run through February. 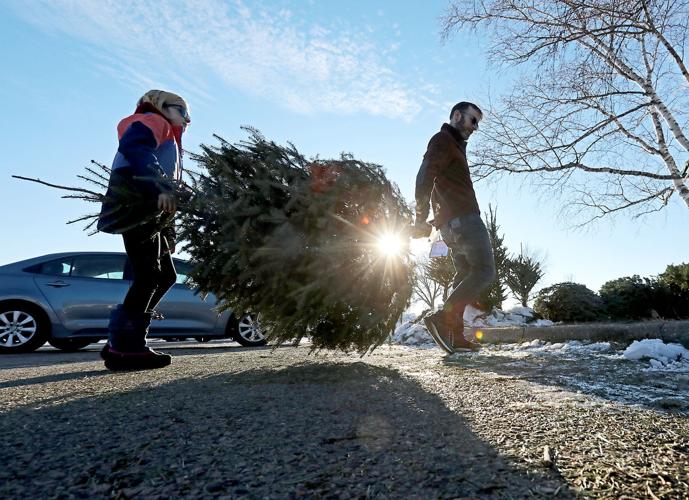 Adam Hirsch and his daughter, Sydney, 9, donate their Christmas tree for the environmental art installation. Christmas trees are no longer being accepted at the site. 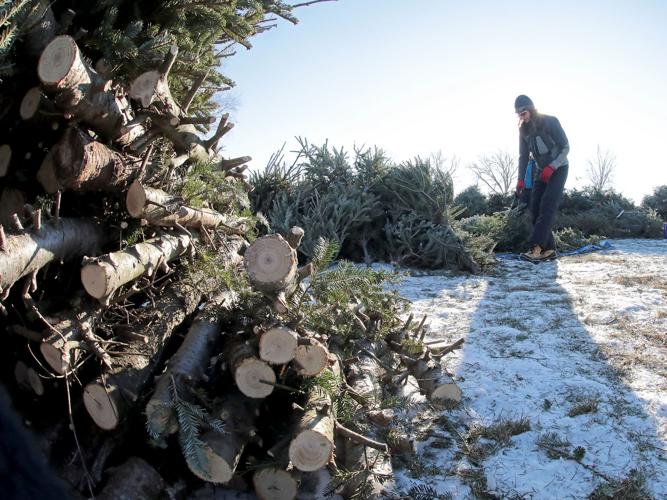 A volunteer sorts branches from Christmas trees to be used for the artistic endeavor. 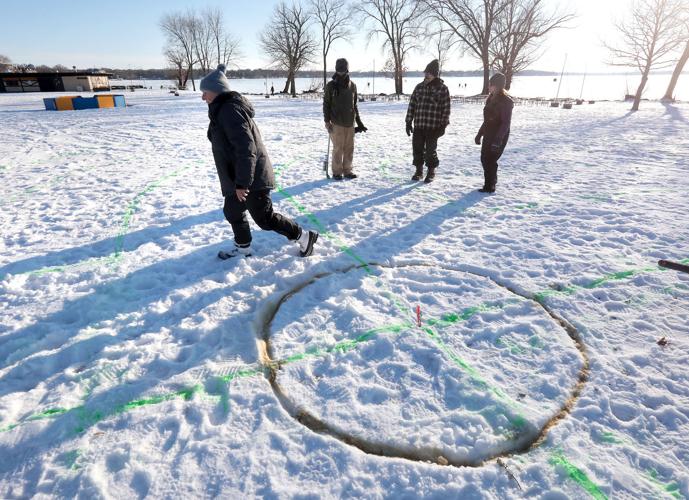 Painted circles in the snow mark the center of Lillian Sizemore’s labyrinth. 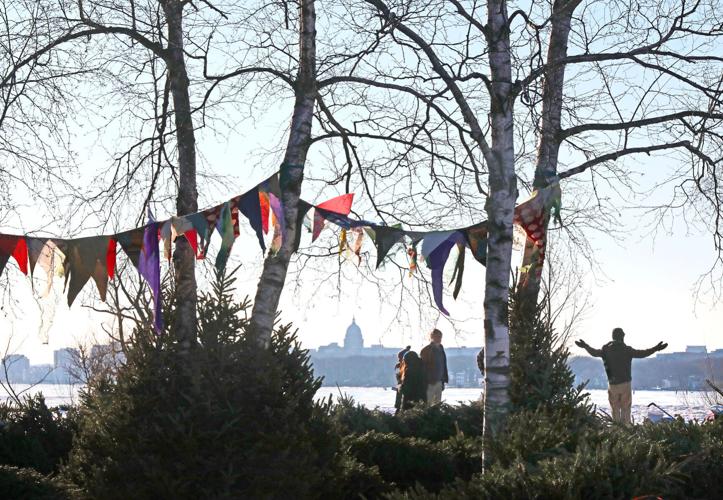 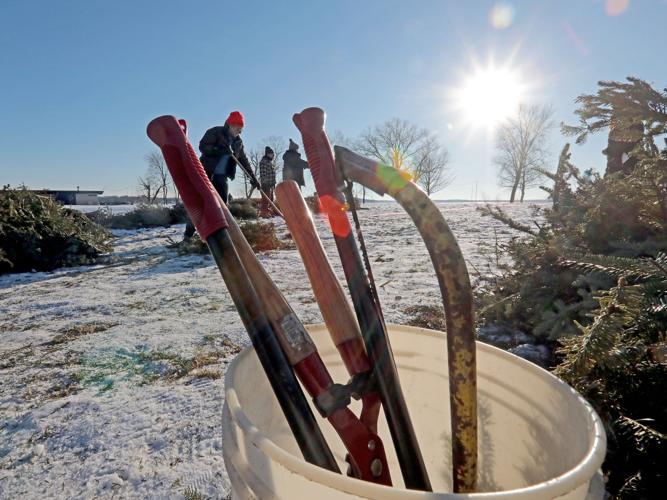 Hand tools used to trim tree branches share a bucket at the site.