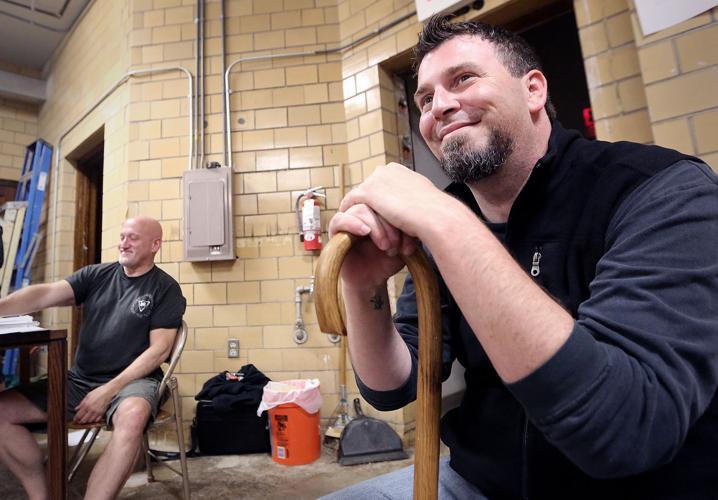 Playwright Dan Myers said that he gained most of his knowledge of musical theatre from his wife Jessica Jane Witham who is cast as Kitty in "Alice" -- the role he wrote especially for her. 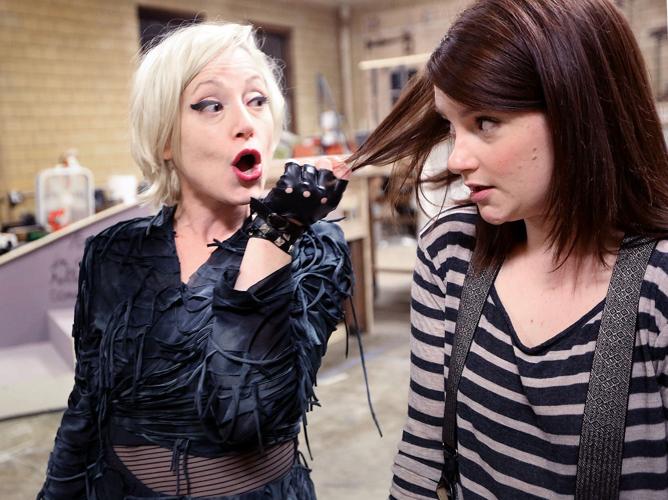 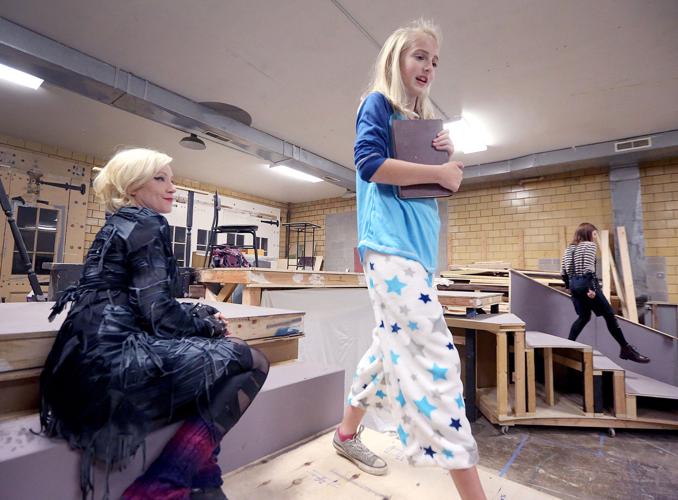 Playwright Dan Myers and director Jim Chiolino said that they were so enamored with Ingrid Ebeling's singing voice at auditions that Myers and co-writer Meghan Rose wrote two new songs so Ebeling, center, would have the chance to sing. 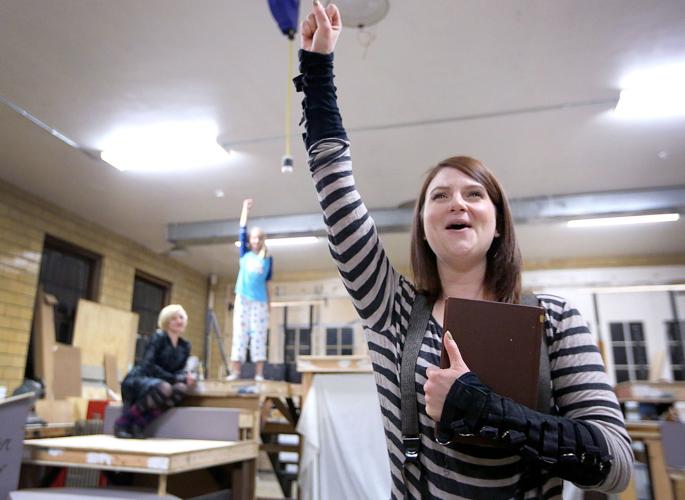 Katie Debs, who plays Alice, said the chance to create a role in a new work is exciting and "what's really appealing about Alice is her curiosity that can be understood in so many different ways." 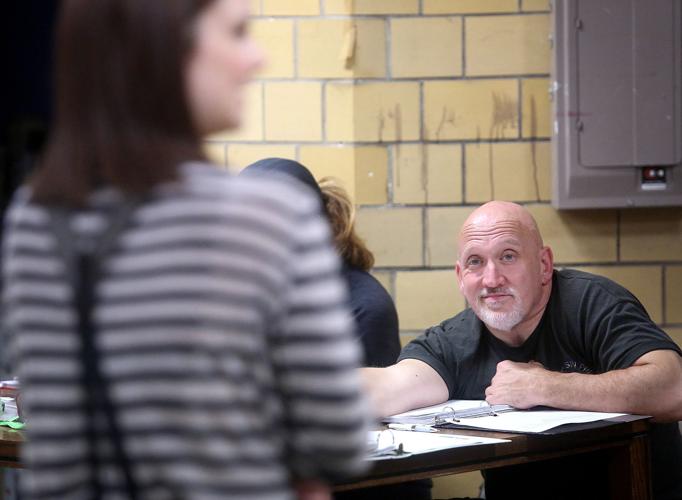 Director and Madison Theatre Guild president Jim Chiolino said he loved the script for "Alice" as soon as he read it and he was determined to get the show approved for a special event with MTG.

Myers, 43, co-wrote a rock version of ‘Alice in Wonderland’ in which Alice loses her mother to a devastating fire in her childhood home and just weeks before the show was set to open, Myers’ home was significantly damaged by fire.

“It was the universe telling us to clean out the house,” Myers said.

While Myers, his wife Jessica Jane Witham and their seven pets were unharmed in the blaze, they lost some items of considerable value including Myers’ photo lighting equipment and Harley Davidson motorcycle.

The household will be displaced for probably six months since parts of the home are too damaged to be saved, Myers said.

But, without bodily injury to anyone in the family, there is hope in the wake of the blaze.

“There is opportunity for us to rise from the ashes,” Myers said. “I could sit around and be all ‘oh woe is me’ or I could suck it up and say this is my new human experience. This is my new life—let’s find out what I can do with it.”

What Myers does with his life is multi-fold. The playwright, actor, singer, musician, network engineer and photographer appears to be quite busy.

Especially in the last two years when he has written four full-length plays, a monologue and the musical, which have all been produced.

Myers’ sixth show to be produced, “Alice”, is being done by Madison Theatre Guild which hasn’t done an original musical in at least 20 years, MTG president Jim Chiolino said.

“Alice” was a concept Myers concocted about four years ago after returning from the New York International Fringe Festival where he performed in the zombie musical “Love Death Brains.”

The inspiration for a show based on “Alice in Wonderland” came while shooting ballet photography, he said.

American McGee is a game designer best known for his macabre version of “Alice in Wonderland” in which one of the lands is largely wallpapered in checkerboard patterns.

Myers then called Meghan Rose, who wrote the music for “Love Death Brains”, to collaborate.

“Alice” is Rose’s fourth full length musical and the first time she hasn’t done the musical direction since she moved to New York City in May.

Myers has only been a part of the theater world since 2009 and the only musical he had seen at that point was a filmed version of “Sweeney Todd” starring Angela Lansbury.

“‘Love Death Brains’ gave me the inspiration to think that the boundaries (for musicals) weren’t as narrow as ‘Oklahoma,’” he said.

What Myers was looking for was a musical that suited his particular taste for heavier music styles.

As a member of a few bands for the last 20 years — including Cyanide Ester, a Wisconsin Area Music Industry Award Heavy Metal Artist of the Year nominee in 1997 — Myers knows how to appeal to a rock and metal audience.

Myers’ desire to write a musical with heavier music made the partnership with Rose perfect since Rose doesn’t compose music for the typical high-soaring sopranos found in traditional musical theater.

“The songs are written in a powerful range,” she said.

A range fitting for the show’s title character, who deviates from the Disney version.

The Disney Alice was very passive and didn’t take a very active role in what was happening around her, Rose said.

So, Myers and Rose set out to make Alice a more dynamic character.

In “Alice,” the namesake character escapes to an imaginary land that she and her mother created before she died. The land, when Alice was young, served as a means to conquer her fears. Now the fears are back and teenage Alice must find a way to stand up for herself in order to defeat them.

The shift to a more compelling Alice in this musical appears to be a nod to the original character who is vastly different from her animated counterpart.

“Alice was a radical departure from other children in children’s books,” Mark Burstein, president emeritus of The Lewis Carroll Society of North America, said in an email. “She is self-sufficient, questioning of authority, unfazed by anything that happened or was said to her and became a strong role model for the independent woman. Up to that time, children were obedient, passive creatures.”

According to Burstein, Carroll’s “Alice” is the most quoted work of fiction ever and, because the text can be interpreted in so many ways, it’s extremely relatable.

The relatability of “Alice” is something that Chiolino, the show’s director, knows all too well.

“I think the appeal is that it means a lot to a lot of people,” he said. “I have a master’s degree and a law degree and every paper I wrote started with a quote from ‘Alice in Wonderland’ (and ‘Through the Looking-Glass’). You can find stuff in there about anything.”

For Myers, “Alice” offers an opportunity far beyond the chance to retell a beloved story or teach kids to stand up against bullies.

It’s perhaps his last chance to perform on stage — something he has done in various capacities for more than half of his life.

Eighteen months ago, Myers was diagnosed with muscular sclerosis, which he said he has probably had for the last ten years with intermittent symptoms.

Despite the physical difficulty, Myers wanted to be a part of the cast. So, he was cast as The Worm — a small and villainous role.

“I love being the bad guy,” he said. “It allows me to dig into this cornucopia of loss and suffering that I have and allows me to explore a side of me that I am not.”

In addition to the role, Myers also designed the set and worked with the crew to build it.

“I’ve got probably 80 hours into building the set,” he said. “A third of them was spent laying on the couch trying to recuperate watching other people do what I used to love to do.”

Rehearsals and the work involved in putting up the show are exhausting for Myers, not simply because of the physical pain, but because of the fatigue that plagues MS sufferers.

He described his energy level previously as “a two liter that takes five minutes to refresh every couple of hours” and his current energy level as “a Dixie cup with a pin hole in the bottom of it that takes hours to fill.”

Myers said it’s “a bitter pill to swallow” knowing that he may not be able to perform after “Alice”, but that won’t keep him from writing.

“If the human experience is what we leave behind, while I’m capable of doing it, I want to leave behind something,” he said. “What I hope is that people remember me for my words. That something I have written will make a difference in someone else’s life.”

Though unable to provide more details, Myers has been contacted to write both an original opera as well as an original play for two unnamed companies.

“I can’t do some of the things I used to do, but I can earn my seat at the table,” he said. “I can earn it by writing. I can earn it by creating new worlds for someone else to inhabit. I’m not even close to done.”

What: "Alice" by Madison Theatre Guild

Tickets can be purchased by calling 608-661-9696 or visiting the Bartell Theatre website at bartelltheatre.org

Oregon's 'Tin Man' is home to a new art center

The artist-run nonprofit 14 South Artists will host an open house Saturday in the historic building it now calls home.

'Between Spaces' a place for social healing, wellness and self-reflection

Great River Sound concertgoers will have the opportunity to see Tom Wopat of Dukes of Hazzard fame and the iconic General Lee at Dash-Park in Onalaska.

As an only child with devoted parents, artist and interior designer Anastasiya Chepil Craig, who often goes by "Nastia," recalls her childhood in Ukraine, fondly.

Playwright Dan Myers said that he gained most of his knowledge of musical theatre from his wife Jessica Jane Witham who is cast as Kitty in "Alice" -- the role he wrote especially for her.

Playwright Dan Myers and director Jim Chiolino said that they were so enamored with Ingrid Ebeling's singing voice at auditions that Myers and co-writer Meghan Rose wrote two new songs so Ebeling, center, would have the chance to sing.

Katie Debs, who plays Alice, said the chance to create a role in a new work is exciting and "what's really appealing about Alice is her curiosity that can be understood in so many different ways."

Director and Madison Theatre Guild president Jim Chiolino said he loved the script for "Alice" as soon as he read it and he was determined to get the show approved for a special event with MTG.