When Lorraine Ortner-Blake’s mother got married in 1952, her parents gave her a memorable wedding gift: 400 baby chicks.

Over the years, the chickens grew and that family story became such a precious one that Ortner-Blake, the sixth of 14 children raised on a Wisconsin dairy farm, decided to record it in a special way — in a painting.

Titled “Dad Gave Us 400 Baby Chicks for Our Wedding,” the artwork is among 52 pieces in the two-woman exhibit “Long Time Passing,” now on tour across the Midwest. Along with that of fellow Portage-area artist Roberta Condon, Ortner-Blake’s work in “Long Time Passing” offers a rich, multidimensional and beautifully rendered look back at the Wisconsin family farm.

“This piece of heritage is changing. And the landscape is changing,” said Condon, whose pastel paintings in “Long Time Passing” evoke the seasonal colors and moods of small farms on back roads.

On hikes over the years, camera in hand, she has witnessed many of them give way to consolidation, development or financial struggles.

“Some of these bucolic scenes that I wanted to paint are no longer available” and have simply vanished, Condon said. “I actually had to invent some of these images to illustrate from my mind. I couldn’t photograph them any longer.”

Most of the works in “Long Time Passing” were created by Condon and Ortner-Blake during a year of pandemic isolation, when life as usual ground to a halt because of COVID-19 and both had more time to focus on their art.

The two had been friends for a while. Condon and Ortner-Blake, both long-distance open-water swimmers, would run into each other often at 7 a.m. on the shores of Portage’s Silver Lake. And both belonged to a group of artists and crafters who, pre-COVID, regularly gathered at the public library to work on projects and chat.

It was at one of those library sessions that the two women discovered they were both working on a series of farm paintings — though in very different styles, with different goals in mind. Ortner-Blake’s were scenes from her mother’s past and her farm-girl childhood in the 1960s and ’70s. Condon’s more abstract works involved striking colors and radiant views of the rural landscape.

As the idea for “Long Time Passing” took shape, they learned that their skill sets greatly complemented one another’s.

“Roberta has vision. She sees big things,” said Ortner-Blake, 60, a UW-Madison graduate who is also a graphic artist. “She’s got the idea; I think about the steps to get there.”

When she started her farm paintings, for example, Ortner-Blake was recording family memories, mainly for her 90-year-old mother, Marilyn. But once Condon — a former engineer and now a gallery owner in downtown Portage — took a look at them, “She saw them as the beginning of something important. And she made me think it’s important to pursue this,” Ortner-Blake said.

“I was a farm girl. My brothers still run the farm with their adult sons. My mother lives within view of the farm,” she said. “She has stories from her childhood, her farm girl childhood, that are becoming more prevalent in her memory. So I’ve been reveling in those stories.”

Yet there are very few photographs from her mother’s younger years in the 1930s, ’40s and ’50s. In turning those stories into paintings and illustrations, “it became kind of a record of the change in how we farm,” Ortner-Blake said.

During their weekly COVID-era family get-togethers over Zoom, many of her siblings also began to share memories, which likewise found their way into her paintings: helping birth a calf, pulling mustard.

“I got to hear what they remembered of being in an icy hay mow on a dark winter night,” she said. “Or how they recalled picking peas and eating them rather than bringing them to the house.”

One sister described how she raced to the school bus each morning through the orchard, plucking an apple on the way to add to her lunch.

The exhibit “Long Time Passing” already has made stops in Wisconsin and Illinois. It’s scheduled to travel to nine more venues, including in Minnesota and Iowa, and will return to the Madison area over the next two years.

Some of Condon’s work is also currently on display in Madison in her solo show “American Pastoral,” running through Dec. 30 at The Garver Gallery, 18 S. Bedford St.

Two books came out of “Long Time Passing” as well.

“We Always Had Chickens: Paintings and Memories” is a collection of farm family memories plus Ortner-Blake’s paintings. Through pictures and brief, charming tales, the book recalls sewing rag rugs from threadbare hand-me-downs, filling a big crock in the cellar with sauerkraut, and tossing watermelons in the swimming pool on Independence Day to keep them cool.

Condon’s book, titled “Agriculture All Around, Agriculture Run Aground,” is subtitled “An Alphabetic Primer on the Loss of the Family Farm.” The title comes from the alphabet book “Alligators All Around” by Condon’s favorite childhood author, Maurice Sendak.

“Agriculture All Around” features 26 of Condon’s paintings, one for each letter of the alphabet – but with paired titles that are intentionally jarring. (In Condon’s book the letter F, for example, stands for “Fences and Furrows” as well as “Financial Failures”; S is for both “Silhouetted Silos” and “Spiking Suicides.”)

The book includes a list of 26 ways to help small farmers, such as “buy meat in bulk from a local farmer” or “volunteer at a small farm.”

A self-taught painter, Condon, 64, grew up in the countryside of northern Illinois, living first in and then near a farmhouse along the Fox River that was in the family for four generations.

“During my grandfather’s life, I had to watch that land as I was growing up be chopped away and subdivided out into little houses. And that’s how he made his retirement,” Condon said. At the same time, “I was hearing on the news about the many reasons farmers were going out of business.”

So in her contributions to “Long Time Passing,” “I didn’t feel that I could just paint the beauty. I felt that I had to tell both sides,” Condon said. “There’s kind of a sad underbelly to it all, so I had to talk about that as well. We always learn things the hard way. We don’t notice things until they’re gone, unfortunately.”

When she spoke at one of the gallery openings for “Long Time Passing” this fall, Condon said she was struck by the diverse crowd – including “an 80-year-old farmer, clearly from the other side of the political aisle,” who came to hear her artist’s talk.

“He came up to me afterwards and started talking to me about some of the things that had happened to him. And he wanted a copy of the book,” Condon said. “He was pleased that somebody cared. So to me, (the exhibit) has been a great success in that way of art reaching out to people.”

Ortner-Blake also gets feedback at openings for “Long Time Passing,” she said. Most are full of “joyful remembrance,” as people look at her 11-inch-square paintings and “say things like, ‘I lived that,’ or ‘I remember that outhouse,’ or ‘I had to pick up the chicken heads after we butchered them,’” she said. Many remark, “’I haven’t thought about that (farm memory) for years.’”

“When people react with Lorraine’s paintings, they go right up to the painting and pick out all these little details going on in the painting,” said Condon, some of whose own works measure more than three feet wide. “When they view my paintings, they stand back and they look at the big picture. So it’s a great combination, and they complement each other.”

Over the next two years, the exhibit “Long Time Passing” will travel to nine venues across the Midwest, including these in Wisconsin:

More information: For more information on the artists or their books, visit their websites, wealwayshadchickens.com and www.robertacondon.com

In her book of paintings “Agriculture All Around, Agriculture Run Aground,” artist Roberta Condon lists 26 ways to help small farmers in the community. The top six:

1. Shop at your local farmer’s market or purchase a CSA share.

2. Volunteer at a farmer’s market.

4. Get to know your local farmer and thank them when you buy their food. The more respect farming gets as a profession, the more youth will be drawn to the field.

6. Help establish a relationship between local farmers and your school.

Watch now: 20,000 Luke Bryan fans in a cornfield? For the Statz Bros. that's their kind of night

Luke Bryan returns to the Madison area next week on his 2021 Farm Tour.

A Madison-based art project becomes a lifeline for a family fleeing Afghanistan. 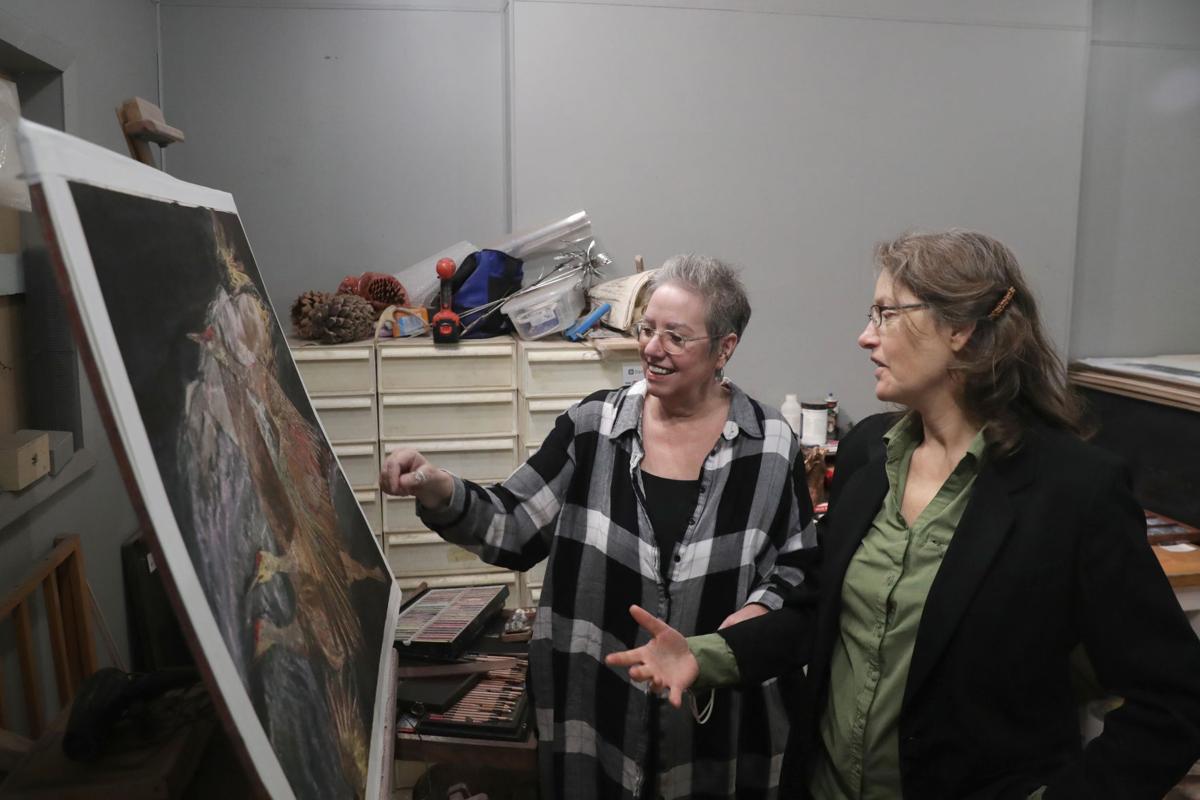 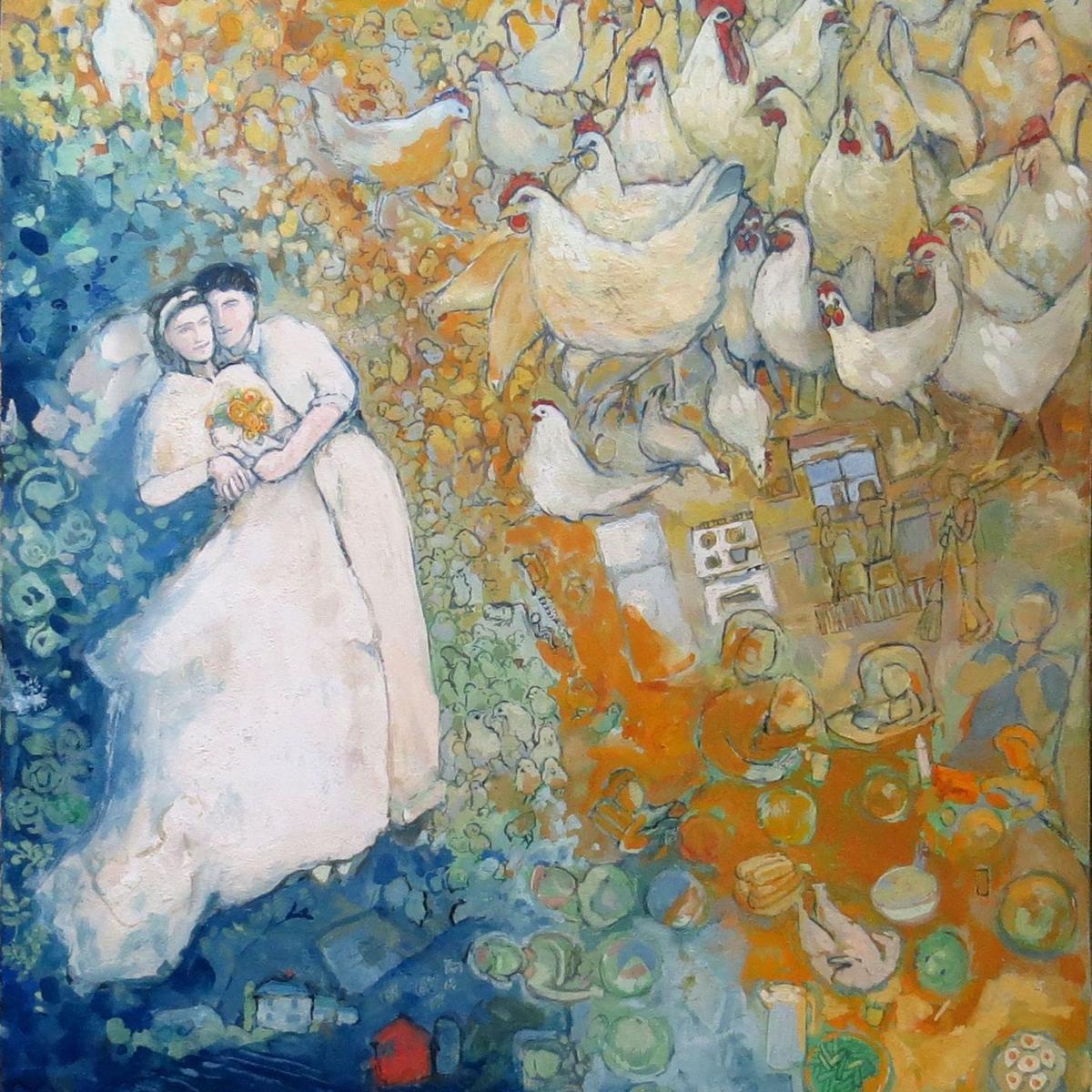 Lorraine Ortner-Blake's painting "Dad Gave Us 400 Baby Chicks for Our Wedding" was inspired by a story from her mother, Marilyn. 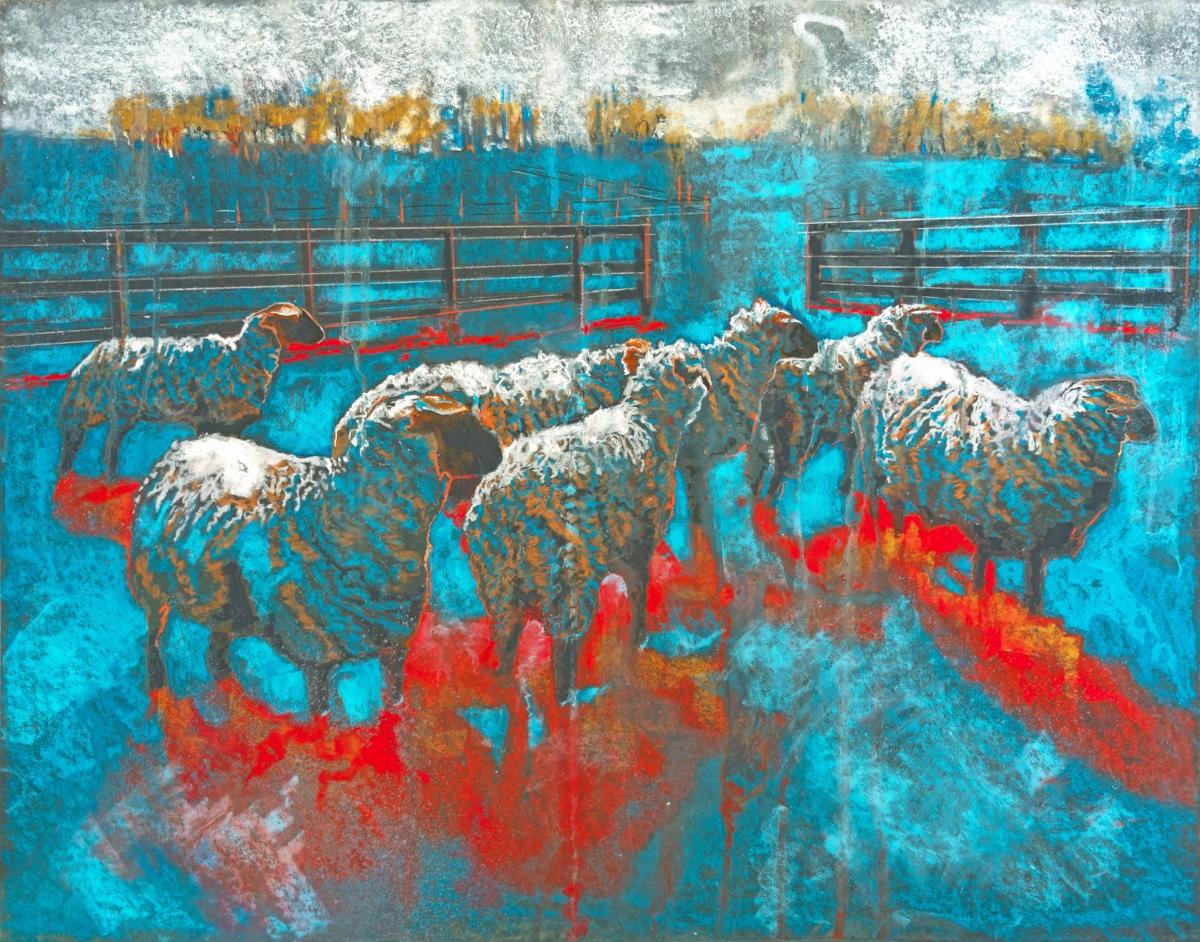 Roberta Condon created the pastel "American Pastoral 12" as part of a series of works inspired by Wisconsin's changing farm landscape. 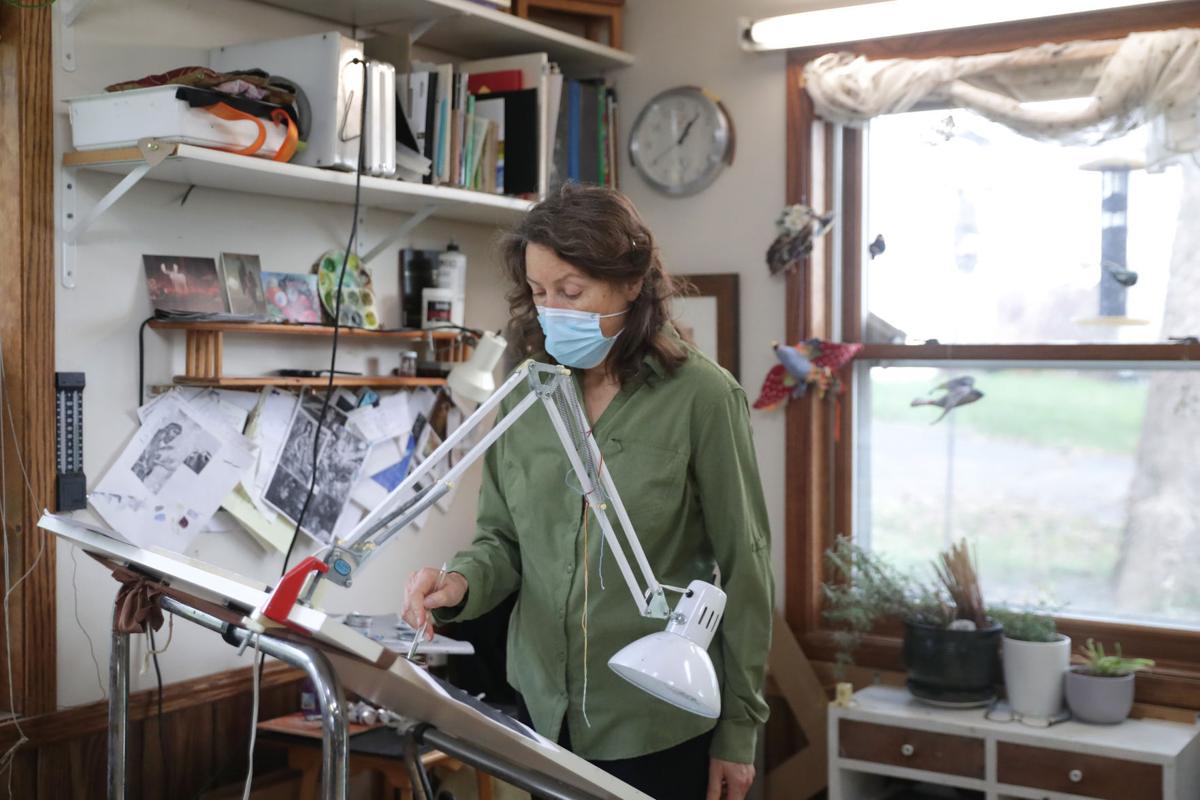 Lorraine Ortner-Blake works on a painting for a second two-woman show with Roberta Condon, in her studio outside Portage. 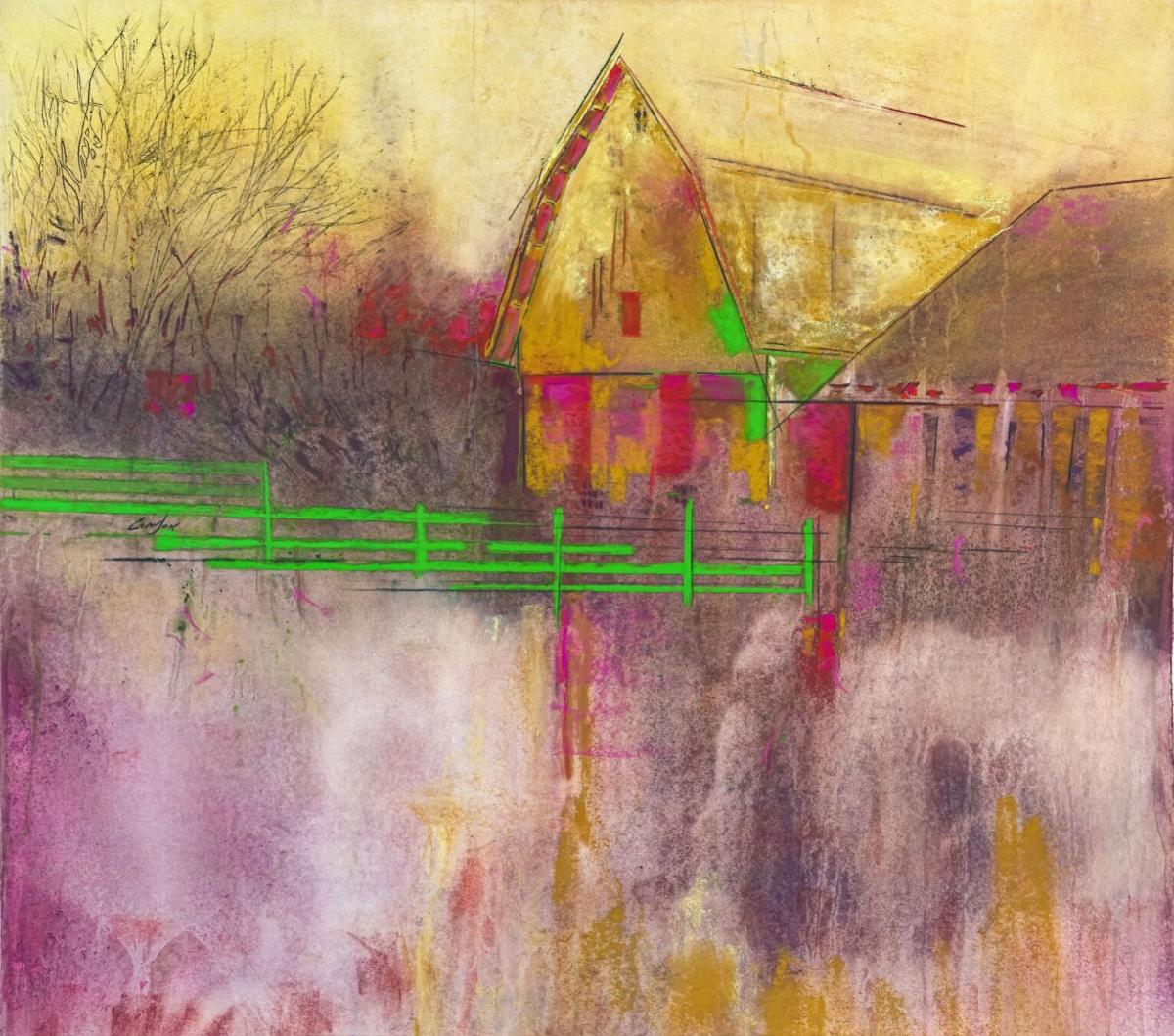 Roberta Condon's affection for the rural landscape, shown here in her pastel painting "American Pastoral 3," dates to her childhood growing up in the country. 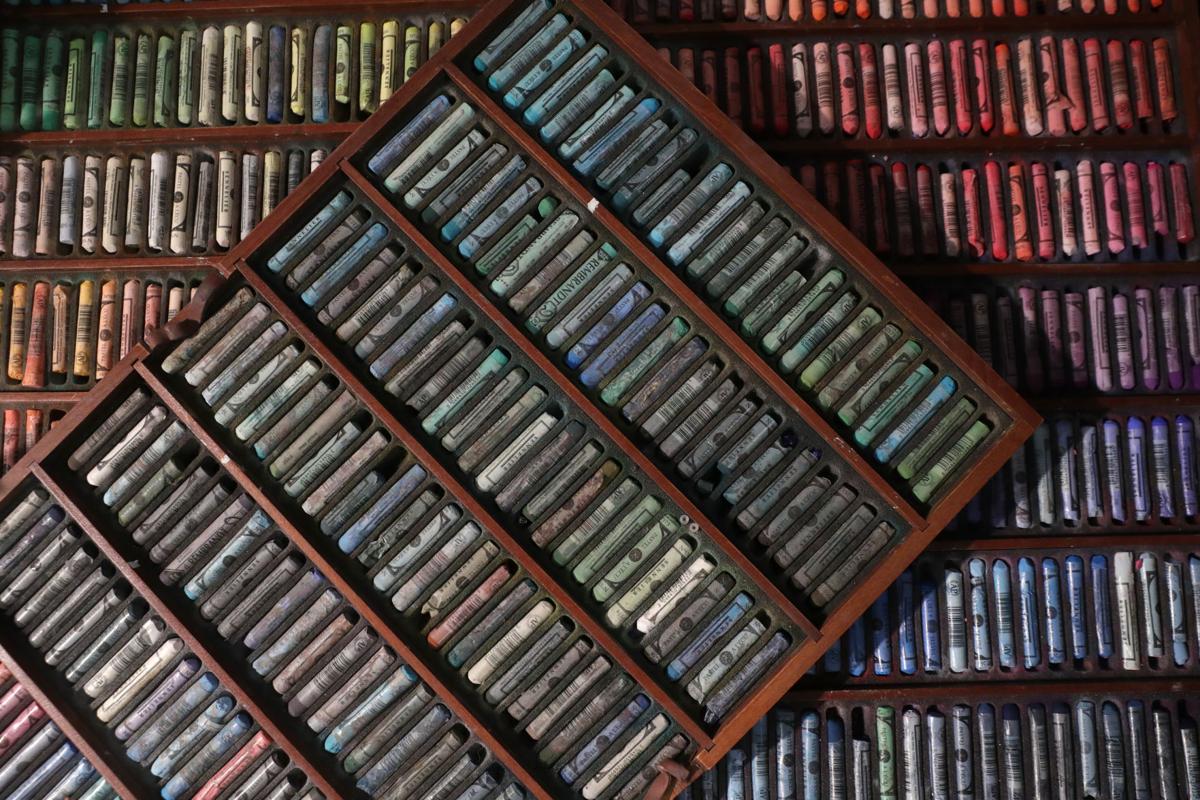 Roberta Condon's studio is filled with trays of pastels that she uses in her work. 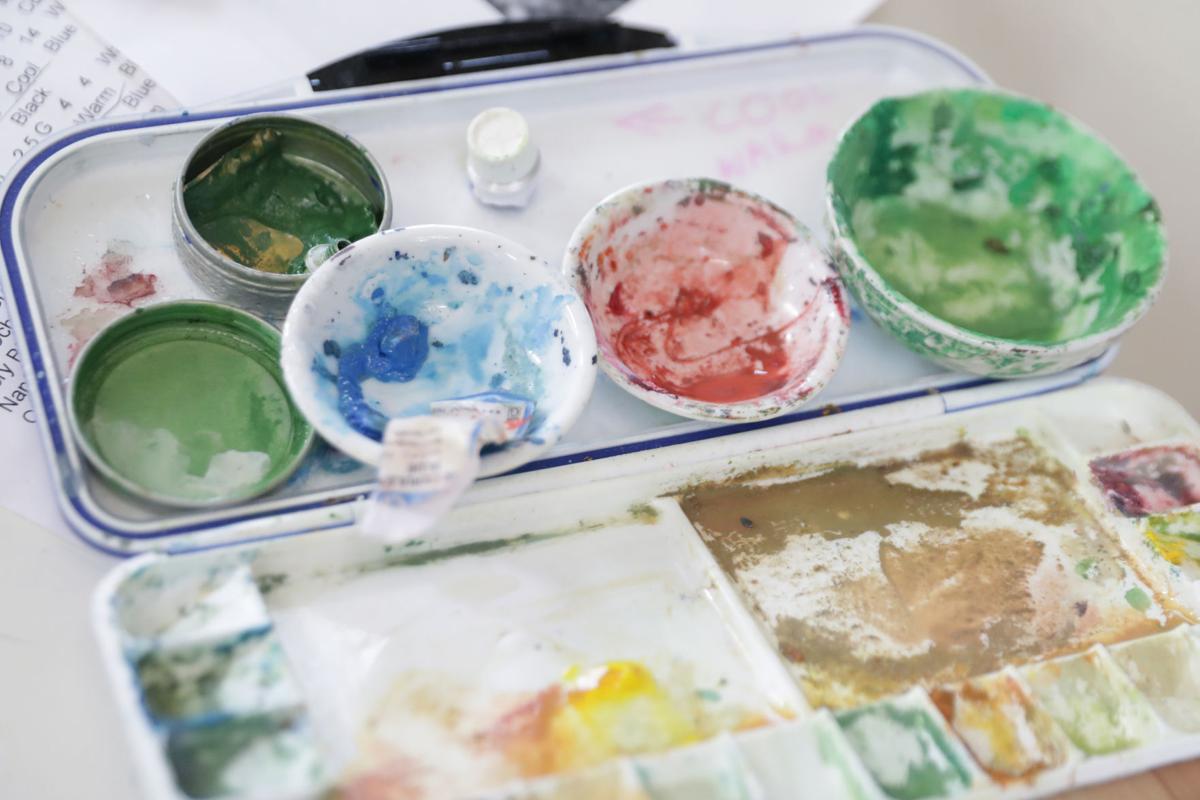 A palette of opaque watercolor, or gouache, paints rests on Lorraine Ortner-Blake's desk at her studio. 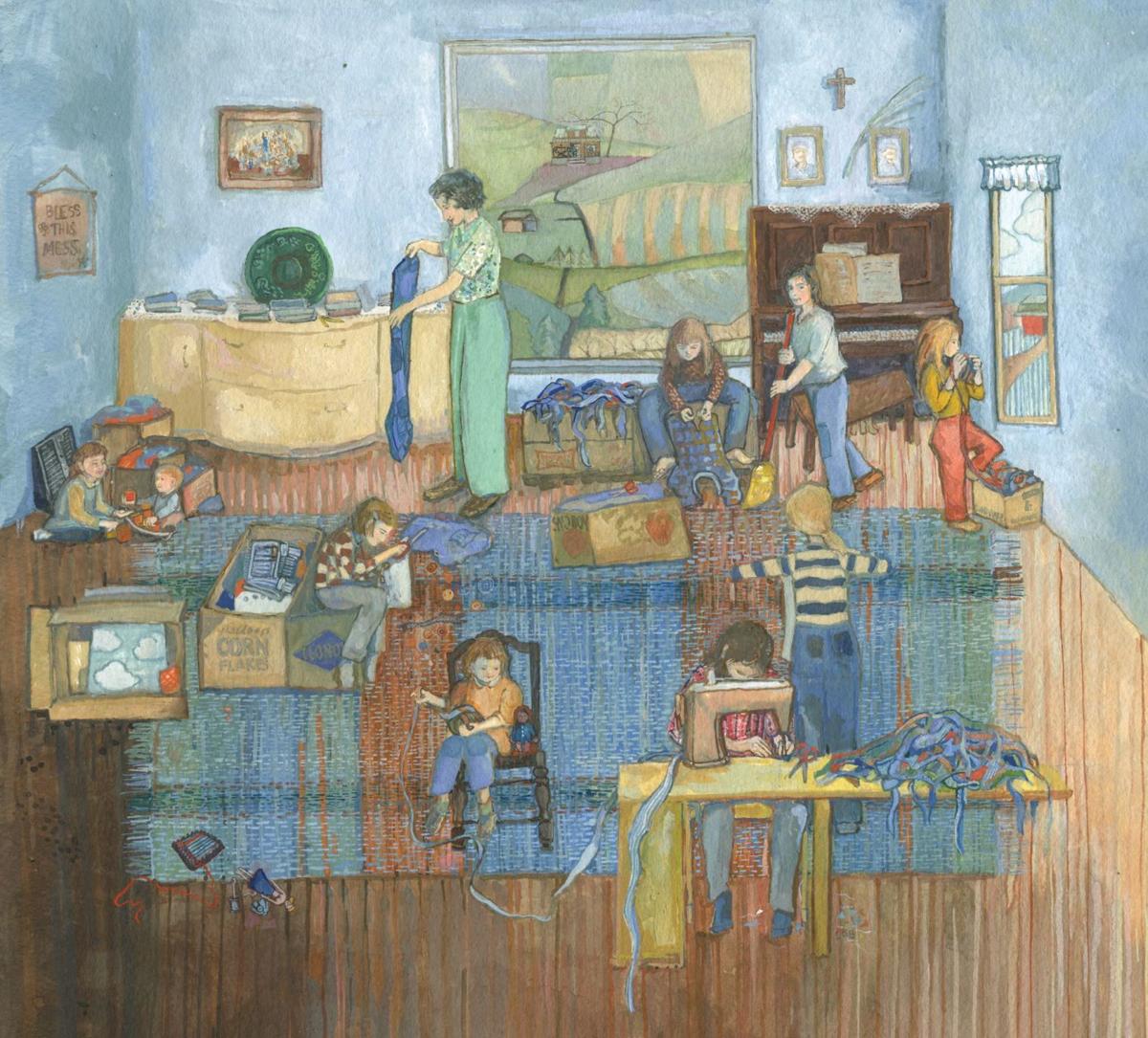 Many of Lorraine Ortner-Blake's paintings recall growing up in a large family on a Wisconsin dairy farm, such as this one titled "Turning Rags into Rugs." 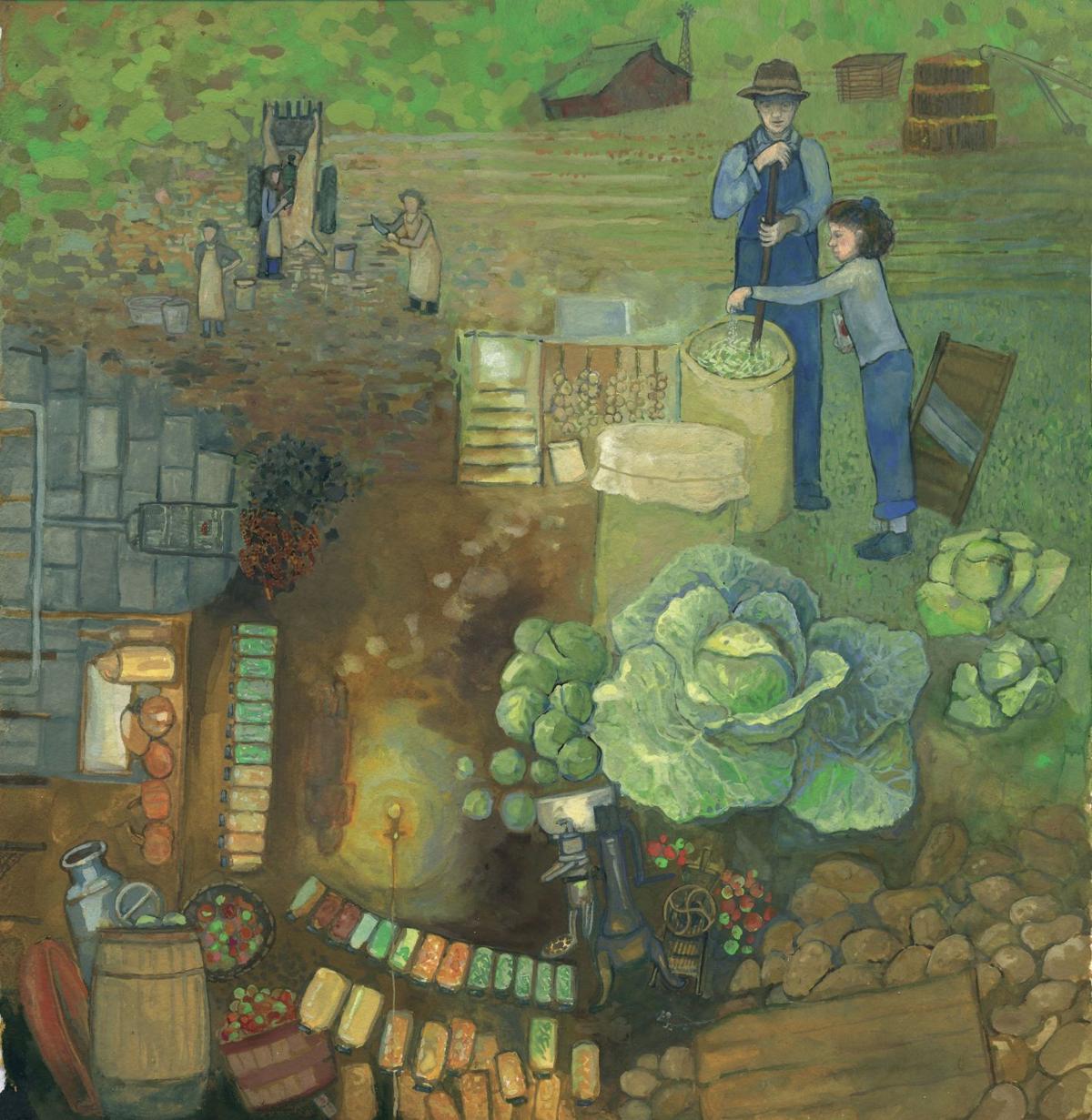 "Making Sauerkraut" by Lorraine Ortner-Blake is based on the childhood memories of her mother, Marilyn. 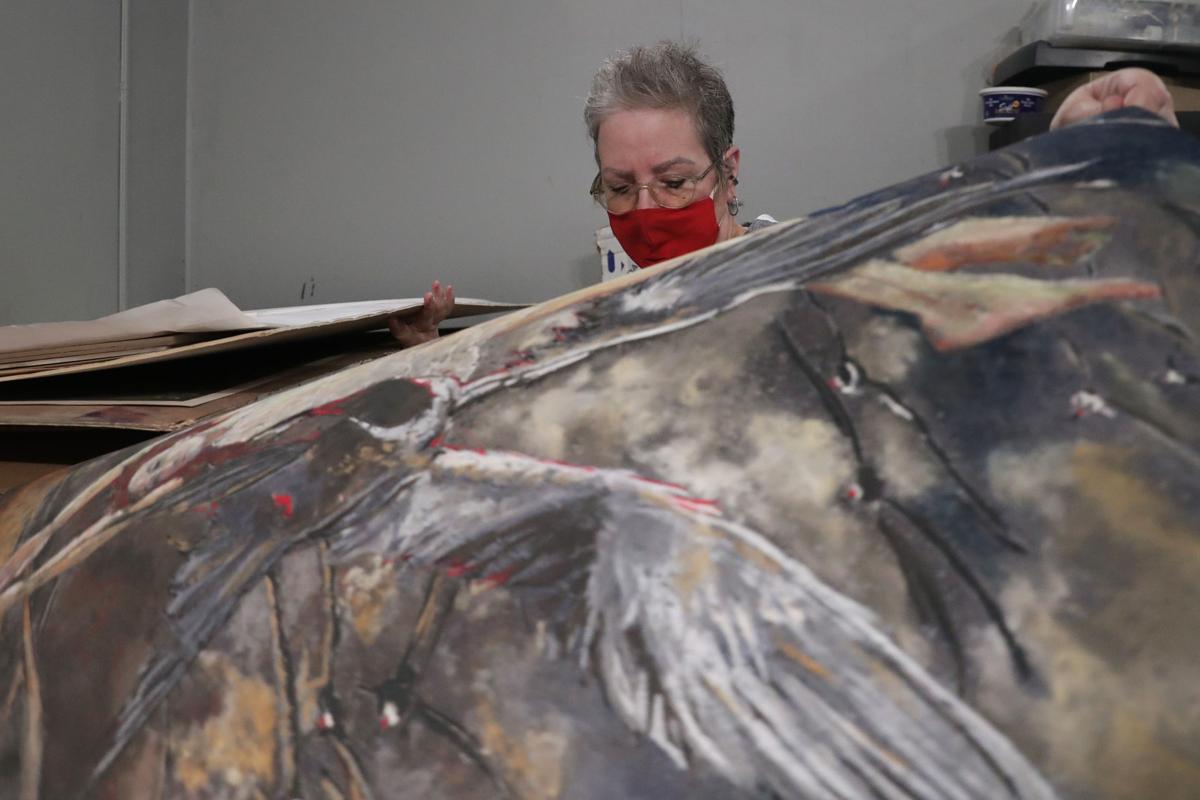 Artist Roberta Condon lifts a recent painting she made in her Portage studio. 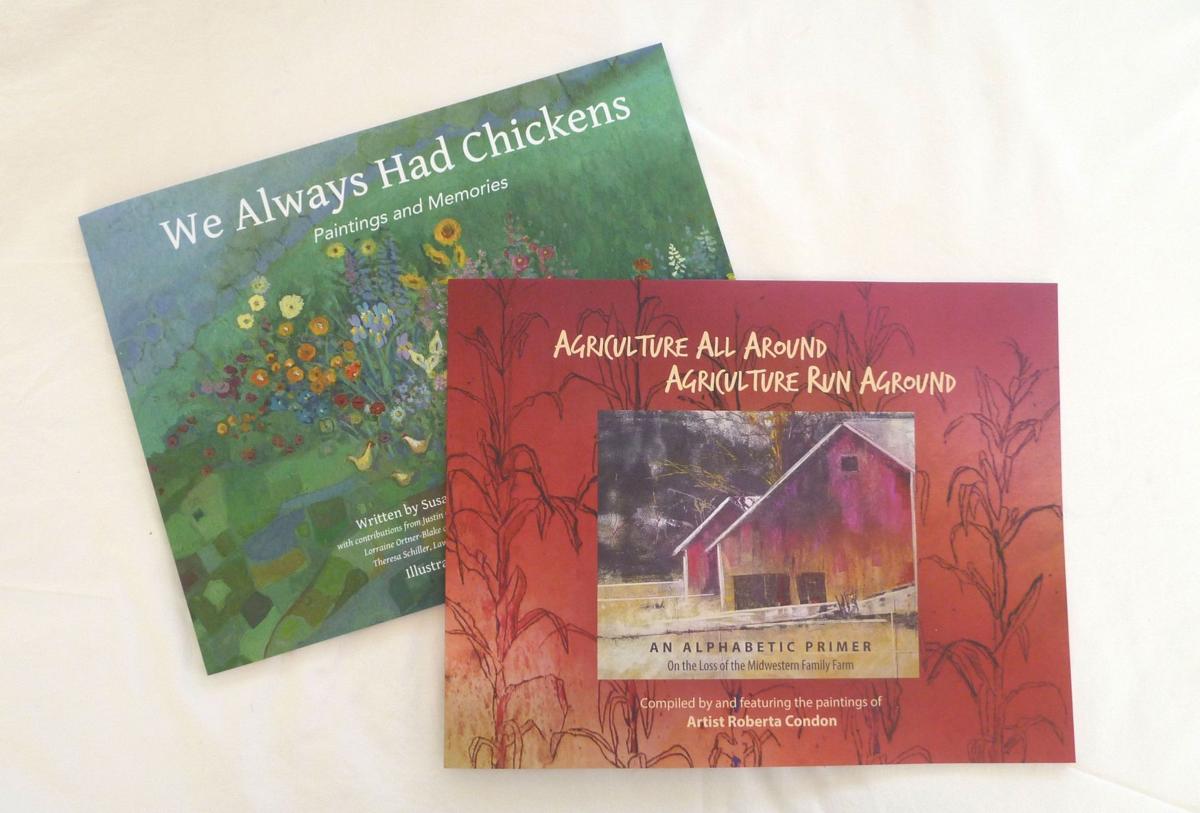 Paintings and stories from the two-woman art exhibit "Long Time Passing" were turned into the books "We Always Had Chickens," illustrated by Lorraine Ortner-Blake, and "Agriculture All Around, Agriculture Run Aground," featuring the paintings of Roberta Condon. 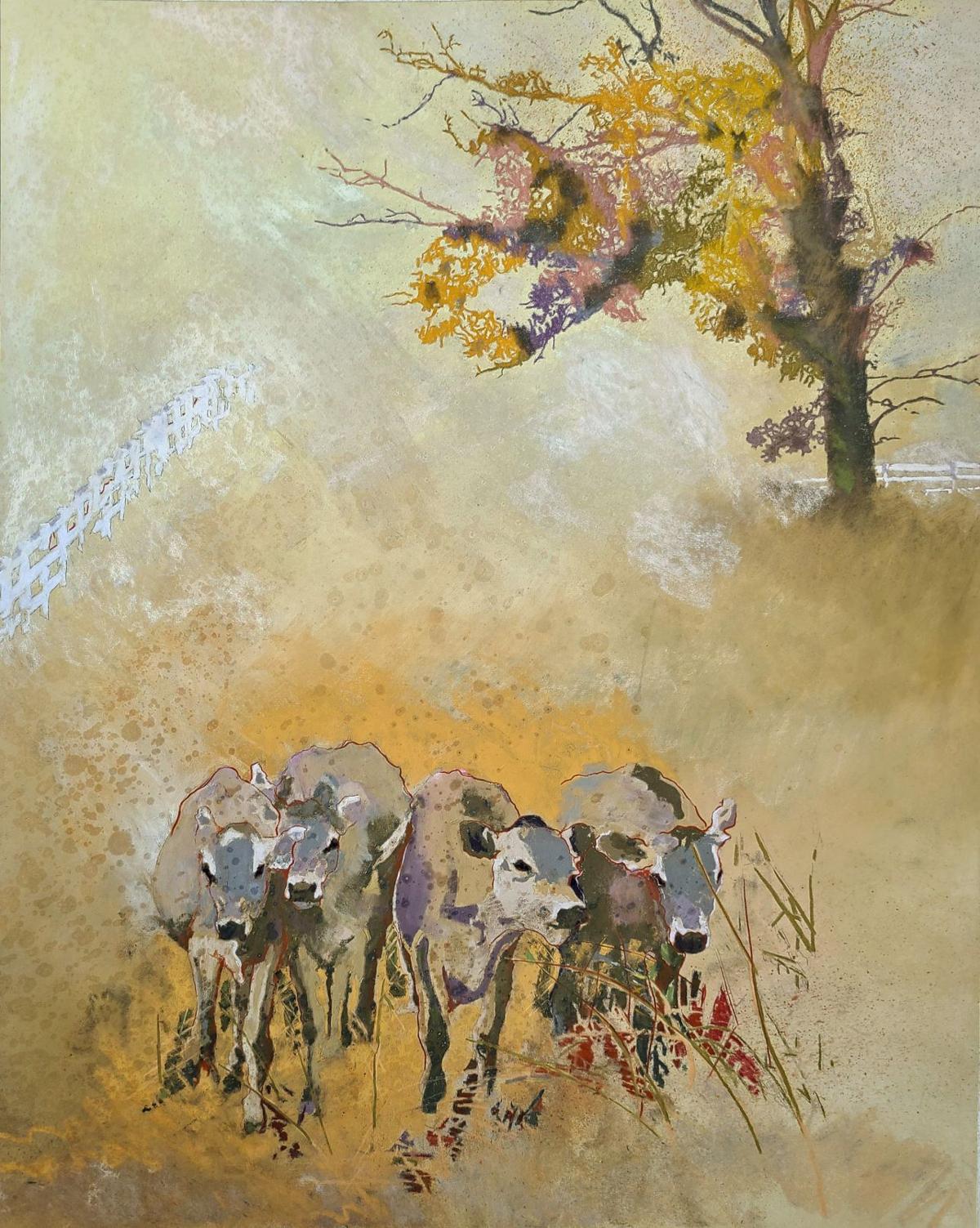 Roberta Condon's pastel painting "American Pastoral 20" is featured on the page for the letter "J" in her book, subtitled "A Jumble of Jerseys; Jobs in Jeopardy." 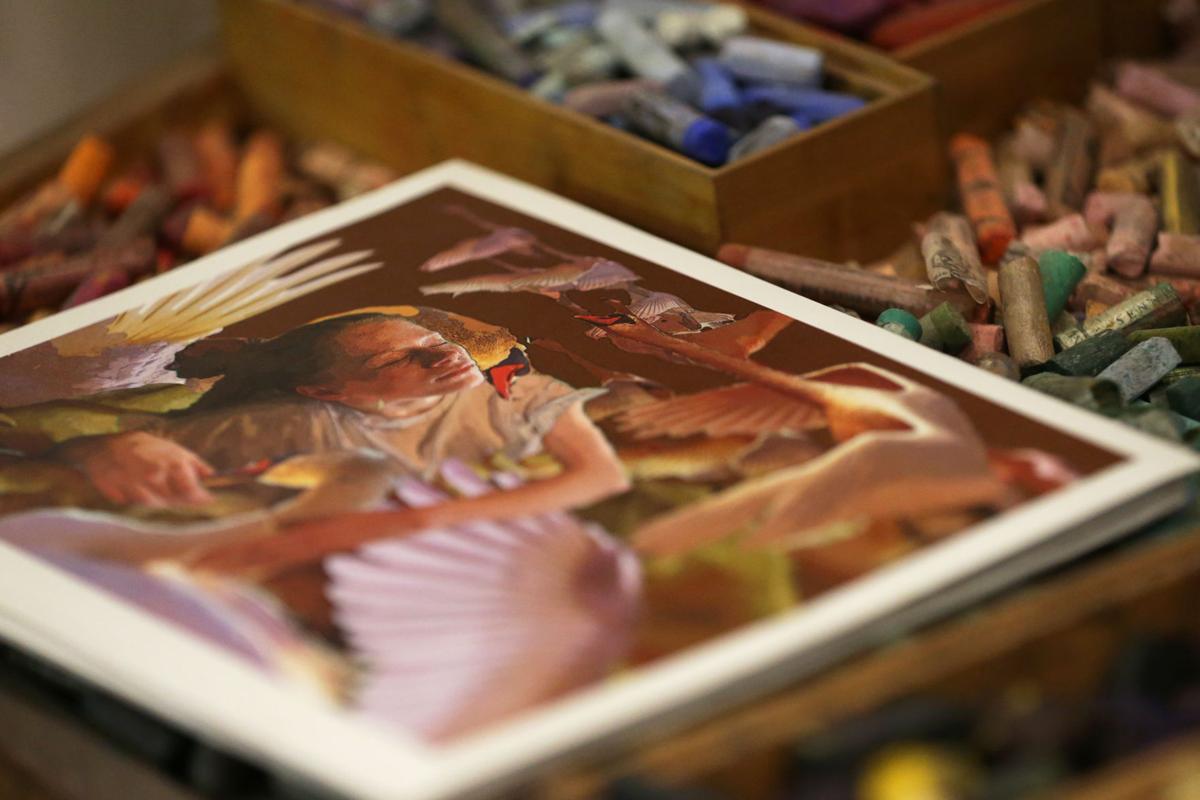 A digital blueprint of a piece Roberta Condon is now working on rests on her easel at her studio in Portage.