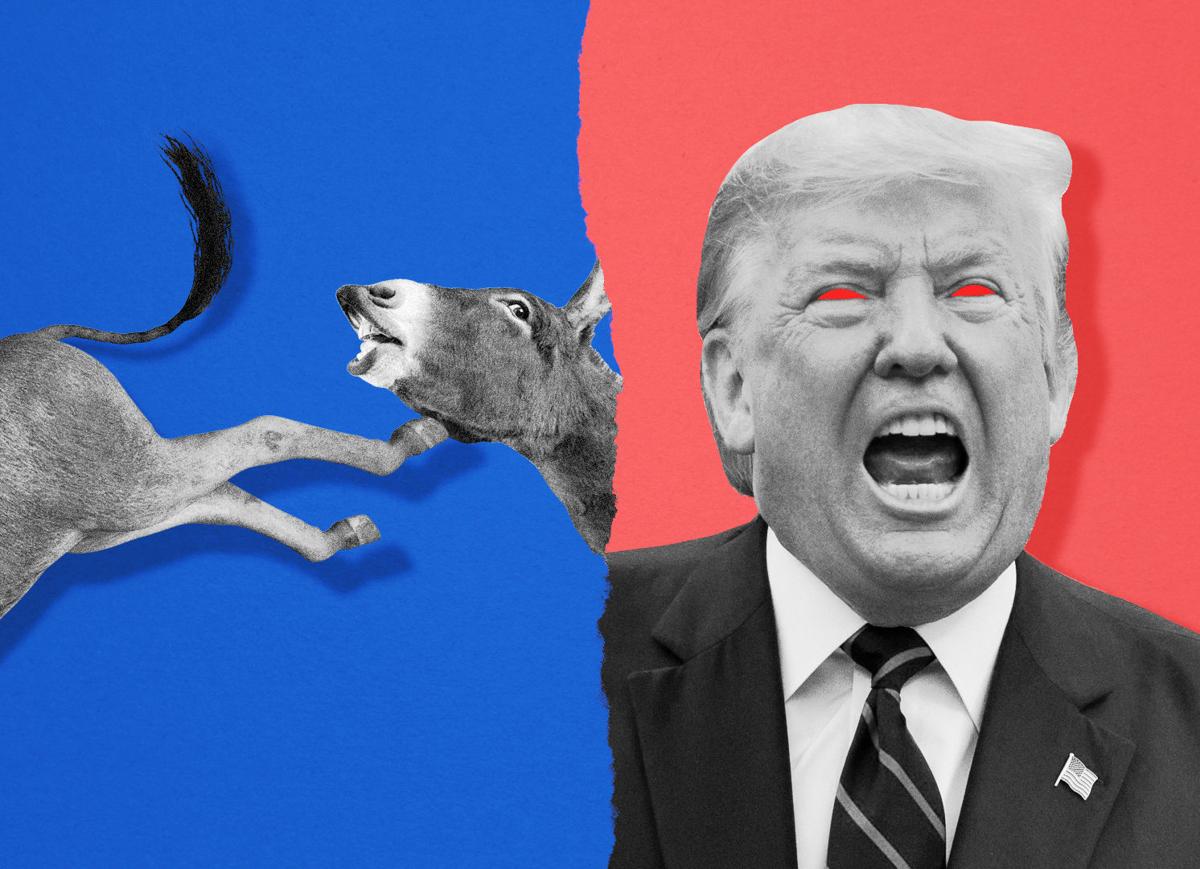 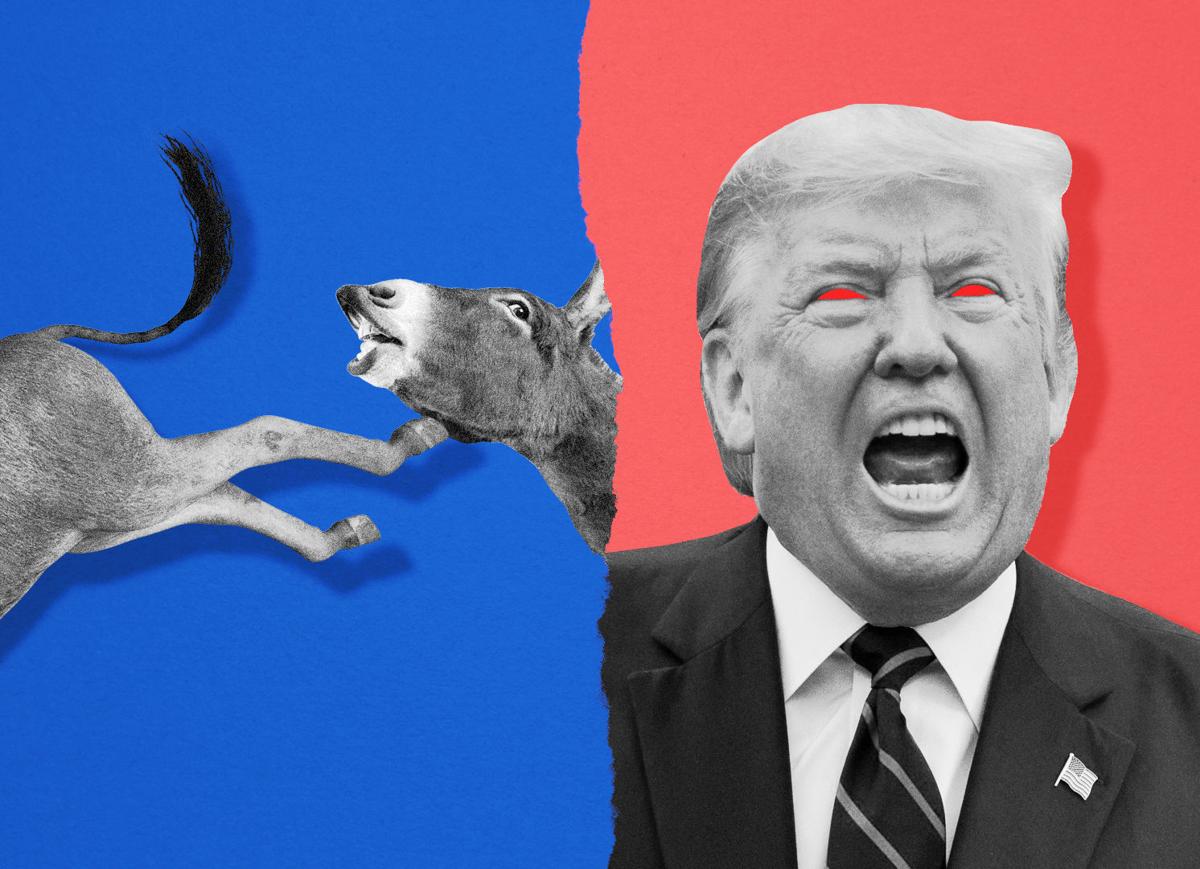 Have you noticed that there are only two overarching themes in current presidential politics?

The first is how Donald Trump is increasingly seen as despicable and immoral by much of the nation. Trump makes the Watergate-era dishonesty of Richard Nixon seem quaint. Day after day, we are aghast at Trump’s cult-like hold on supporters despite being revealed as a straight-out liar by some of America’s most decorated military heroes and credentialed civil servants.

The other theme concerns Democrats and a seemingly existential conflict between the far left and the center left. It is most often seen in coverage of the Democratic presidential candidates, but it runs through pretty much everything.

What is so galling about this intramural Democratic warfare is that it is both destructive and waged as if there really were giant policy divisions between the sides — differences important enough to risk aiding Trump’s re-election. Remember that this is a man who, if he wins again, will fundamentally alter our democratic institutions, if he hasn’t already.

In truth, those on the left agree much more than they disagree.

They agree that climate change is real and actionable, that scientific expertise matters and that a bold and immediate response is crucial.

They agree that huge wealth disparities are immoral and result partly from dark money in politics, and they agree it can be attacked through more progressive tax policies and pro-consumer financial regulations.

They agree that health care is a human right and that government programs can play an important role, just as the advent of Medicare did in protecting the health and dignity of retirees many decades ago.

They agree that the white supremacy movement is a profound threat and that race relations remain a monumental issue and a source of national shame.

They agree that firearms, especially assault and automatic weapons, should be regulated.

They agree that immigrants helped build the nation and that today we need a controlled and compassionate approach to immigration policy.

They agree that people of color and members of LGBT communities are no less American than the whites of European descent whose ancestors arrived a century or more ago.

They agree that women should have equal rights throughout society in contrast to the right, whose leader, Trump, routinely demeans women and has bragged about groping them.

They agree that government mostly employs patriotic public servants, many of whom could earn more in the private sector. They think many of these brave souls have shown public courage and selflessness during the impeachment process.

They see government not as a “swamp” but as a vehicle to improve and protect the lives of ordinary Americans in the historical spirit of presidents such as FDR and LBJ.

Given all that agreement, why is the focus always on differences that suggest an unremitting Democratic brawl?

Some of this is exacerbated by the vying candidates for president, as each attempts to define her or his own brand by diminishing the political brands of others.

And part of the problem is a predictable appetite by the media to draw contrasts. Political tension creates a spectacle, and spectacles drive readership and ratings.

But I wonder if others are as weary as I am of how we all have contributed to a culture that seems to suggest as much disagreement among Democrats as there is with Trump and his distinctive brand of phony, know-nothing populism.

The truth is, there is a vast difference between Trump’s “vision” for America and that of all Democrats, especially in contrast to the relatively minor differences separating Democrats themselves.

But you wouldn’t know it from the tenor of today’s politics of intraparty conflict.

Political pragmatists such as me get criticized for pointing out that regardless of Medicare-for-all and free-tuition campaign promises, there still will be a divided Congress where most Republicans — plus many Democrats from moderate districts — will reject initiatives they regard as radical, regardless of whatever passions for those policies run through political rallies in the boroughs of New York City.

This past Sunday, the New York Times published four columns grouped by the common theme of “How to Beat Trump in 2020.” Each was well-written, albeit predictable.

In “Focus on the Corruption,” the writer suggested exploiting the chaos Trump creates to distract us from his failures as president. The emphasis should not be on how Trump is a bad person, but how he has failed the country.

“Electrify the Base” was a call to arms to excite young voters by offering a “bold alternative vision for what America can be.”

“Win the Internet” called for the Democrats to focus on combating Trump online by harnessing “the right blend of righteous progressive outrage,” complete with “indignation and alarmism.” Those emotions, wrote the author, are effective online.

Finally, there was “Seize the Center,” an analysis recognizing that the Electoral College results in north-central states from Pennsylvania to Iowa — including Wisconsin — will likely dictate the outcome of the election. Yet the writer lamented that centrist Democrats “face a pool of primary voters eager, even determined, to back a liberal candidate who stands well to the left of the general electorate.”

A day after the Times columns ran, the co-editor of The American Prospect, a far-left magazine, was finding fault. Wrote Robert Kuttner: “How about the column pointing out the unmistakable fact that middle-class and working-class voters have been taking it on the chin for four decades; that economic ideas long dismissed as too radical by Times editorial writers and columnists now enjoy majority support?” And so on.

Yes, I see his point. Because, you know, to win a presidential election you need to thread a needle in the Electoral College in swing states, so it makes so much sense to grouse that the smart, left-leaning opinion writers at the New York Times are insufficiently radical.

My thought? Embrace all four suggestions by writers in the Times as complementary and move on.

LATEST IN THIS SECTION

Paul Fanlund: Get used to life at the epicenter of national politics

Paul Fanlund: The gift of a Cap Times membership is lasting and meaningful