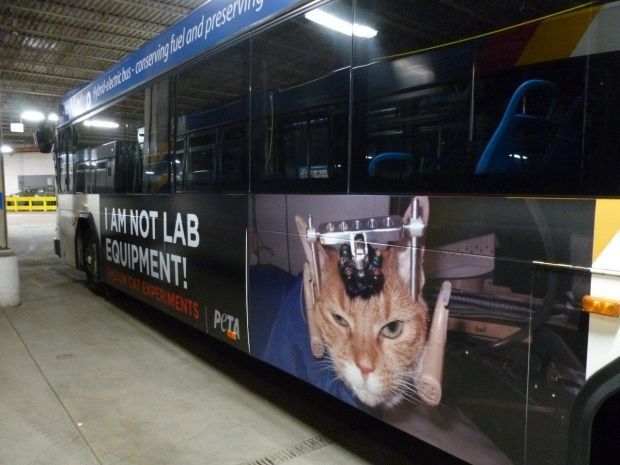 Ads by PETA featuring cats used in research at UW-Madison were part of an aggressive campaign to force its closure. 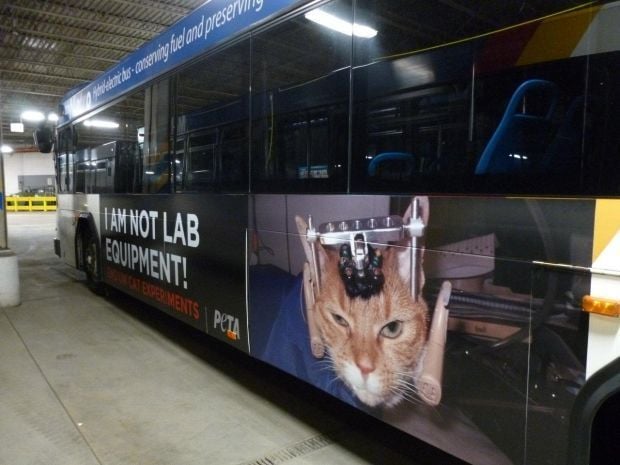 The University of Wisconsin–Madison has quietly halted controversial experiments using cats, People for the Ethical Treatment of Animals reported Friday.

In a news release that exclaims “Victory!” the animal rights organization said that the federal grant funding the research had expired, the doors of the laboratory have been closed and the lead investigator has retired. The cats remaining were released and some have been adopted, PETA reported.

“We're thrilled that no more cats will suffer in this laboratory and that those who survived are safe," said PETA director of laboratory investigations Justin Goodman. "PETA's campaign and the intense public pressure it brought to bear on UW-Madison have ended this horrendous laboratory's legacy of cruelty at last."

PETA had charged that the experiments were cruel. They said that animals in the lab were killed and dissected after having metal restraint posts screwed into holes drilled in their skulls, electrodes put in their brains and steel coils implanted in their eyes.

PETA had waged an aggressive campaign to end the cat experiments at UW-Madison, starting with an investigation in which investigators battled UW-Madison to obtain lab records that led to complaints against UW to federal regulatory agencies in 2012.

Eric Sandgren, animal research oversight director at UW-Madison, at that time denied all allegations and called the complaint a “stunt” by PETA.

PETA based its report in part on UW lab records obtained through open records requests which indicated the study was ended per protocol, the principal investigator retired, and animals were adopted out last fall (see attached PDF). The group also verified that no application was made to renew funding.

UW-Madison officials confirmed Friday that the research had ended, but denied that it had anything to do with PETA's campaign.

The research "was in no way affected or curtailed due to activity by animal rights organizations and any such claims are patently false," said a statement from a UW-Madison spokesperson.

The statement praised the teaching and research of neuroscience professor Tom Yin, principal investigator in the research which "was highly regarded scientifically and yielded important insights into how the brain localizes sound, knowledge important for such things as hearing and cochlear implants." Yin, at age 70, has opted to retire, a decision he made more than a year ago, the statement said.

PETA built public support for their campaign to end the research by buying ads that wrapped Metro buses in photographs of a cat undergoing tests. Public awareness was aided by comedian Bill Maher, who made 100,000 robo-calls in 2013 detailing what he called cruelty to animals in UW labs; actor James Cromwell was arrested that year after protesting the research at a Board of Regents meeting. PETA claims that the university was sent more than 369,000 e-mails from supporters of their demands.

Investigations by the U.S. Department of Agriculture and the National Institutes of Health found no major violations, but the NIH's Office of Laboratory Animal Welfare recommended the university do more to control infection in the lab and improve cleaning methods in surgical areas.

Last year, the USDA, which has enforcement authority in this area, fined UW-Madison more than $35,000 for violations of the federal Animal Welfare Act, including injuries to a cat discovered in its investigation prompted by the PETA complaint.

Ads by PETA featuring cats used in research at UW-Madison were part of an aggressive campaign to force its closure.