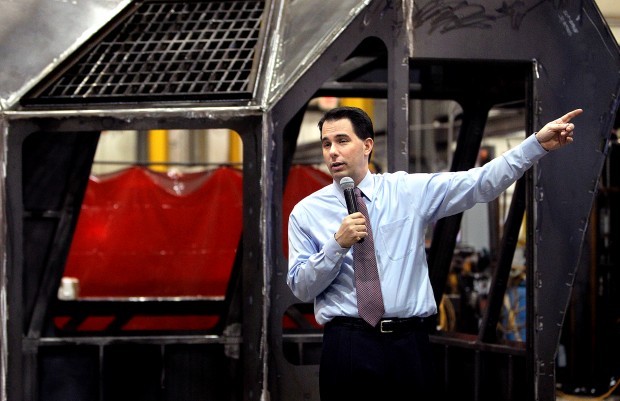 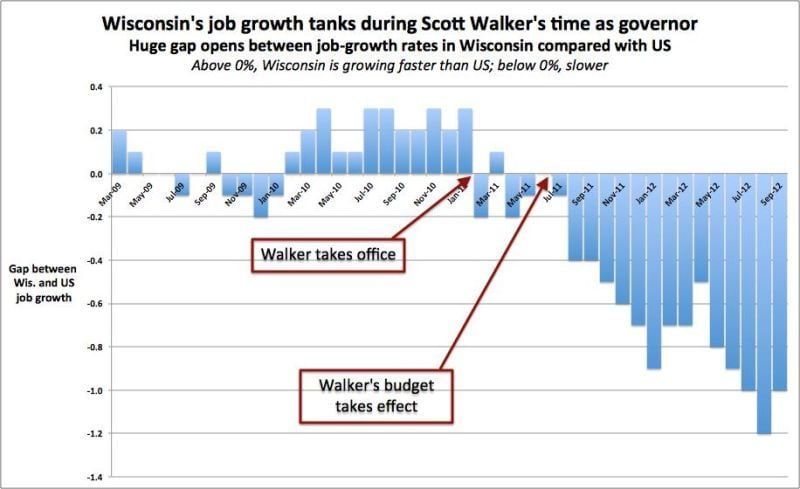 There, Walker appeared on a special panel titled “How to Lead Enterprising States,” joining with the governors of Maine and Pennsylvania.

“I participated in a good discussion about what we’ve done, and what we can continue to do, to help small businesses grow and thrive,” Walker said in summing up the trip for his weekly radio address.

Unfortunately, the U.S. Chamber, in a report released at the event, didn’t share Walker’s enthusiasm.

Its annual scorecard on state economies ranked Wisconsin 44th for overall economic performance and 50th — as in dead last — for short-term job growth as measured between September 2010 and November 2012. It also has Wisconsin 39th in “business climate” — on par with the state’s ranking under Gov. Jim Doyle.

In fairness to Walker, some of the data in the report predates his election. For example, Wisconsin ranks 36th in per capita income growth over the past 10 years.

But the Chamber report capped a very tough patch for Walker, who remains on a mission to try to boost the economy by cutting taxes, reducing red tape and offering up more incentives to the private sector.

Several recent major layoffs in Wisconsin suggest things are getting worse rather than better:

• Fidelity National Information Services Inc., the financial technology company that acquired Metavante Technologies Inc. in 2009, told state officials it plans to cut 301 employees when it permanently closes its operations in Milwaukee. The company closed its Madison offices in 2010, eliminating 157 jobs.

• Cleveland-based Eaton Corp. announced it will lay off 130 hourly production employees and 33 salaried employees at its Pewaukee Cooper Power Systems Division facility as it outsources production to Mexico.

• Baraboo-based Foremost Farms, one of the state's largest dairy cooperatives, said it is closing a cheese plant and idling another plant indefinitely, resulting in more than 100 employee layoffs.

Those layoffs followed the news that Caterpillar is eliminating up to 300 positions at its Milwaukee-area factories by June. Combined, you’re looking at close to 1,000 job cuts over the past month, many in well-paying positions in financial services, manufacturing, agriculture and retailing.

Some Walker critics might see the layoffs as another example of how the Republican governor is failing to deliver on his promise to create 250,000 new private jobs during his first term.

Other critics, though, say the job cuts suggest that waging war on public-sector worker unions, cutting funding for public education and proclaiming the state “open for business” won’t magically turn Wisconsin into a new economy powerhouse.

“What it says to me is that political rhetoric is irrelevant,” says Jack Norman, past research director at the Institute for Wisconsin’s Future.

Norman says companies make hiring and other decisions based on demand for their products and whether they can do business better in a different location. The effect of government policies is somewhere on the fringe, he says.

On the other hand, Norman says one could argue the cuts to public worker take-home pay and other cost-savings measures under Walker have actually made Wisconsin’s economy worse. Here is a graphic showing job growth in Wisconsin before and after he took office.

“I think we’re seeing a local version of the austerity vs. investment debate going on across the capitalist world,” says Norman. “And right now, some countries are getting rid of their austerity policies because they aren’t working.”

Closer to home, Minnesota is apparently choosing investment over austerity. The state needs to close a $627 million deficit but is also looking to direct more aid to local governments to reduce property taxes, increase funding for public education and boost health care.

As a result, the Minnesota Senate just passed a bill that raises an additional $1.8 billion over the next two years by increasing income taxes on the top 7 percent of earners, extending sales taxes to clothing and personal services and raising cigarette taxes. The bill would also provide $327 million in state aid for the Mayo Clinic's $6 billion "Destination Medical Center" project.

It will be interesting to follow the two states over the next several years and see if either approach leads to more jobs, higher wages and a better quality of life for citizens.