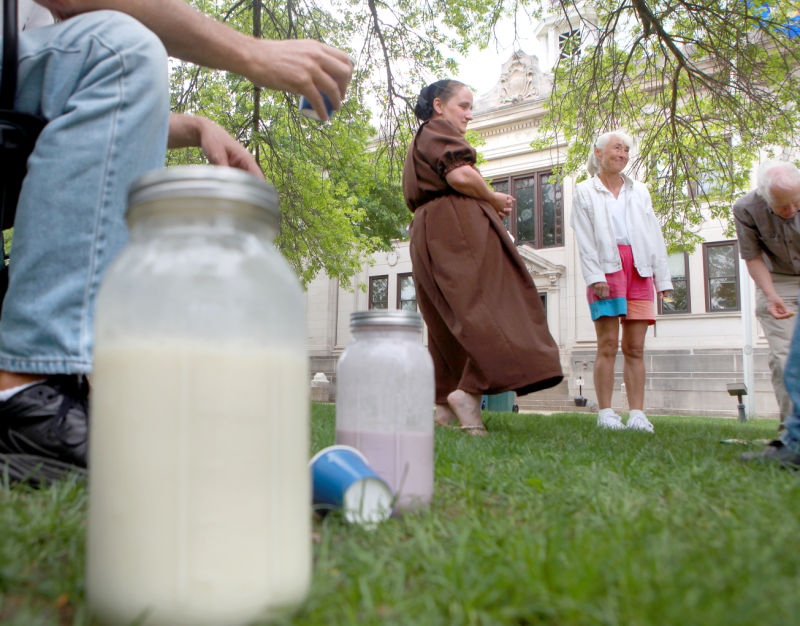 Erma Hershberger, center, stands with family and friends during a recess Tuesday in the trial of her husband, Vernon, in Sauk County Circuit Court. 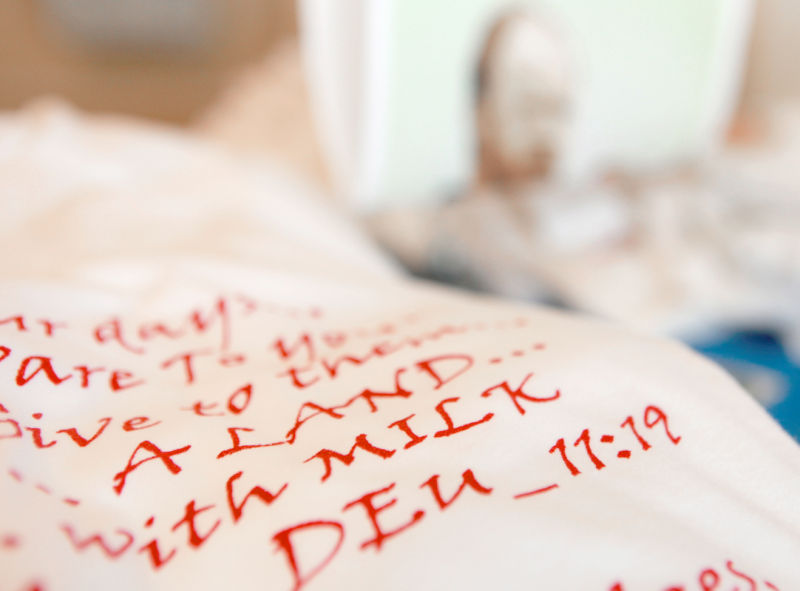 A Bible verse printed on T-shirts being sold to help support Vernon Hershberger's legal fund quotes from Deuteronomy 11:9: "and that you may enjoy long life in the land the Lord promised to give to your ancestors and their descendants, a land flowing with milk and honey." The verse number is wrongly identified on the shirt. 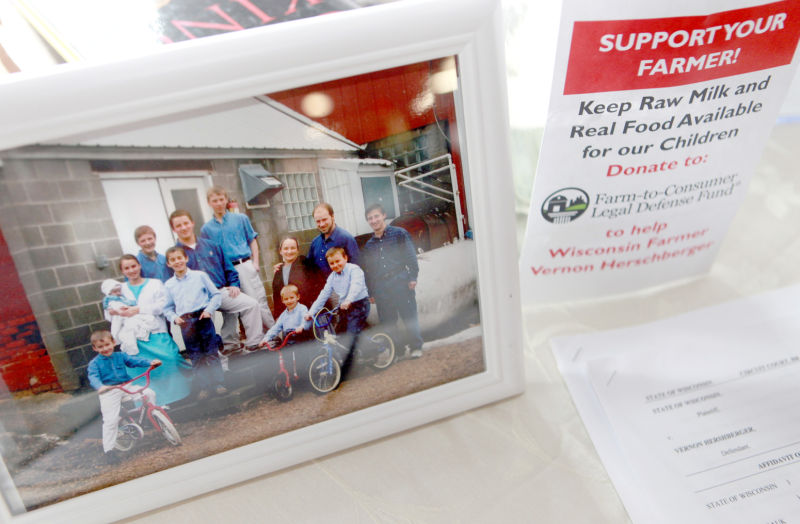 A display in the lobby of the Al Ringling Theatre in Baraboo, where supporters are gathered this week, includes a photo of the Hershberger family.

A block of downtown Baraboo has become home this week to an unusual mix of defenders of defiant raw milk seller Vernon Hershberger, a Loganville farmer who is on trial for violating state agricultural licensing laws.

Inside the Sauk County courtroom Tuesday, several of Hershberger’s 10 children sat quietly behind their dad, listening to hours of testimony from witnesses asserting that their father had violated state law by operating a farmstead retail store and selling meat, dairy and other products without proper licenses.

In the rows behind them were fellow farmers, Madison professionals, young mothers and “food freedom” advocates.

“It’s the Amish, rural, and urban,” said Helen Sanderson of the crowd gathered to support Hershberger this week. “It’s a beautiful cultural intersection of people.”

Sanderson is a Madison resident who supports Hershberger but does not purchase food from his farm. She sat in disgust in the courtroom Tuesday with her friend, attorney Ann Fleischli, also of Madison.

At one point, Sanderson passed me a note, which said “The case is about raw milk, yet the court has ruled the words ‘raw milk’ may not be used in front of the jury. I’m surprised and very disappointed that Wisconsin state licensing and the courts have come to this (decision).”

Indeed, while for Hershberger's supporters the issue is what they see as his right to sell raw milk and other farm-produced goods directly to consumers, Sauk County Circuit Judge Guy Reynolds has placed strict restrictions on subjects that can be raised in the trial. Specifically, he ordered there would be no discussion concerning the safety of raw milk and no mention of why Hershberger’s farm was raided in June 2010.

To that end, I watched a teen-age girl wearing a “Raw Milk Me” button remove it upon the request of a courthouse security guard before she entered the courtroom.

When it seemed witnesses for the prosecution were on the verge of bringing up raw milk, the jury was asked to leave the courtroom.

For raw milk advocates, though, Hershberger's cause is a serious matter of health and the freedom to buy food from whomever they want.

One trial attendee is a stylishly dressed woman who told me she lives in California and summers in northern Wisconsin. She said raw milk is sold legally in California and her family drinks it when they are here too. She represents a prominent portion of raw milk buyers: mothers who swear by the health benefits of unpasteurized milk for their families.

Many enter into private contacts to buy the milk directly from farmers. These contracts are known as cow-sharing or herd-leasing programs, which allow buyers to own individual animals and share in the cost of keeping them on a farm. In exchange, the lessee has access to the meat or milk their animal provides. Hershberger had set up such program on his farm, thereby arguing he wasn’t selling milk directly to buyers.

Kathryne Pirtle, 56, traveled to Baraboo from Addison, Ill., to support Hershberger. She says she does not purchase farm products from him but is part of a cow-sharing program with an Illinois farmer.

Pirtle, an author, nutrition educator and performer, swears by raw milk and farm-fresh foods. She told me outside the courtroom that she almost died 11 years ago from chronic pain and a digestive problem. Changing her diet changed her health.

“I went back to eating like our ancestors,” she said. “I’ve been pain-free ever since.”

The only raw milk I saw during the nearly eight hours I spent in Baraboo on Tuesday was next to Hershberger's wife, Erma, who sat with several of the couple’s smaller children on blankets outside the courtroom. Several glass jars of raw milk were nearby.

The scene was a stark contrast to the big raw milk rally that took place on the steps of the Capitol days before Gov. Jim Doyle abruptly changed course and vetoed a bill in May 2010 that would have allowed for direct raw milk sales from farmers to customers but not in retail stores.

The raid on Hershberger's farm by state Department of Agriculture, Trade and Consumer Protection officials accompanied by Sauk County law enforcement occurred about a month after Doyle's veto.

As supporters gathered in the Al Ringling Theatre directly across the street from the courthouse later Tuesday to listen to a panel discussion on how the Hershberger trial fits into a national movement to allow people greater access to their food sources, one question resonated with supporters.

With the odds looking slim that Hershberger will win, what can be done?

“Take off work,” Liz Reitzig, co-founder of Farm Food Freedom Coalition. “Show up and be there when your farmers are in trouble.”

What do UW-Madison students want in the next chancellor?

Erma Hershberger, center, stands with family and friends during a recess Tuesday in the trial of her husband, Vernon, in Sauk County Circuit Court.

A Bible verse printed on T-shirts being sold to help support Vernon Hershberger's legal fund quotes from Deuteronomy 11:9: "and that you may enjoy long life in the land the Lord promised to give to your ancestors and their descendants, a land flowing with milk and honey." The verse number is wrongly identified on the shirt.

A display in the lobby of the Al Ringling Theatre in Baraboo, where supporters are gathered this week, includes a photo of the Hershberger family.