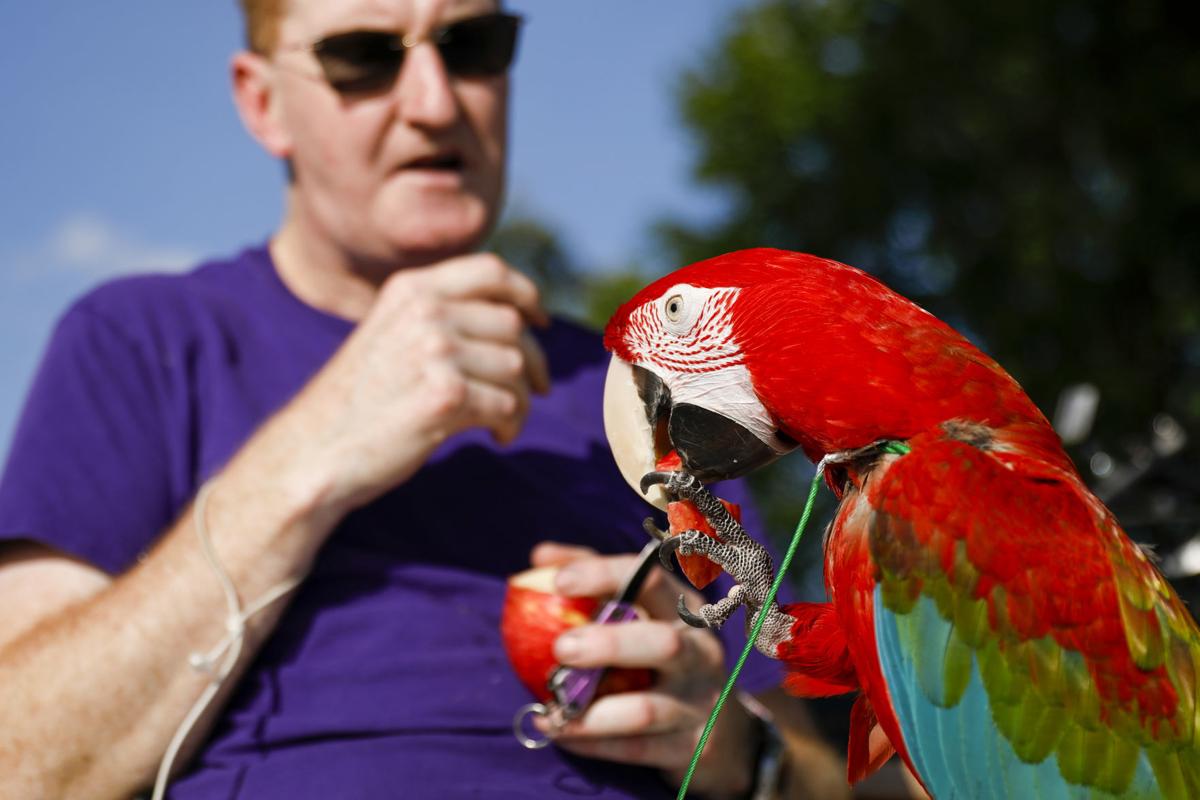 Aaron Dutenhoefer and his macaw Luna share an apple while resting on a lakeside bench at McDaniel Park in McFarland. 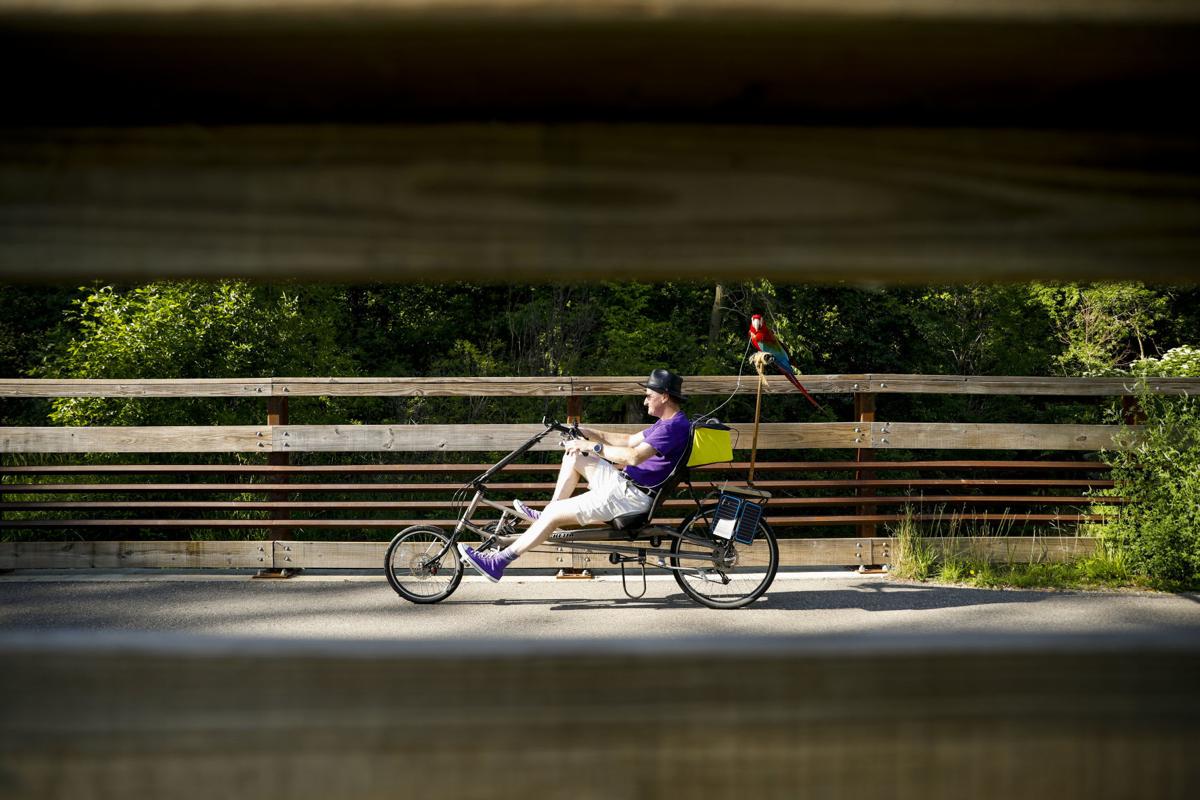 Aaron Dutenhoefer and his macaw Luna travel the Lower Yahara River Trail on a recumbent bike on a recent Saturday.

If you’ve been biking around Madison this summer, you may have done a double take at some point.

A man whizzes by on a recumbent bicycle. Affixed to the back of the bike is a large perch.

It’s a macaw, actually, a brilliant 7-year-old bird named Luna. And the man is Aaron Dutenhoefer, a Fitchburg software developer. Almost every day, they head out together on Madison bike paths to get some exercise, some smiles and a lot of perplexed glances. Dutenhoefer and Luna can also be spotted together at the local farmers' market or Home Depot, or even having a little picnic together in a park.

On a break from their daily ride, Dutenhoefer talked with the Cap Times recently about how he met Luna, why he decided to go bike riding with her, and why, despite the fun they seem to be having together, he wouldn't recommend getting a macaw as a pet.

Have you had birds all your life?

No! Actually, it's funny. I got her three years ago. My then-wife had a cockatoo a number of years ago. She had lost him to cancer and decided she was ready for another bird. She was looking at maybe getting a cockatoo but decided she didn't want to, and also my son has asthma, and cockatoos shed this real fine dust. It's kind of how they like keep their feathers in shape. So that was kind of a no-go.

So we found Luna on the internet. We drove down to Indiana and got her and picked her up. And it was clear this bird hated my ex-wife. No matter how many treats she gave her or attention or whatnot, she just wanted nothing to do with her. She just took to me for whatever reason. I knew nothing about birds, but she just decided I was her person.

What’s the temperament of a macaw?

They're kind of all over the place. Some are just really fixated on their one person and pretty aggressive toward everyone else. And it depends how they're treated. You know, she's still getting over the trauma of her first four years.

Do you have any sense of what those first four years were like?

Well, we got her from a bird rescue, which is code for a crazy lady in Indiana living alone with five birds. She was like owner number three. And I guess her first two owners had neglected her, not really giving her any attention and mistreated her.

I named her Luna, because that’s my favorite "Harry Potter" character, and also because the day we got her there was a lunar eclipse.

Initially, I was the only one she would have anything to do with, but now she'll step up for strangers. She loves going out and being in the sunshine. We used to go to the farmers' market.

How did you hit upon the idea of taking her for bike rides?

I mentioned to my therapist that I was taking her to the farmers' market, and she told the story about when she was growing up, there was a guy in her neighborhood who used to take a bird on the bike. I was like, "I wonder if you can do that?" I started thinking about the idea.

So I wanted to see how she’d react, and we just took it slow. I started just going out by the bike, standing by it, just getting her used to it being there, giving her treats, letting her know it was a positive thing. Then I would hold her and walk the bike around the cul de sac a thousand times. Then I worked up to sitting on the bike and holding her and going around the cul de sac, and eventually putting her on the handlebars.

Then I built the first perch out of PVC tubing and mounted that on there. We just took it slow, and now she loves it. Actually, if I take the day off and we go out on the Southwest Bike Path, where it’s less crowded, I’ve got a longer tether that’s more elastic, and she can fly about 20 feet in the air and get her exercise. It’s so much better for them to be flying.

Wow, because I know a lot of owners will clip the wings.

When I found out she could fly, I was just "No, I can't take that away." I love the relationship we have, but I'm pretty ambivalent about people keeping them as pets. She's too habituated to people to ever go back. They're incredibly amazing animals and they're super smart, but they're just not good pets. I’m sure I’ve talked plenty of people out of getting them as pets. I say, “Imagine a toddler that lives to be 80. That’s pretty much what you’re getting into.”

They're pretty cheap to keep, they don't require a lot of upkeep, but the time investment is just enormous. In the three years I've had her, I've easily put 3,500-4,000 hours of training time to get her to the point where she’s sociable and we can go out and do stuff.

How do you know she enjoys her bike rides?

You hear this with people that have reptiles too. If you're not around birds, you don't get a sense of what their expressions are. But after a while (Aaron scratches Luna, and the feathers on top of her head rise.) See those feathers? That’s how she tells me she’s content.

What kind of reactions do you get? When I first passed you on the bike trail, my first thought was, “That’s got to be a doll, or a puppet.” But then she turned her head and I was like, “Whoa, that’s real!”

A lot of people will say — and I know what they mean — but they’ll say “Is that alive?” Like, I couldn’t get a dead one to stick up there! Sometimes people give you a really suspicious look, but most of the time it’s surprise. I’ve seen a lot of double takes. Some people want to stop and chat. I usually keep a bunch of her lost feathers in the back of the bed to hand out to kids. Most people are very receptive. Even the guys who are running around with no shirt on, nurturing their six-packs, are startled.

A couple of weeks ago we were on the Cap City Trail and this gal passed by, she was walking. She mentioned that she had been away from Madison for a while, and one of the things she missed about being here was getting to meet these crazy characters.

I said, "Honey, I could be a crazy character anyplace."

Fitchburg software developer Aaron Dutenhoefer gets a lot of double takes when he rides his recumbent bike around town. Well, the double takes…

Spencer Black: Sometimes, politicians don't see the light until they feel the heat

Aaron Dutenhoefer and his macaw Luna share an apple while resting on a lakeside bench at McDaniel Park in McFarland.

Aaron Dutenhoefer and his macaw Luna travel the Lower Yahara River Trail on a recumbent bike on a recent Saturday.