"Her Flag" founder Marilyn Artus, left, prepares to sew the first stripe on to the collaborative flag while Jenie Gao, who designed the stripe, looks on at the Arts + Literature Laboratory on Monday. 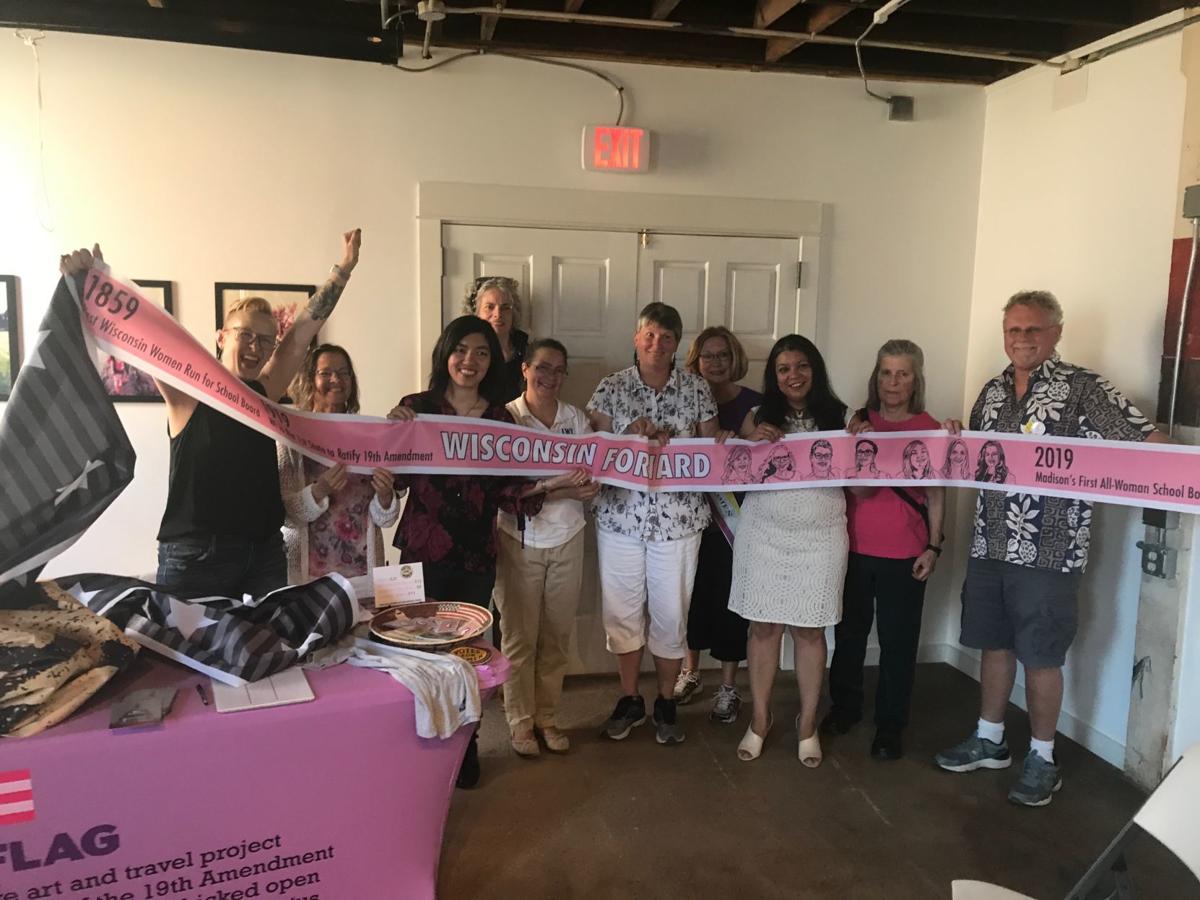 "Her Flag" founder Marilyn Artus (left) celebrates as event attendees hold up the Wisconsin stripe that Jenie Gao (third from left) designed for the collaborative flag, at the Arts + Literature Laboratory.

Marilyn Artus' "Her Flag" supplies, including a sewing machine, the sewing basket containing the next three stripes, a collection of woman-made pin cushions, and the starfield of the flag-in-progress sit ready at the Arts + Literature Laboratory. 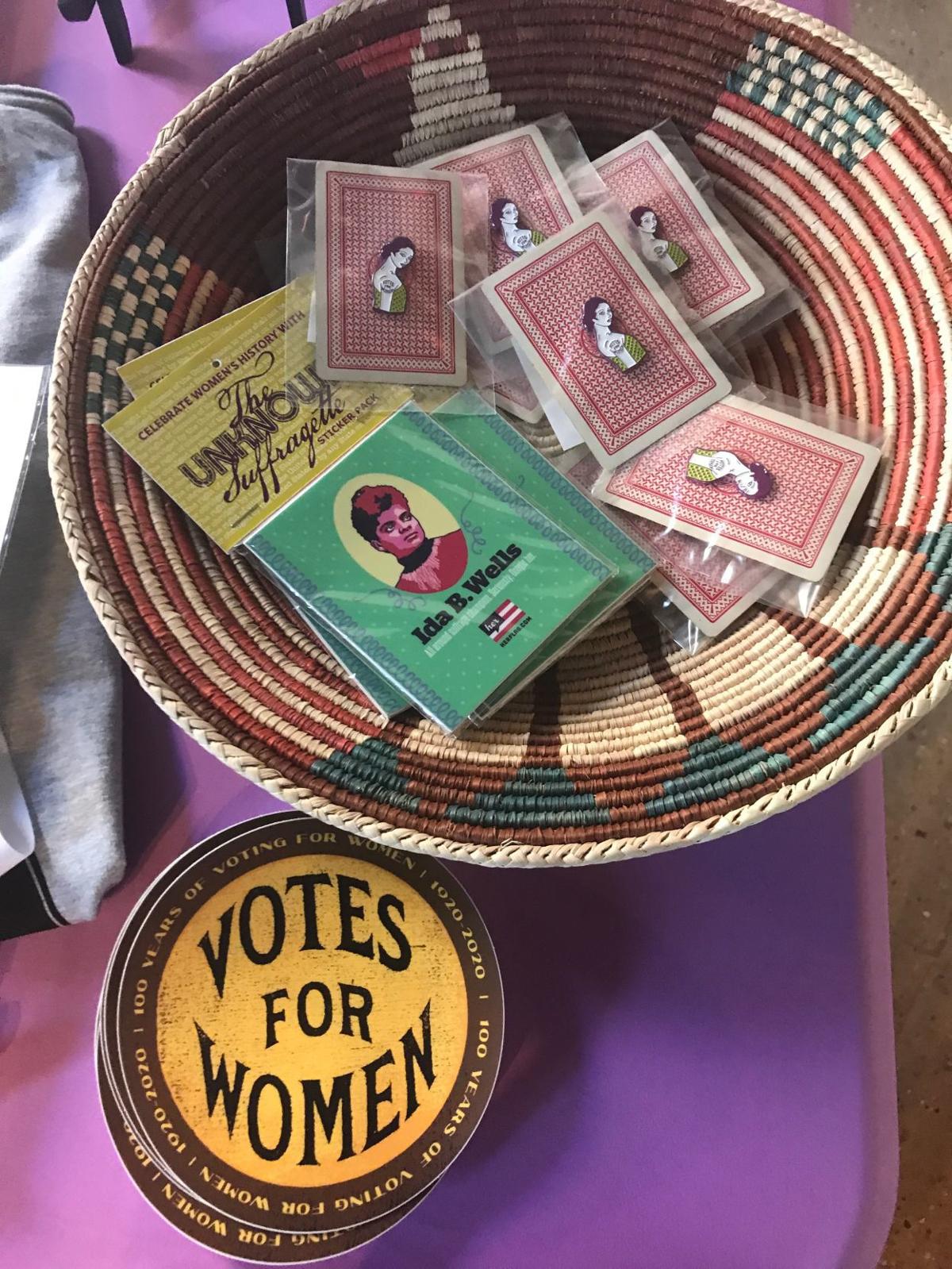 "Her Flag" memorabilia, including images of lesser-known suffragists and stickers designed after the movement's classic buttons, on display at the Arts + Literature Laboratory.

Marilyn Artus’ connection to the American flag began a few decades back, on a school trip to the Smithsonian's National Museum of American History, when the Oklahoma native, then 14, saw the original “Star-Spangled Banner” flag sewn by Betsy Ross.

“I was just really struck by it,” said Artus, who is now a visual artist and self-proclaimed “suffrage era nerd.” “It was a real tangible piece of history that I knew a woman had had a part in making… I had seen my mother, my grandmother, all the women in my family sewing all my life, so… I really connected with that flag.”

In recent years, she’s used vintage ephemera to create American flags with “a kind of a feminist slant.” Now, to mark the 100th anniversary of the ratification of the 19th Amendment, Artus is collaborating with women artists around the country to create a giant art flag celebrating the 36 states that helped give U.S. women the right to vote.

“You know, the last presidential election was so divisive,” Artus said. “I really felt like everybody needed to step in and serve their country... and this was how I could serve.”

She sees the project, called “Her Flag,” as a way to draw attention to the interesting historical women who inspire her own work.

“When little girls and little boys are in school and open their history books, they don't see a lot of women,” Artus said. “When we don't see ourselves there in history... It affects how we get involved in serving our country and being a part of democracy.”

She hopes her work will prompt women to put these hard-fought rights to use by registering to vote and casting ballots in 2020.

‘Not just the white lady show’

For "Her Flag," Artus selected one woman artist in each of the ratifying states to design a stripe for the flag. More than 340 artists applied. Artus then had each artist's work printed onto a sturdy UV-grade fabric by one of a dozen U.S. companies that still hand-make American flags.  The completed flag — with 36 stars and 36 stripes — will likely hang on the outside of a building, as few indoor spaces could accommodate the 18-foot by 26-foot flag.

Artus has only unveiled four of the 36 stripes, which were made by illustrators, designers and fine artists. Some painted their stripes, while other created them digitally. “It's incredibly diverse,” Artus said of the art and the artists.

Too often we celebrate the 19th Amendment while forgetting the women of color who fought for the right to vote and were denied it for years longer, whether by law or by voting practice, Artus explained.  “I always describe it as, ‘It's when we kicked the door open,’” said Artus of the 1920 victory. "It’s not when all women magically got to vote, because of course we all know that did not happen.”

Artus said she is “not super interested” in talking about well-known white suffragists like Susan B. Anthony, preferring instead to introduce people to lesser known fighters like journalist and Black suffragist Ida B. Wells.

Though all the pieces are ready for assembly, the flag won’t be finished until August 2020 because Artus is creating the flag at the same deliberate speed with which the states ratified the amendment a century ago. She will travel to the capital of each of the 36 states in order of their ratification, sewing that state’s stripe to the growing flag at a public event.

First stop: Wisconsin. Illinois, Michigan and Wisconsin all ratified it on the same day, and technically Illinois ratified it an hour earlier than Wisconsin. “But Wisconsin immediately got the document on a train and hand-delivered it to the Secretary of State,” Artus explained, seeking to be ahead of its neighbor to the south. “That effort was really incredible, so Wisconsin usually gets the credit for being the first to ratify due to that really valiant effort to be first."

On Monday, at the Arts + Literature Laboratory in Madison’s east side, about a dozen people huddled around the table as Artus sewed the very first stripe, created by Madison artist Jenie Gao.

Gao’s contribution depicts three “milestones” in the state’s suffrage history. The first came in 1869: “The Wisconsin Senate voted in a landslide that women should be allowed to both vote (for) and run for Wisconsin school boards,” Gao said. “This was 50 years before the 19th Amendment was passed in Congress, so Wisconsin was way ahead of the curve.”

But soon came the backlash.

“Because many of the Wisconsin suffragettes were involved with the Temperance movement, the brewing industry — Wisconsin’s biggest industry — saw them as a threat and lobbied to have that right revoked,” Gao said. Almost 50 years after gaining this right, Wisconsin women lost it.

Next came Wisconsin’s quick approval of the 19th Amendment. “We were willing to be the first to ratify and… get our approval to Washington as soon as possible,” Gao said.

The last milestone came in April 2019 with the election of Madison’s first all-female school board. “You can look at that pessimistically and say, ‘It took 100 years — or 150 years, really,’” said Gao, "‘Or you can say, ‘Alright, finally. We’ve waited long enough and it’s been time for a while.’"

Gao said these three historical moments “point out how education all along the way has moved women forward.”

“That’s been consistent in this history, in this story, and I think we should find it really compelling that, whereas industry and the status quo thwarted women, education has always been necessary and integral to women’s power and leadership.”

Before sewing on Monday night, Artus place pins into a pin cushion emblazoned with a bald eagle. She’s been scouring Etsy to find pin cushions made by women in each of the states she’ll visit. “I love involving those gals in a fine art project. I like involving people that aren't necessarily involved in... fancy art-making,” said Artus, who spent 13 years designing for the “gift industry” before becoming a full-time visual artist.

‘It’s as important today as it was then’

“I’m so amazed by it all,” said attendee Debby James as she waited for Artus to begin stitching. “I think it’s such an incredible, inspiring project.”

“I was moved to tears when I first got here,” James said later, explaining that it wasn’t until she was going through her mother’s things after her death that she learned that her grandmother had earned an education degree. “So, to have it all tied into education… I just found it so moving,” James said. “I also have this piece of art from my grandma, when she was 12 years old, and it was 1915. And I think about, when she made that, (women) didn’t have the right to vote. It’s hard to even imagine what that’s like.”

Marjorie Schuett, a volunteer with the League of Women Voters, was asked to register voters at the event. “Well, today is an important day, obviously,” Schuett said, adding that she had just come back from visiting suffrage exhibits in Washington, D.C., where she had a memorable conversation with a Lyft driver.

“This very lovely young man… was asking me what I had done that day,” Schuett recalled. “I told him that I had been at many of these suffrage exhibits, and he thought for a minute and he said, ‘I’m sorry. I’m ignorant about this. You mean there was a time when women couldn’t vote?’”

“It’s part of this importance of talking about this and the importance of using that vote,” Schuett said. “It’s as important today as it was then, as far as I’m concerned.”

Beside Artus as she sewed was a vintage sewing box holding the stripes for her next three stops: Illinois, Michigan and Kansas. She will drive to each of the 36 state capitols on this 14-month, 17-trip endeavor. The flag will get its last stripe in August 2020, just two months before the voters — men and women of all backgrounds — cast their ballots for the next president. Artus hopes the flag might be hanging from a building in Washington, D.C., during the election.

“I want to involve as many people that want to get on this train as possible,” Artus said, noting that the 19th Amendment owes it ratification, following a “72-years-long nonviolent fight,” to people of a variety of parties and races. “I think every American can come feel good about the accomplishment of passing this amendment.”

The League of Women Voters began in 1920 in order to educate and empower the new voters who'd be casting ballots after the 19th Amendment granted women's suffrage. But executive director Erin Grunze says the group's efforts to inform voters and hold government accountable continue to this day.

"Her Flag" founder Marilyn Artus, left, prepares to sew the first stripe on to the collaborative flag while Jenie Gao, who designed the stripe, looks on at the Arts + Literature Laboratory on Monday.

"Her Flag" founder Marilyn Artus (left) celebrates as event attendees hold up the Wisconsin stripe that Jenie Gao (third from left) designed for the collaborative flag, at the Arts + Literature Laboratory.

Marilyn Artus' "Her Flag" supplies, including a sewing machine, the sewing basket containing the next three stripes, a collection of woman-made pin cushions, and the starfield of the flag-in-progress sit ready at the Arts + Literature Laboratory.

"Her Flag" memorabilia, including images of lesser-known suffragists and stickers designed after the movement's classic buttons, on display at the Arts + Literature Laboratory.