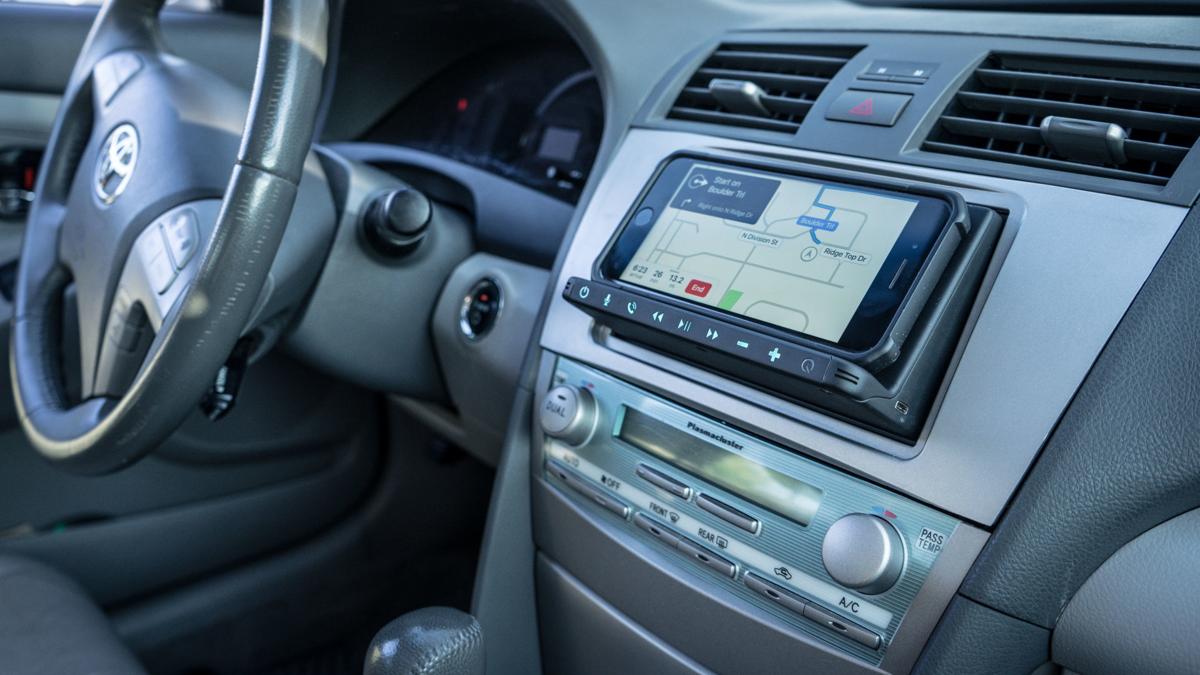 Madison startup Vehroot aims to allow drivers to use the technologies that smartphones have mastered — including speech-to-text messaging and voice-controlled artificial intelligence like Siri — without touching their phones while they drive. 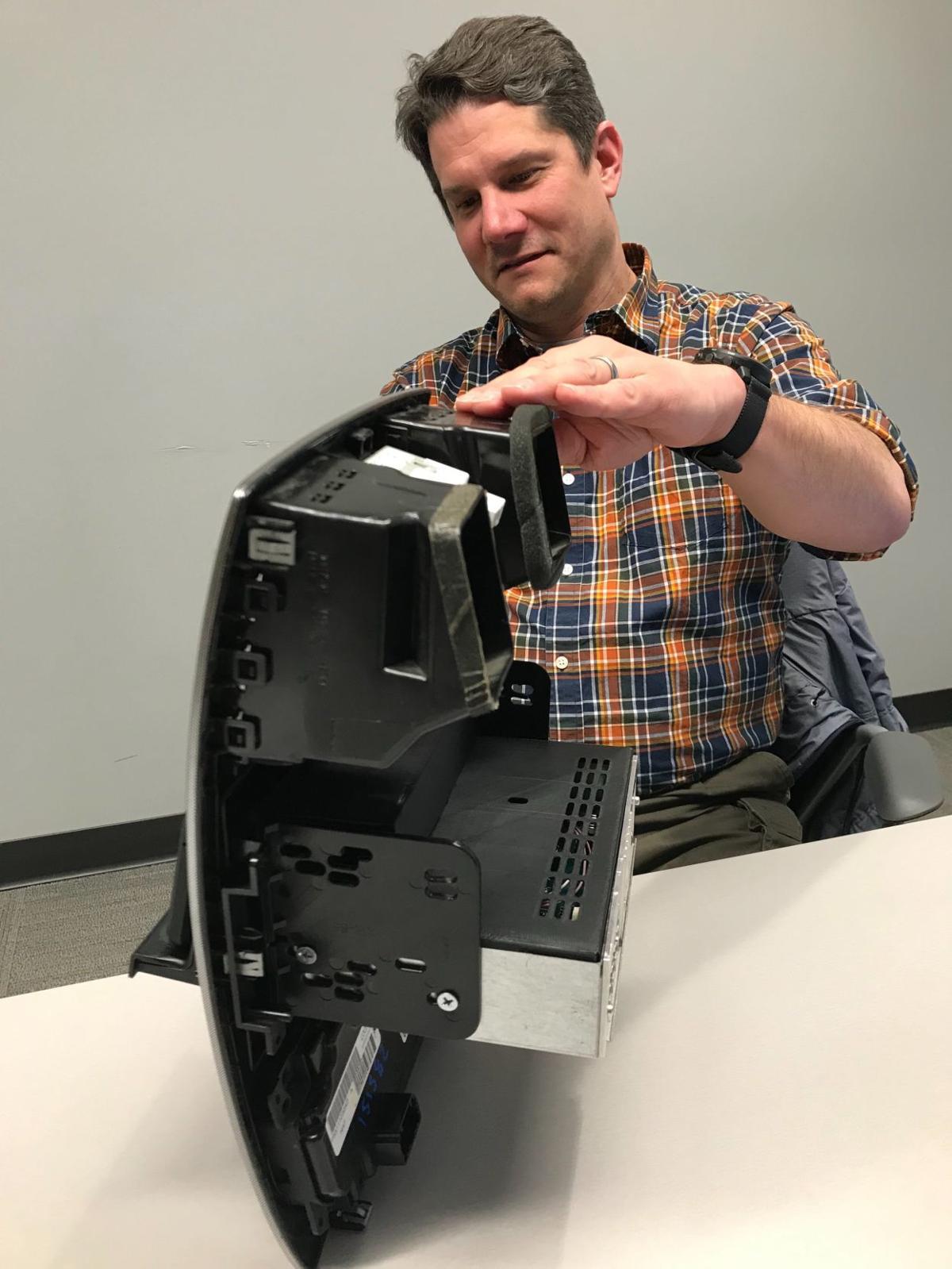 Vehroot co-founder Thomas Robillard shows the back of a car console in which "The Shelf" has been installed, noting that the product is not a phone mount but is actually wired into the car. 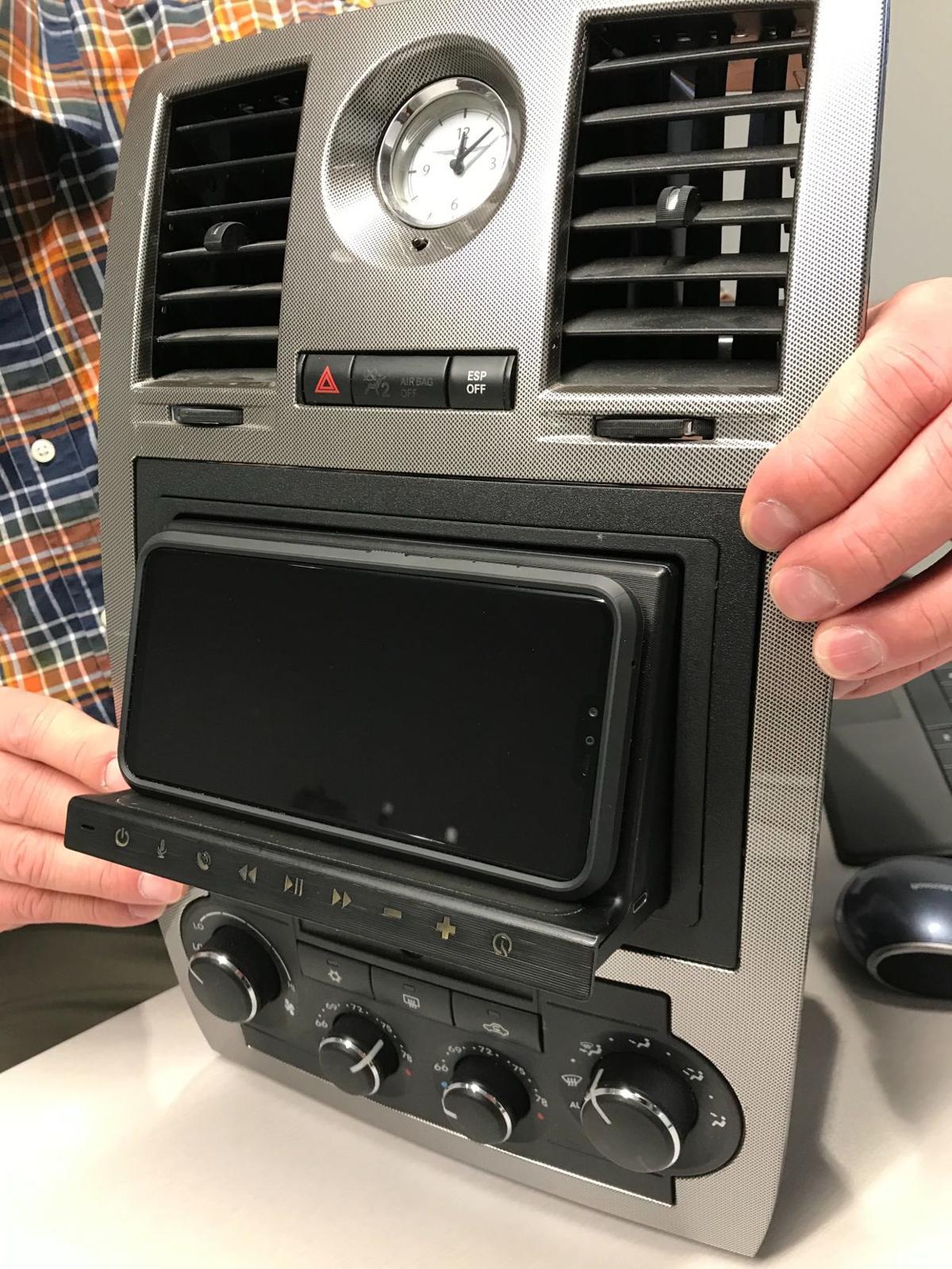 Madison startup Vehroot aims to allow drivers to use the technologies that smartphones have mastered — including speech-to-text messaging and voice-controlled artificial intelligence like Siri — without touching their phones while they drive.

Vehroot co-founder Thomas Robillard shows the back of a car console in which "The Shelf" has been installed, noting that the product is not a phone mount but is actually wired into the car.

Thomas Robillard is on a mission to make our smartphones part of our cars — and he wants to do it with the sort of aftermarket stereo replacement process familiar to anyone who’s ever swapped out their car’s tape deck.

His Madison-based startup, Vehroot, plans to sell “The Shelf,” a piece of hardware that would replace a car’s CD player or dashboard screen, instead securely holding a cell phone or tablet and connecting it via Bluetooth to the car’s computer and stereo without using a separate infotainment computer. The shelf, which is currently operating in a handful of cars in the Madison area, offers wired and wireless charging and has a strip of nine buttons to control the phone without touching the screen. The product would retail for $399, with installation bringing the total cost to about $500.

Given how many cars now come with their own software or tools like Apple CarPlay or Android Auto for in-car listening or navigation, improving vehicle technology with an aftermarket product may seem counterintuitive. But Robillard argues that drivers often opt to use their phones while driving anyway because phone software is familiar and more advanced than the software built into cars.

New vehicles are designed years before they come to market, and drivers tend to upgrade phones more often than cars, so vehicle technology is destined to be years behind phone technology. Some vehicle systems allow for updates, but Robillard said those sometimes come at a cost to car owners, and older systems don’t allow for updates at all.

Robillard isn’t the only one criticizing vehicle technology. An April 2019 Wall Street Journal article described a “confused free-for-all” as car makers seek to appease frustrated drivers and Silicon Valley seeks access to “the last unconquered screen — the one in your car.”

Vehicle software has also raised questions about data privacy. Washington Post technology columnist Geoffrey Fowler recently hacked a Chevy infotainment system he bought used on eBay. “ It contained enough data to reconstruct the Upstate New York travels and relationships of a total stranger,” Fowler wrote, including where the previous owner bought gas and who they called.

The Vehroot shelf might put privacy-concerned drivers at ease, Robillard said. “We’re not capturing, through our hardware, any data whatsoever.” The phone will still connect to the vehicle’s computer via Bluetooth, but Robillard argues that phones offer more privacy controls than vehicle systems do.

As Vehroot Co-Founder for Engineering Development Ben Fisher puts it, “It’s one less thing to have to trust.”

Car buyers often don’t realize how much they’re paying built-in technology that they may not actually use, Robillard said. He regularly builds sample cars online and checks their prices, and he’s found that choosing a simple radio takes “at least a couple thousand dollars” off the price.

Vehroot aims to allow drivers to use the technologies that smartphones have mastered — including speech-to-text messaging and voice-controlled artificial intelligence like Siri — without touching their phones while they drive. The company’s website features a video demonstrating that, even with stunt driving moves, a phone or tablet won’t fall off the shelf.

Asked about Vehroot’s competition, Robillard said that Sony makes smartphone-connected stereos but they are not compatible with all phones and cannot accommodate tablets. “We really don’t have direct competition,” Robillard said, noting that the aftermarket car-modification industry has shrunk substantially in recent decades. Most technology built into new cars mirrors phones rather than using phones directly.

Additionally, Vehroot is working to advance the model to allow two-way communication between car and phone, which Robillard said would set it apart from other Bluetooth devices. Vehroot is developing an app that would allow drivers to interpret fault codes from their car’s computer or trigger input from a rear camera when the car is in reverse.

“The idea is pretty radical, I think,” Robillard said.

The company’s name is a mark of its lofty goal: “Our intention is to become the vehicle root system upon which future vehicle technology operates from,” Robillard said.

The idea for Vehroot was born in 2014, as Robillard drove yet another rental car from Madison to Cincinnati. Robillard, who worked in data communications for the aviation industry, had been traveling regularly for work and had a new rental car each week.

Each car had a different sort of setup for connecting to his phone, so he’d travel with a duffel bag of various mounts and cords, and he’d spend the first ten minutes in the car setting up his phone. Once he set up the Bluetooth connection only to realize that the rental car had downloaded all his contacts, which he then had to figure out how to clear.“It was always difficult — never fun,” Robillard said.

It was on that drive that Robillard asked himself, “Why can’t just set my phone in the dash?”

Returning from the trip, he messaged his longtime friend Ben Fisher, an engineer with a background in material science and prototyping, to ask if he’d help mock up the product. Fisher 3D-printed a prototype and they used off-the-shelf electronics to wire it into Robillard’s 2007 Jeep Grand Cherokee.

Has Vehroot "tapped a nerve"?

And he sees promise: Los Angeles has about 600 aftermarket installers, and Madison has at least five. For Sam Flynn, owner of Flynn Audio in Middleton, business is booming; he recently moved his car audio installation shop to a location three times larger because of demand for their services.

Flynn said he’s seen the Vehroot prototype and understands the case for it. Built-in screens offer lower resolution, and even an aftermarket system won’t keep updating its maps after several years. “In that regard, this is a pretty sweet unit because instead of buying another screen not even of the same tier of quality of your smartphone, you just skip the screen altogether,” Flynn said.

Vehroot Co-Founder for Product Development Shaun Trites said that current Bluetooth technology should not result in a lag.

Signs point to interest: When Vehroot created a link to allow people to pre-order its product, Robillard said the link appeared on at least five websites within a week, and the entire 1,000 shelf initial inventory was reserved within 24 hours after it appeared on the website of a major industry news outlet.

“It does really seem like we've tapped a nerve,” Robillard said.

Waiting for an angel

Robillard, Fisher and their two Michigan-based co-founders are currently working to raise $525,000 in investments, the amount they estimate will carry them through their seed stage, cover the costs of building the initial inventory and allow them to operate for a year, during which time they will seek $3 million in investments.

Last summer, Vehroot participated in Madison startup accelerator gBeta, and Robillard said the founders are always watching for opportunities to discuss their product. But he’s also heard that raising money for hardware can be tricky, especially in Madison, where investors are more familiar with the medical and software industries than hardware or cars.

“I personally believe the ideal funding would come from an angel investor,” Robillard said, meaning someone who would provide the full amount in exchange for part of the company. He knows it’s a big ask, but he’s hopeful that some car lover or tech enthusiast will jump on board.

“The best decision they’ve ever made in their life, probably,” Fisher added, lightheartedly.

In the meantime, Robillard said, they’re considering starting a Kickstarter crowdfunding campaign. Once they secure seed funding, he said they can have the product to market within nine months. “We are ready to move on to the next step,” Robillard said.