The recent denial of a proposal to demolish two buildings and replace them with an eight-story apartment building in a downtown Madison neighborhood called attention to tension over what constitutes historic districts and properties in Madison and whether the city is consistent in protecting them.

The buildings, located at 619 and 621 N. Lake St., are owned by a professional chemistry fraternity — Alpha Chi Sigma — and both are at or near 100 years old. In recent years, the fraternity has been unable to keep up with the financial costs of maintaining the properties and they have fallen into disrepair.

The proposed apartment building would house the fraternity on the first three floors and market-rate apartments on the top five floors.

At its Nov. 23 meeting, the city’s Plan Commission didn’t discuss the proposal before denying it with an 8-0 vote. The decision was based on a report by city planning staff recommending the fraternity seek remedies more appropriate to the preservation of the Langdon Street Historic District, a nationally designated area.

That decision followed the denial earlier this year of Hub II, a seven-story student housing building proposed for 126 Langdon St. Core Spaces, the development team behind Hub II, recently submitted a revised proposal to build on the same lot.

That proposal was opposed by a neighborhood steering committee which listed, among other things, its concern that the new building would not fit in with the historic, traditional buildings around it. Members of that steering committee also opposed the Lake Street development.

But how historic is the Langdon neighborhood? While it’s home to many of the University of Wisconsin-Madison’s fraternities and sororities, which occupy large, old houses, the area has also seen several developments added in recent years.

Where are Madison’s historic district?

There are five locally designated historic districts within the city of Madison. The Langdon district, however, is nationally designated.

• Mansion Hill was once Madison’s most prestigious neighborhood with the largest collection of Victorian houses in the city. In the 20th century, many of the old homes were demolished to make way for apartment buildings, which ultimately led the City Council in 1976 to name Mansion Hill as Madison’s first historic district.

• University Heights was designated historic in 1985 and includes much of the area immediately west of the UW-Madison campus.

• First Settlement is the area immediately to the east of the Capitol Square. In the 1970, the area was marked in city plans for complete redevelopment, but residents began restoring some of the old buildings and in 2002, the City Council designated the area as historic.

What’s the difference between those local districts and Langdon?

Rowan Davidson, an architect who specializes in historic preservation and helped author the city’s Historic Preservation Plan earlier this year, said there are a lot of difference between the two designations.

According to Davidson, the local historic designation encourages “sensitive” development and tries to dissuade developers from changes that would dramatically impact the area, expressed in the integrity of the old construction.

The national designation describes an area or building that contributes to the historic association, architectural importance or archeological value for which the district is important. It does not actually mean that a building or house in a historically designated area can’t be demolished.

Davidson said the national register is intended as an honorary title for historically significant places around the country. It has no regulatory power other than overseeing tax credits.

Ledell Zellers, who chairs the Plan Commission, described the difference between national and local designations in a similar way.

When it comes to 619 and 621 N. Lake St., Davidson said the distinction was muddied during the review of those properties, which are not part of a locally designated district, but were protected as though they are.

“Madison allows all demolition permits to be reviewed by the Landmarks Commission, so properties in the city that are in national register districts can be deemed historically valuable if they feel like it,” Davidson said. “This approach has often pitted the city and preservation community against local neighborhoods and, of course, big developers.”

Zellers pointed out that there are 182 individually landmarked buildings in Madison, many of which are within local historic districts. She said Madison’s 2018 Comprehensive Plan states that “old buildings, even if they are not formally recognized as landmarks or part of a historic district, often establish the character of a place.”

The Langdon area was first built in the 1800s and was home to many large single-family homes. The area included what is now Mansion Hill and many of the city’s prominent families lived there.

But during the 20th century, many of those old homes were demolished and replaced by housing intended for college students, fraternities and sororities. By the 1960s, most of the original 19th century homes were gone.

The Langdon Historic District includes 113 properties, 89 of which are deemed as contributing to the history of the area with a period of significance spanning from 1870 to 1930. The 24 “non-contributing” structures were constructed after 1930.

Both the 619 and 621 N. Lake St. buildings were built before 1930 and are considered to be “contributing” properties in the district.

But much of the area around the Lake Street buildings are non-contributing, either because the buildings are not historic (the Roundhouse apartment building at 626 Langdon St.) or have been renovated without an eye on historic preservation (the Sigma Alpha Epsilon fraternity house at 627 N. Lake St.).

In the report he helped author after studying the area, Davidson and his colleagues at Legacy Architecture concluded that the area west of Frances Street no longer has historic integrity.

“Too many of the buildings that were initially listed in 1986 have lost their character or simply been demolished since,” he said.

A map prepared by Preserve LLC and filed with the proposal a week after the Plan Commission rejected it outlines which properties in the district are contributing, non-contributing and landmarks.

As for the future of the Langdon Historic District, its proximity to campus and the demand for housing in the city make it likely that the area will see continued attempts at renovation and development.

Colin Punt, on staff with the city Planning Division, said even though the trend of new development proposals in the Langdon won’t be slowing down soon, the city has done a good job of putting mechanisms in place to properly weigh proposals that will impact places of historic significance.

“I think we have a good structure in place with the Landmarks Commission and Plan Commission, as well as plans like the Downtown Plan, created with a lot of public input,” Punt said. “I believe the work of the Landmarks Ordinance Review Committee and the recently adopted Historic Preservation Plan will help our elected and appointed officials … make their decisions more easily and provide clarity to manage expectations from neighbors, developers and those interested in historic preservation.”

Zellers said the preference is for sensitive renovation and maintenance in historic districts.

Zellers said she would like to see more people think seriously about what they are proposing for demolition and check into the history of the properties to avoid requesting the demolition of something that may be historically important to the city.

“Some of the reasons older and historic buildings are important include the fact that they are a clear, tangible link to the past with a unique capacity to convey history,” Zellers said. “They often demonstrate a craftsmanship that is rare or not practiced today. The architecture of historic buildings tends to be of a design quite different from today.”

But are the two buildings on Lake Street contributing to the city’s history? And are they architecturally relevant buildings? Did the Plan Commission get it right by protecting them?

“It was eye-opening to listen to dozens of residents, former residents and university representatives speak passionately in favor of demolishing two fraternity buildings in poor condition with little historic integrity, only to be quickly rejected in a matter of minutes,” Davidson said.

Davidson said the latest back and forth over the Lake Street properties has the potential to set a precedent for similar projects having difficulty being approved in the current political climate.

“There has been a lot of building since the 1980s,” Davidson said. “This has meant increased density for student housing is in keeping with the area’s history since the turn of the century. However, with the precedent of rejecting an apartment building at the Lake Street site, perhaps this will change.”

“It is hard to imagine any similar projects being approved in the future barring some political maneuvering,” Davidson said. “This may mean that the area along Langdon follows a path similar to the neighboring Mansion Hill in the long term, with the student population leaving for lower rents and the large homes and apartments becoming luxury properties. This process would take decades though.”

Opinion | GOP politicians are the Typhoid Marys of the 21 century 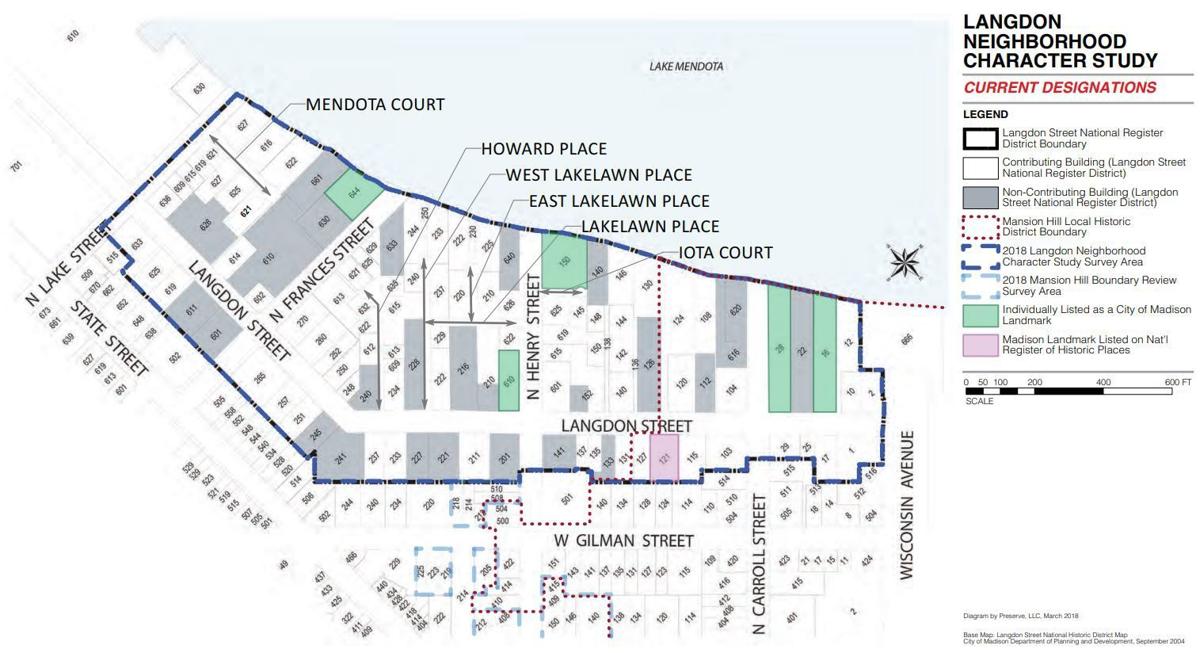 A map prepared by Preserve maps the Langdon Historic District and points to contributing and non-contributing properties.