When D.J. landed in the Dane County Juvenile Detention Center on March 1, Gov. Tony Evers had not yet ordered most Wisconsinites to stay home. Most people were still showing up to work in their offices, stores and restaurants, and few were wearing masks. As he heard about the changes outside through TV news and phone calls with family, the 15-year-old (named here by initials to protect his privacy) had a front row seat to the pandemic-induced changes within detention center walls.

At the facility, coronavirus concerns have extended stays, prompted quarantines, canceled activities and forced staff to get creative. But some advocates hope the pandemic inspires adjustments that last long after we’ve stashed our masks.

Following guidance from Public Health Madison & Dane County, the facility has not tested any of its in-custody youth, though it did obtain 50 coronavirus test kits.

The center has yet to have a known case of the virus. “We just feel fortunate we've not had to deal with that yet,” said Juvenile Court Administrator John Bauman, who credits safety precautions within the center and in staff members’ personal lives.

“It doesn't mean it won't come in the future, though.”

Youth recognize the risk, and many know someone outside who has contracted the virus, said detention center superintendent Edjron Pearson. On top of that, those who were awaiting transfer to Lincoln Hills youth prison, which halted admissions for more than two months due to virus concerns, didn’t know how long they’d be waiting.

D.J. said the coronavirus was certainly on his mind. “I hope my parents don’t catch it,” he said, “and by the time I’m out, I hope this is all over with.”

A.F., also 15, said he didn’t know anyone who’d gotten the virus, but he too was thinking about the risks facing his family. “I hope they’re staying six feet apart and wearing a mask and keeping their hands and face clean,” he said.

Meanwhile, activists who seek to abolish prisons and replace them with other approaches to community safety have pointed to coronavirus risks as yet another reason to end incarceration.

In a May 31 statement following the first day of recent protests against racism and police violence, Freedom Inc., Urban Triage and the Party for Socialism and Liberation called for the release of all Black people. “Peace comes when the jails are empty,” the statement read.

After the initial quarantine period, youth are treated as negative for the virus and allowed to interact with each other and with staff as normal.

“Social distancing is pretty much impossible unless you’re in quarantine,” Pearson said.

But the pandemic has sharply limited the variety of activities available to detained youth. Previously, Madison Public Library staff led art and technology activities, University of Wisconsin physical therapy students taught exercise and meditation skills, and members of UW’s Black Law Student Association visited for monthly lunches. But due to virus concerns, outside facilitators are barred, forcing staff to get creative.

To keep youth busy and connected, the center obtained iPads and laptops for video phone calls with family, social workers, evaluators and lawyers, as well as for court hearings, which quickly moved online. Youth can also use the devices to watch television shows and movies.

One staff member, who is also a youth pastor in the community, is temporarily charged with providing Sunday church services. School, taught by Madison Metropolitan School District teachers, moved to Zoom. Library staff, who would typically lead in-person art and technology activities, have taken their classes online. And Pearson and instructor Albert Watson stood in line outside Costco to stock up on ingredients so that a popular Thursday cooking class could go on as planned.

“We’ve just kind of had to put on different hats while we're here,” Pearson said.

Before the pandemic, the average stay at the detention center was 10days. But several youth recently stayed far longer due to a March 23 statewide moratorium on transfers to state prisons and juvenile facilities. At least nine youth stayed more than a month at the center, with seven of them staying for 49 days or more. One Dane County youth detained at Waupaca County Jail declined a transfer to the center, remaining at the jail for at least two months. All were Black.

“This decision was made out of an abundance of caution as part of the statewide efforts to mitigate the spread of COVID-19,” a Department of Corrections spokeswoman wrote of the moratorium in an email, noting that the department “takes the responsibility to protect staff and persons in our care seriously, particularly our youth.”

E.O, 15, spoke to the Cap Times on June 8, a week before his scheduled transfer to Lincoln Hills. He said he was eager to be transferred to the youth prison, which he viewed as a less strict environment, and frustrated he’d had to wait. But he said that his family preferred the center, worried he might contract the virus at the state facility.

“They think it’s too dangerous,” he said.

Transferred youth will be quarantined for 14 days upon arrival. D.J., who had been in the controlled county facility for more than three months, didn’t see why.

“I obviously don’t got the coronavirus. I haven’t been outside or anything, and all the people that’s been by us don’t have it either, so I don’t understand why I’ve got to get quarantined,” he said. “But I’m assuming they’re just trying to be on the safe side.”

By Tuesday, only three youth remained at the county detention center and none were awaiting transfer to corrections facilities.

The delay in transfer could mean those youth spend more total time in corrections, Bauman said. That’s because youth are evaluated for release based on their progress on a court-assigned “treatment plan,” which stipulates requirements such as completing an anger management group or drug treatment.

The sort of programming available at the detention center does not typically count toward such requirements, but toward the end of the time before transfers resumed, the center worked with the Department of Corrections to develop a group facilitated by Corrections staff that would count.

In addition, Bauman said, county staff have been urging state corrections officials to factor in the youth’s participation and behavior, which are documented in reports written by county staff. “They were here a long time and did quite a good job,” Bauman said of the youth.

Eventually, the county may offer such programming. The county had planned to build a secure facility where it could house youth in state custody following the anticipated closure of Lincoln Hills and Copper Lake. The two facilities drew criticism and investigation following allegations of abuse and were scheduled to close in 2021, but the timeline is now unclear. Dane County submitted a proposal to build the facility but told the Cap Times that the plans have been on hold since February due to delays and uncertainty in the funding process.

Kenneth Streit, an emeritus professor at UW’s Law School, wrote in an email that the pandemic could offer an opportunity for county officials to “develop and test drive some of the components which have been proposed for local programs which would eventually be replacing Lincoln Hills.”

The programs administered at state facilities are “not state-of-the-art,” Streit wrote. “Most likely there are professionals in Dane County who can readily deliver superior programming,” and he estimated that it may be cheaper than the rate charged by the Department of Corrections.

Streit pointed to an approach used in Racine, where youth complete county-administered treatment programs before their cases are decided and avoid going to state facilities, but Bauman said the recent extended stays were “an exception” from the norm.

“We generally don’t have a group like that … who would have a long amount of time to engage in some treatment or pre-treatment,” he wrote in an email, noting that the facility will resume its on-site treatment and enrichment activities “when we are able and are already engaging youth virtually with providers whenever possible.”

Not going back to “normal”

Dane County Circuit Court Judge Everett Mitchell, one of four judges currently assigned to hear juvenile cases, said the shift has meant juvenile defendants have more support at their hearings, since relatives or other members of their support networks don’t need to miss work, find rides or pay for downtown parking to participate in hearings and talk with the judge.

That, he hopes, could continue beyond the pandemic, along with other ways the court and detention center have used technology to keep detained youth connected to their families.

“One thing I can say that this pandemic has forced communities to do is utilize technology better than they have before,” Mitchell said, adding that the newly adopted tools have increased contact between youth and their families over pre-pandemic levels.

Those connections are especially important as a deadly virus threatens loved ones in the outside world.

“Just to know that their grandmothers and sisters and aunts are doing good and they can see them and talk to them, I think it also aids in the anxiety so they can just focus on completing their plan and work their way back home,” Mitchell said.

Bauman plans to keep using video technology after the pandemic subsides, both for hearings and for youth meetings with everyone from parents to therapists, noting that the technology could let such meetings happen more often than they did before the pandemic.

“We’re really excited” about that option, he said, noting that “it has always been a struggle” to figure out how to increase the frequency of in-person family visits.

The center has also added more large TV monitors, which enable outside professionals to facilitate groups or interventions remotely. “There are a lot of possibilities in this area,” Bauman said.

Mitchell too is optimistic that the lessons of the pandemic will outlast the virus. “I really don't believe that we're going to go back to just normal,” he said. “I think we're always going to rethink how we do things and try to do things a little bit more accustomed to the ways in which children and family can be supported moving forward.”

For now, Dane County officials aren’t moving forward with their proposal to expand the downtown juvenile detention center — a key part of the state’s plan to overhaul juvenile corrections in Wisconsin.

How about them apples? Pick your own, make a cocktail 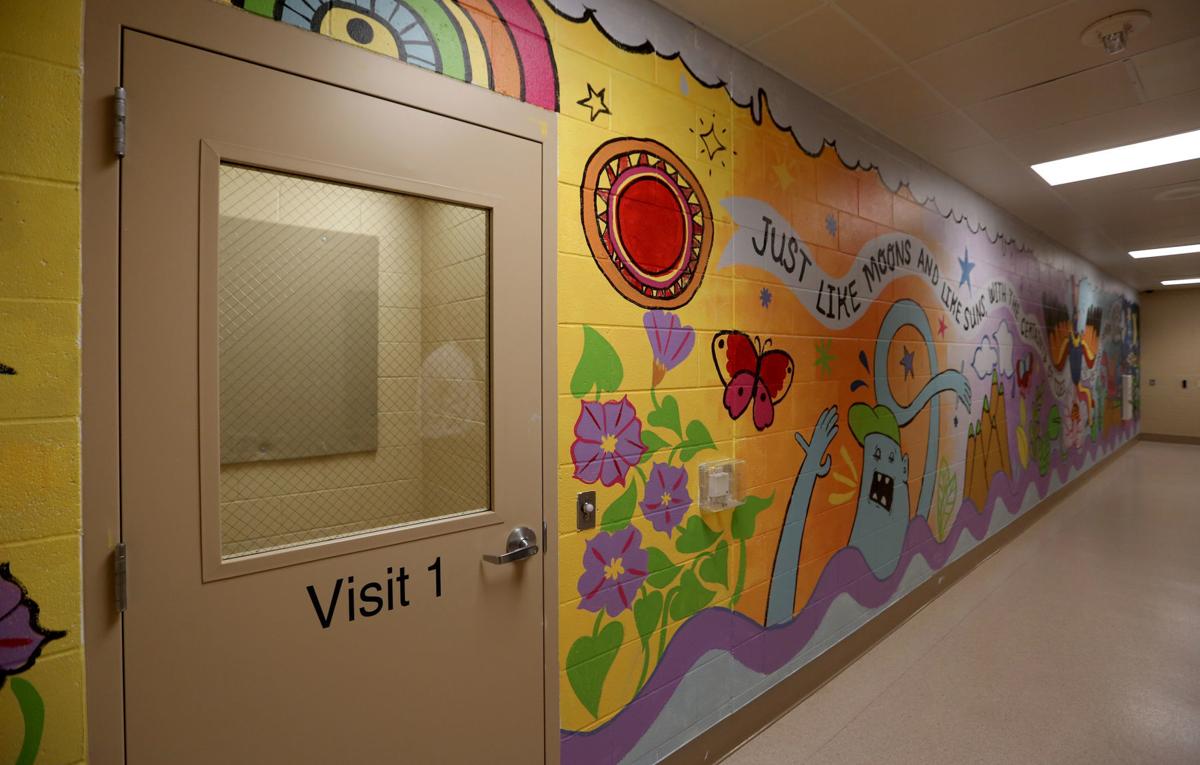 Due to coronavirus concerns, the detention center has ended in-person visits but has provided iPads and laptops so youth can have video calls with family, lawyers and social workers. 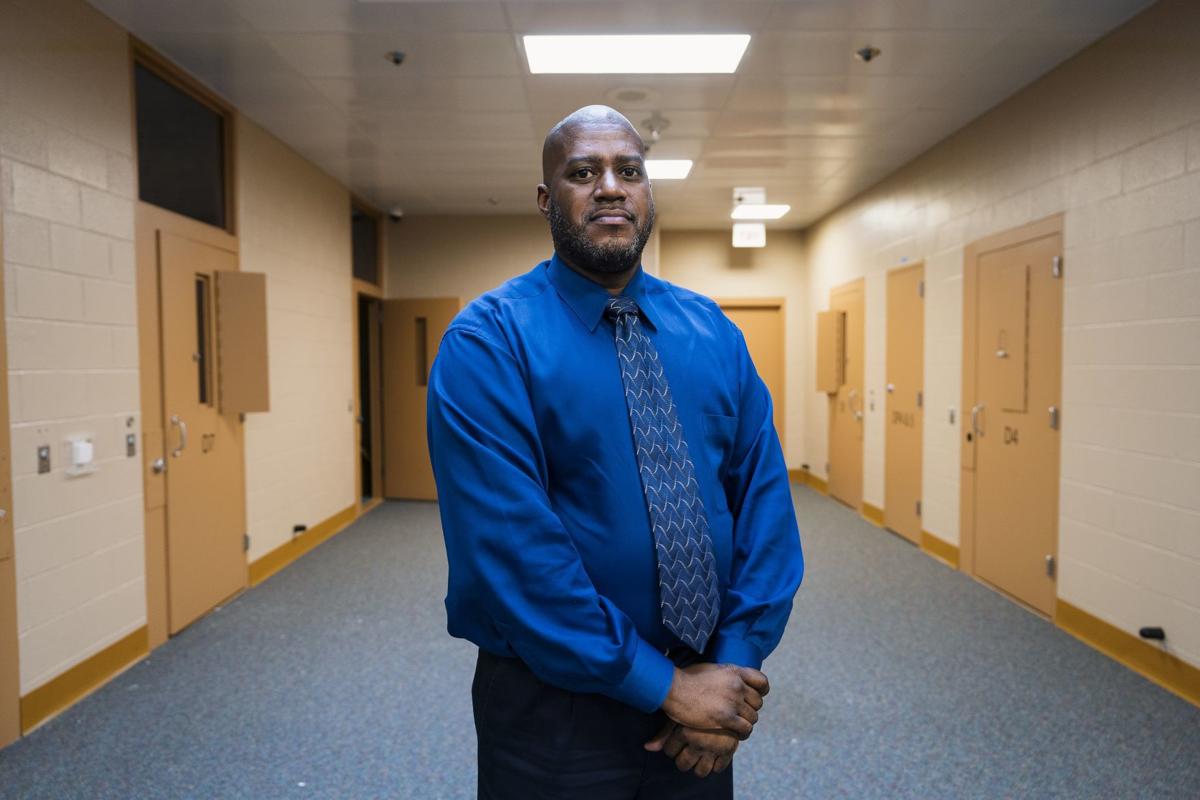 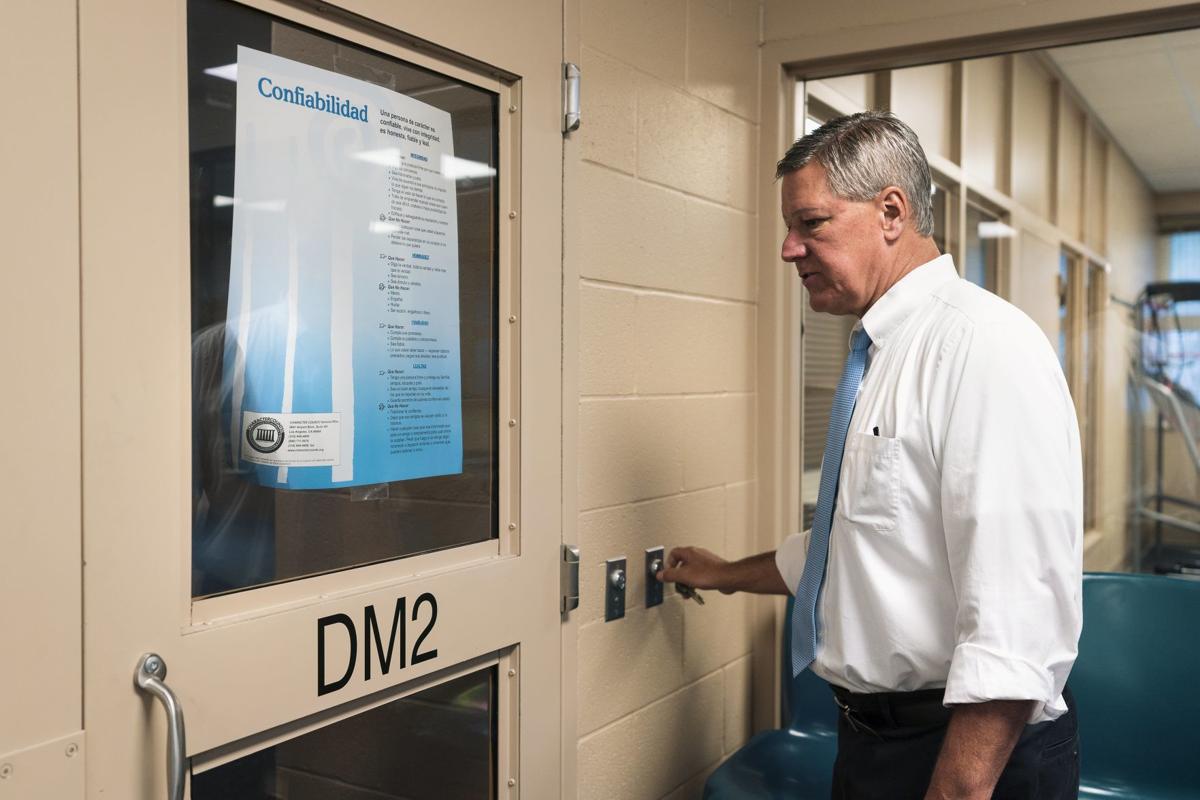 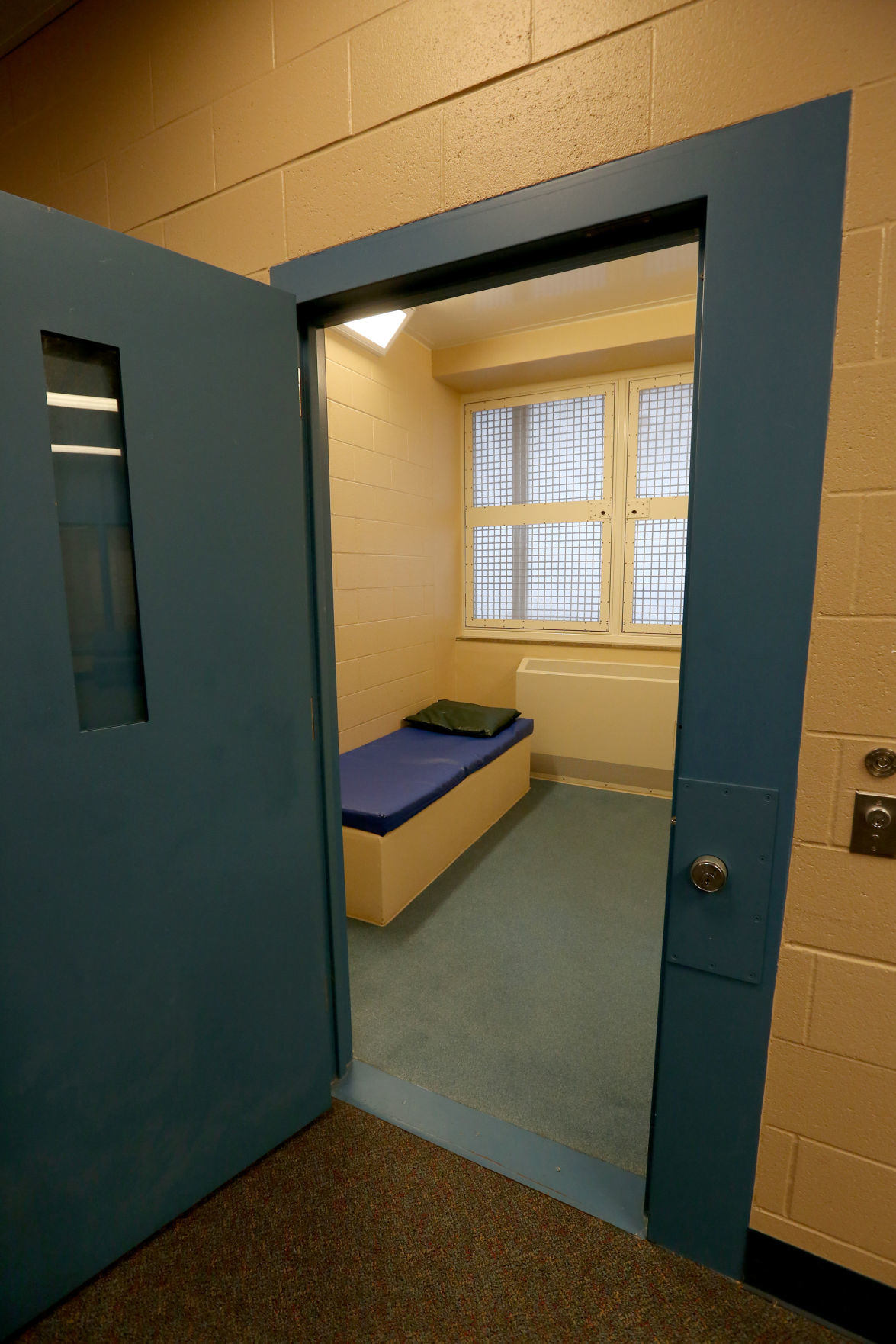 Due to coronavirus concerns, youth detained at the Dane County Juvenile Detention Center are isolated in their rooms for 14-days upon arrival.