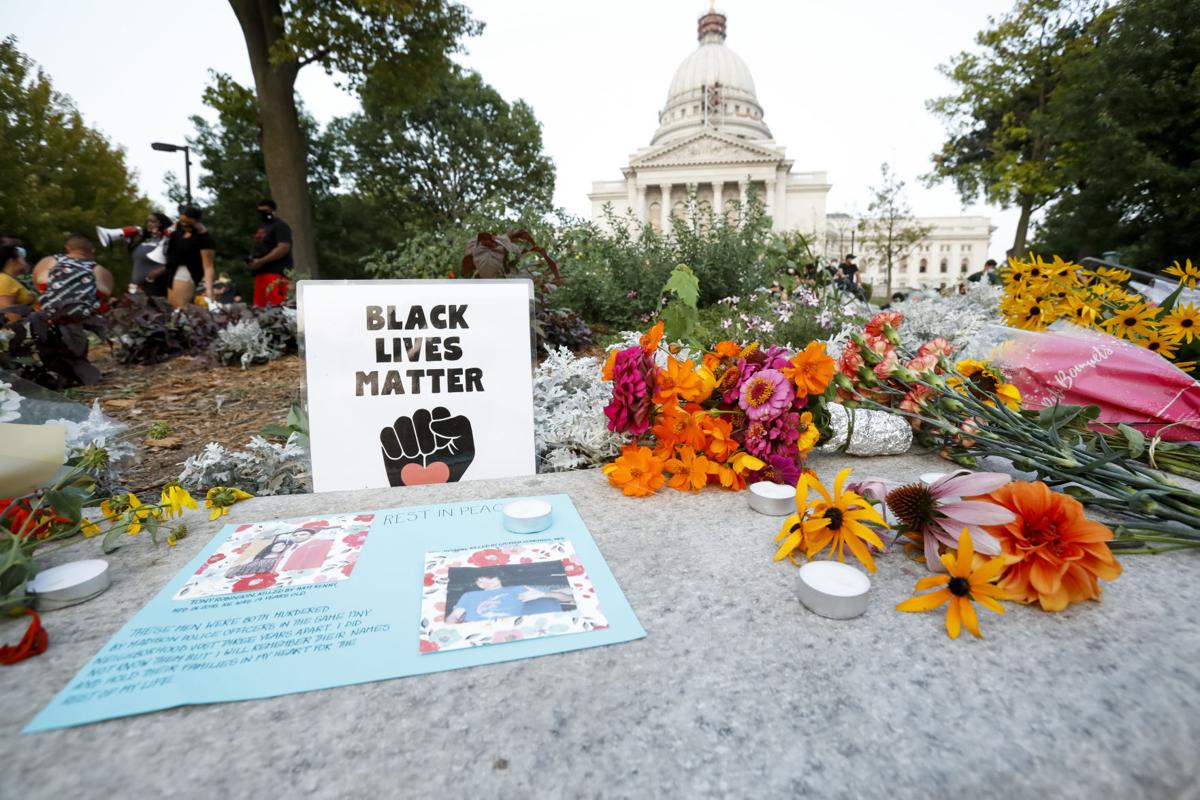 Flowers and memorials cover the circular planter at the top of State Street, on Tuesday, Aug. 25. 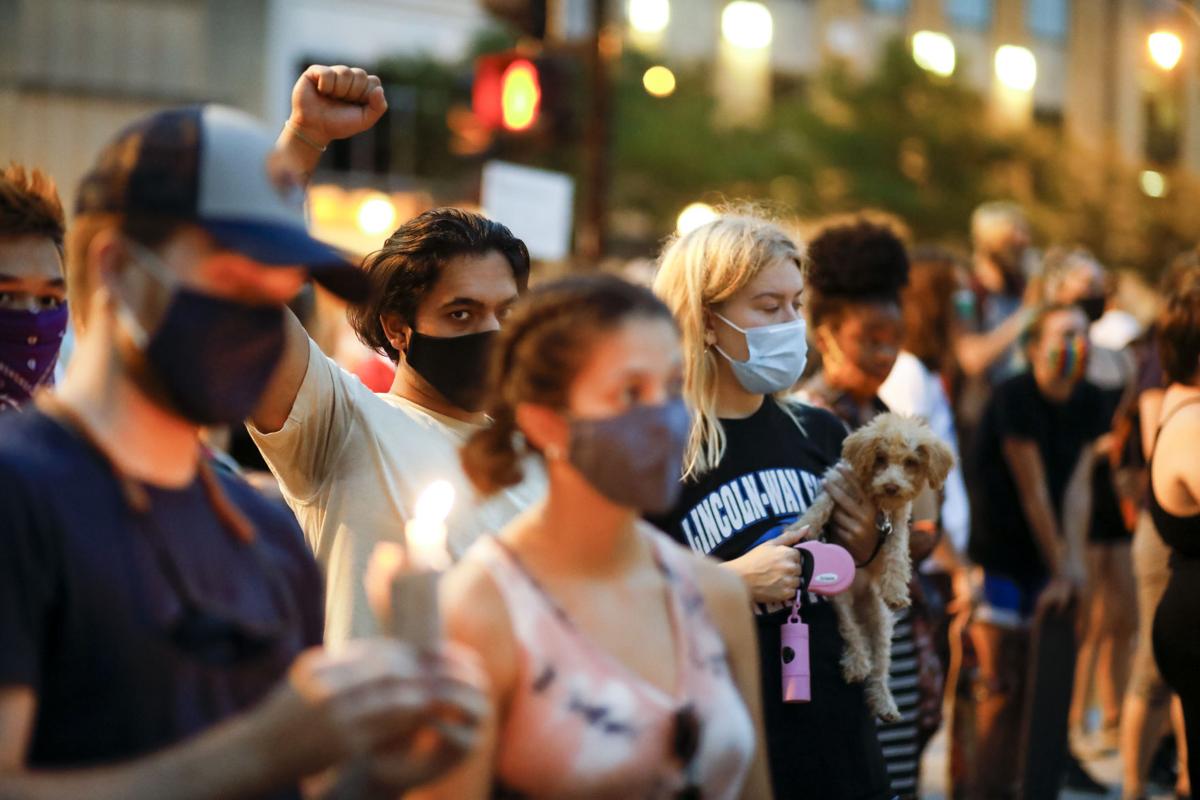 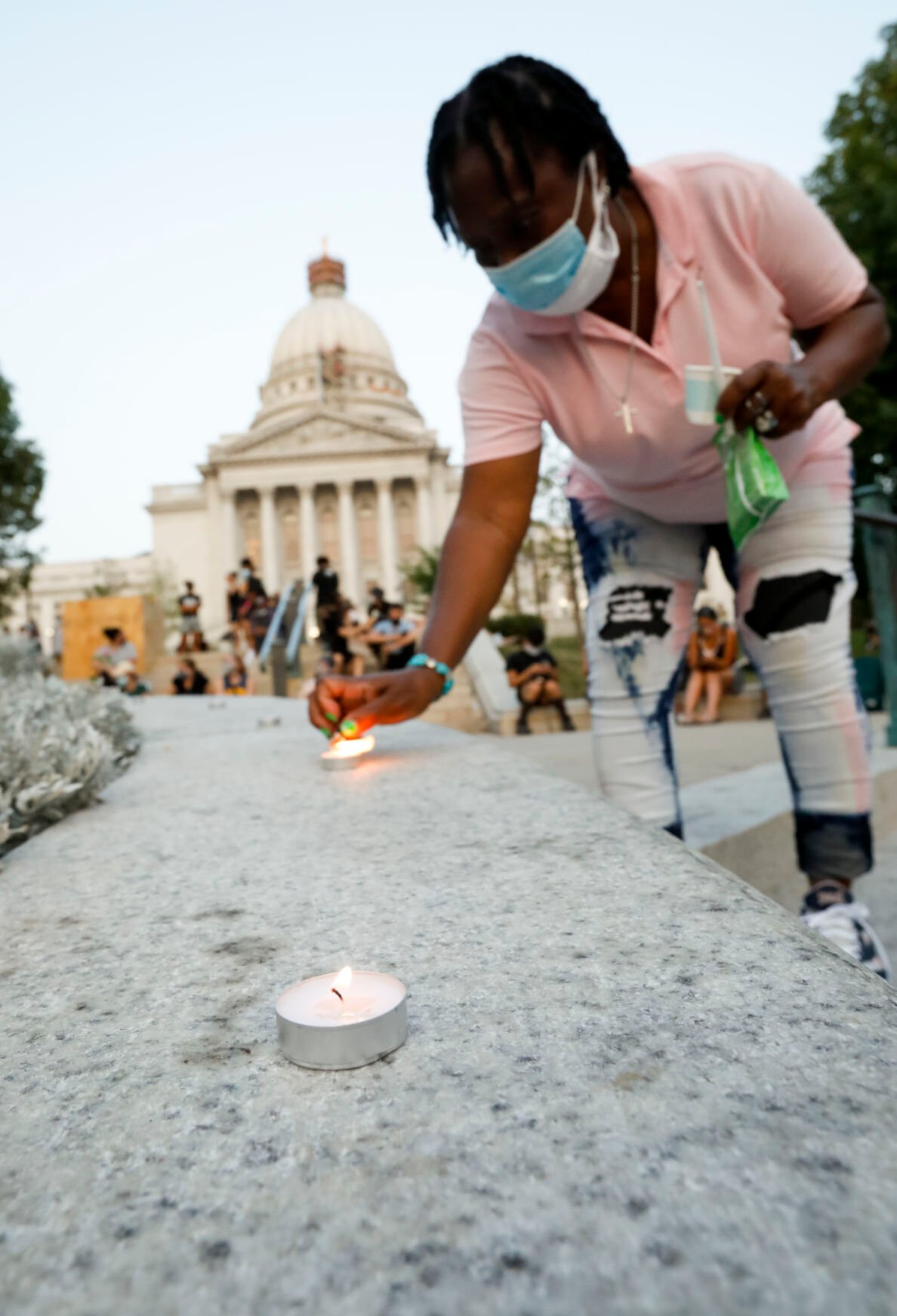 Jewel Adams lights candles in honor of the Black lives who have endured suffering or have been lost at the hands of police, Tuesday night.

Hours before Madison civic and government leaders marched with Tuesday night’s demonstrators, before some broke windows along University Avenue, and before a white man armed with a long gun killed two people at a Kenosha protest, more than 100 people gathered at the foot of the Capitol steps to lay flowers and light candles for the recently departed, the barely spared and the long-mourned.

An image of Anisa Scott, the 11-year-old fatally shot when a bullet hit the car she was riding in on Madison’s east side two weeks ago, hung beside a photo of Jacob Blake, the Black father paralyzed by Kenosha police on Sunday, and familiar faces like that of Tony Robinson, a Black teen killed by Madison police in 2015.

[‘Everyone is in crisis': Madison leaders seek solutions to community violence]

As mourners lit candles, Patience Clark’s voice resonated. “I don’t know how to feel. It seem like everyday it’s something else,” she sang into the megaphone. “Goddamn repetition of history … We’ve been through enough, enough, enough.”

The Tuesday night vigil organized by local nonprofit Freedom, Inc. invited the public to honor those who’ve suffered violence and demand greater economic investment in Black communities. The organization has gained attention for its protests and its four-year campaign to remove police from schools, but the bulk of the organization’s work is with survivors of domestic and sexual violence.

One problem or two?

In the months following the death of George Floyd at the hands of Minneapolis police, Madison witnessed near-daily protests against police violence. Meanwhile, the daytime car-to-car shooting that left Anisa on life support led community members and leaders to call for a solution to the recent spikes in gun violence seen in Madison and in cities across the country.

To some, police violence and gun violence look like separate problems with separate or even conflicting solutions. But to the organizers of the vigil, they are two symptoms of the same problem: that Black communities have seldom had the resources and support they need to thrive.

“People don’t turn to crime because of calculated planning and cost evaluation,” said Lorien Carter, Robinson’s aunt. “They do it because they have no other choice. They lock away our fathers, they kill them, and then they wonder why it is that our young men resort to the streets.”

She told the crowd that Black residents had long fought to stop gun violence and that Black Americans support gun control at higher rates than white Americans do. She pushed back against a focus on “Black on Black crime,” noting that people direct their violence toward the people who live near them and that the most frequent gun fatalities are suicides, though those deaths receive less attention.

“An 11-year-old baby getting her brains blown out becomes something of a fucking trend for y’all, as if we haven’t been protesting gun violence longer than we’ve been able to protest police!” Carter said.

'More police does not fix the problem'

Those who advocate defunding the police often say that other government services have been defunded for years, as budgets for social services and education have fallen over the decades while police budgets continue to rise.

In Madison, Adams explained, the city plans to address budget gaps caused by the economic fallout from the coronavirus by reducing spending by 5% across the board, reducing funding for city services ranging from education and public health to policing.

But due to the terms of a previously negotiated contract, the police department is also set to receive $5 million for a 3.75% salary increase. Mayor Satya Rhodes-Conway has asked to renegotiate that contract, saying “the City cannot afford the terms negotiated in the previous administration,” but the police union has refused.

Freedom, Inc. community power building coordinator Mahnker Dahnweih, who grew up on Chicago’s south side, said she’s seen what it looks like when police spending outpaces other types of spending, and she doesn’t want that future for Madison. In 2020, policing made up $85 million of Madison’s $340.7 million operating budget.

“I’m from a place where, when we were experiencing harm and conflict and violence in our communities, they continued to invest into the police … Today, there’s police on every corner and our people are still hurting, still suffering and still in pain.”

Access to food, quality education, stable housing, economic support and green spaces is what keeps people safe and out of trouble, Dahnweih said. “We don’t need to go far to see what it means to have safe and healthy communities without police. The places where all the people who make our laws and set our budgets are not crawling with police.

“So more police does not fix the problem. Real investment does.”

Her voice echoing off the surrounding buildings, Dahnweih told attendees they would soon march the few blocks to the City County Building, where the mayor and city staff prepare the budget. There, on the glass doors, they would hang pieces of cardboard they had each inscribed with their dreams for a better city, including “a roof for everyone,” “Black wealth,” “free treatment centers” and “Black people unharmed and happy.”

“Change is not only possible, it’s inevitable,” Dahnweih said of the effort to defund police. “When we do tear these systems down, we’re going to need to self-govern to figure out what we do want to build in their place.”

[Activists want to defund the Madison police. What does that mean?]

But just dreaming wouldn’t be enough, she said, imploring attendees to register to vote, volunteer with Freedom, Inc., and fill out the organization’s People’s Budget survey, which asks Madison residents to share their priorities for city spending.

She also invited the group to attend the organization’s first public meeting on community safety. Freedom, Inc. has held weekly meetings to envision alternative models of community safety and is for the first time opening that virtual meeting to the public on Sept. 1.

Without that continued pressure, she said, the cycle of killing — by police and civilians — would continue.

In Madison, the City Council is poised to act as soon as next week on proposals to create an independent police monitor and civilian review board that some say could make the lasting change activists have been calling for. Still, some are concerned the mechanisms won’t be enough.

‘Everyone is in crisis': Madison leaders seek solutions to community violence

Madison Mayor Satya Rhodes-Conway said violence prevention will be a priority in the 2021 budget, along with public health and equitable economic recovery.

Activists want to defund the Madison police. What does that mean?

Although it's become a national rallying cry, the defund movement is short on details.

“We’re not focused or concerned about things that can be fixed,” said Lucille/ Merchant co-owner Patrick Sweeney. “We empathize with the protesters.”

Flowers and memorials cover the circular planter at the top of State Street, on Tuesday, Aug. 25.

Jewel Adams lights candles in honor of the Black lives who have endured suffering or have been lost at the hands of police, Tuesday night.