Critics and supporters alike were out in strong numbers at the event, organized by a third-party consultant working on the environmental impact statement, to help gather public feedback on the recently released draft report. The draft found that while the beddown of F-35 jets would not have a significant environmental impact in some respects, the noise pollution would be “significant” and would disproportionately impact communities of people of color and low-income populations.

The five-hour meeting featured an informational “open house,” a formal presentation by National Guard officials and three hours of oral testimony from a few dozen members of the public.

The meeting came in the wake of a city staff analysis of the draft report, released on Tuesday evening. The memo confirmed that heavily impacted neighborhoods would have high concentrations of racial minorities, families living in poverty, and low-income housing units. It also found that 312 units at a mobile home park, along with some homes immediately outside of a 65-decibel noise contour mapped out in the report, would not be eligible for sound pollution mitigation funding through the Federal Aviation Administration.

For many of the opponents in attendance at the Thursday night meeting, the fact that the noise pollution would disproportionately affect older, poorer and less-white populations was key.

"This is a gross example of no economic justice or environmental justice for working class or poor people," said Deborah Lofgren, who lives on Quincy Avenue, just south of the airfield, who joined an anti-F-35 rally outside the building, as the meeting kicked off.

“We talk a lot about investing in our city, and helping lift all boats of working class and low-income families and people of color. This seems like we're creating, somebody called it a dead zone,” said Marsha Rummel, an alder representing District 6 in Madison who also attended the rally.

Rummel added she was concerned over the ineligibility of mobile homes to receive mitigation funds.

“They've all been there forever,” she said, regarding mobile homes at Oak Park Terrace, due west of the airport. “I don't know what's more permanent than those things.”

Rummel was not the only public official in attendance at the rally outside the building, organized by the activist group Safe Skies Clean Water Wisconsin. Syed Abbas, representing District 12, spoke to the crowd of nearly 100, saying that he’s heard nearly unanimous opposition from his constituents.

"When I go home ... I want to feel peace. If that peace is compromised, we should not allow that, period,” he said.

As opponents mobilized outside, supporters of the F-35 beddown milled about inside the building at the National Guard’s open house, where posters displayed information on the fighter jet, and the findings of the environmental impact statement. Many supporters wore hats and stickers declaring their support for the 115th Fighter Wing of the Wisconsin Air National Guard, the unit that stands to receive the F-35s, and that currently operates a squadron of F-16 jets from the base.

For many supporters, the noise pollution question was a minor inconvenience that was outweighed by the positives they saw with regard to national security and economic development.

“I don't think it's that big of a deal with the noise, to be honest,” Tim Butcher said. “I timed it the other day when I was grilling out. It was like, two to three different incidents, less than 20 seconds apiece.”

During public testimony, supporter Pat Richter said that the F-35 beddown presented an opportunity to avoid an economic loss comparable to the departure of Oscar Mayer or Rayovac.

"There was nothing we could do to save those jobs. In this case, we can do something, by continuing the tradition of excellence at the 115th,” he said.

While the 115th Fighter Wing of the Air National Guard would not shut down as a direct result of the F-35s going elsewhere, proponents of the beddown argue that it could put the base at risk of shutting down the long term. The Chamber of Commerce, which has long advocated for the beddown, has cited National Guard statistics asserting that the base contributes about $100 million to the local economy each year.

About equal numbers of supporters and critics gave oral testimony during the latter portion of the meeting. Many spoke on behalf of organizations: Groups in favor of the beddown included the Chamber of Commerce, the Badger Air Community Council, Veterans of Foreign Wars and the Wisconsin Laborer’s District Council. Groups opposed included Physicians for Social Responsibility and the Party for Socialism and Liberation.

Public testimony yielded multiple complaints and concerns over the draft environmental impact report’s findings, particularly the noise projections. Chris Arenz, executive director of the Badger Air Community Council, said they felt the report overestimated the number of takeoffs and landings that would happen at the base, resulting in inflated noise pollution numbers. Others questioned the frequency with which the jets would use afterburner during takeoff, suggesting the estimates were on the low side.

Many proponents said their support was a reflection of their support for the military, and said that the beddown would make the community, and the country, safer. Critics called into question the F-35’s expense, its capacity to carry nuclear weaponry, the Air National Guard’s history of PFAS pollution, and the impact noise pollution would have on local schools. Some called for the departure of the Air National Guard from Madison altogether.

Testimony was largely civil, although some speakers expressed anger and frustration.

"I imagine you probably think of yourselves as sophisticated. After all, you've invented these million-dollar planes that some call 'computers that can fly.' These computers that can fly are capable of incinerating our entire planet,” said Tom Boswell, addressing a panel of Air National Guard officials witnessing the testimony. “I really think you shouldn't be playing with toys that are such a danger to our planet.”

“Anyone who speaks about noise should be carded to see if they really live near the airport,” declared one supporter, Ken Ackerman.

A number of speakers said that more needed to be done with regard to noise pollution mitigation should the F-35s come to Madison.

“Let's all get together, over in the neighborhood by MATC,” said Scot Ross, the former director of One Wisconsin Now. “Let's grill some brats. I'm sure there are some people in here who would drink adult beverages. Let's come up with a solution that takes care of those folks, and the people who are in the neighborhoods.”

The National Guard Bureau will continue collecting public feedback on the draft through Sept. 27. After that, it says it will publish a final draft in early 2020 for the Air Force to consider as it makes a final decision.

The City Council will take up the resolution Sept. 17.

Editorial: It’s not NIMBYism to express concerns about F-35s

Madison has a reputation for asking tough questions regarding new plans and projects. Sometimes, Madisonians are accused of engaging in knee-j…

Jessie Opoien: The Air Force’s F-35s will be a boon to Madison and Wisconsin, but we have to do it right

As the community and the Air Force take the next steps toward a final decision, we have an opportunity to work together to propose solutions, reach compromises and forge a partnership that benefits all of Madison.

The Wisconsin Air National Guard has organized a public meeting on the potential basing of F-35 fighter jets in Madison at the Alliant Energy Center on Thursday.

The adopted resolution asks the Air Force to reconsider the selection of Truax Field as a preferred location until and unless impact study results are shown to be misrepresented.

The Madison School Board adopted a resolution asking the Air National Guard to reconsider bringing F-35 fighter jets to Truax Field. The resolution cites noise concerns for nearby schools and students, as well as the anticipated disproportionate effect on low-income and minority populations. 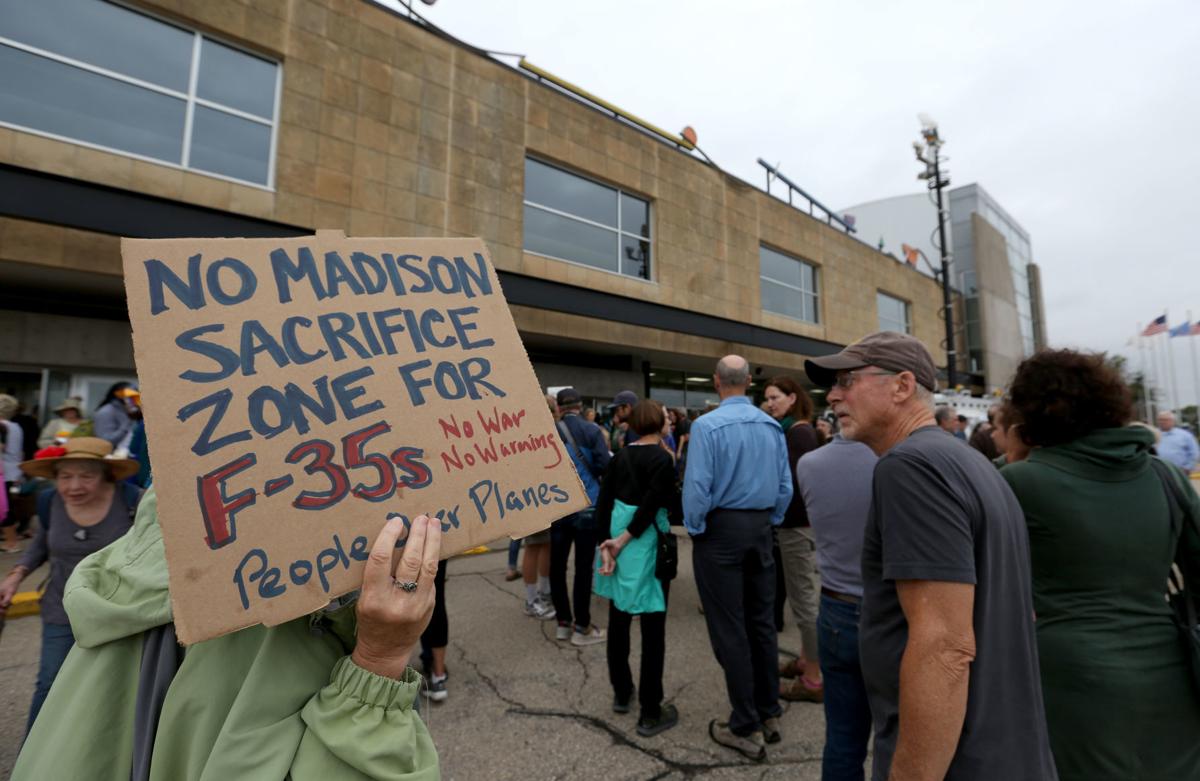 A sign in the crowd before a meeting with the Air Force on the F-35 environmental impact statement held at the Alliant Energy Center in Madison. 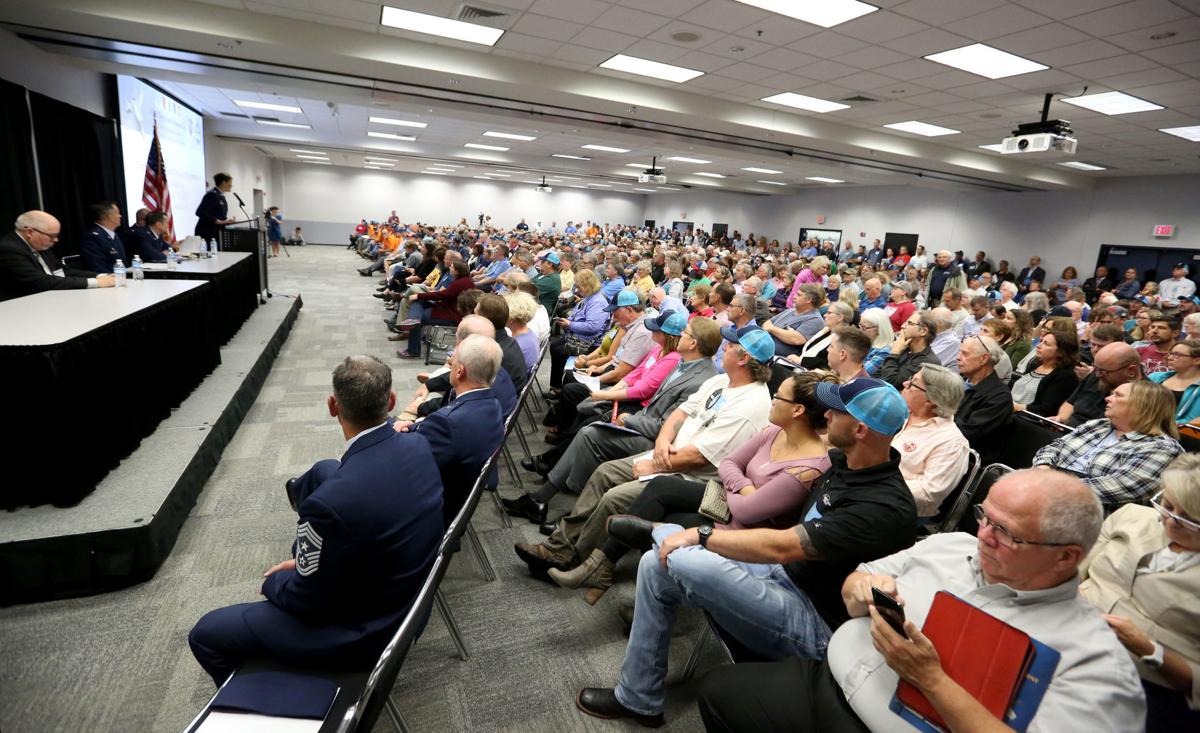 The hearing drew a standing room crowd, with both proponents and opponents in attendance. 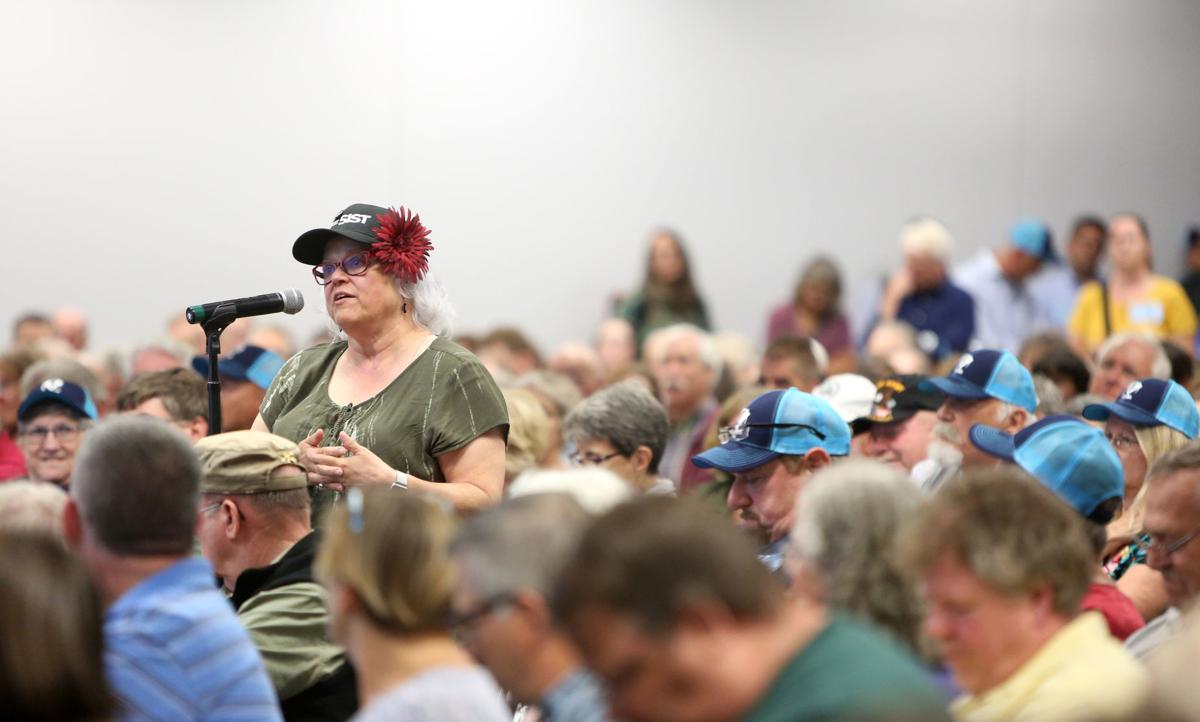 Deborah Lofgren, of Madison, speaks during a meeting with the Air Force on the F-35 environmental impact statement held at the Alliant Energy Center in Madison.