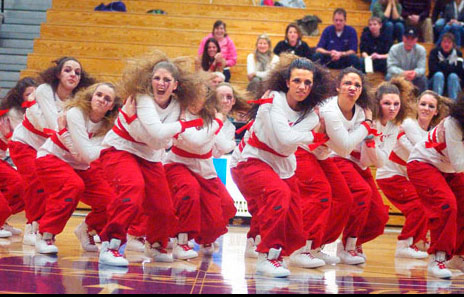 The Waunakee High Dance team will alter its 'Psych Ward' straitjacket costumes in time for Saturday's state meet after complaints they were insensitive toward people with mental illnesses. 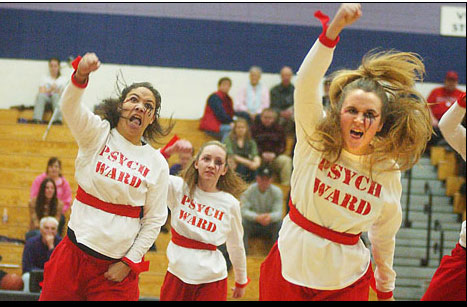 Waunakee High School's varsity dance team is headed to a state competition today, but advocates for the mentally ill are upset by what got them there — a "we get crazy" routine featuring all 18 dancers bouncing to hip-hop music, their hair wild, heavy black makeup on their snarling faces, and costumes made to resemble straitjackets and restraints with the words "Psych Ward" on them.

News of the routine spread fast this week after photos of the dancers in their costumes were published in the Waunakee Tribune. "The pictures are quite disturbing," says Hugh Davis, executive director of Wisconsin Family Ties. "We had parents and kids with mental health issues standing in the office with tears in their eyes. This brings up painful memories. It is incredibly insensitive."

On Friday officials at the high school, responding to complaints from local advocates and parents upset by the routine after they saw it at a basketball game last week, announced that the team is scrambling to alter the costumes before their meet by spattering them with paint to obscure the words "Psych Ward."

In addition, says Waunakee High activities director Brian Smith, the team will read a brief statement before they compete tonight at the Wisconsin Association of Cheer/Pom Coaches state meet in La Crosse.

"A few words about our routine tonight. It has recently been brought to our attention that our previous costumes were insensitive to people who experience serious mental illness. We didn't realize when we came up with the idea what impact it could have on people who have mental illness or who have family members with mental illness. As a result of our heightened awareness, we have altered our dance costumes for this state competition. We assure everyone that this routine was never intended to hurt anyone's feelings and we apologize to anyone we might have offended," reads a draft version of the statement provided to The Capital Times. The statement was put together with the help of the National Alliance on Mental Illness-Wisconsin (NAMI).

"We hope that the media doesn't grind up our girls as they tend to do sometimes," Smith says. "There was no malice intended at all."

Erin Cotter, the team's head coach, says she is taken aback by how upset people are about the routine. "I don't understand where they are coming from," she says. Hip-hop is all about being "bold," she says. Last year, a competing team dressed in orange jumpsuits pretended they were prisoners, she says. "The whole point is to get people pumped up and energized. Our intent had nothing to do with mental illness. Our total intent was just a hip-hop dance and the songs and the words that were popular. The thought never crossed my mind or the school's or the parents' or the kids' that it was about mental illness."

But one parent who saw the team win first place last week at the regional meet says it sure seemed obvious to her that the dance was about mental illness. "I understand that hip-hop is a rough style of dancing, and I wouldn't have had a problem with the music they were playing, or the scary wild hair and makeup," says Karen Furmack from Raymond. "It was the straitjacket tops saying 'psych ward' on them. There was no other way to interpret that."

The 2-minute 20-second routine consists of the troop dancing to four different songs, including "Get Out of Your Mind," "I Get Crazy," and two mixes, one starting with the sound of laughter. At one point in the dance, the performers wrap their arms around themselves as if they are being placed into a straitjacket, according to photos and one observer's description. At another point, they thrust their fists, decked with red ties at their wrists that resemble the hospital restraints used to control psychiatric patients, into the air.  Photos capture the performers grimacing and opening their mouths as if they are screaming. Other times, according to someone who saw the show, they put their heads between their hands and shake them back and forth.

Davis and other advocates say they fear that this kind of portrayal of mental illness will only add to the stigma that already makes too many people ashamed and afraid to ask for help. (Research shows that there is a often a signficant gap between the time when people first experience symptoms of mental health problems and when they actually seek treatment.) "We know there are kids in that high school who are currently receiving mental health treatment. There are probably kids in that high school who have had to be hospitalized for mental health treatment. How would they feel seeing this? I can't even begin to imagine that," Davis says.

Given the 10 hours a week of rehearsals the team has put in, advocates are not asking that the performance be scuttled. "That would be unfair," says NAMI's Jennifer Lowenberg. They are asking that the dance controversy leads to more education and awareness at Waunakee and other local schools. "Mental illnesses are biological illnesses that can affect people in all walks of life," Lowenberg says. Spreading that message, she says, "would be how to make the best out of a pretty awful situation."

Such education would be a good thing, agrees Furmack, the Raymond mother whose daughter is on another dance team that competed in a different event. What disturbed Furmack almost as much as the dance itself, she says, is that few other people in the audience seemed to be as horrified as she was.

A few songs earlier, another team's dance was a tribute to cancer survivors. There wasn't a dry eye in the place, Furmack recalls, with dancers crying and the audience crying. "Then they come out with this thing," Furmack says. "It's such a contradiction, to have such compassion for cancer, and no compassion for mental illness. How many people sitting in that audience might have had a mental illness or had a loved one with a mental illness? And to have to sit through that ... It's not funny when you know somebody who's suffering."

Routine that offended advocates for the mentally ill, minus the words "psych ward" on straitjacket costumes, wows judges for Wisconsin Association of Cheer/Pom Coaches championship contest.

The Waunakee High Dance team will alter its 'Psych Ward' straitjacket costumes in time for Saturday's state meet after complaints they were insensitive toward people with mental illnesses.