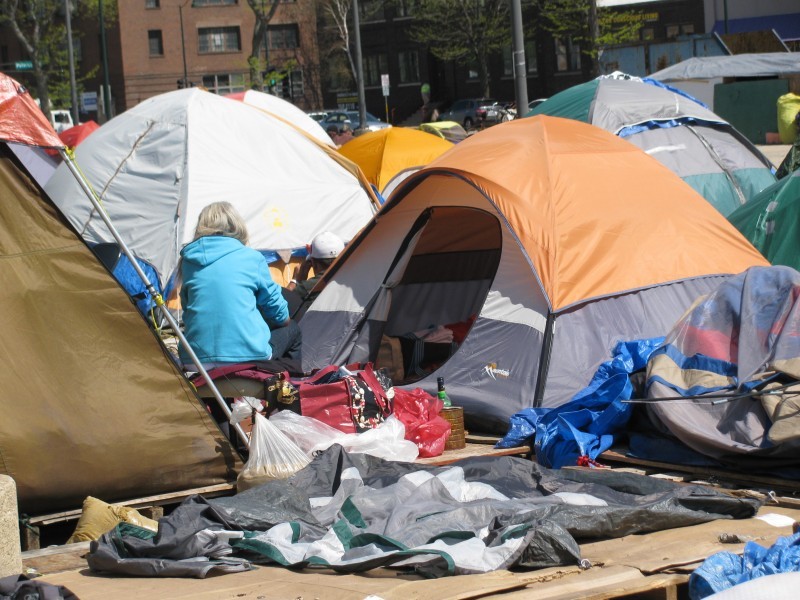 The Occupy Madison encampment is shown here with a tent brought down by high winds in the foreground. 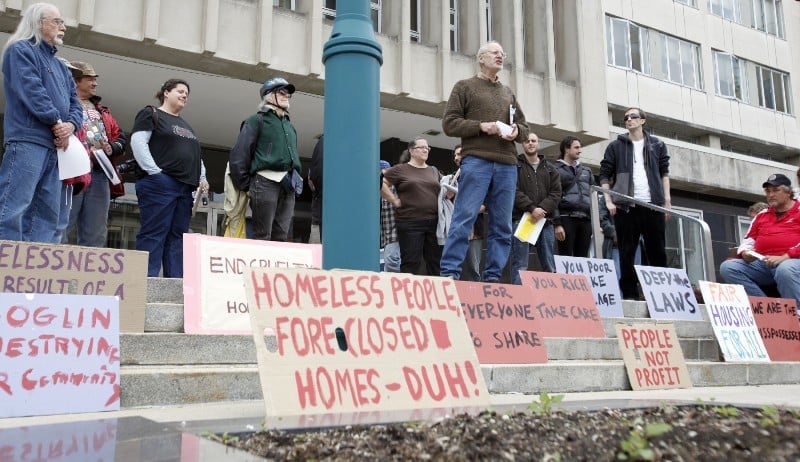 Allen Barkoff (center) of Madison speaks in front of the City-County Building on Monday in Madison.

“It was an intolerable situation,” Mayor Paul Soglin said Monday evening of the Occupy Madison homeless encampment on East Washington Avenue, after a Dane County judge declined to issue a temporary restraining order to prevent the city from closing it down.

“The kind of health issues and crime problems we had on this site are not covered by the First Amendment, I think that’s very clear,” Soglin said.

He said that the city would wait until noon Tuesday to evacuate the site, to give people a chance to pack their things and leave.

Police calls to the Occupy site at a city-owned former car dealership in the 800 block of East Washington Avenue included some serious incidents, Soglin stressed. “We are treating the site as a hazardous waste site -- no employee going in is going to touch anything. We’ve had numerous reports of needles.”

About an hour earlier, Dane County Circuit Court Judge Amy Smith told pro-bono lawyers who sought a temporary restraining order in the name of three homeless people that they had not provided convincing evidence that clearing the site would trample the occupants’ First Amendment rights of assembly and free speech. In fact, there was evidence that occupants had participated in protests at other locations in the city while living at Occupy Madison, Smith pointed out.

At about the time that Soglin spoke with reporters at a community budget session at Wright Middle School on the south side, about a dozen protesters gathered in the hallway outside Soglin’s office in the City-County Building downtown were ordered to leave by police officers. All but one man -- Allen Barkoff, 69 -- obeyed; he was arrested and charged with trespassing.

Ann Lyttle, who had been among the protestors in the hallway, told me that they were headed back to the Occupy site, where people already were packing up their things. The East Washington site may be coming to an end, “but I don’t think Occupy Madison is ending at all,” she said.

Earlier in the day, a small group from Occupy Madison and their supporters marched to the City-County Building to flex their political muscles. About 15 protestors, with supporters outnumbering homeless people, stood on the Martin Luther King Jr. Boulevard steps behind signs calling for rights for the dispossessed and for compassionate treatment of the poor. The group then moved inside the building to sing outside Soglin’s office, and then sit down in protest.

Monday was the day a state camping permit expired on the site where Occupy Madison has been since November; the petition for a restraining order was an effort to buy time to find a new site. “It felt like the next step to take,” William Gruber, one of three named petitioners in the lawsuit, said Monday afternoon outside the City-County Building.

The encampment -- a local iteration of the Occupy Wall Street movement that swept the country last year -- has pitted Occupy Madison participants and their supporters against Mayor Soglin, who has been adamant in his insistence that the site be cleared with the expiration of its permit, despite emotional pleas.

The East Washington Avenue site remains a public forum for political speech, occupants of the encampment say in the lawsuit filed last week. One piece of evidence in that regard is the “Recall Soglin” signs that have been posted there since the mayor led opposition to a proposed extension of the permit, which the City Council rejected two weeks ago.

Retired technical college teacher Barkoff told the crowd outside the City County building Monday that Occupy Madison, in addition to providing housing for the homeless through a Wisconsin winter, has developed a number of action groups that in recent weeks staged protests against the American Legislative Exchange Council -- a potent conservative think tank -- and corporate banking practices.

But the mayor calls such claims of political purpose a “myth,” used to obscure illegal activities. “If all this had been going on in an apartment building, every Madisonian would demand that the city go in and do something about it. And we are,” Soglin says.

Homeless people who live on the site and their supporters admit that there have been problems -- primarily connected to alcohol and the disruptive behavior that sometimes accompanies it -- but they insist that activities like building hoop houses where some live, providing meals and creating rules for behavior are empowering.

The homeless people who turned to the courts for help “place a very high value on the community they have created,” they said in their lawsuit. “Many express that it feels like a family and without that location, they would be forced to stay in dispersed, unsafe and unsanitary places.”

Without Occupy Madison, there is no place in Madison providing long-term housing that includes a place to sleep during the day, storage for personal property, or food or bathrooms during the day, the plaintiffs in the lawsuit said.

But the mayor just doesn’t buy the argument that Occupy Madison is helping homeless people in the long run. “It’s not leading to anyone’s mental health improvement, to anyone’s improvement with substance abuse problems,” he says.

A number of private agencies have programs to help homeless people transition to stable housing, and that’s where city resources and energies should and do go, he says.

Occupy Madison’s time on East Washington Avenue may be ended. But UW-Madison student Noah Phillips is part of a fledgling effort to move Occupy to the former Army Reserve site, now mothballed, at 1402 S. Park St.

“There are some folks from the Occupy site who are interested in setting up an intentional community,” Phillips told me Monday. The idea is a communally run community with rules against drinking and drug use, he says, adding that about 15 people from the East Washington site are talking about such a development.

Ald. Sue Ellingson, who represents the area, said Monday she doesn’t think she could support an encampment there. “I think we’ve already made this decision about what can be legally be done and what can’t be done,” she says. “Besides, permanent housing needs to be what we have to try to achieve for homeless.”

What’s more, the Park Street site is owned by the federal government, although the city is negotiating to buy what has been designated as excess property for what is now penciled in as a street extension to improve traffic circulation in the area.

Phillips insists that Occupy Madison should evolve into something that supports the homeless in a more lasting way.

“Occupy evolved out of a political movement; the homelessness was kind of incidental,” he says. “But how can you have a movement for social change and not account for the homeless?” Phillips asks.

Soglin said there’s no way anything like Occupy Madison will take root on Park Street. “The federal government has already told us to enforce the local laws,” he said.

Their four-month welcome up, members of Occupy Madison dismantled their Near East Side encampment without incident Tuesday under the watchful eye of a lone law enforcement officer.

Despite criticism over Occupy Madison, Soglin says he has sound anti-poverty plan

Mayor Paul Soglin championed the poor in his campaign, but his actions so far draw mixed reviews.

After six months on a city-owned lot on East Washington Avenue, residents and supporters of Occupy Madison took down the encampment Tuesday. T…

Members of the Occupy Madison encampment have until noon Tuesday to leave the site on East Washington Avenue they have called home for months after a judge on Monday denied a temporary restraining order that would have prevented city officials from removing them.

The Madsplainers podcast: In a pandemic election, how do you ensure everyone can vote?

The Occupy Madison encampment is shown here with a tent brought down by high winds in the foreground.

Allen Barkoff (center) of Madison speaks in front of the City-County Building on Monday in Madison.