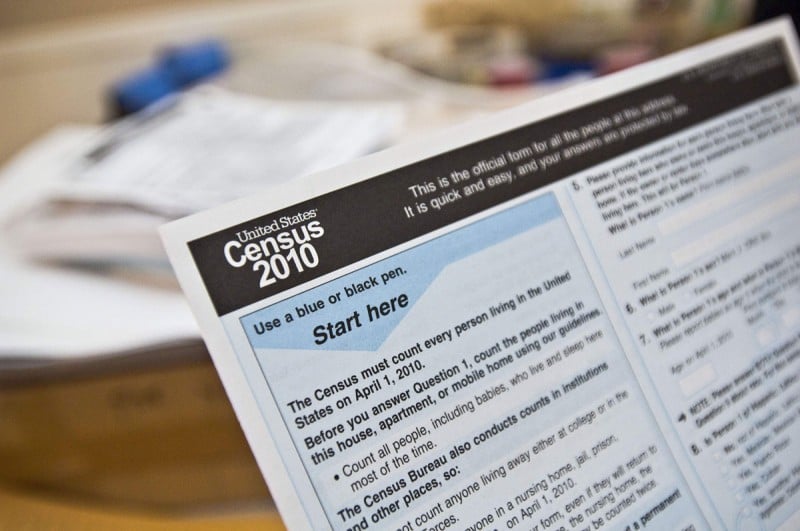 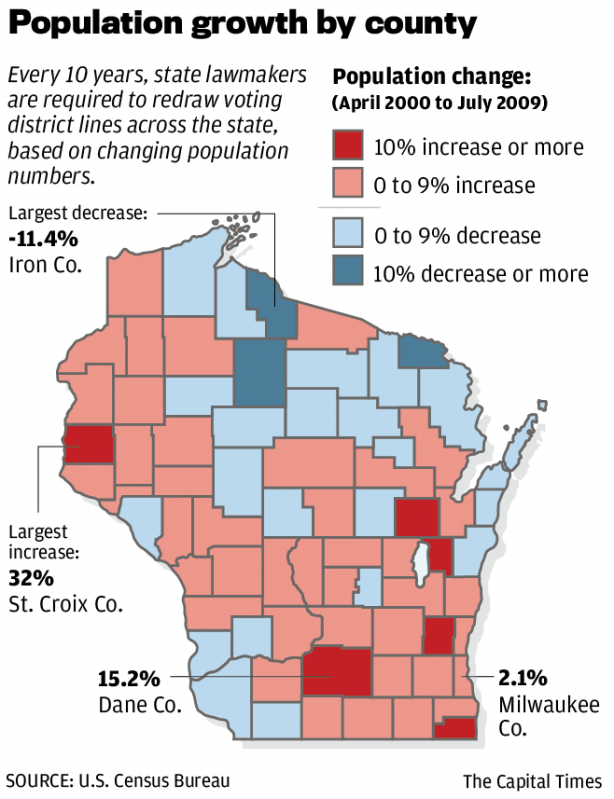 By JESSICA VANEGEREN | The Capital Times |

Since the phrase was first muttered 30-plus years ago by one-term Republican Gov. Lee Dreyfus, the geographic footprint of the capital city has more than doubled. As Madison's borders expanded, so did its population and that of Dane County.

In politics, population leads to regional power. The more people there are living in an area, the more representatives those residents are entitled to in the Legislature, which is why news that Dane County's population has increased by 50,000, enough to warrant greater representation in the Capitol, may be a hard pill to swallow for some lawmakers. At a minimum, it will prompt the highly political redistricting process — a process by which lawmakers redraw the lines around the communities they represent so the districts are all equal in population — to be even more spirited than usual.

"There are many areas in the state that would not like to see Madison or Dane County with more political power," says Mike McCabe, executive director of the Wisconsin Democracy Campaign. "Going back to the days of Lee Dreyfus, there have always been people talking smack about Madison."

Representation becomes more Republican-leaning in counties that border Dane County. Of the three representatives whose districts largely encompass portions of other counties and only a small portion of Dane County, only one, Andy Jorgensen, is a Democrat.

Likewise, of the state senators who represent the interests of Dane County voters, the three whose districts are largely within Dane County — Jon Erpenbach, Mark Miller and Fred Risser — are Democrats. Only the southern-most corner of the county, which falls within District 13 along with a large portion of Jefferson County and most of Dodge County, has a Republican senator, Scott Fitzgerald.

Given the increase in the Dane County population, odds are good that there will be another Assembly member and another senator representing the interests of the county's voters.

"If the population change is dramatic enough, it will become really difficult for lawmakers to redraw the lines without giving more representation to Dane County," McCabe says. "The contortions they would have to draw would be very difficult. It would make them go through redistricting gymnastics."

Every 10 years the U.S. Census Bureau attempts to count every person in the country. The 2010 effort began in March when households across the country first received census forms by mail. About a month later, census workers began making house calls to those who hadn't returned their census forms. The tallying process, for the most part, wrapped up in June. The census numbers will be provided to and reviewed by President Barack Obama at the end of December. By April 1, the official census numbers will be distributed to each state.

In June, the U.S. Census Bureau released population estimates for the country's largest incorporated urban areas. Additionally, the bureau has been compiling two-year population snapshots, known as the American Community Survey, since the last census was completed in 2000.

Both the American Community Survey figures and the "unofficial" census figures released in July 2009 show Dane County growing by about 50,000 residents to roughly 491,000, a 15.4 percent increase.

Those familiar with the census say the numbers now available are unlikely to change much in April.

"The numbers aren't going to be wrong," says Joel Gratz, a consultant with Wisconsin Voices, a statewide coalition associated with State Voices, a national organization aimed at fostering collaboration among nonprofits to encourage civic participation. "The county could be seeing a half seat to a full seat increase."

Because state law requires the state's 99 Assembly districts to be as equal as possible in population, the growth in Dane County will force district lines to be shifted to account for the increase. In addition, because each state Senate district includes three state Assembly districts, some Dane county residents likely will see new state Senate representation as well.

Other areas of Wisconsin are also likely to see changes, especially St. Croix County, which saw the largest percentage increase in population in the state.

Fast becoming a bustling suburb for those who work in the Twin Cities, St. Croix County has seen its population grow to roughly 83,300, a 32 percent increase, over the past 10 years. In contrast, many counties hugging Lake Superior are seeing population decreases, some in the double digits.

In redrawing district lines, lawmakers must also be aware of state constitutional considerations, McCabe says. Besides being equal in population, voting districts also must be as compact as possible, ideally resembling a rectangle or square, and the district parts need to touch, or be contiguous, to one another. But the rules aren't always followed.

In April, the Rose Institute, a California-based research institute known for election, demographic and policy analysis, named Wisconsin's 64th Assembly District one of the 10 "ugliest" in America. The southeastern Wisconsin district that includes Kenosha is barely contiguous in its center and its western border resembles a jigsaw puzzle piece.

"It's not pretty," McCabe says.

A new map every 10 years

The state laws requiring lawmakers to redraw voting district lines every 10 years stem from a series of federal Supreme Court decisions in the 1960s. The last three redistricting efforts in Wisconsin have ended in court, mainly because the Democrats and Republicans can never agree on a final map.

"It's hard to come up with a plan where everyone gets equally screwed," says Mayer, the UW prof.

Regardless of party ties, it is clear from recent election results that incumbents benefit from the redistricting process. In statewide elections since the last redistricting occurred in 2001, incumbents have won 95 percent of the time, McCabe says.

Carolyn Castore of the League of Women Voters in Milwaukee says that politicians, in an effort to keep their seats, fought to keep their districts "non-competitive." A competitive race is typically defined as one in which the candidates end up within 10 points of one another.

"In 2000, a balance of power was struck," says Castore whose group follows redistricting efforts around the state. "Politically, things changed."

Changing how the redistricting process works was brought up on the campaign trail last week when Milwaukee Mayor Tom Barrett, a Democratic gubernatorial candidate, suggested that the Government Accountability Board, not lawmakers, should have the last say in how districts are redrawn.

Although state lawmakers won't get their hands on the census numbers to begin the redistricting process for nearly a year, an effort to put the process in the hands of the public gets under way at noon Thursday at the Capitol.

Sponsored by a number of groups, including the Midwest Democracy Network, George Mason University's U.S. Elections Project, and New York University's Brennan Center for Justice, the forum will be the first step in creating a parallel redistricting process that will put residents, not politicians, in control. It is the goal of the Midwest Democracy Network to have committees in place around the region. Within the past six months, similar forums were held in Ohio and Illinois, with seminars to also follow in Minnesota, Michigan and Indiana. This is the first time such a process has occurred in any of those states.

The aim of the state forums, says Jay Heck, director of Common Cause in Wisconsin, which belongs to the Midwest Democracy Network, is to use software to redraw district lines. A committee made up of voters will be created, with plans for it to begin meeting this fall. At the end of the process, the two maps, one drawn by lawmakers and the other by citizens, will be compared, he says.

"Redistricting isn't on most people's radars because it seems so inside baseball," Heck says. "We want to show that the public can be involved in the process and it can be done in a less-expensive, more transparent way."

Lt. Gov. Mandela Barnes was jobless, paid no income tax as he ran in 2018

Lt. Gov. Mandela Barnes paid no income tax in 2018 and was on BadgerCare while he was unemployed and running for lieutenant governor.

"I want to make sure that the misinformation that is perpetuated out there has been addressed," Bernier said. "Because it is driving me nuts to listen to people."

A panel of three federal judges on Thursday denied a request by the Republican-led Wisconsin Legislature to dismiss a lawsuit that asks the federal court to redraw the state's electoral maps.

U.S. Reps. Gwen Moore and Ilhan Omar are calling on the secretary of defense to investigate "possible mistreatment and/or neglect" faced by Afghan refugees in Wisconsin.