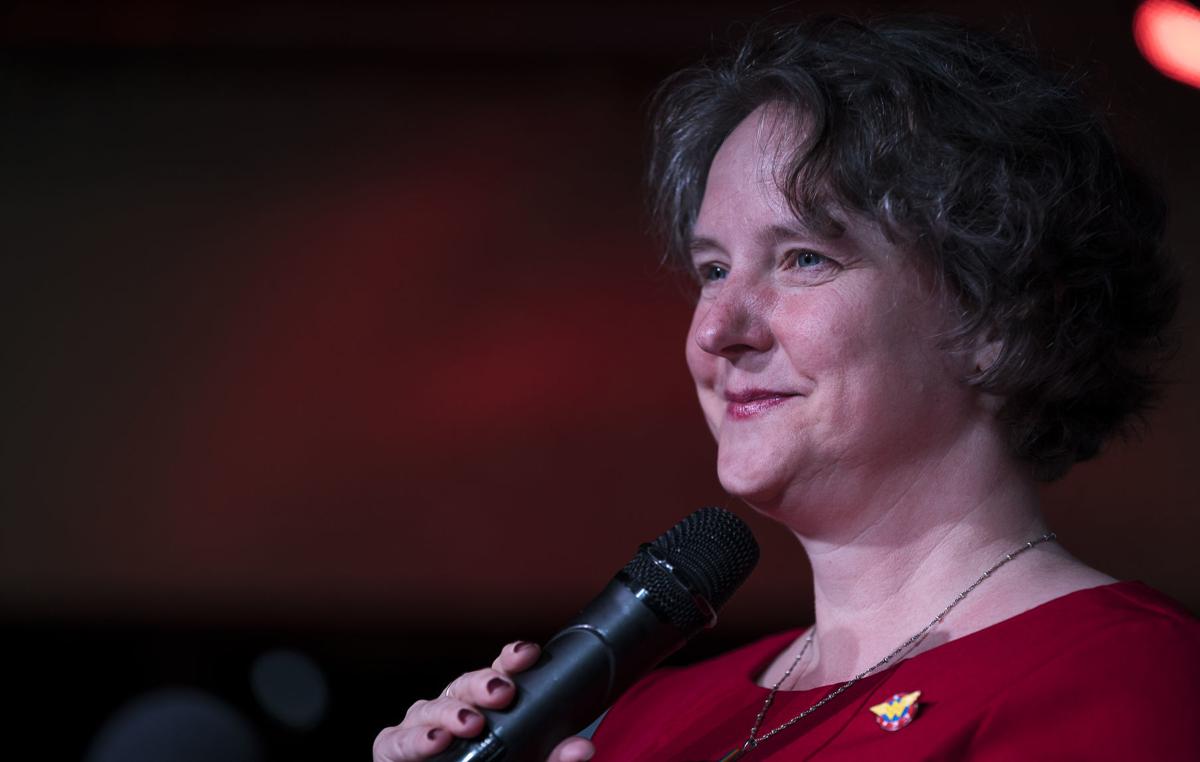 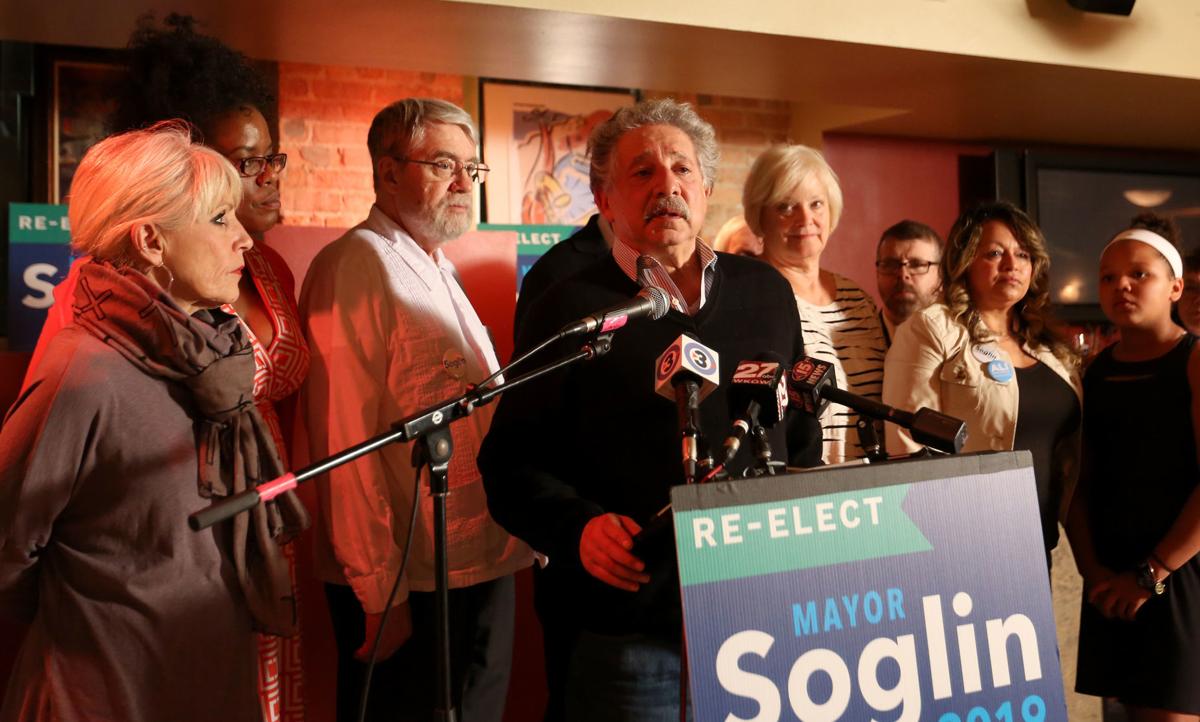 Making history and defeating an incumbent who has served as mayor for 22 years spread over five decades by a decisive margin, Satya Rhodes-Conway will be Madison’s next mayor.

Rhodes-Conway, 47, will be the first openly gay mayor of Madison and the second woman to hold the office. She is a former alder and currently is the managing director of the Mayors Innovation Project at the Center on Wisconsin Strategy.

“Tonight I am full of hope. Hope for young people everywhere but especially here in Madison who have felt left out or talked down to or bullied because of who they are,” Rhodes-Conway said in her victory speech. “I have felt that way once upon a time and look where I am.”

She addressed her supporters from a stage at Prism, a gay nightclub on Madison’s near east side, in the middle of an aldermanic district where she out-polled Soglin by a three-to-one margin.

“I am full of hope for our city hope that we can be the equitable, sustainable city that we want to be, that we can be,” she said. “But I know that I will need your help to make that come true.”

Rhodes-Conway will be sworn into office April 16 at noon in a ceremony in Room 201 of the City-County Building, 210 Martin Luther King, Jr. Blvd. Over the next two weeks, Rhodes-Conway will hire staff and set an agenda.

“We’re going to get to work at 8:00 tomorrow morning,” Rhodes-Conway said, while making her way through a crowd of excited supporters Tuesday night.

Rhodes-Conway said she spoke with Soglin, who congratulated her. She said that she thanked him on behalf of herself and her supporters for his "steadfast commitment" to the city. Soglin was elected to the first of his three stints in office in 1973. He was seeking his third consecutive term in office after first announcing he would not seek the mayor's office again during a campaign for governor last summer.

Rhodes-Conway, who made it clear she was seeking the support of young voters in her campaign, asked those gathered at Prism to stay engaged in city government.

At his campaign party at the Brink Lounge on East Washington Avenue, Soglin said he would meet with Rhodes-Conway on Wednesday to “immediately start on the transition.” In his remarks to supporters, he addressed race relations in the city, one of the big issues in the campaign.

“I take some comfort that I received good solid support form the African-American community and the Latino community in this election and I hope that support will transfer to the new City Council and the new mayor and we will continue making the kinds of progress we have over the last eight years,” he said.

The candidates were closely separated by a narrow margin of 323 votes in the primary election Feb. 19. They advanced to the general election out of a primary against Ald. Mo Cheeks, environmental advocate Raj Shukla, comedian Nick Hart and write-in candidate and the city’s Racial Equity Coordinator Toriana Pettaway.

She has touted her professional experience and the six years she served on the City Council representing part of Madison’s east and north sides from East High School to Warner Park.

Rhodes-Conway’s time on the City Council overlapped with the city’s contentious deliberations over using public funds for the Edgewater Hotel, which she opposed from the start of the project. She also served on the team that negotiated a deal to erase Overture Center’s $28.6 million bank debt and sat on what is now called the Finance Committee for each of her terms.

Throughout the campaign, she has said that the challenges facing Madison — affordable housing, racial disparities, climate change and transportation — are not “unique” or “unsolvable.”

“I think that what we saw in the primary and what we saw tonight is that Madison is ready for a new sense of change and energy and to really work on the challenges that we’re facing,” Rhodes-Conway said in an interview with the Cap Times. “I’m looking forward to doing that.”

Rhodes-Conway’s supporters are also hoping she will usher in a new era for Madison.

Tyler Dovenbarger, 32, has lived in Madison for 13 years and said it is time for a change in Madison. He likes that Rhodes-Conway supports local businesses and identifies as LGBT.

“With all that’s going on with 2016 (presidential election), for example, we need more women in office, more diversity in politics especially locally,” Dovenbarger said. “That’s where you start.”

Zach Nelson-Houstin, 28, said he supported Rhodes-Conway because he thinks Madison needs new leadership, her vision for a more equitable city, her ability to collaborate and willingness to acknowledge Madison’s shortcomings, such as racial disparities.

“(Rhodes-Conway) is very open to new ideas. She has a cooler head,” Nelson-Houstin said. “I think she just works with people better, and I’m inspired by her vision.”

She and Soglin prioritized many of the same issues, including bus rapid transit, the need for more affordable housing, climate change and increasing racial equity during the campaign. They parted ways on a public market and the Judge Doyle Square redevelopment project.

An obvious difference between the two candidates is their style. At several candidate forums, Soglin came off as more aggressive while Rhodes-Conway remained calm. At a forum at the Central Library March 18, Soglin defended his grumpy reputation and said he is committed to the people he represents.

Rhodes-Conway has also emphasized her ability to work with everyone to solve challenges facing the city. At the Central Library, she said it is possible to “disagree without being disagreeable” and that she sees everyone as a potential ally.

Ald. Shiva Bidar, District 5, who was re-elected in an uncontested election, said Rhodes-Conway’s election “represents a new day and hopeful step for the city.”

“I think we will have a mayor that is going to respect the council, the role of the council,” Bidar said. “I think she is somebody that will take the time to listen to the deep knowledge that exists within our communities as opposed to trying to come up with solutions sitting at city hall.”

Rhodes-Conway raised more money than Soglin during the campaign, despite the incumbent’s years in office and name recognition.

Between July of last year and March 18, Rhodes-Conway raised a total of $210,085 compared to Soglin’s $189,294. In a rare move for a local race, a political action committed funded by Milwaukee County Executive Chris Abele delivered an independent, $47,090 mailing in support of Rhodes-Conway.

The latest round of campaign finance reporting followed a six-way primary that stood out from recent races in the amount of money candidates raised and reflected a continuing trend of sophisticated Madison mayoral campaigns.

“Collaboration and diversity of opinions will be hallmarks of my administration,” Rhodes-Conway said.

How she did it: Satya Rhodes-Conway ran a grassroots, door-to-door campaign for mayor and beat a legend

She ousted incumbent Mayor Paul Soglin in a landslide, claiming nearly 62 percent of the vote.

Mayor-elect Rhodes-Conway will be sworn in Tuesday.

The transfer of power in Madison ushered in a new mayor and nine new alders.

Campaigns for Madison mayor during the spring election were costly.

Wisconsin gears up for possible violence at state Capitol