Thousands more patients would require intensive care and Wisconsin could see "a renewed surge in cases" of COVID-19 if the closure of nonessential businesses wasn't extended, Gov. Tony Evers' administration argued in a lawsuit over the state's powers to combat the novel coronavirus pandemic.

The quick actions state health officials have taken, the Department of Justice argued in a reply brief filed with the Wisconsin Supreme Court Tuesday, "have been effective" while saving the lives of "at least hundreds, and quite possible thousands" — without the state overstepping its legal authority.

The filing comes in response to a lawsuit brought by legislative Republicans against top Department of Health Services officials, urging the justices to block the lengthened "safer at home" order, which top GOP lawmakers have decried as an "unprecedented administrative overreach."

But DOJ argued the agency and DHS Secretary Andrea Palm has broad powers to “respond to a rare public health crisis like COVID-19.” The filing added keeping the order would "go far in protecting Wisconsin from overwhelming its ICU and ventilator resources," pointing to an analysis showed keeping the extension as is would mean hospitals would see 17,800 fewer ICU admissions over the lengthened order.

The state's reply late Tuesday afternoon came the same day the court denied a request from a series of unions to intervene in the suit.

The original lawsuit from Republicans, which aims to bypass the lower courts, asks the justices to issue an injunction preventing enforcement of the extension, arguing Palm is unable to issue such an order and that doing so means she "has laid claim to a suite of czar-like powers — unlimited in scope and indefinite in duration — over the people of Wisconsin."

Still, the suit also requested that the court give the DHS six days to promulgate an emergency rule, subject to legislative approval, to extend the order.

That would allow the extension to continue as a Republican-controlled committee is able to insert its own language into the agency's proposal and make other changes to the rule text.

It's possible lawmakers could, at that point, seek to include a plan from the state's biggest business lobby to reopen Wisconsin and implement an algorithm to allow businesses to determine their risk level and assess which precautions they need to take to safely restart their operations.

But Kaul, on behalf of the Department of Health Services, argued that an emergency rule is designed to last five months minimum, while the safer at home order is "not designed for permanence." Rather, he argued, it's a short-term move "to address an immediate and changing problem" that would need to be continually updated as the pandemic progresses.

Conservatives hold a 5-2 majority on the court, which has in recent weeks suspended jury trials around the state amid the pandemic and ordered that judges conduct their operations remotely.

Meanwhile, unions representing Wisconsin teachers, health care workers and transit workers were barred from getting involved in the suit after members filed a motion to intervene in the case arguing they "deserve 'a seat at the table' because they are on the frontlines of this public health battle."

Backers argued the Legislature lacks the legal authority to bring a suit to begin with and that DHS has broad powers to respond to the current crisis. Lawmakers, they argued in one filing, could instead spearhead legislation to "address the defects it now finds in the Department's Order" rather than taking the issue to court.

While lawmakers gave themselves the ability in the December 2018 lame-duck laws to allow a committee to intervene on its behalf in litigation, the Constitution and state statutes still don't allow the Legislature to initiate lawsuits, attorneys for the unions alleged.

It wasn't until Tuesday afternoon, after the unions filed their motion, that members of the Joint Committee on Legislative Organization were asked to vote by paper ballot to give Republican legislative leaders the ability to "represent the interests of the Legislature and continue to be authorized to speak for and defend the State’s interest" in the current case.

Brought by representatives of the Milwaukee Teachers' Education Association, Madison Teachers Inc., SEIU Healthcare Wisconsin and Amalgamated Transit Union Local 998, members in their separate motion to intervene argued the case's outcome will "intimately affect all of the Union members and the people they care for and love."

"They will literally remain healthy, get sick, or die, depending in large part on how this Court rules," it said. 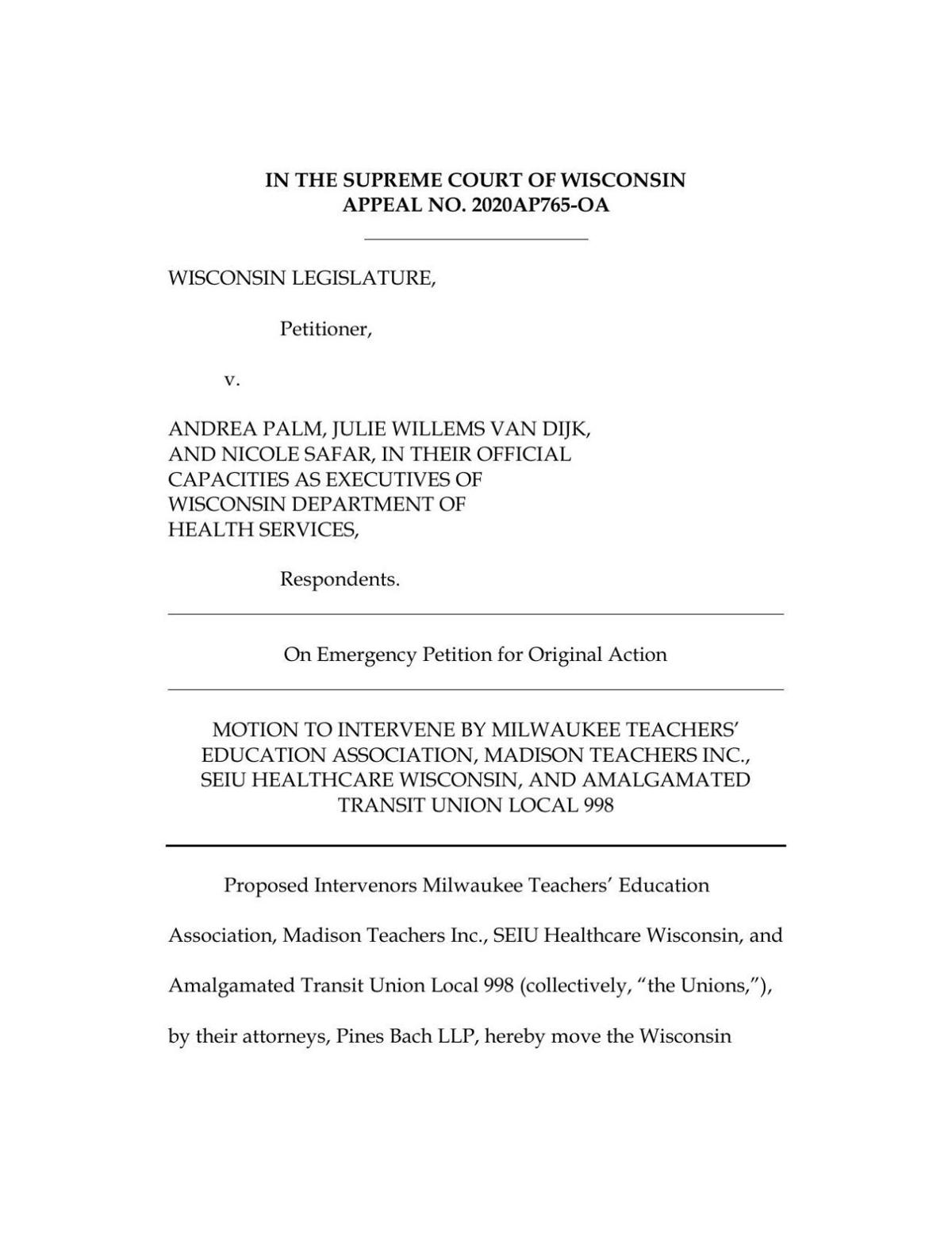 But hours after the unions' motion was sent in, the court issued an order denying their request to intervene.

Other non-parties interested in filing amicus briefs in the case have until Wednesday afternoon to file briefs with the court.

Dane County Executive Joe Parisi last week signaled county attorneys would be filing briefs backing DHS, saying in a statement: “If this order is lifted prematurely, countless lives will be lost, our economy will be plunged into even more of a shamble, and we will experience a second wave of COVID-19 worse than the first.

Republicans have until Thursday to submit their response.

Gov. Tony Evers rolls back restrictions in Wisconsin for some nonessential businesses

The effort, inspired by a proposal from GOP Sen. Chris Kapenga, would reopen businesses starting May 4.

The move comes after Democratic Gov. Tony Evers' administration last week lengthened the state's "safer at home" order from April 24 to May 26.

What would it take for Wisconsin to hold a mail-in election?

The logistics and timing of pulling off the move in Wisconsin — even if the political will to change state statute was shared — would be tough to overcome.

Court strikes down Evers' stay at home order; Dane County implements its own

The court ruled 4-3 to block Gov. Tony Evers' administration's extension of the so-called "safer at home" order Wednesday. The order was set to expire May 26.