Gov. Tony Evers signed an executive order Monday forming a nonpartisan redistricting board that he said would propose maps that "would truly be the people's."

The Democrat's order creating the commission came after he teased the effort in his State of the State speech last week — a plan that received swift scrutiny from Republican leaders, who questioned its constitutionality.

But Evers refuted their criticism in a Capitol news conference and touted the effort as a way to increase accountability in the Republican-controlled Legislature, where he noted proposals such as accepting federal Medicaid expansion dollars have died.

“I’m more than happy to accept a loss if the Legislature votes it down, but because things are gerrymandered the way they are, people feel comfortable saying to their leadership, ‘You decide whether we do this or not,’" he said. "I would think the people of Wisconsin would like to see what their legislators feel about things."

Under the executive order — Evers' 66th — those who make up the commission would hold public hearings around the state and draw, in Evers' words, "fair, impartial maps" that could be included in the state budget, for example, or introduced as a separate bill.

But the effort could simply be removed by the Legislature or ignored in lieu of a different, likely Republican-backed proposal to redraw the lines.

"I will have no doubt we will do it the way we always have, which is to follow the Constitution," Vos, R-Rochester, said of the state's approach to redrawing district lines next year.

Still, Democratic Attorney General Josh Kaul Monday argued the approach was constitutional, saying the public is now only "allowed to have input into what the maps look like, but that's how it should work."

The body, called "The People's Maps Commission," would begin drafting its proposed maps after the 2020 Census data is given to the states next spring.

Evers said the commission's membership would be determined by individuals — not politicians, lobbyists or officeholders — who volunteer, and the body would be created from that list.

Asked about funding for the board, Evers said the costs would be covered by the Department of Administration, but he doesn't expect "it'll be extraordinarily expensive" given the body would be made up of volunteers.

Nonpartisan redistricting isn't a new proposal from the first-term governor; in his budget, Evers sought to adopt such a process, though Republicans removed that language from the two-year spending plan.

In Wisconsin, congressional and state legislative district boundaries are drawn by lawmakers and passed by both houses following the federal census, with review by the governor. Frequently, those maps end up being drawn by the courts under cases of disagreement between the two branches.

Kaul said having a nonpartisan body drawing the maps "could save the state likely millions of dollars in litigation costs."

Still, it's likely the effort could still end up in court, as divided government is likely to continue after the next round of legislative elections this fall. Evers later admitted the courts likely could be involved and he clarified his order wasn't aiming "to stave off lawsuits" but "ensure the people of Wisconsin are choosing their elected officials."

Wisconsin's current legislative maps are a product of complete Republican control of state government, when the Legislature was able to implement its own lines with the approval of then-Gov. Scott Walker.

The district lines were ultimately challenged in federal court, and a three-judge panel ruled the boundaries of Milwaukee-area Assembly Districts 8 and 9 would need to be changed to better reflect Hispanic representation in those areas. When the Legislature didn't act to amend the lines, the court in 2012 issued a new order doing so.

Federal judges also moved to invalidate the Assembly district lines in 2016 as an unconstitutional partisan gerrymander, though the U.S. Supreme Court in June 2018 remanded the case back to the lower court, and the effort was abandoned following a new federal ruling earlier this summer.

Gov. Tony Evers officially unveiled his $8.6 million package of eight bills aiming to bolster farmers and rural communities a day after he announced the effort in his State of the State speech.

Gov. Tony Evers in his second State of the State speech Wednesday night announced a slate of measures to address the state's farming crisis and form a new nonpartisan redistricting commission.

As the state gears up for the next round of map-drawing, the issue will likely end up in the courts like it has during past instances of redistricting under a divided government.

The nine-member People's Maps Commission, created by Evers earlier this year, is gearing up for the release of the new U.S. Census data in the spring through a series of public hearings exploring different aspects of the redistricting process. 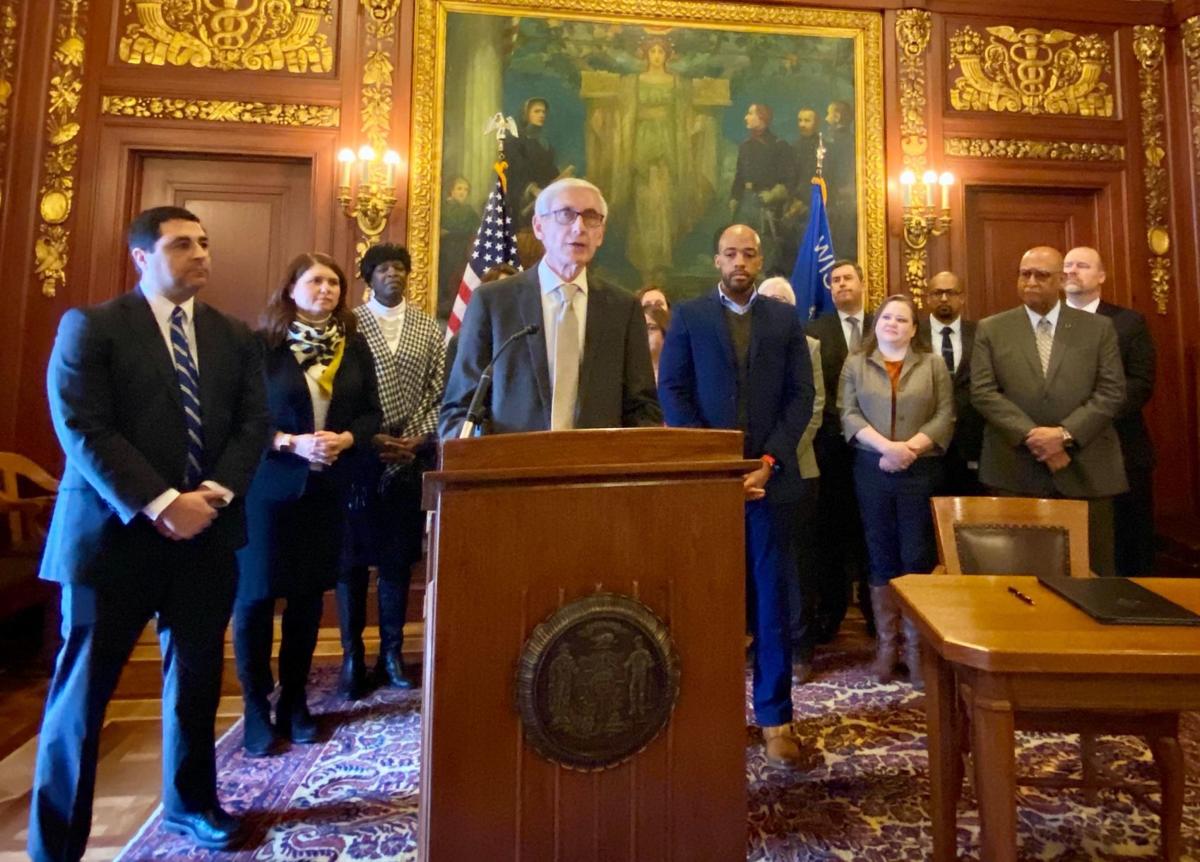 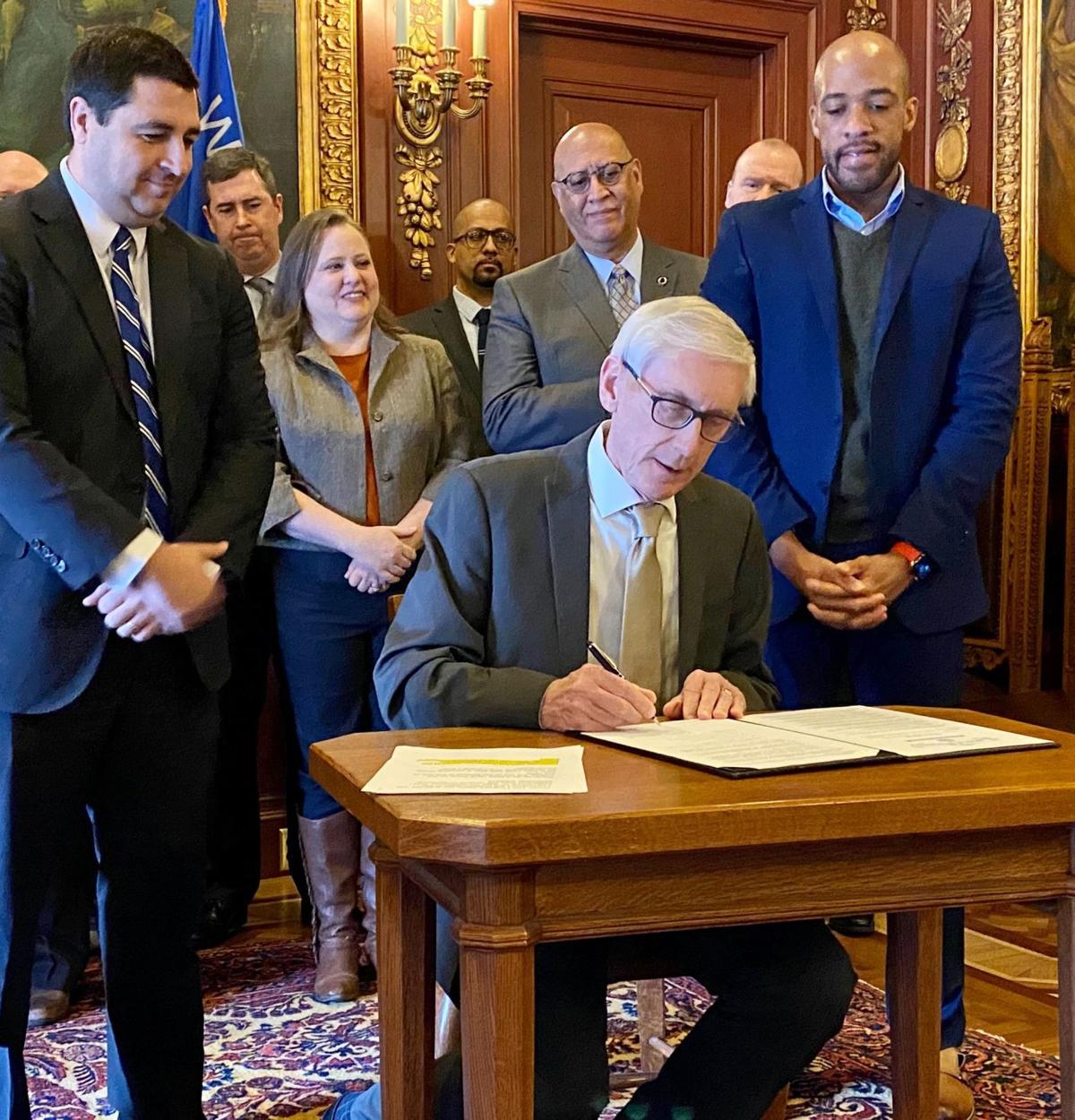