Two Democratic lawmakers want to get rid of what they're calling the "sub-minimum wage" that Wisconsin waitstaff earn, a move that would align the state with seven others that have repealed the measure.

The proposal, from Madison Rep. Francesca Hong, a restaurant owner, and Milwaukee Sen. Chris Larson, would nix the state's tipped minimum wage, by which employers pay tipped workers as little as $2.33 per hour, nearly $5 below the state and federal minimum wage of $7.25.

"We're really keeping some restaurants from being bad actors and working toward a greater vision of restaurants that have equitable pay structures," Hong said during a virtual news conference Monday. 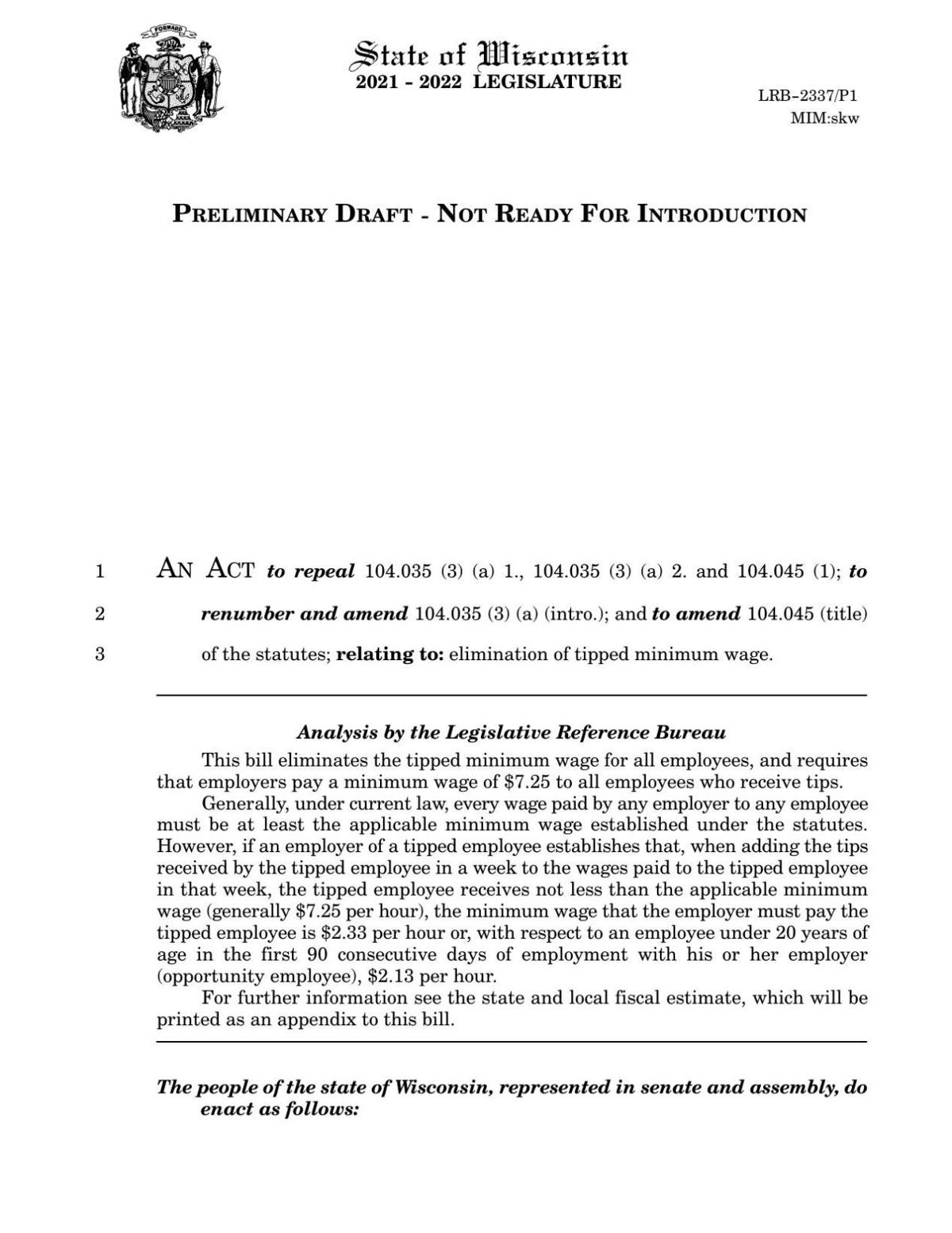 Despite the difference in base wages between servers and restaurant workers who are not tipped, the reality often means that waitstaff, especially those in high-traffic locations, make significantly more than dishwashers and other kitchen staff.

Madison restaurant owner Josh Berkson said that was the case at Merchant and Lucille on the Capitol square, where staff came to realize the "pay inequity was really pointed straight at the kitchen."

It wasn't until the COVID-19 crisis hit that the restaurants embraced an effort "to re-compensate differently" by eliminating the tip credit, creating a base pay and sharing tips across all hourly staff, Berkson said.

"I think it's very, very important to take economic and entrepreneurial focus in terms of making sure that we can telegraph that this is possible and that this is exactly what the industry needs to telegraph," he said.

Industry professionals have increasingly been questioning the value of tipping in their business model, as it gives owners less control over the money that comes into their businesses.

Seven other states — California, Oregon, Washington, Nevada, Minnesota, Montana and Alaska — have all eliminated the tip credit. Meanwhile, national discussions about raising the federal minimum wage to $15 would also include eliminating that lower tipped wage seen in restaurants across the country.

The Wisconsin Restaurant Association in a statement said it supposed having "a discussion" over the current federal minimum wage, but added now isn't the time to raise it or eliminate the tip credit, which the group said "incentivizes servers to deliver excellent service, enables customers to reward servers for great service, and allows restaurants to keep labor costs in check."

"If the tip credit is eliminated, many restaurants would terminate tipping, raise prices to cover higher wages, and move to an hourly wage-only system," the statement continued. "Tipped employees would likely earn less than they currently do."

Under the Wisconsin bill, employers would be required to pay $7.25 an hour to all employees who receive tips. That new base floor would go into effect immediately, rather than gradually.

The legislation, which began circulating for co-sponsors on Monday, wouldn't eliminate tips or stipulate how tips should be doled out among staff.

The bill announcement came in the days after Wisconsin's Department of Health Services made restaurant workers eligible to receive the COVID-19 vaccine.

Officials on Friday updated their website to note that chefs, servers and hosts are able to receive a shot given their role in the food supply chain.

The bills target issues that have vexed GOP legislators over the course of the COVID crisis, including Evers' ability to direct federal relief money as he sees fit and his repeated mask and public health orders.

Republican lawmakers: The budget (road)show must go on

The Joint Finance Committee is planning to hold a mix of virtual and in-person hearings on the $91 billion budget in the weeks ahead.

The Senate and Assembly's floor periods Tuesday featured a host of proposals that have been brought back this year after similar efforts died last session.