The Republican-led Wisconsin budget committee has retained legal counsel to represent the panel and sign a confidentiality agreement that leaders say should assuage concerns from Attorney General Josh Kaul and allow the Democrat to share details of ongoing legal cases with them.

Those concerns — namely, lawmakers' refusal to sign nondisclosure agreements during a closed-session Joint Finance Committee meeting on Tuesday — prevented Kaul from briefing them about pending settlement agreements in which the state is involved.

The agreement binds the members of the committee, according to the contract between the panel's lawyer and the co-chairs, although individual members didn't sign it. But the four Democratic lawmakers who serve on the committee say they weren't aware the agreement was being signed.

Kaul is required under the December lame-duck laws that curbed the power of the AG before he took office require him to seek permission from the panel before settling a case, among other measures. Tuesday was the first time Kaul officially brought a case he's working on before the body for review.

During the open session portion of the committee's meeting this week, Kaul said there could be "significant harm to the state" including financial ramifications if lawmakers don't sign the agreements. He added he wouldn't move forward without signed confidentiality statements. 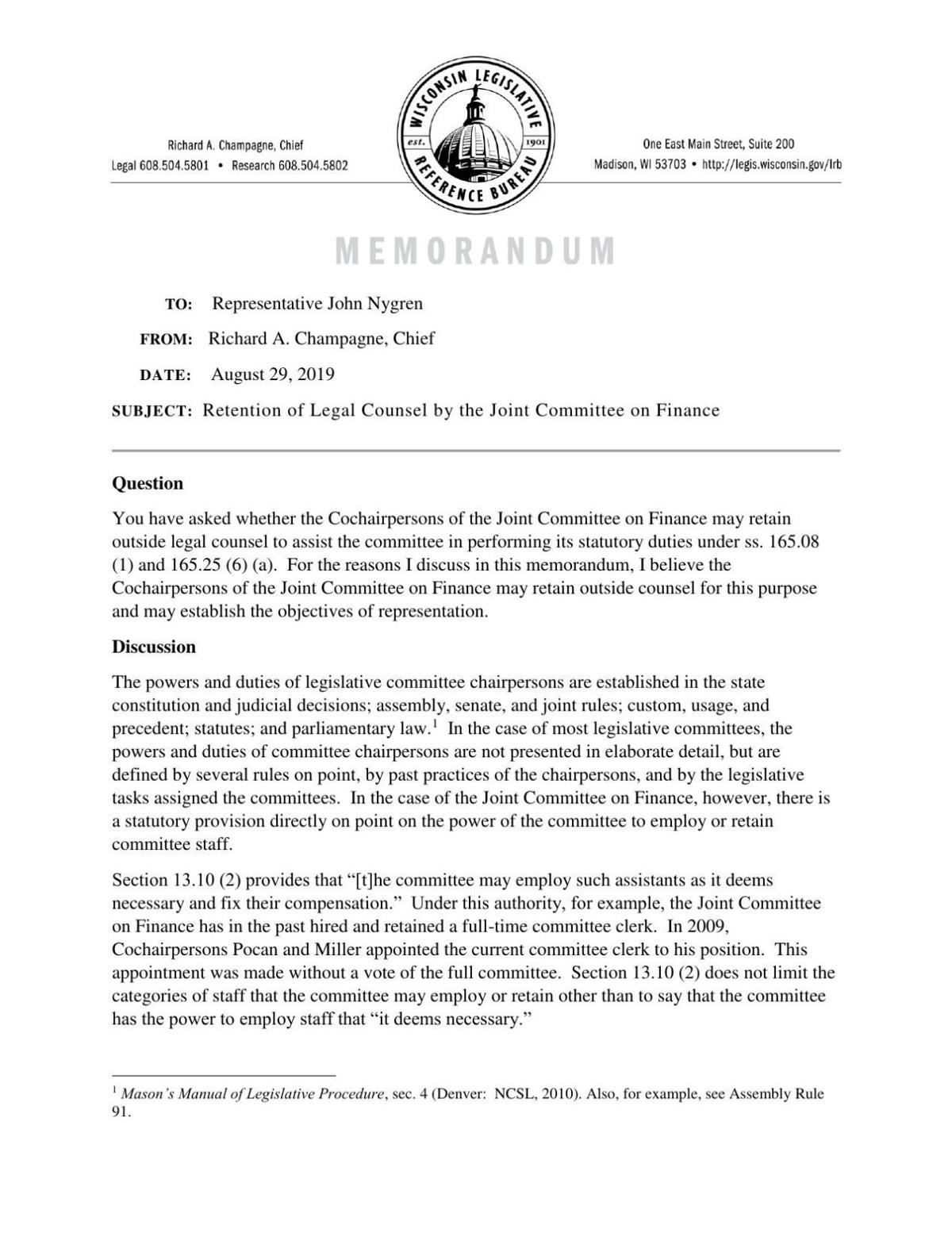 They added he should send settlement information to them for review, saying the panel "stands ready to review and approve any settlements that are in the state's interest."

Kaul in a statement said the Department of Justice is reviewing the document and will continue pushing for an agreement on the issue.

"Our interest remains in ensuring that Wisconsinites are represented as effectively as possible and that the enforcement of our environmental, consumer protection, and other laws is not impeded by partisan gamesmanship," he said.

The contract, dated Thursday and signed by Nygren, Darling and Phillips, shows Phillips will revise the committee on ethics and other issues, as well as sign the confidentiality agreement as a panel representative. That agreement, the contract said, will apply to all cases Kaul presents to the panel under the lame-duck laws.

Phillips and other attorneys that work with the committee would be paid $290 an hour, per the document,  a copy of which was shared with the Cap Times. The committee would also be responsible for covering travel costs, filing fees, photocopying expenses and more.

It appears the attorney fees would be covered separately or jointly by each legislative house's Organization Committee.

A Wisconsin Legislative Reference Bureau memo, dated Thursday and shared with the Cap Times, shows the co-chairs have the authority to "employ such assistants as it deems necessary and fix their compensation," including retaining counsel, though funding isn't provided to cover the position.

But earlier this year, the Assembly and Senate Organization committees separately adopted motions that allow the Legislature to hire counsel deemed necessary for services relating to the December extraordinary session and "any action or matter involving or affecting the state senate," respectively. That means the panels could cover the costs incurred by the Joint Finance Committee, the memo said.

The four Democratic lawmakers on the committee in a statement said they weren't aware of the signing of the confidentiality agreement by counsel. Slamming the news as "political game playing," they urged Republicans to repeal the extraordinary session laws and "let the Attorney General do his job."

Most rank-and-file GOP committee members' offices didn't return voicemails or messages left by the Cap Times seeking to learn when they were briefed on the plan and if they understood they were under a nondisclosure agreement, and other staffers directed the publication to the co-chairs' offices.

Earlier this week, Kaul signaled he faced a Friday deadline to take next steps in the ongoing suit. But in an email to lawmakers, a DOJ staffer wrote that a decision "is no longer needed by 11 a.m. tomorrow."

"We don’t yet know when or if there will be another time at which a decision may be needed regarding this matter, but it is possible that it will need to be made quickly," the message continued. "If that situation arises, we will let you know right away."

Nygren, R-Marinette, said in a statement that after members of the committee "met AG Kaul's request to sign a confidentiality agreement the urgent deadline resolved itself."

The December extraordinary session laws, supported by Republicans, required Democratic Attorney General Josh Kaul to seek permission from lawmakers before settling a case, among other things.