President Donald Trump is looking to invalidate swaths of absentee ballots cast in Wisconsin's two biggest and most liberal counties under a lawsuit filed Tuesday with the state Supreme Court seeking to reverse the results in a state he lost by less than 1 percentage point.

The expected legal action was filed in the days after Wisconsin completed its partial presidential recount and officials certified the state's presidential results, a move that kicked off a countdown to head to the courts and drew partisan ire — followed by a demand for a top election commissioner's resignation for affirming President-elect Joe Biden's victory.

Filed directly with the state's highest court, the lawsuit targets some 220,000 ballots, accounting for many of the same absentee votes the Trump campaign homed in on during the recount in Dane and Milwaukee counties over the last week-and-a-half.

The recount, requested and paid for by the Trump campaign and wrapped up over the weekend, delivered Biden an extra 74 votes across the two counties and paved the way for Tuesday's lawsuit, a last-ditch effort to claim Wisconsin and its 10 electoral votes. 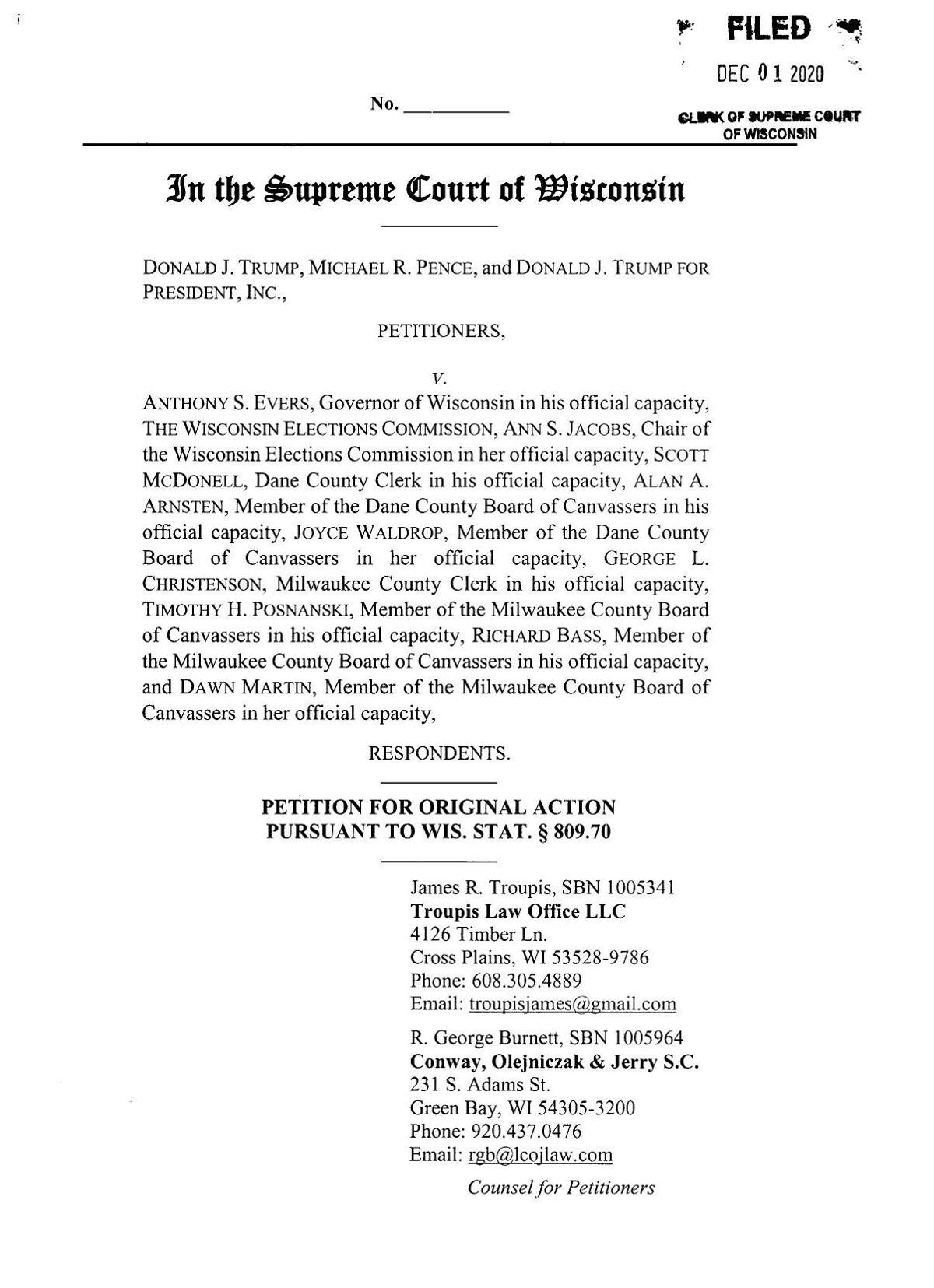 Among the votes targeted in Tuesday's filing are the 17,271 ballots that Madison voters returned to poll workers at the city's two Democracy in the Park events earlier this fall; around 28,000 ballots cast by voters who the Trump campaign argued improperly claimed they were "indefinitely confined" and therefore not subject to the voter ID requirement; and more.

But a Biden campaign spokesperson slammed the action as "completely baseless and not rooted in facts on the ground," adding: "These arguments to disenfranchise large groups of Wisconsin voters were resoundingly rejected by the Dane and Milwaukee County Boards of Canvassers during the recount process, frequently on a bipartisan basis."

Also challenged in Trump's lawsuit are the 170,000 ballots that were cast in Dane and Milwaukee counties during the two-week early, in-person voting period, which the Trump campaign argues should have been accompanied by a written request for a ballot.

Those ballots are placed in a certificate envelope that states, at the top, "official absentee ballot application/certification." Where voters sign and date also includes the words: "I further certify that I requested this ballot." The envelope, election officials have said, serves as a voter's written application for their absentee ballot. But the Trump campaign's suit argued it wasn't sufficient.

Further, Trump officials continued alleging absentee ballots were illegally altered by election workers who added missing information to the return envelope, a practice that has been in place for a dozen elections (including the 2016 presidential) and was based off of guidance from former Republican Attorney General Brad Schimel.

Wisconsin Elections Commission head Meagan Wolfe has said that poll workers are able to complete information on the address section that the voter's witness was supposed to fill out.

One of the most common examples, Wolfe previously told reporters, is when a locality has two ballots from a married couple that served as each other's witnesses. If one individual forgot to fill out their address information on their partner's envelope, the clerk would be able to complete it based on the information on the second envelope.

Many of the challenges the Trump campaign is pursuing in its lawsuit seek to address practices that were put in place statewide (including clerks' ability to add certain missing information to the absentee ballot envelope). But the campaign has opted to focus on the heavily Democratic Dane and Milwaukee counties, rather than casting a wider net.

The Trump campaign was able to file the lawsuit after the state completed its certification of the presidential result Monday. Elections Commission Chair Ann Jacobs, a Democrat, first signed off on the county canvass and recount results before Gov. Tony Evers approved a certificate of ascertainment certifying Biden as the winner.

Jacobs, who convened an Elections Commission meeting Tuesday morning shortly after the Trump campaign's suit was filed, was targeted by Republican members of the body for advancing the certification showing Biden's victory in the state.

Republican appointee Dean Knudson, who questioned whether the chair could unilaterally certify the recount and official statewide canvass herself, demanded Jacobs resign for doing so. He also moved to block further action from the panel during the meeting (which included certifying results for state legislative and congressional races) — a push that failed on a 3-3 vote with commissioners divided along party lines.

Republican commissioner Bob Spindell also accused the body's staff of aligning with Democrats to further the certification process, saying: "Obviously this is long-range Democratic planning solely to mess up the Trump campaign."

Jacobs, who has maintained her role in certifying the result is laid out in state law under language that was created by Republican lawmakers, emphasized the move wasn't illegal and countered Knudson was "misinformed about what took place and absolutely incorrect."

Fellow Democratic commissioner Mark Thomsen, who served as chair in 2016, noted he certified the presidential results on his own at that time -- the same way Jacobs did four years later. Leadership of the panel alternates every two years between Democrats and Republicans.

Thomsen said after he certified the 2016 results, no one called for his resignation.

"The only thing I see that's different is Ann Jacobs is a woman and I'm a white guy," he added.

Wisconsin law states the Elections Commission "chairperson ... shall publicly canvass the returns and make his or her certifications and determinations on or before ... the first day of December following a general election." Once received, the law further directs the chair to "proceed to examine and make a statement of the total number of votes cast at any election for the offices involved in the election for president and vice president."

The commission and surrounding law were designed by Republicans to replace the old Government Accountability Board, which was abolished in 2015. That effort (and subsequent creation of the Elections Commission) was led by Knudson, then a state lawmaker, who was later appointed to the panel in 2017.

Officials in Dane and Milwaukee counties are well into day four of their recounts after kick-starting the process Friday. They have until Dec. 1 at noon to finish re-tallying the votes.

The Wisconsin presidential recount has begun; here's how the process works

The Trump campaign Wednesday officially filed a petition for a partial recount of Wisconsin, which Biden won by some 20,600 votes.

David McGrath: Growing up racist in the shadow of MLK