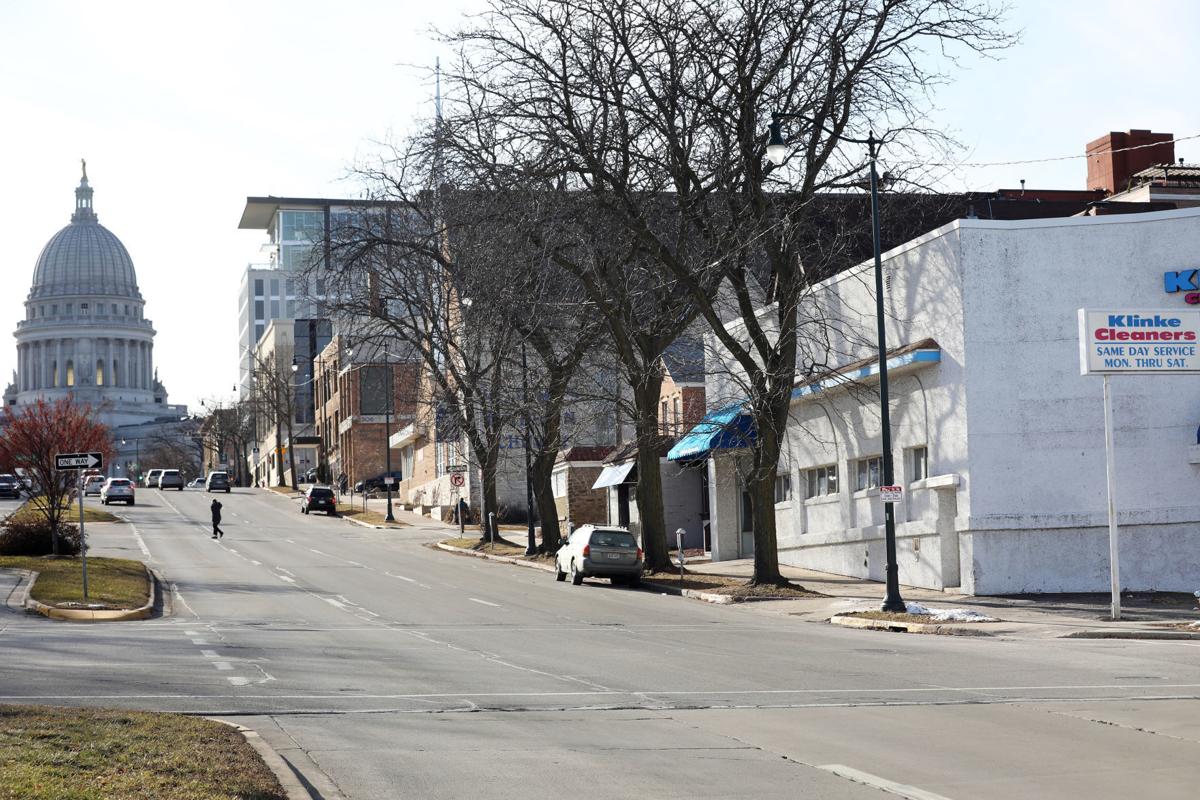 LZ Ventures' proposed 10-story housing project would take the place of a Klinke Cleaners, in foreground, and several other nearby buildings. 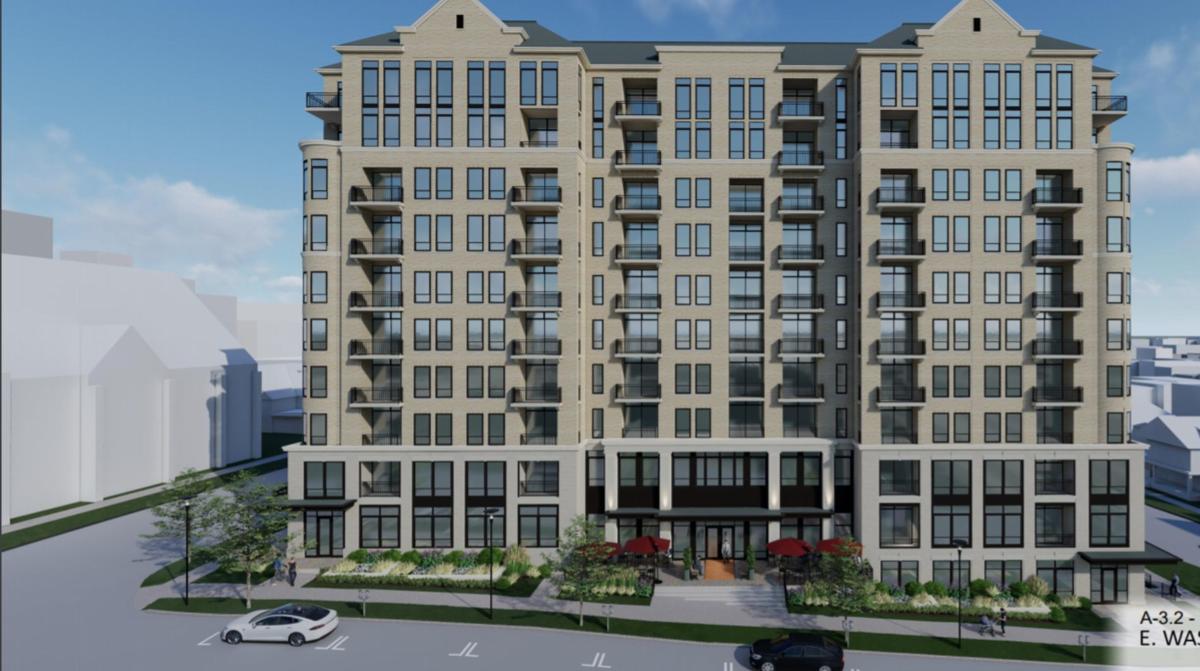 An architectural rendering of The Continental, proposed for 414 East Washington Ave.

This August, Sofia Brichford and more than 30 other residents of a building at 404 E. Washington Ave. will have to find a new place to live. The building — an old apartment structure — is expected to be demolished when a new development project from LZ Ventures is built on the site.

“I wouldn’t have moved here if I thought they were going to knock down the building,” said Brichford, who has lived there for three years. “Being forced to move because someone wants to buy your building is expensive and difficult, especially during the pandemic. You can’t look at apartments because the pandemic is going on.”

The LZ Ventures proposal, which is being reviewed for a possible final approval at Wednesday’s Urban Design Commission virtual meeting, calls for the demolition of five residential structures and a commercial building at 402-414 E. Washington Ave., 8-12 N. Franklin St., and 9 N. Hancock St.

LZ Ventures would then construct an eight to 10 story multi-family residential building with 152 units, two levels of underground parking and 3,300 square feet of commercial space.

But at least 10 residents from the neighborhood do not want the project to be approved by the UDC or the city. And some, like Brichford, who participated in meetings about the proposal, think the city is allowing it to move forward too quickly at a time when people don’t have the options they normally would for moving out. LZ Ventures anticipates that people will need to leave at the beginning of August in order to begin the demolition.

“I think it is irresponsible to assume everything is gonna be fine in August,” Brichford said. “They want us all to move out on the same day in the beginning of August. But having movers come in is an infection risk and going to view apartments to move into is an infection risk.

Calls to LZ Ventures about the project were not returned as of press time.

UDC has the ability to grant initial or even final approval to the project at Wednesday’s meeting. The committee received informational presentations from LZ Ventures both on Jan. 27 and on March 11. According to UDC reports from the meetings, city staff said that the height of the building is consistent with the Downtown Plan.

Alder Patrick Heck, who represents District 2, where the project is located, said that he has not taken a position yet in support of or against the proposal.

The project will go before the Plan Commission on June 8 in order to receive approval for the two bonus stories. Buildings need Plan approval to go higher than eight stories.

The design of the building would dwarf its surrounding structures. The proposal is requesting up to 10 stories when everything next to it is less than three stories tall.

“Basically, I hate it,” Brichford said of the proposed design. “I don’t like anything about it. The building doesn’t fit with the buildings around it. It’s ugly and it doesn’t look good.”

In addition to concerns about the building’s structure and design, there have been issues within the neighborhood itself about how to provide feedback from the community to UDC.

In general, when a project, especially a large one, is submitted for approval, the neighborhood forms a steering committee, which organizes neighborhood meetings between residents and the development team. Then the group will write a letter of support or opposition to city entities like the Urban Design or Plan commissions, which informs officials as to whether or not there is community support for a project.

In Martino’s letter to UDC he states that “The neighbors did not have enough information to understand the exact requirements of why the additional 2 bonus stories would meet or not meet the exceptional design requirement set forth in the language of the redevelopment plan for the neighborhood. The overall consensus is that what is proposed is very large comparable to existing structures.

“However, it was also pointed out by one of the proponents of the project that someone must be first to start the redevelopment process,” Martino wrote. And he believes the building’s height is in keeping with the Downtown Madison plan.

Other members of the steering committee, including Madison business owner Bob Klebba, said that the letter of support sent by Martino was not reviewed by anyone in the neighborhood and that residents remain concerned about several aspects of the proposal. As a result, a group of steering committee members who oppose the proposal have also submitted a letter to the UDC.

Martino had not responded to multiple calls from the Cap Times at the time of this story.

Gary Tipler, who has worked in promoting historic preservation development for over 45 years, said that the building’s height appears abrupt next to the adjacent buildings in the James Madison Park neighborhood.

“Furthermore, there is nothing in the design that reflects the mostly 19th and early 20th century historic character of the downtown James Madison Park neighborhood,” Tipler said.

Design issues aside, people like Brichford still have to think about where they are going to live if and when the proposal breaks ground.

“I guess I have to start looking for a place but I don’t even know where to start,” Brichford said. “April would have been a better time to be looking because landlords would know who is moving out of places.”

At least one other resident thinks the city is allowing developers to move too quickly during the COVID-19 pandemic. One resident is quoted in the letter as saying:

“They need to slow this proposal way down….They are totally taking advantage of this pandemic. The developers want to sneak in under the radar while having inadequate ‘Virtual Meetings.’”

Another resident, Tracy Dietzel, said, “When these major projects are approved during a time such as this pandemic, it really feels like the developer and powers that be are taking advantage of this time.”

LZ Ventures' proposed 10-story housing project would take the place of a Klinke Cleaners, in foreground, and several other nearby buildings.

An architectural rendering of The Continental, proposed for 414 East Washington Ave.