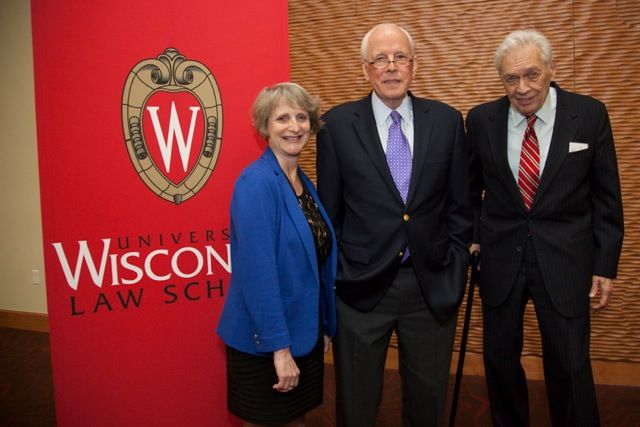 University of Wisconsin-Law School Dean Margaret Raymond, former White House counsel John Dean and former Rep. Bob Kastenmeier are pictured in October 2013, when Dean spoke about Watergate, delivering a lecture titled "Crossing the Line: Watergate, the Criminal Law and Ethics." It was the first time Dean and Kastenmeier had been together since the Watergate hearings. The annual lectures at the UW-Law School are named in Kastenmeier's honor. It was the last time Kastenmeier was in Madison, a friend from Washington D.C. said Friday. 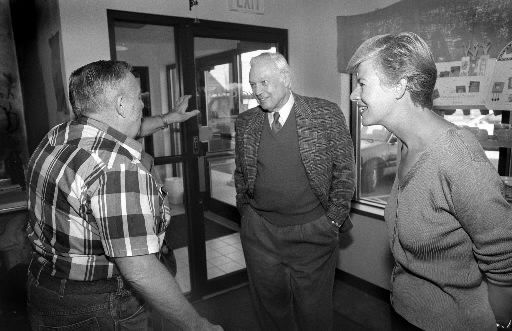 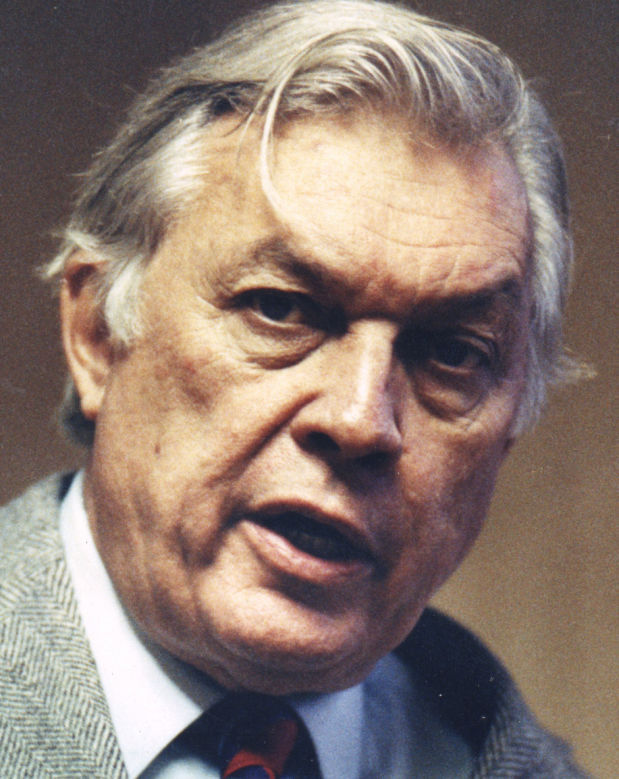 Robert W. Kastenmeier, a Democrat who represented Madison and Dane County in the U.S. House of Representatives from 1959 to 1991, died at his home in Arlington, Virginia, Friday.

Kastenmeier's wife, Dorothy, informed former U.S. Rep. David Obey, another former Democratic member of Congress from Wisconsin, of his passing. He was 91.

Born in Beaver Dam, Wisconsin, in 1924, Kastenmeier attended the University of Wisconsin, leaving school to serve in the Army from 1943 to 1946. After being discharged as a first lieutenant in the Philippines, he remained there until 1948, serving as branch office director for the claims service of the U.S. War Department. He returned to the UW and received his law degree in 1952.

Reached Friday, Obey referred to Kastenmeier as a dear friend with whom he spoke regularly in recent years.

"I suppose the areas that he would be most proud of would be the work he did on civil liberties and the leadership role he played in opposing the Vietnam War," Obey said. "He held the first teach-ins on the war to educate people about that misbegotten operation."

Obey also pointed to Kastenmeier's work on intellectual property issues and his work to secure funding for research at UW-Madison.

"I always felt that the city of Madison never appreciated fully how important Bob was to the economic conditions of Dane County," Obey said. "As the years went by, Madison became more and more a high tech center and had a lot of industries, a lot of businesses that were very dependent upon getting a square deal on intellectual property issues and because of Bob’s heavy visibility in the area of civil rights and anti-war actions, I think people often overlooked how crucial he was in opening up avenues for the emerging economic leadership in that community.

"I always found it ironic that just as those issues bubbled to the top of the Congressional agenda and at a time when Madison really needed that kind of help, that Bob would lose an election."

Obey was referring to Kastenmeier's final election in 1990, when he lost his seat to Republican Scott Klug, who went on to represent the district for eight years.

Kastenmeier was credited for leading the passage of the Copyright Law of 1976 by Congress, the first revision since 1909. He also oversaw passage of legal protection for semiconductor chips from piracy of their design in 1984.

Kastenmeier staked out positions on individual rights early in his Congressional career. He supported the Civil Rights Acts of 1964 and 1968 and the Voting Rights Act of 1965. He also led the fight to terminate authority to establish concentration camps in the U.S. like those used to detain American citizens of Japanese descent during World War II.

During impeachment proceedings for President Richard Nixon in 1974, Kastenmeier directed the drafting of rules that governed the Judiciary Committee hearings.

The following is from a March 11 column by Dave Zweifel about Kastenmeier in which he urged Wisconsin progressives, "Don't give up the ship."

He may be 91 now, but the voice is just as strong and the concern about the direction of America just as keen as it was when he represented Wisconsin's 2nd District in Congress for 32 years.

Robert W. Kastenmeier and his wife, Dorothy, are living in a "little condo" in Arlington, Va., just a couple of miles from the home the couple shared during his congressional career, which spanned from 1959 to 1991 and had him in the middle of some of the country's biggest crises, from Vietnam to Richard Nixon's Watergate.

Bob, as he prefers to be called, has one lament. He's not able to get out and about as much as he'd like because of a "weak heart." Walking any distance is no longer in the cards.

It's been nearly 25 years since Bob was upset by a Republican newcomer in November of 1990, a former TV anchor named Scott Klug. The outcome was a stunner in the Madison-anchored 2nd District, which had been getting more blue every election. Klug passed himself off as a moderate and while admitting Kastenmeier had served admirably through all those years, Klug argued it was time for a fresh face. It worked, and while polls showed Kastenmeier with a comfortable lead just days before the election, a series of last-minute but effective TV ads turned the tide.

Oh sure, after all these years Bob still misses being in the thick of things, but he's thankful that he doesn't have to run in a time like now when everything hinges on how much money you can raise.

"To be honest, it seems like the distant past now," he says of his long congressional career. "But it's not only the fundraising demands, but the heartaches and problems that seem to get so exaggerated in today's political atmosphere," pointing to U.S. Sen. Tammy Baldwin's Tomah VA Hospital controversy as a prime example.

During his years in Congress, Kastenmeier was frequently at the forefront of major issues. He was an early critic of President Lyndon Johnson's escalation of the war in Vietnam and even brought his House subcommittee to Madison to hold public hearings on the impact the war was having on his constituents in the 2nd District.

What bothers him today is that the nation doesn't seem to have learned a thing from Vietnam, as evidenced by our reckless forays into places like Iraq and elsewhere.

He does salute President Barack Obama for his reticence over getting the U.S. even more deeply involved by standing up to the relentless hardliners who continue to push him, including Israeli Prime Minister Benjamin Netanyahu and his supporters in the U.S. Congress.

"There are far too many trouble spots in the world," the World War II veteran said. "And we must always remember what history has taught us, that it's always very easy to get in, but terribly hard to get out."

Bob still pays close attention to what's happening in Wisconsin, too. He reads The Capital Times and Wisconsin State Journal religiously. He's a huge Badger football and basketball fan, a lifelong Packer backer, and he keeps cheering for the Brew crew.

But he's not a big fan of Scott Walker, to put it mildly, and he's particularly concerned about the governor's budgetary attack on the University of Wisconsin.

Yes, Walker is doing well as a possible contender for the GOP's presidential nomination, but "I tell my friends that it's not a good sign when 47 to 48 percent of the people in your home state not only don't agree with you, they hate you — bitterly. This is a big negative that people out of the state don't realize."

Still, the former congressman added, Walker is likely to be one of the two or three who will be "up there" when it comes down to the final selection. He still gives the edge, though, to Jeb Bush.

Meanwhile, he's ecstatic over the possibility that former Sen. Russ Feingold is planning to make a comeback by taking on the man who beat him in 2010, Ron Johnson.

"Russ will have a wonderful chance to win," Kastenmeier predicted.

What I remember best about this Wisconsin political legend is that despite all the heated battles and contentious debates, he was always a gentleman who believed no matter how bitter the politics, the bottom line was to play fair.

He closed the conversation with these words:

"Don't give up the ship," he said. "There are better days ahead."

Get news delivered to your inbox!

In response to the assault on the U.S. Capitol Wednesday, a car caravan made its way from Madison’s Capitol Square to U.S. Sen. Ron Johnson’s Madison office Saturday afternoon to call for his resignation.

In response to the assault on the U.S. Capitol Wednesday, a car caravan made its way from Madison’s Capitol Square to U.S. Sen. Ron Johnson’s Madison office Saturday afternoon to call for his resignation.

President Trump had appealed two of his Wisconsin losses to the U.S. Supreme Court.

The CDC recommends the use of face masks in public settings, especially among individuals who are not in the same household.

Tony Evers calls for unemployment overhaul, redistricting transparency in State of the State

Evers also wants a $200 million investment in broadband in the next budget.

Report: Taxes in Wisconsin as a share of income continues to decline to record low

That could change next year due to the ongoing COVID-19 pandemic, which has had a devastating impact on businesses and employees across Wisconsin.

The Dane County Board also put $5 million toward extending a program that has helped food insecure families by stocking pantries with produce and meat from local farmers.

University of Wisconsin-Law School Dean Margaret Raymond, former White House counsel John Dean and former Rep. Bob Kastenmeier are pictured in October 2013, when Dean spoke about Watergate, delivering a lecture titled "Crossing the Line: Watergate, the Criminal Law and Ethics." It was the first time Dean and Kastenmeier had been together since the Watergate hearings. The annual lectures at the UW-Law School are named in Kastenmeier's honor. It was the last time Kastenmeier was in Madison, a friend from Washington D.C. said Friday.