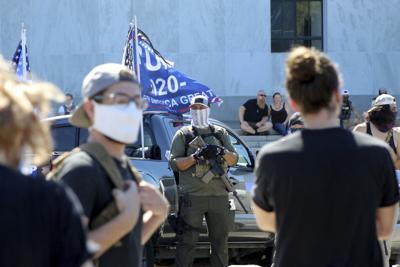 It’s been two years since Walt Madsen started a militia in the north woods of Price County. Since then, he’s watched the ranks of fellow “patriots” swell.

Across the nation and in Wisconsin, the militia movement is flourishing, fueled by outrage over stay-at-home orders, mask mandates and public unrest. In increasing numbers, armed militia members and vigilantes have inserted themselves into highly charged confrontations between protesters and police, with sometimes violent consequences.

In California, a man associated with the far-right Boogaloo movement has been charged with killing two officers. Other adherents, sometimes wearing trademark Hawaiian shirts, have been suspected of infiltrating Black Lives Matter protests to incite violence.

The violence reached new heights when hundreds of armed men showed up in Kenosha after buildings were ransacked and burned in response to the Aug. 23 police shooting of Jacob Blake. One of those men, 17-year-old Kyle Rittenhouse, shot three protesters, killing two and seriously wounding the third.

Madsen, who didn’t go to Kenosha, said his group eschews the racism and anti-government ideologies espoused by some of the extreme militia types. His group and others like it, he said, merely want to keep the peace.

“We will go to protests and make sure things don’t get out of hand on both sides,” he said.

But he’s quick to say Rittenhouse acted in self-defense and calls those he shot criminals. He’s a staunch supporter of President Donald Trump, who has publicly aired similar views and has signaled support for militia members aligned with his right-wing agenda.

Like the political environment in general, tensions between the left and the right are intensifying on the street as the presidential election nears. The bitterness is starting to spill over into violence between right-wing militias members openly carrying assault rifles and left-wing activists that anecdotal evidence suggests are increasingly likely to be packing heat — and increasingly likely to use it.

On Aug. 29, Black Lives Matter protester Michael Reinoehl shot a counter-protester in the chest, killing him on the spot. Reinoehl, a self-described supporter of antifa — a militant, loosely organized, left-wing, antifascist community — was later killed by police.

Many observers fear that as Election Day approaches, the threat of violence will intensify.

“We may not even know who won the presidential election until early next year,” said Daryl Johnson, a former analyst and terrorism expert with the U.S. Department of Homeland Security. “It will increase anxiety, prolong it. People will become even more paranoid and upset.”

The recent proliferation of militia groups comes after decades of fits and starts.

Although the patriot movement casts itself as the reincarnation of the Revolutionary War militias that helped the nation win independence, Johnson pegs the modern militia movement to the aftermath of the 1992 government standoff in Ruby Ridge, Idaho, and the 1993 siege of the Branch Davidian compound in Waco, Texas.

After those debacles, during which government aggression led to the loss of innocent lives, John Trockman of Montana introduced the concept of private militias, spurring the formation of hundreds of such groups across the U.S., most notably the Michigan Militia, which boasted tens of thousands of adherents.

A federal crackdown after the April 19, 1995, Oklahoma City bombing – two years to the day after the Waco siege – thinned the militia ranks, said Johnson, and the movement laid largely dormant until 2007, when the candidacy of Barack Obama, the first African American president, breathed new life into the movement. By 2010, more than 300 militias had materialized across the country.

While some estimates put the number of active militias in the U.S. at about 300, the online forum mymilitia.com, which bills itself as “An American Patriot Network,” lists about 500, nine of them in Wisconsin.

In 2006, a Brookings Institute analysis put the nationwide number at 52.

While they vary in size and focus, most militias hold in common a right-wing ideology on issues like gun rights, law-and-order, mistrust of government and immigration, issues highlighted by Trump in his reelection bid.

One of the forums for recruiting is mymilitia.com, where one man from the Waukesha area recently posted a call for volunteers for a militia he intends to start.

In a written interview conducted over the website’s message service, the 23-year-old wrote that he has no military training, no job, and was studying field manuals and training videos.

“I actually got drawn to it for the idea that I can still service my country even if a medical condition disqualified me from any form of military service,” he said.

He credited the militia members who showed up in Kenosha for “defending what little shops remained after rioting broke out,” and blamed “democratic party politicians” for tying the hands of police.

“Militia groups matter cause they are the backbone of what makes America a great nation, cause that means, whenever there's trouble and police can't help you cause the government has their thumbs up their asses you can always count on armed citizens to help whenever possible,” he wrote.

Siding with police, against government

Events leading up to the Kenosha shootings provide a stark example of how easily militias can be mobilized.

After the destruction in Kenosha, former Kenosha City Council member Kevin Mathewson issued a call for armed citizens to protect the city on his Kenosha Guard Facebook page

The post drew thousands of responses and brought hundreds of armed men to town.

Mathewson said he was surprised by the numbers.

“I knew that many like minded people would take up arms to protect their families, homes and businesses,” he said in an email. “But I never would have guessed the large response.”

Despite the bloodshed, he has no regrets.

“When the government cannot provide for your safety, you have to protect yourself,” he said.

Video from that night indicates that at least some law enforcement officers were cooperating with the armed men. One man with an assault rifle was seen on video saying police had tried to enlist militia members’ help bottling up groups of protesters. Another showed officers in a sheriff’s department vehicle passing bottled water to Rittenhouse and thanking the armed men for their work.

After the shootings, police in emergency vehicles ignored Rittenhouse when he tried to surrender.

“That speaks to the bias that the police have, because in a lot of cases they have these relationships of trust with these vigilantes,” Johnson said.

But not all militia members have that kind of relationship with police. Members of one relatively new far-right movement, the Boogaloo Bois, harbors an “especially intense animus reserved for members of law enforcement,” according to the Southern Poverty Law Center, which tracks hate groups. Witnesses said some of the Kenosha vigilantes were Boogaloo adherents.

According to the Southern Poverty Law Center, the far-right ideology behind the Boogaloo movement — it derives its name jokingly from a 1982 breakdance movie — developed over social media platforms during the past decade. But its core aim is to provoke an armed insurrection against the government.

“What they all agree on generally is the need to establish the kickoff to the second civil war in the United States,” said Seth Jones, a political scientist with the Center for Strategic and International Studies who specializes in terrorism.

Military veterans in the ranks

Madsen ridicules the Boogaloo movement, calls them “booger boys.” He said he won’t tolerate anyone with an anti-government agenda. When some of his own men recently showed such inclinations, he said, “I pushed them out.”

Elected as a Price County supervisor last spring, Madsen served in Iraq during the 2007 surge, and he said he saw plenty of action. Disabled with PTSD and knee injuries, he considers his work with the U.S. Northern Militia an extension of his service to the nation.

“We already suffer from post-traumatic stress disorder and all kinds of things, and we’re starting to see the same things happening in our own county, and we’re like, ‘We need this to stop,’” he said.

He said the militia movement is driven by military veterans like him, people who fought in Iraq and won’t stand for the kind of sectarian violence here that they saw in that war-torn country.

The New York Times recently reported that, based on estimates by experts, veterans and active-duty military members may make up as much as a quarter of militia members, bringing tactical skills, field experience and weaponry to the table.

One group alone, The Oath Keepers, a large but loosely organized anti-government militia, claims tens of thousands of military and law enforcement members.

As worrisome as the presence of openly carried shotguns and assault rifles at protests is the addition of concealed weapons carried by protesters. One of the Kenosha victims, a street medic who survived, was holding a handgun when he was shot.

Jones, the CSIS analyst, fears that in the event of a Trump victory, far-left movements like antifa could “take matters in their own hands.”

“I’ve interviewed some of them,” Jones said of left-wing activists. “They have said, straight-up, they believe force is legitimate under this president and this system. They believe it is a fascist system, that he is moving in the direction of usurping power. It’s moving in a dictatorship direction, a fascist direction.”

One sign of a growing militancy on the left is the emergence of an all-Black militia.

The Atlanta-based Not Fucking Around Coalition, or NFAC, is composed of “ex-military shooters,” according to the group’s leader, known as Grand Master Jay. The militia has made a handful of appearances at protests since May. During an event in Louisville, Kentucky, in July, a member of the group wounded three fellow militia members when she accidentally fired her weapon.

“We have politically motivated people on the far right and the far left moving in to patrol communities because they do not believe law enforcement can do it by themselves,” Jones said. “That is a very toxic environment to be moving into.”

Madsen is worried about the election. He fears that with a Trump win, the civil unrest that has engulfed larger Wisconsin cities will spread across the state like wildfire, endangering people and property in his north woods enclave.

It’s the kind of thing he and his men have been training for, using county-owned land and a county-owned shooting range to practice military tactics in preparation of whatever is to come.

“All my guys, we’ve been talking about this, and all we can do is we’re going to stay around our home area,” Madsen said. “Because if it does get that bad, if there’s unrest, we can’t leave our families up here to defend themselves. We have to defend our families.”

What if it doesn’t get that bad?

Cap Times reporter Steve Elbow explains what we know about the growing militia movement — and what it could mean for the November election. 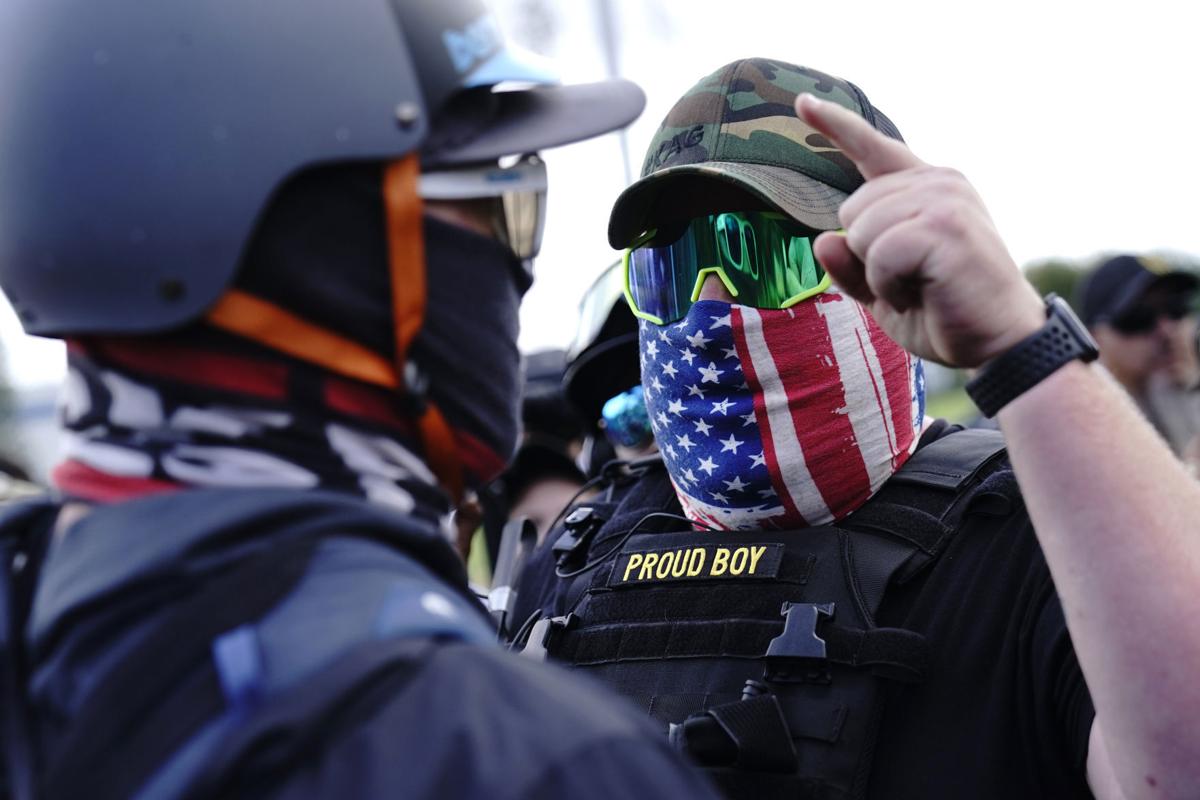 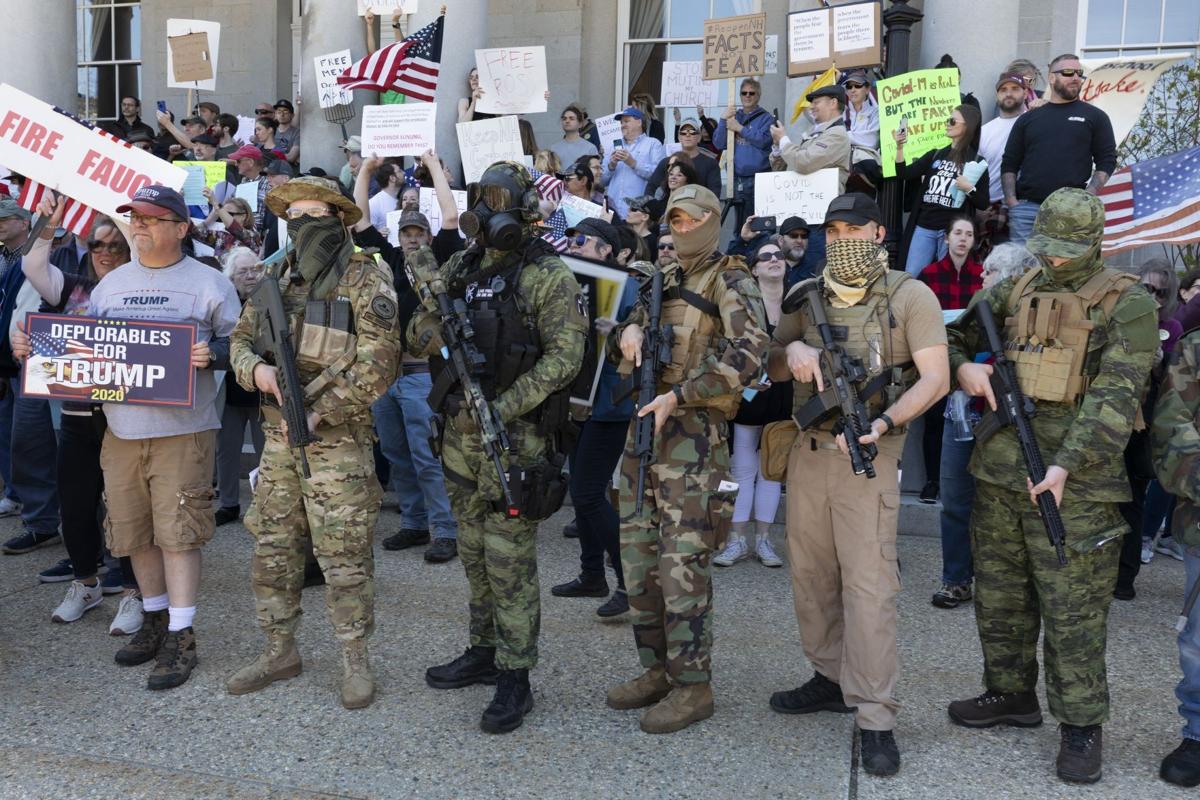 Stay-at-home orders during the COVID-19 pandemic and protests following the killing of George Floyd in Minneapolis have supercharged radical elements that espouse anti-government and sometimes racist agendas. 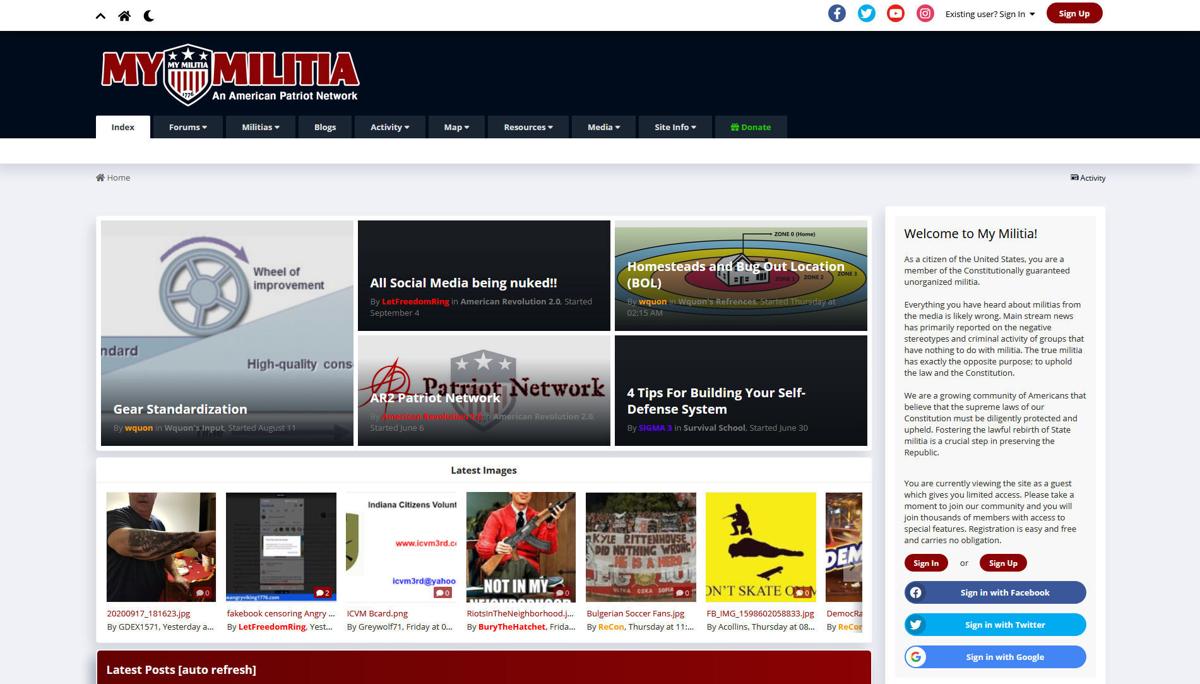 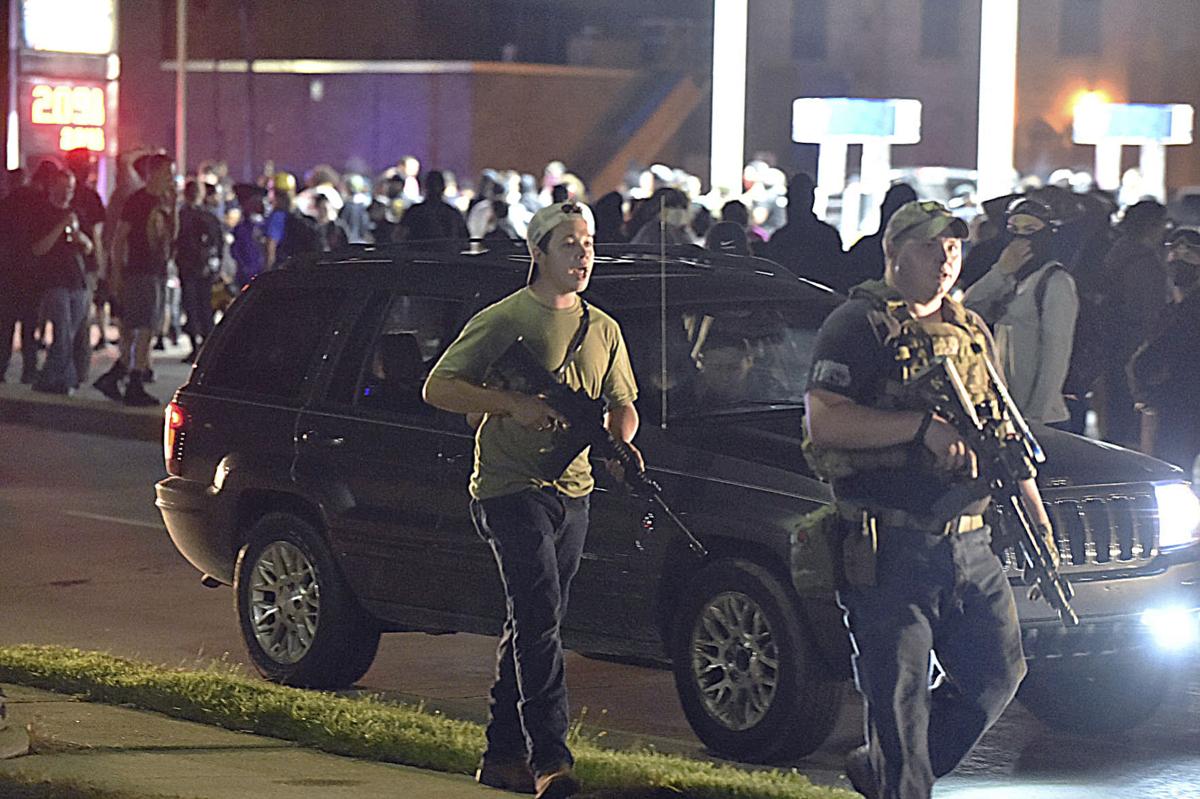 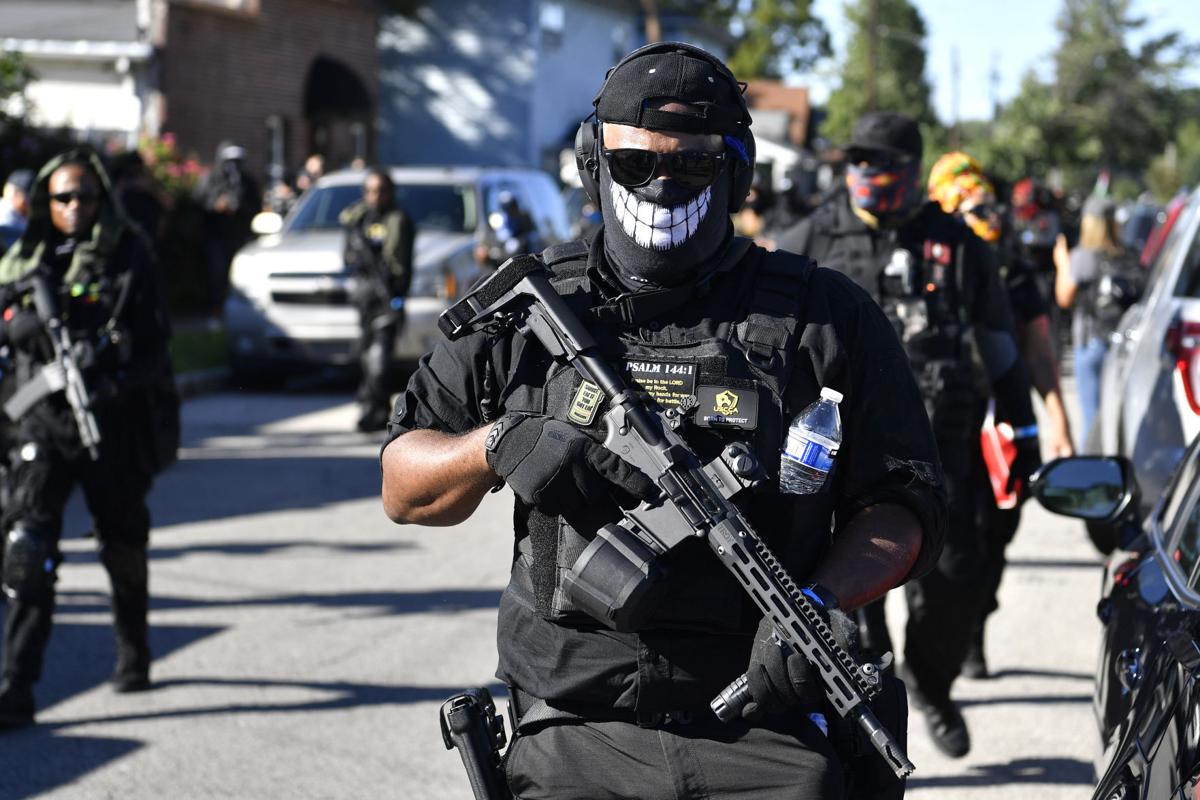 An all-Black militia, the Atlanta-based Not Fucking Around Coalition, has emerged and made a number of appearances at protests since May, including this one in Louisville on Sept. 5.