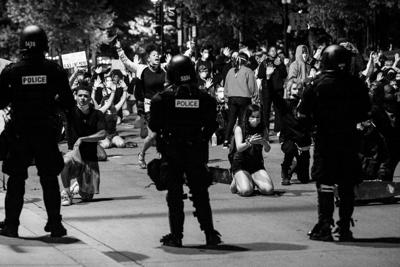 The Madison Police Department’s use-of-force procedures largely align with changes Wisconsin Gov. Tony Evers is calling for law enforcement agencies to implement as part of a Democratic bill that would overhaul those policies.

But a review of MPD’s plan shows it lacks one key component contained in the legislation: if officers do use physical force, it should be the "least amount of force necessary to safely address the threat."

While a leading author of the bill touted the importance of such language in ensuring police respond in “a way that’s commensurate with the threat,” a top MPD official argued it wasn’t “a workable standard” because it’s “unknowable.”

Evers last week called on the Republican-led Legislature to pass the bill following a series of peaceful demonstrations in response to George Floyd’s death in Minneapolis police custody, some of which gave way to clashes between people and police in downtown Madison and elsewhere across the state.

Under the legislation, law enforcement agencies would need to ensure their use-of-force policies stress the importance of preserving the life of all individuals; that deadly force should only be used “as the last resort;” that tactics should be deployed to minimize the likelihood force would be necessary; that any force used “should be the least amount” necessary; and that fellow officers “must take reasonable action” to prevent or cease an “unreasonable use of force” by colleagues.

MPD’s standard operating procedure pertaining to the use of deadly force seems to contain four of the five points. But rather than stipulating that “the least amount of force necessary” should be used in situations that call for it, it instead employs a standard where officers are able to use force that’s “objectively reasonable,” per the language.

Acting Police Chief Vic Wahl in an interview last week noted that while he hadn’t seen the legislation, he had concerns about adopting the language under that part of the bill.

“I think the problem with 'least' — and I haven't seen the legislation so I don't know exactly the wording that's in there — but ‘least’ or ‘minimum’ is as a matter of sort of legal analysis of any incident,” he said. “It's just not a workable standard because you could never know what the least amount is. It's just an unknowable standard, so I think that's my concern.”

But leading bill author and state Rep. Chris Taylor, D-Madison, said having such language was crucial to ensuring a police response wasn’t disproportionate to the threat posed.

“You cannot look at George Floyd and say the threat necessitated the force used,” she said. “And so it’s a really important standard and Madison doesn’t have it.”

Floyd was killed May 25 after a store clerk called police when he allegedly tried to pass a counterfeit $20 bill. During Floyd’s arrest, former officer Derek Chauvin was shown on video kneeling on 46-year-old Floyd’s neck for nearly nine minutes even as Floyd said that he couldn’t breathe.

The standard known also as proportionality (meaning any force used should be in proportion to the threat posed) was among the 177 recommendations included in the Madison Police Department Policy and Procedure Review Ad Hoc Committee’s October 2019 final report. Wahl at the time pushed back on the standard because he argued, per the report, that it may “be misinterpreted as requiring officers to use the same type and level of force as the subject.”

The recommendations also advised MPD to go beyond the standard it already employs — “objective reasonableness,” or that officers are only allowed to use force that is “objectively reasonable” to further “a legitimate, lawful objective,” per the policy. The language, the report notes, dates back to a 1989 case where the U.S. Supreme Court specified excessive force claims should be judged in terms of the 4th Amendment ban against “unreasonable searches and seizures.”

Keith Findley, the committee’s co-chair, said the panel’s members didn’t think the case law standard went far enough “to provide meaningful guidance to law enforcement officers to ensure that force was used only when it really has to be used.”

But he added the committee believed the court had implemented it as “the minimum requirement” to satisfy the 4th Amendment.

“In other words, the court adopted that as a constitutional floor,” he continued. “But it was not meant to be the guiding principle that police themselves and communities themselves should adopt to provide guidance to law enforcement officers.”

An issue of culture and hiring

Still, Wahl also questioned the importance of a plan’s language compared to department “culture and hiring and values,” as he highlighted the many other things “that have been done in the area of use-of-force policy and training.”

“I don't know about Minneapolis, but I certainly assume that what we saw on that video was not part of their policy,” he said. “I would assume that they have a policy that tells officers they should intervene if they see someone doing that. And so the fact that it didn't happen to me is more an issue of culture and hiring and other issues rather than some simple policy language.”

“I think in this debate, we often get too hung up on a word here, a word there, a clause in the policy, thinking that's going to fix things, and I think it's more important to hire the right people and culture,” he added.

While Findley agreed hiring practices are “critically important,” he said policy language also helps “shape that culture in very significant ways and makes that culture explicit” so it’s understood both inside and outside a law enforcement office.

Though he conceded that terms like “minimum force necessary” are difficult to define and recognize, he noted that “that’s the problem with all of these standards,” including the one set in the 1989 case.

“What it means in any given case is going to be tough to figure out but that’s absolutely unavoidable in all of these circumstances, so we better just do the best we can and set that standard at a point that really does express our values,” he said. “I think requiring police officers to use the minimum amount of force against our fellow community members is what we as community members want …”

In addition to its use-of-force policy, MPD also has de-escalating procedures in place “that seek to reduce the likelihood of the need to use force during an incident and increase the likelihood of a positive resolution,” according to the language.

MPD’s self-reported data shows use-of-force instances aren’t common. Over the first three months of the year, MPD’s data documented by officers shows of the 32,218 citizen contacts, recordable force was used in just 80 of those encounters, or 0.25%. Each of those instances were also reviewed for compliance with MPD’s standard operating procedures.

In addition to the five principles all law enforcement offices’ use-of-force policies would be required to include, Taylor’s legislation would direct the Law Enforcement Standards Board to create its own model policy that organizations could adopt.

The bill would also direct entities to stipulate in their policies when and how use-of-force instances have to be reported, as well as compelling those who engage in or observe those instances to report them.

The legislation aims to protect officers who report by prohibiting them from being discharged or disciplined, or face other retribution after they inform a commanding officer or manager about an incident.

MPD’s code of conduct stipulates that an “officer present and observing another officer using excessive force …. has an affirmative obligation to intercede and report.” The language is also in its use-of-force policy.

Wahl also said MPD has discussed “doing some additional training in light of what we’ve seen recently,” but he stressed the reporting requirement has “been in our policy and code of conduct for a while.”

The legislation itself came about following the death of 19-year-old Tony Robinson in 2015 after he was shot by MPD officer Matt Kenny, Taylor said. After that, she said she became curious about the standards police had for using force, which led her to the “objective reasonableness” criteria that she described as “extremely vague” and indecipherable even for her as an attorney.

After talking with experts across the country, analyzing best practices of police departments and reading through recommendations including the Police Enforcement Executive Forum’s Guiding Principles on Use of Force and former President Barack Obama’s Task Force on 21st Century Policing, she first introduced the bill in 2017.

But the bill, supported then by 12 Democrats, never got a hearing and languished in the Legislature for the remainder of the session.

She didn’t introduce it again this year until March, when the legislative session was all but wrapped up, because she said she was holding out hope she could get a Republican lawmaker to sign on as a cosponsor.

That ultimately didn’t happen. Backed by 12 Democrats, including leading Sen. LaTonya Johnson, the bill still doesn’t have a single GOP lawmaker sponsoring it, though Republican support is needed to get it through the Legislature.

Despite the lack of a path forward for the measure, Taylor stressed that people across the state could work independently to create change in their local law enforcement agencies

“We can change the system and that’s what I keep telling people,” she said. “If the Legislature won’t do it, your community can.”

Abby Becker contributed to this report.

What do protests mean for School Resource Officers in Madison?

Four School Board members have expressed interest in ending the contract with the Madison Police Department for school resource officers early, though it's unclear what the timeline would be or how it will work in practice.

The push comes on the fourth straight day of protests against police violence against black people, in the wake of George Floyd's death, in downtown Madison.

Gov. Tony Evers on Tuesday pushed for state and local-level action in the aftermath of George Floyd's death in Minneapolis police custody.

Though Madison police rarely use force, racial disparities exist among those involved

Recent protests over police brutality stemming from the police killing of George Floyd in Minneapolis have raised questions over how police officers use force.

Prior to March of this year, data collected by the Wisconsin Department of Justice was limited to certain officer-involved deaths — specifically “justifiable” shootings.

While lawmakers and the state's top Democratic officials are working on legislation in response to calls to overhaul policing procedures, action on the provisions might not come this year.

‘These youth voices are going to be heard’: Teaching, learning during election season 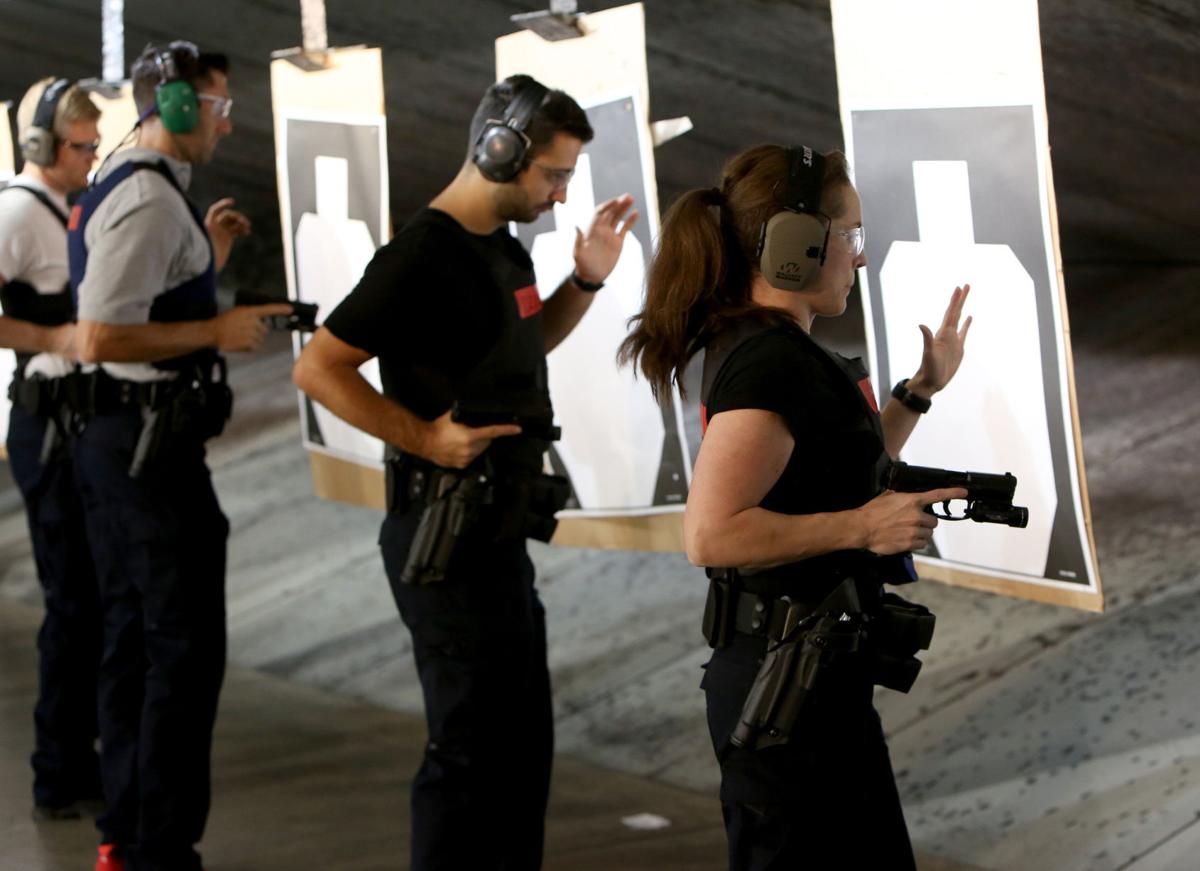 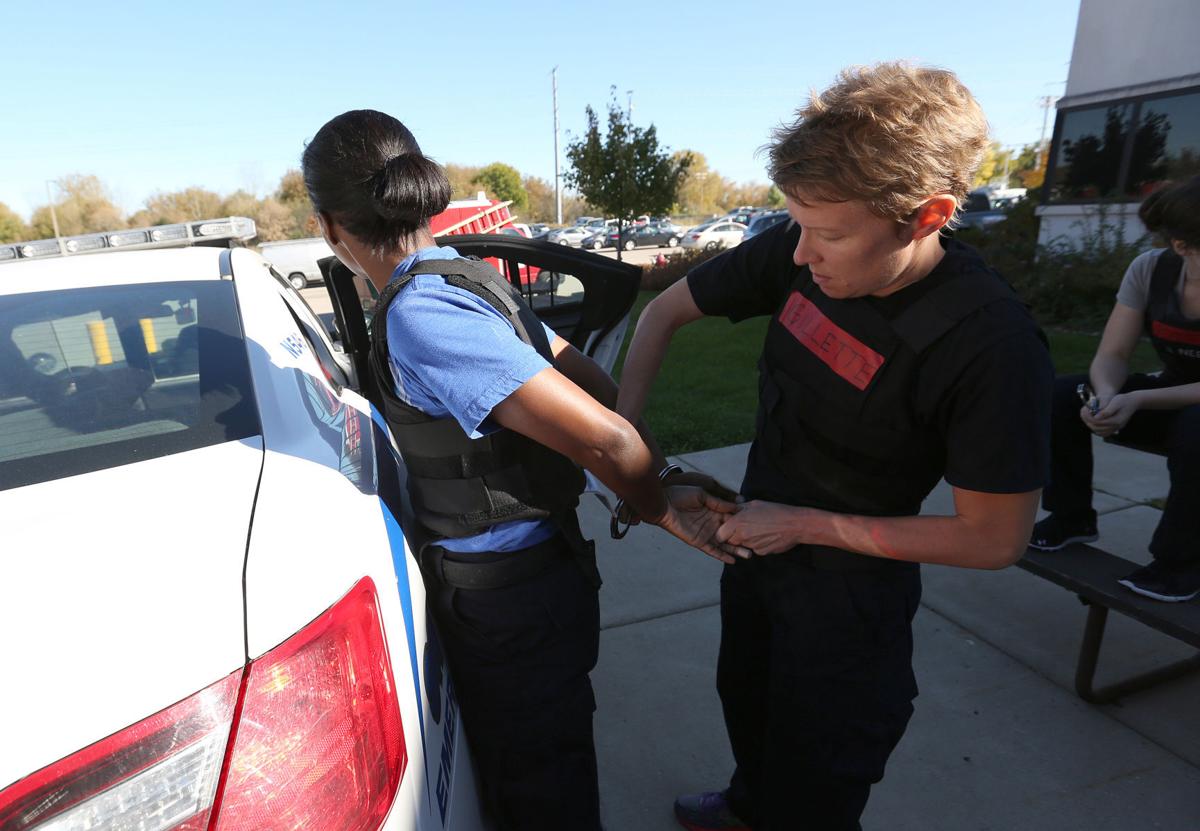 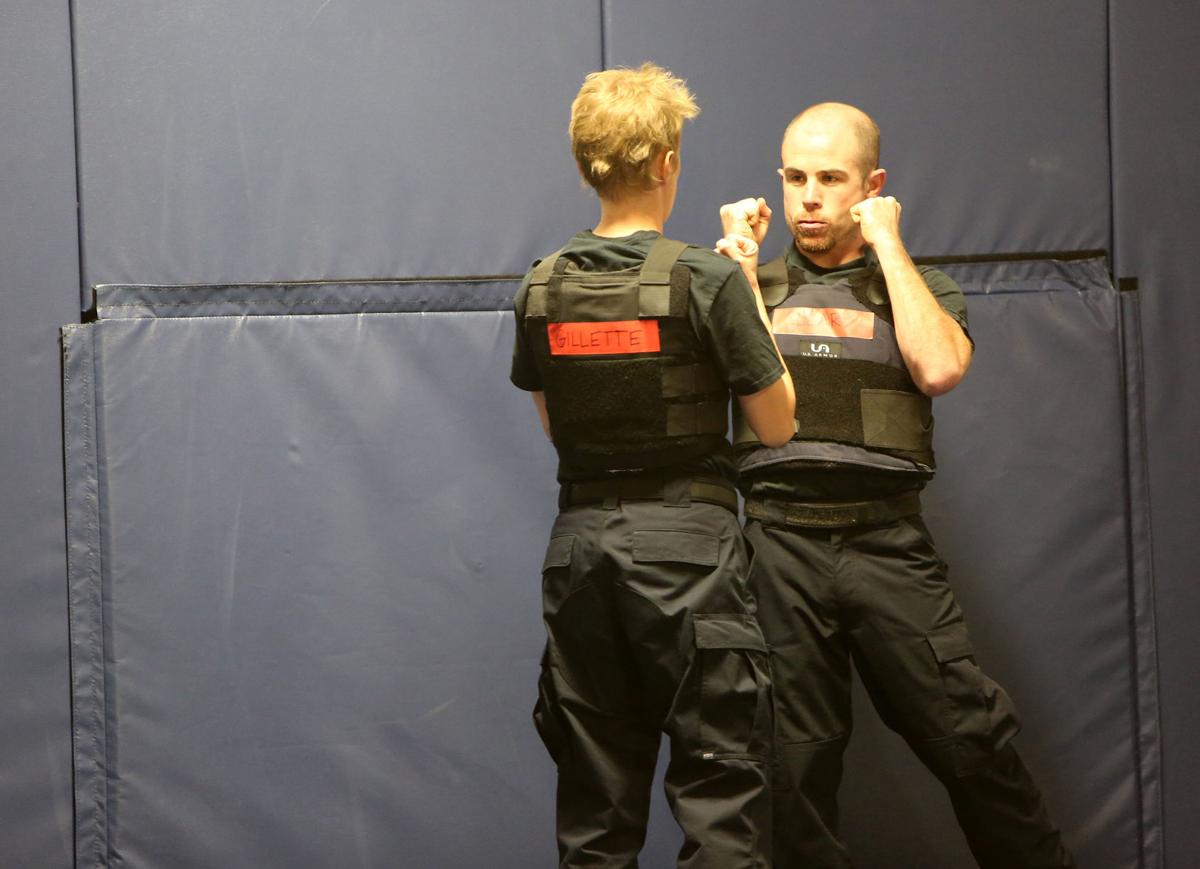 Recruits Jessica Gillette (left) and Nick Cleary train in defense and arrest tactics at the MPD academy in 2016.