To offer pedestrians and cyclists more space on shared paths, Madison’s Engineering Division will be moving forward to close some streets and lanes to car traffic.

As the weather turns to springlike conditions, more people are using Madison’s shared paths at the same time. This leads to overcrowding, which is especially dangerous during the novel coronavirus pandemic.

“While our Capital City path is often crowded on a nice spring, sunny day, last year we could get close to people. Now we have more of this distance requirement or desire,” transportation director Tom Lynch said. “We’d like to keep the ability to enjoy the path as we all kind of need the outdoors to keep our sanity.”

At a Transportation Commission meeting Wednesday, city staff offered presentations of possible road closures to allow for more “social distancing space.” Commission approval was not required as city staff have authority to implement the changes without additional approvals.

Commission members ultimately accepted the update and encouraged staff to complete the projects sooner rather than later.

Some of the proposed closures could take place yet this week.

“We want to move forward right away,” city traffic engineer Yang Tao said. “If the first batch of projects go well, we want to do more streets more quickly.”

Renee Callaway, the city’s pedestrian bicycle coordinator, stressed that the areas would be closed to local traffic only, meaning that the roadways would be accessible to emergency vehicles, delivery drivers, garbage collectors and residents.

“If you’re not local, this isn’t for you,” Callaway said.

Tao said the closures could stay in effect as long as Gov. Tony Evers’ “safer at home” order is in place.

City Council alders who joined the meeting were in support of the idea. Ald. Grant Foster, District 15, called the proposal of limiting roads to local traffic a “no brainer.”

Tao said the city could also consider closing a lane on John Nolen Drive. This would involve “significant” costs and require figuring out logistics. For example, a concrete barrier could be used to divide a lane into spaces for pedestrians and cyclists.

The city has already implemented changes due to the pandemic, which include shortening traffic signal cycles, removing the need to push buttons to initiate a pedestrian crossing and installing signs on shared use paths encouraging social distancing, or keeping six feet of space between people.

Repurposing some roadways would offer outdoor opportunities and the ability to practice social distancing. Callaway said traffic on multi-use paths is more condensed in the afternoon, making it more difficult to keep the recommended distance between people.

“It can be mentally stressful if you're out trying to do social distancing. but you don’t feel like you have the space,” Callaway said.

As more residents who may not be regular users of the city’s multi-use paths access them, commission member Brigit Brown observed that some may not be following or aware of path etiquette like staying to the right and passing on the left.

“It does get really tough when you don’t have folks who are on the same page with trying to social distance,” Brown said.

Path users should maintain a distance of six feet from other people, including when passing others, according to guidance from the city. Residents should consider using paths at less popular times and to walk in a single file line when in busy areas.

“There’s probably a growing consensus in the absence of a vaccine, it’s hard to have the economy bounce back,” Dane County Controller Chuck Hicklin said.

Gov. Tony Evers’ extension of ‘safer at home’ order through May eases some restrictions

The new order allows curb-side pick up at public libraries and the re-opening of golf courses with restrictions.

The city will hold a community meeting Monday to introduce three concepts. Participants can register in advance for the virtual meeting that will be held from 6:30 p.m. to 8 p.m.

Madison's Parks Division is working on a plan that will shape the next 15 to 20 years of improvements at Vilas Park along Lake Wingra. 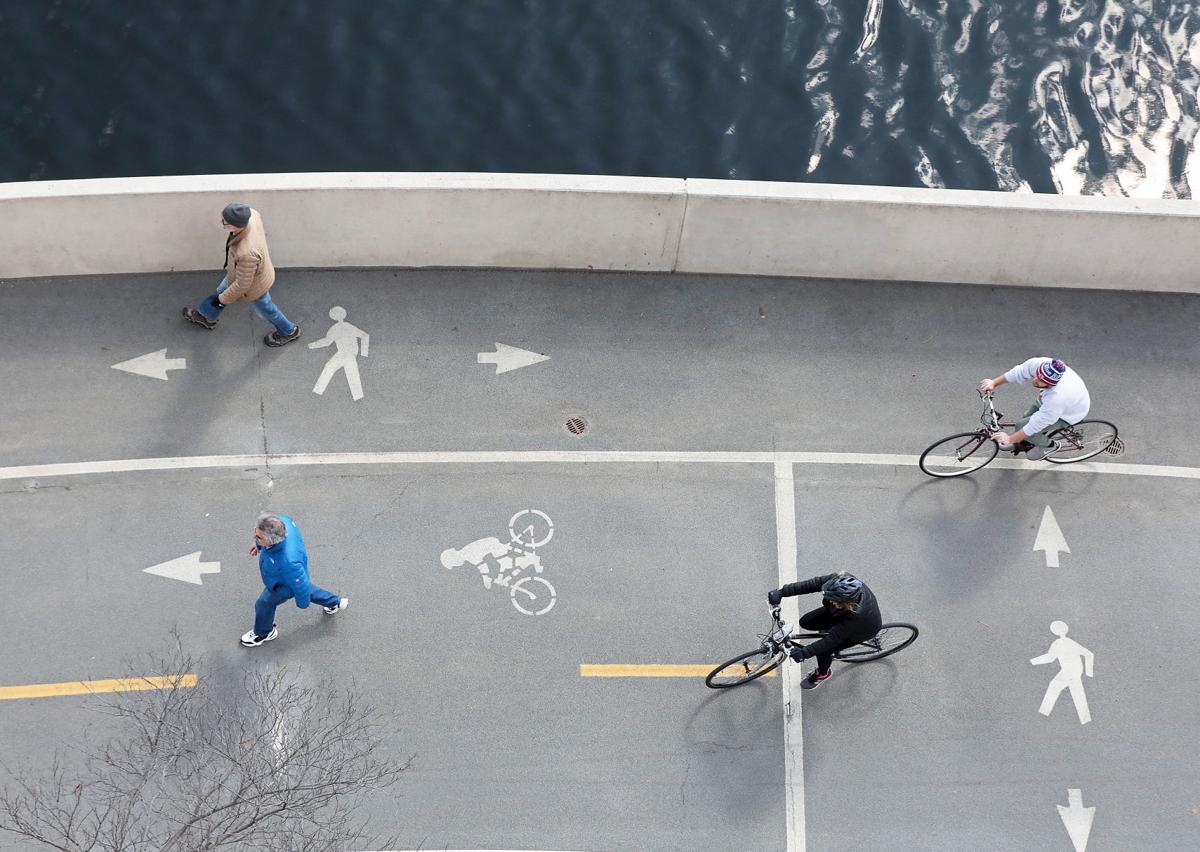 The city issued a guide at the end of March on how to use walking and bike paths responsibly during the COVID-19 health crisis, telling users to stay 6 feet apart even while passing. 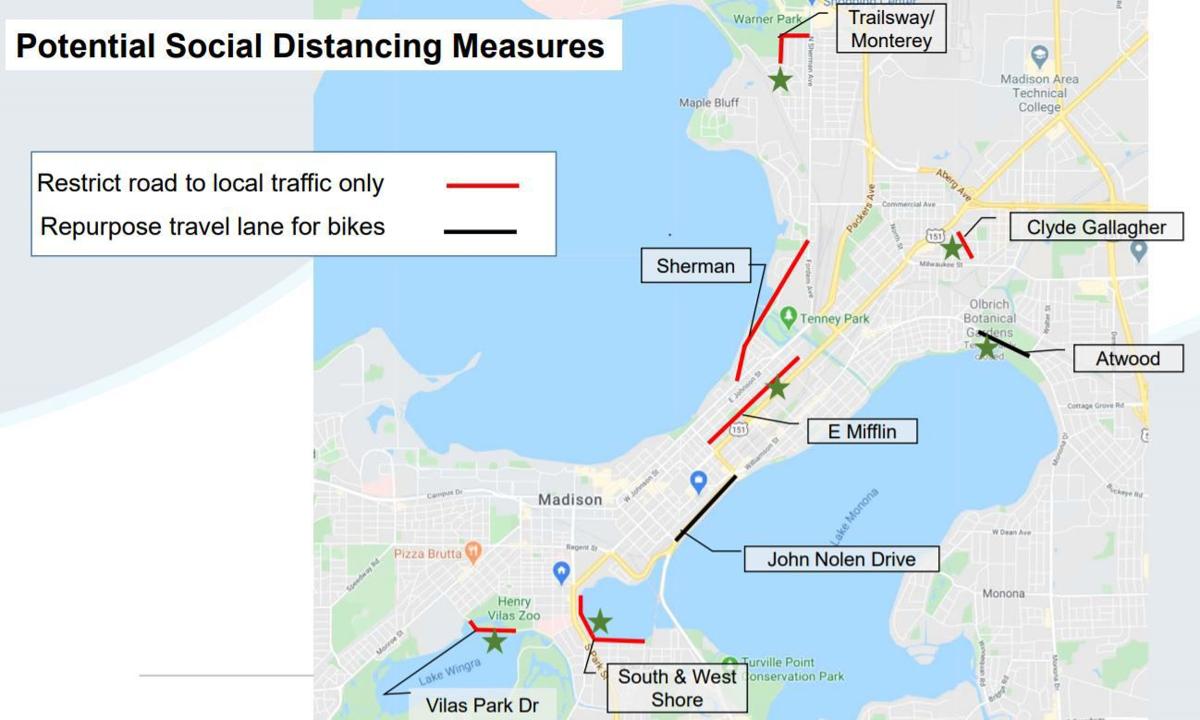 A map showing streets where closures and lane alterations could start happening as soon as this week to allow for pedestrians and bicyclists to maintain social distance. Staff recommended against any closures on John Nolen Drive, however. 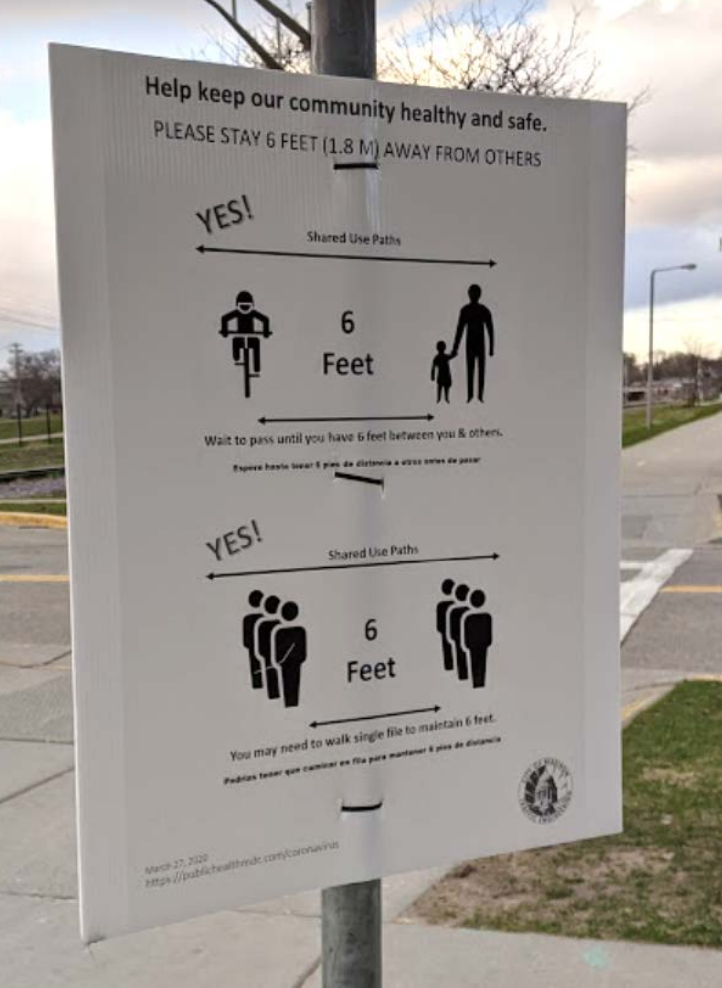 The city has implemented signs near multi-use paths reminding users to maintain social distancing amid the coronavirus pandemic.