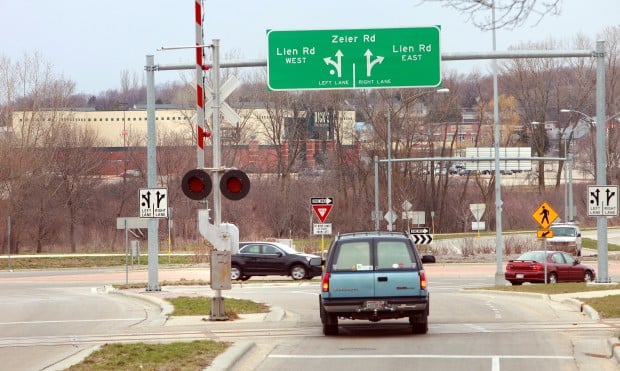 Roundabout at intersection of Lien Rd. and N. Thompson Dr. in Madison, on Sunday, April 21, 2013. Photo by Mike DeVries - The Capital Times

This roundabout on South Towne Drive by the Monona Wal-Mart was mentioned by a couple of Facebook commenters when asked which intersections they dislike most. "How those semis get around it, I'll never understand," wrote one.

Waunakee Village Administrator Todd Schmidt sums up attitudes about roundabouts like this:

"You don’t have many people jumping up and down clamoring for roundabouts. You really have more of two camps, those who really, really hate them and those who have a take-it-or-leave-it type of attitude."

Schmidt has first-hand experience observing attitudes surrounding roundabouts. His village has debated a state Department of Transportation plan to turn the intersection at Highway 19 and County Highway Q into a giant roundabout, the construction of which begins next Memorial Day.

State Rep. David Craig, R-town of Vernon, has introduced a bill that could give roundabout opponents their say. The proposal would require the DOT to get approval from local governments for roundabouts included in state highway projects.

“This legislation ensures that local communities have a say in the roundabout process and ensures that Madison bureaucrats, many of whom will never use the roundabouts they design, cannot trample on the voice of those who will actually navigate these roadway projects,” Craig says in a press release. He did not immediately return a call for comment.

The bill comes at a time when roundabouts, those circular intersections that inspire sweaty palms among the uninitiated, are becoming increasingly common. There are now about 200 such intersections in the state, including five in Madison which saw its first only three years ago. Several can be found in surrounding communities.

Scott Langer, a Madison assistant traffic engineer, says roundabouts have a public relations problem because they require practice and he concedes that they tend to cause fender-benders. But accidents within the circular intersections are significantly less severe.

These short-term pitfalls have to be taken in perspective, he says, as the city has to plan its traffic engineering for 30-year scenarios.

“They’re looking at it from a scientific standpoint. We know that we’re going to injure fewer people,” he says. “Even if we have more fender-bender crashes, people are not going to get hurt. You can fix a car, you can’t fix a human being.”

Madison police recently put out an advisory on two west-side roundabouts, one at Mineral Point and Pleasant View roads, and the other at County Highway M and Valley View Road, which “have seen a fair number of accidents since they opened. Fortunately, most of these accidents have been minor (which is a benefit of the roundabout design),” the advisory says.

Langer says over time, accident rates at roundabouts tend to fall to signalized intersection levels. And the city is hoping help that happen by landscaping the roundabouts with trees and bushes to reduce sight distances, causing drivers to reduce speeds when entering.

“Nationally what they’ve found is that if the sight distance is too good coming into a roundabout, the speeds go way up,” he says. “It’s kind of counterintuitive.”

And the Mineral Point roundabout is in a rural setting, which means the speeds tend to be even higher. But Langer notes that as urban development comes — the area is slated for construction of the second phase of the UW Research Park, which is expected to employ up to 10,000 people — the roundabout will be less accident-prone.

“We expect that as Mineral Point grows in the future and we turn it into more of an urban cross section, that will improve it greatly,” he says.

A similar roundabout on the east side at Lien Road and Thompson Drive has generated “hardly any complaints,” he says.

“The main reason for that is the intersection was so bad, you sat at the signal for so long before, that people understand the benefit over there,” he says.

But those roundabouts wouldn’t be affected by Craig’s bill, which only addresses state highway projects. Langer says the legislation would affect few roundabouts within the city of Madison.

“Most of our roadways wouldn’t (be affected) because most of the state highways through town are actually connecting highways, which means they use our roads and they pay for some of the maintenance, but they’re actually our facilities,” he says.

The exceptions are Stoughton Road, aka Highway 51, and Verona Road.

“If this law had been in place and WisDOT designed that, and the city didn’t want that, theoretically it could have come into play,” he says.

But he adds: “It’s not something the city of Madison would fight anyway. We’re pretty on-board with them for the safety reasons. They don’t work everywhere, but they definitely have their uses at certain locations.”

But the law likely would have impacted the Waunakee project, says Schmidt, at least the process, if not the outcome.

After encountering overwhelming opposition, the village hired an engineer, reviewed 18 options, and landed on the roundabout as the lesser of all evils. Still, while the DOT took the village’s position on the interchange into consideration, state officials still made the final call.

If Craig’s bill had been in place, Schmidt says, “The process of gaining that public opinion would have been pursued at even greater depth, because there would be knowledge that it was a true factor.”

In coming weeks, Wisconsin expects only about 70,000 doses a week. So even if all 1.6 million people are made eligible, when they will receive their shots, and what they have to do to get them, is still an open question.

Vos criticized Gov. Tony Evers in a pair of tweets, but limited replies to those tweets to only the 768 accounts he follows.

Plain Talk: The mother of all false equivalencies

Roundabout at intersection of Lien Rd. and N. Thompson Dr. in Madison, on Sunday, April 21, 2013. Photo by Mike DeVries - The Capital Times

This roundabout on South Towne Drive by the Monona Wal-Mart was mentioned by a couple of Facebook commenters when asked which intersections they dislike most. "How those semis get around it, I'll never understand," wrote one.