Foxconn is now only eligible for up to $80 million in state tax credits under a new deal announced Tuesday — a fraction of the original $2.85 billion agreement for the Taiwanese tech company's promised manufacturing work in southeastern Wisconsin.

Under the scaled-back agreement, the company would only need to create 1,454 jobs to earn incentives, or 11% of the 13,000 it originally committed to generate as part of a state-of-the-art factory that officials had pledged would vault the state to international prominence. And rather than a $10 billion investment, as Foxconn initially agreed to, the company would need to log $672 million in construction and machinery costs to secure the full credits.

Originally approved under former Gov. Scott Walker's administration and once deemed the "eighth wonder of the world" by former President Donald Trump, the Racine County project has thus far failed to live up to expectations set by its champions four years ago. In its first two years of its original deal, for example, the company didn't employ enough people to qualify for tax credits.

Gov. Tony Evers, who first announced Monday his administration had struck a new agreement with Foxconn surrounding its Mount Pleasant campus, touted the $2.77 billion difference between the two arrangements in releasing details about the deal a day later.

“When I ran to be governor, I made a promise to work with Foxconn to cut a better deal for our state — the last deal didn’t work for Wisconsin, and that doesn’t work for me,” he said shortly after the Wisconsin Economic Development Corporation Board voted to approve the deal.

Still, the details Evers shared and the contract itself, provided to the Cap Times in response to an open records request, provide little insight into what Foxconn will produce to qualify for the incentives.

While officials once promised the Racine County site would host a Gen 10.5 LCD manufacturing factory, those plans have repeatedly been walked back, as the company initially considered a Gen 6 facility to producer smaller screens for phones and other devices. Further media reports note Foxconn had considered ventilator production, robotic coffee kiosks and more. 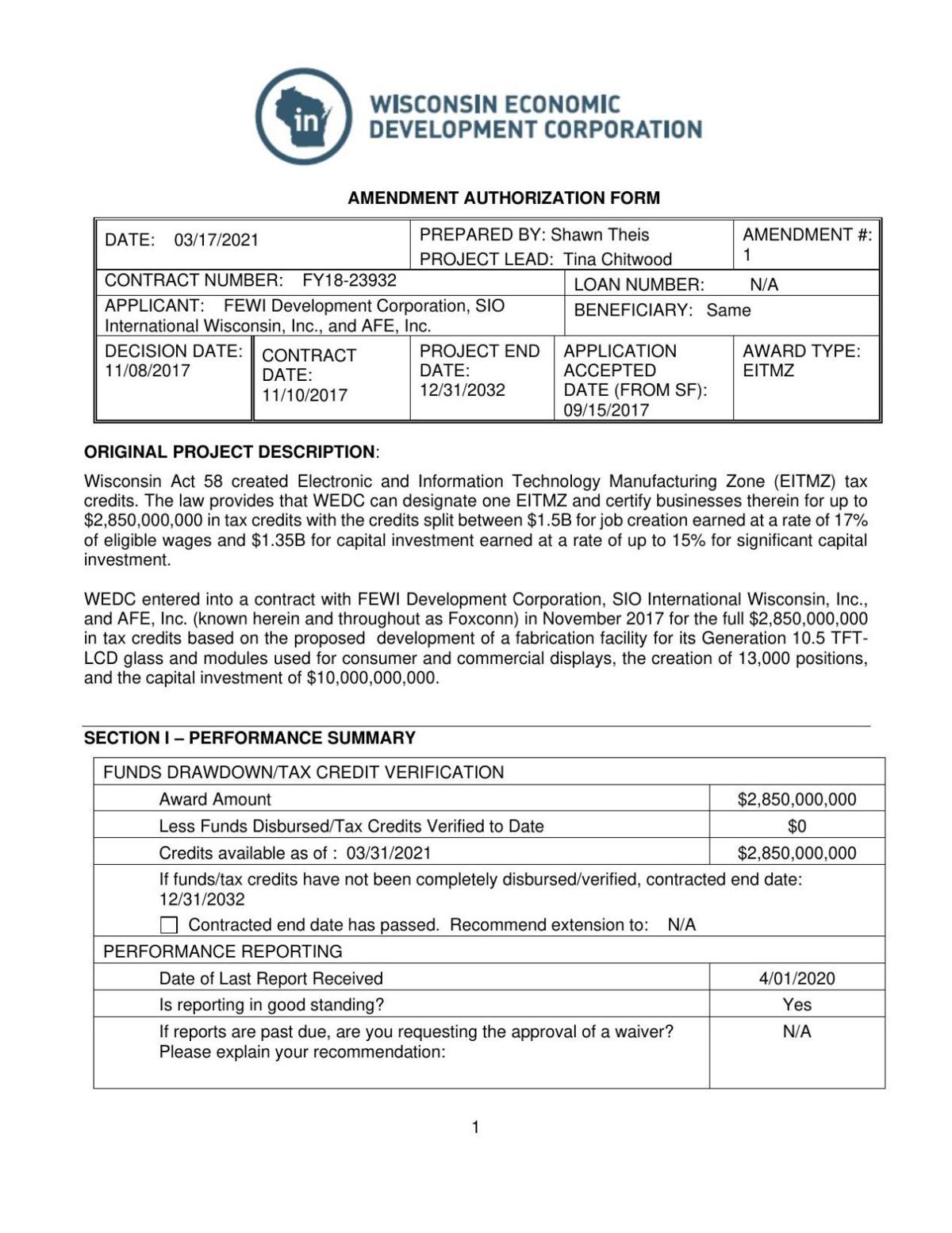 Under an amendment authorization form, approved by WEDC in mid-March, the project description shows Foxconn proposed a project to "create a high-tech manufacturing ecosystem within its campus."

"This project is considered Phase I and it will include the construction and development of facilities for the manufacturing of data infrastructure and other operations related to high-performance computing, cloud computing, and artificial intelligence (AI)," the 13-page form read.

It added that the company's business pursuits "are not limited to just data infrastructure," listing Foxconn has the ability "to explore new industries such  as electric vehicle, digital  health, and robotics using AI, semiconductor, and 5G technologies."

Under the new agreement, the company said it would make $672 million in investments in new construction, machinery and equipment through the end of 2025.

Foxconn Technology Group in a statement said the amended terms "are based on Foxconn’s current projections for digital infrastructure hardware products through 2025," and further alleges the company "is strategically positioned within Mount Pleasant to make Wisconsin one of the — if not the — largest manufacturer of data infrastructure hardware in the United States."

Still, the statement makes no promises about what will be produced at the site.

WEDC Secretary and CEO Missy Hughes said in a statement the deal "provides the opportunity to be responsive to the marketplace that a modern, forward-looking company like Foxconn needs to pursue innovation."

Break-even point comes at end of 2028

The newly negotiated agreement ends seven years before the original one did, granting Foxconn eligibility for tax credits through the end of 2025. 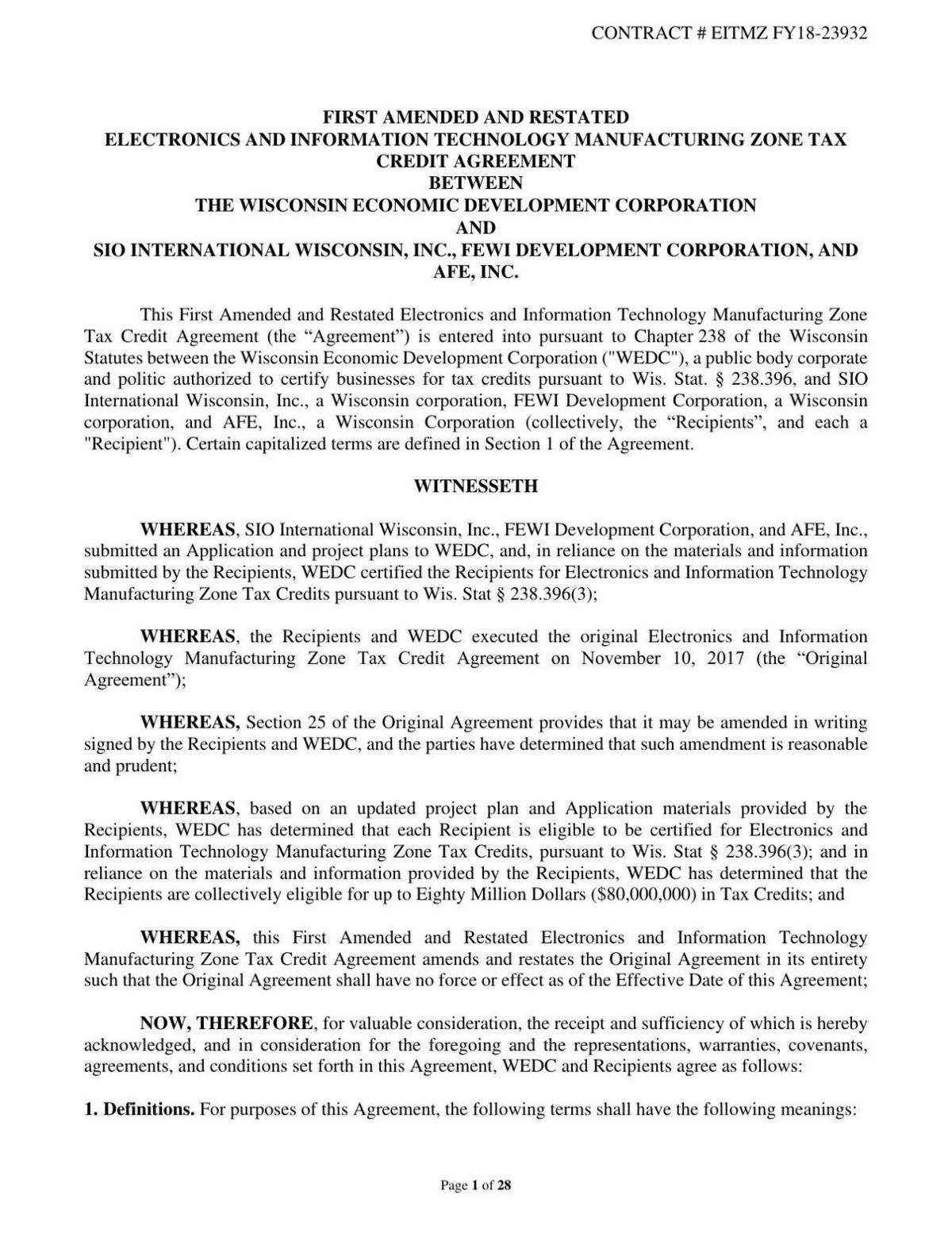 Under an analysis of the terms WEDC staff performed of the language, the break-even point on the framework is the end of 2028, according to the amendment authorization form.

The break-even point in the original deal, which would have ended in late December, 2032, was the 2042-43 fiscal year, according to a previous analysis from the nonpartisan Legislative Fiscal Bureau.

The agreement now includes Foxconn Industrial Internet (FII), a subsidiary not party of the original contract that has been constructing facilities on the campus. In all, four subsidiaries are now part of the current agreement, each with their own expected job creation benchmark figures over the length of the deal.

Further, the contract stipulates the company can get a tax credit covering 7% of the wages for eligible employees, rather than the 17% rate included in the original deal.

The language was the result of start-and-stop negotiations between the Evers administration and Foxconn that have ramped up in recent months.

Evers in spring 2019, just a few months into his first term, said the state was renegotiating the tax incentive deal. But those negotiations stalled in intervening years. More recently, in fall 2020, the administration warned the company wouldn’t be able to receive state tax credits until a new contract is drafted. The state also revealed that it didn't expected to make payments to Foxconn through mid-2023 under the original terms of the deal, according to the Department of Administration's budget request.

The deal drew support from both sides of the aisle Tuesday, with supporters framing it as a win-win for Foxconn and taxpayers.

Meanwhile, fellow board member and Assembly Minority Leader Gordon Hintz, D-Oshkosh, who said the vote to approve the contract was unanimous, praised the creation of what he called "a more realistic agreement" between WEDC and Foxconn that "right-sizes a contract that previously did not serve the best interests of Wisconsin."

Assembly Speaker Robin Vos, who was critical of Evers for working on a new deal of Foxconn in media comments over the weekend, said Tuesday he's "happy that Wisconsin and Foxconn were able to come to an updated agreement and glad the company continues to grow in Mount Pleasant."

Vos, R-Rochester, is also a WEDC Board member.

Evers in an announcement Monday said “a resolution is near” between the Taiwan-based company and the state’s jobs agency.

“I think this is something that would be fantastic for our economy, for our region and for our state,” Mayor Satya Rhodes-Conway said.

Registration for what's currently the only online budget hearing to be hosted by the Legislature's powerful Joint Finance Committee filled up within minutes. Now, groups are redoubling their efforts for more remote options.