The sweeping announcement also ushers in a new, relaxed order effective Tuesday that lifts all travel restrictions and dials back regulations on certain businesses, while also allowing tennis courts and disc golf courses to reopen across the county.

Forward Dane will be a blueprint for a “safe and gradual reopening,” Dane County Executive Joe Parisi said in a statement Monday.

“We, like many in our county, are eager for economic stability in our community,” Parisi said. “We also know that slowing the spread of COVID-19 is critical in order to keep people safe and protect our hospital systems.”

The re-opening plan includes nine benchmarks connected to epidemiology, health care and public health. Some metrics are an extension of the state’s Badger Bounce Back plan — which is essentially moot due to the Wisconsin Supreme Court striking down Gov. Tony Evers’ stay-at-home order — while others are specific to Dane County.

The county’s original public health order was set to lift on May 26, but the new order will remain in effect until the public health department “determines that criteria to implement Phase One has been achieved,” according to the text.

As Dane County meets the re-opening criteria, the community can progress through phases that gradually minimize restrictions across a variety of sectors from long-term living facilities to schools and mass gatherings, according to the plan.

Public Health Madison & Dane County will update the progress toward the goals on a weekly basis online.

As of Monday, Dane County fully meets five of the nine benchmarks including:

“Metrics help us understand the growth in cases, the health care system’s current capacity, and public health’s ability to contain the spread of the virus,” Public Health Madison & Dane County director Janel Heinrich said. “These metrics are critical for assessing our readiness to reopen Dane County.”

Dane County residents will see all restrictions on travel lifted under the latest directive, as businesses are able to lay the groundwork to reopen down the line.

The order, effective at 8 a.m. Tuesday, allows nonessential businesses to begin stocking supplies, to clean and facilitate remote work, as well as continuing with basic functions such as processing payroll and employee benefits and more.

Those businesses are also able to do curb-side pick-ups or drop-offs, as allowed under a previous statewide order that the county adapted, while some retail stores are still able to have up to five customers in their stores at once — another holdover provision from the former statewide directive.

The changes come as local officials say they’re “comfortable moving to the phase that allows businesses to prepare to reopen safely.”

“The data look promising, but widespread community testing began just a week ago, and limited testing results are in,” Heinrich said. “We need some time to assess the impact of widespread testing before we make any drastic changes.”

In addition to golf courses and drive-in theaters, which were previously opened under past statewide orders that the county put in place locally, tennis courts and disc golf ranges are also allowed to operate beginning Tuesday under the new language.

For those interested in playing tennis, only two individuals would be allowed on a court at any one time, and players must keep one empty court between them and any other pairs playing.

But rather than copying those standards and applying them locally, city and county leaders added other criteria as well, including one tracking the number of infected health care workers over a 14-day window; one measurement surrounding community spread; and another on the timeliness of reporting positive cases.

The local standards also differ in that there are three different colors used on the county’s online dashboard to indicate progress in achieving the benchmarks: green, yellow and red. The state plan only had two: green and red.

As of Monday, five of the county’s benchmarks were fully met, thus green; while the other four were partially met, thus yellow, a color that has different significance depending on the criteria it’s applied to.

For example, one “yellow” benchmark pertains to the implementation of more than 800 tests per day for Dane County over the most recent 14-day period. Because that listing is “yellow,” it means that the county is seeing between 400 and 800 tests done per day.

If the county were being evaluated under the former state plan, four of the six listed criteria would have been met, including a downward trajectory of influenza-like symptoms and COVID-19 like symptoms within a 14-day period; and having 95% of hospitals meet certain patient treatment and staff testing standards, according to the Department of Health Services website.

Fully or partially meeting the targets will allow Dane County to move through phases that gradually loosen restrictions across long-term living facilities, schools, businesses, workplaces, places of worship, recreational activities and mass gatherings until a “new normal” is reached.

The public health agency expects to spend at least two weeks, or one full incubation period for COVID-19, in each of the first three phases of Forward Dane to assess the data.

Dane County will be in the “prepare for safe reopen” phase starting Tuesday with minimal loosening of restrictions on businesses.

“Changes in orders are confusing, and we know how frustrating they have been for businesses and the public,” Heinrich said. “By enacting today’s Prepare for a Safe Reopen phase, we are making sure each sector has time to get things ready for safe operations during Phase 1.”

To move to the first phase, all nine of its goals must be marked yellow or green -- which is currently the case.

Dane County would then continue in the third phase until widespread protections such as a vaccine or an effective treatment for COVID-19 are available.

With each phase comes more and more flexibility.

For example, under phase one, K-12 schools could conduct minimum basic operations and activities approved by the public health department. Many public spaces like offices, restaurants, places of worship, gyms and community centers could operate at 25% capacity. Outdoor restaurant seating and outdoor gatherings of 25 people would be allowed.

“Like everyone else, we are eager to reopen businesses and work towards normalcy, but we want to be realistic and practical. We don’t want to rush the process and undo the progress we have made so far,” Madison Mayor Satya Rhodes-Conway said in the statement. “Data will guide us, and we thank everyone in our community for their continued diligence and patience as we forge this path forward together.”

More details on each phase can be found in the Forward Dane report.

Following a ruling from the Wisconsin Supreme Court striking down the statewide stay-at-home order, Public Health Madison & Dane County issued its own to continue containing the coronavirus pandemic.

Court strikes down Evers' stay at home order; Dane County implements its own

The court ruled 4-3 to block Gov. Tony Evers' administration's extension of the so-called "safer at home" order Wednesday. The order was set to expire May 26.

With no "safer at home" order in place, local officials can choose to implement a county-specific template order, developed by the state, that models the Evers administration's extended stay-at-home language and reopening framework.

Full reopening of Dane County businesses, activities up in the air under new plan

There are few details available for residents of Wisconsin’s second largest county about what the “new normal” — or the last of four phases included in the "Forward Dane" plan.

Under the new order, restaurants, gyms, retail stores and others would be able to operate at 25% capacity with certain physical distancing measures in place beginning next week.

Scott Walker: American greatness will prevail over the forces of darkness 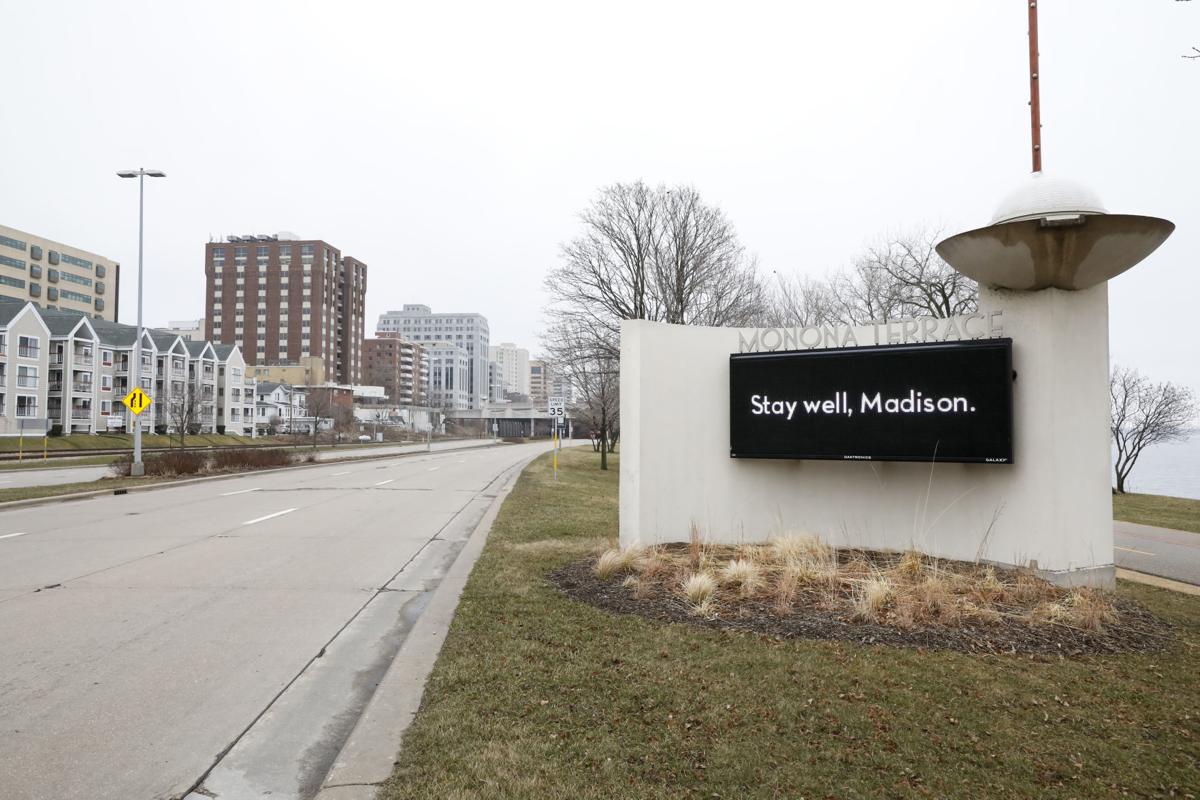 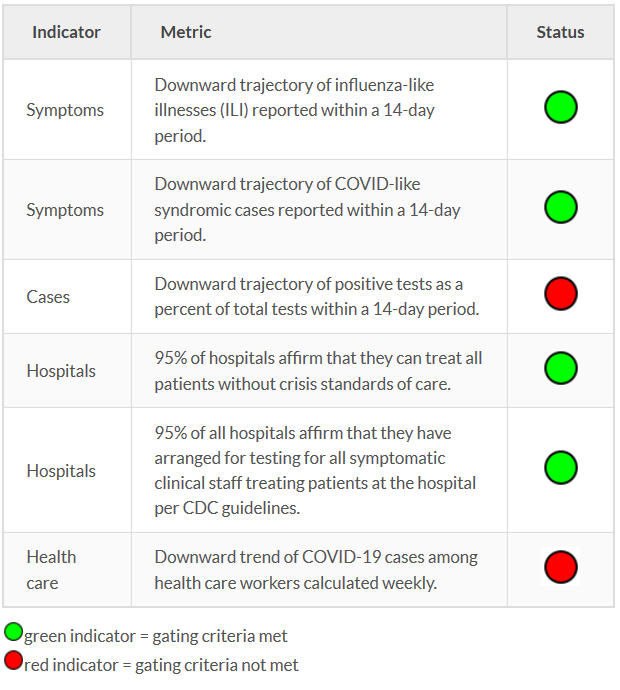 The Wisconsin Department of Health Services listed criteria on its website Monday under the now-moot Badger Bounce Back plan. 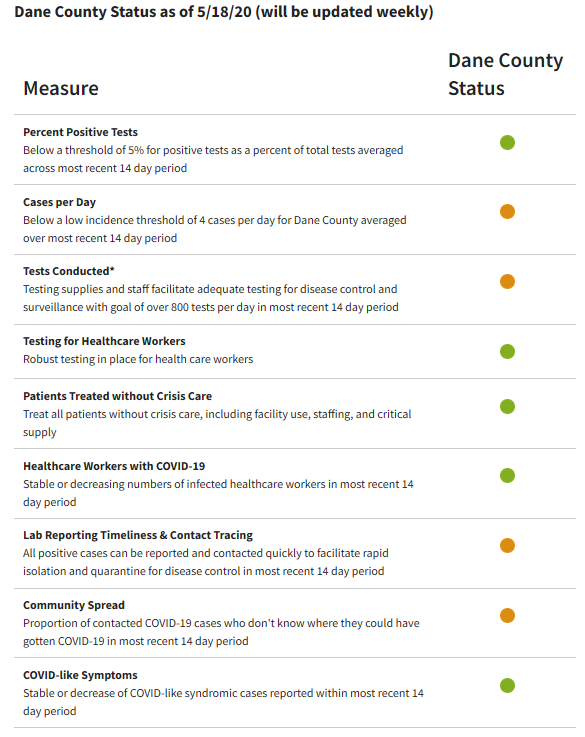