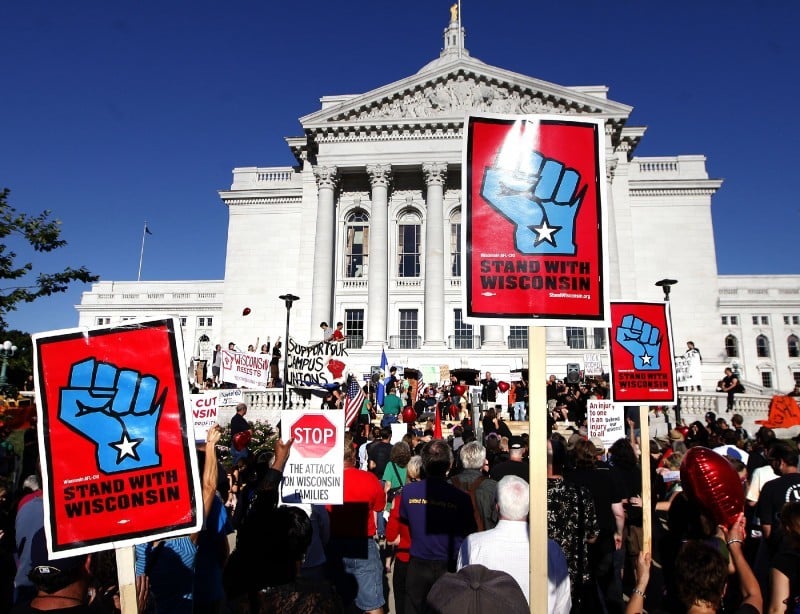 Hundreds of union members and supporters march toward the state Capitol during a rally to protest the policies of Gov. Scott Walker last summer. 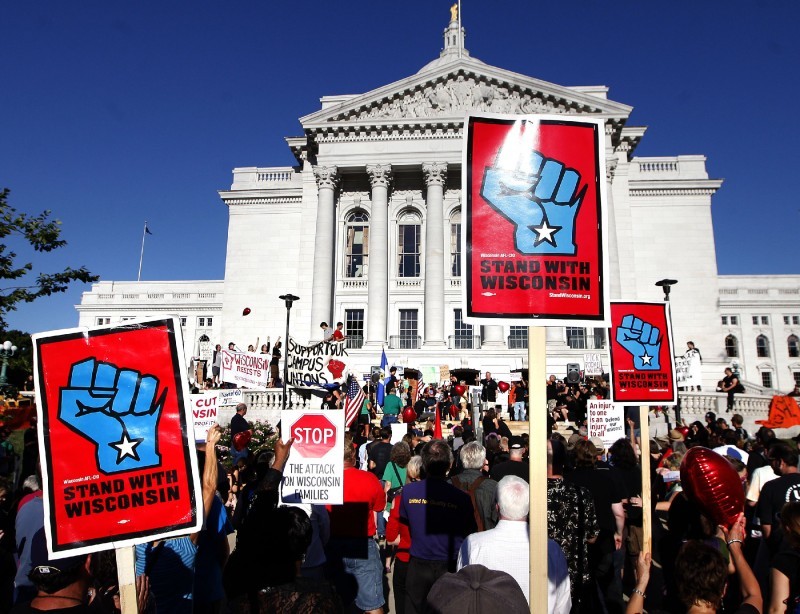 While union members and supporters spent weeks protesting the collective bargaining curbs imposed two years ago by Gov. Scott Walker, many are in support of his proposal to end residency requirements.

Hundreds of union members and supporters march toward the state Capitol during a rally to protest the policies of Gov. Scott Walker last summer.

While union members and supporters spent weeks protesting the collective bargaining curbs imposed two years ago by Gov. Scott Walker, many are in support of his proposal to end residency requirements.

It didn’t take the release of a video in which Gov. Scott Walker details his “divide and conquer” strategy for repealing collective bargaining to a billionaire donor to convince some in the law enforcement community it was time to change their vote in June’s recall election.

On Friday, a day after the video was released to the press, the West Allis Professional Police Association, which had endorsed Walker over Milwaukee Mayor Tom Barrett in November 2010, announced it was backing Barrett in the June rematch for governor.

“I didn’t think I’d ever be voting Democrat. I know some of my friends feel the same way,” says Tim Fletcher, a detective with the West Allis drug unit and a voting member of the association’s political action committee. “But we’re all saying, ‘How can we vote for him again? We can’t.’”

Fletcher says the association’s PAC members took a vote a few weeks ago and decided to endorse Barrett. Typically, he said, police officers vote Republican because they think most Democrats are too soft on crime. Prior to Walker, collective bargaining wasn’t much of an election issue at all.

But rumors had started to swirl prior to the November 2010 election, causing Fletcher and others in the law enforcement community to question then-candidate Walker on his intentions regarding collective bargaining rights and the state pension system, should he beat Barrett.

Like the other gubernatorial candidates, Walker was invited to address the police union and questioned on his views. What he told Fletcher and others in 2010 was a far cry from what he told billionaire donor Diane Hendricks in the video, shot in January 2011, two short months after he won the election.

While revealing to Hendricks that he would take a “divide and conquer” approach to targeting public worker union rights, Walker told the West Allis Professional Police Association that he wasn’t going to touch collective bargaining rights or pensions, Fletcher recalls.

He says Walker did add that should he go after collective bargaining rights he would exempt police and fire for public safety reasons.

Fletcher says the subsequent endorsement vote by the union's PAC members was close, but went to Walker.

“Police are usually Republican voters,” Fletcher says. “Every time we endorse Democrats we get flak from a lot of our members. I think it will be interesting to see how much negative feedback we get from our members over the (Barrett) endorsement.”

Fletcher and others wonder how much impact the video -- not to mention Walker's direct moves to curb collective bargaining -- will have on voters.

For starters, although the Walker recall effort was triggered by his repeal of most collective bargaining rights for public workers, job creation is currently the top issue of concern among Wisconsin voters, according to a Marquette Law School poll released last week.

Walker is also a polarizing political personality. His popularity among voters has hovered around 50 percent for months, suggesting his supporters will view the admission caught on the video without consternation while his detractors will see it as confirmation of everything they already oppose about him. Thus, it seems the video, while described as "shocking" by Barrett's campaign, will do little to sway most voters.

The Marquette poll found only a small percentage of state voters, around 4 percent, remain undecided in the June election.

Phil Walzak, a Barrett spokesman, believes it’s those voters who the Walker video could potentially impact. And for them, he says, it won’t be because the video touches on Walker’s views on collective bargaining but rather because it provides a glimpse into Walker’s style.

“Even if this small percentage of voters isn’t moved by collective bargaining issues, they are moved by issues of trust,” Walzak says. “Walker tells us one thing, and billionaire donors another. I think that is a turnoff to voters who are undecided and in the middle right now. Something like this could be really big for them.”

The video does include an exchange between Hendricks and Walker in which she asks if he intends to make Wisconsin a right-to-work state and, if so, if there is anything she can do to help.

“Well, we're going to start in a couple of weeks with our budget adjustment bill. The first step is, we're going to deal with collective bargaining for all public employee unions, use divide and conquer,” was Walker’s response to her.

While a state representative in 1993, Walker co-sponsored right-to-work legislation. His campaign has repeatedly stated he has no intentions to make Wisconsin a right-to-work state, now. Barrett, however, charged doing so would be Walker’s next move.

“There is absolutely no doubt in my mind that what Gov. Walker did was the beginning of a divide-and-conquer strategy that was intended to make Wisconsin a right-to-work state,” Barrett told reporters at a press conference at the Wisconsin Professional Police Association offices in downtown Madison.

Walker video raises question of right-to-work; GOP says no thanks

There are no plans to force a right-to-work bill through the state Legislature, Republican leaders said Friday, a day after a video was released that showed Gov. Scott Walker discussing his strategy for weakening unions.

A Beloit billionaire who is Gov. Scott Walker's largest campaign donor owed no state taxes in 2010 because of a change in her corporation's structure.

Bingeworthy: 'Picard' looks ready to engage with a new generation of Trek fans

With release of state funding, Wisconsin Arts Board poised to dole out grants to nonprofits