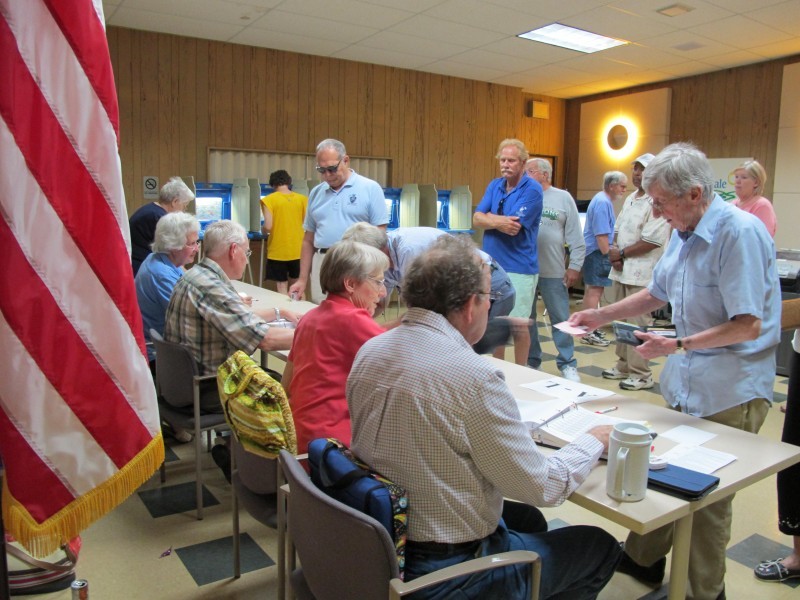 Residents in Glendale, Wis., line up Tuesday to vote in a Democratic primary Senate election between Sandra Pasch and Gladys Huber. Pasch, a Democratic member of the Assembly from Whitefish Bay, won easily and will face incumbent Alberta Darling, a Republican, next month. 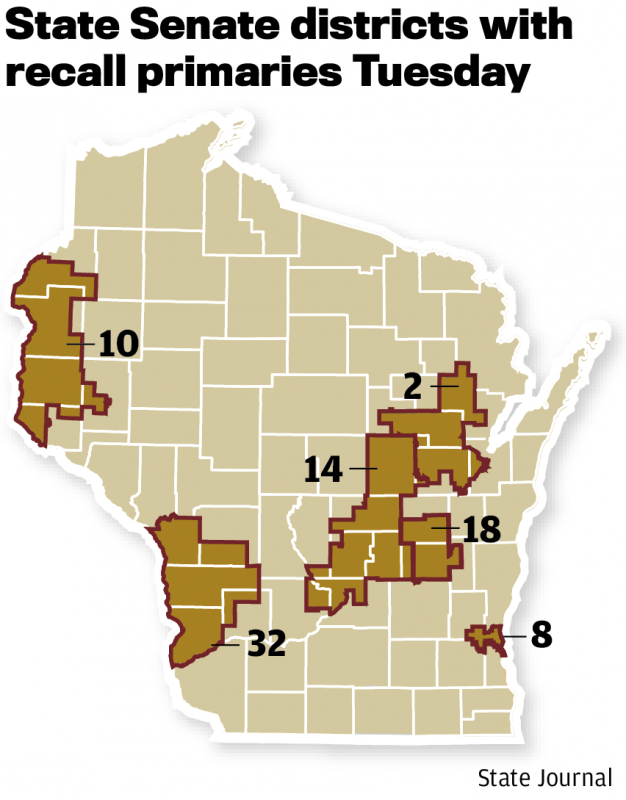 None of the six placeholder or "fake" Democratic Senate candidates pulled off an upset victory during the first round of a historic recall election season in Wisconsin Tuesday.

But then again, few expected they would.

"We certainly did not expect any victories out of the protest candidates," said Katie McCallum, a spokeswoman with the Republican Party of Wisconsin. "They did the job they were intended to do ... which was to give the incumbents time to get back to their districts and talk with voters after passing the budget."

Charles Franklin, a UW-Madison political science professor, said that if any of the fake candidates had won Tuesday, it "would have been huge."

For the most part, they weren't even close. Five of six won 30 to 36 percent of the vote according to results presented by the Milwaukee Journal Sentinel, though even that was significant, Franklin said.

In an interview prior to the close of the polls, he said any fake candidate capturing 20-30 percent of the vote was an indication that Republicans crossed over to vote in the Democratic primary.

But there are also plenty of signs that Democratic voters are energized.

Turnout in the recall primaries was enormous by primary election standards and not that bad compared to even fall general elections. Former Oshkosh Deputy Mayor Jessica King, for example, received just under 20,000 votes Tuesday against fake candidate John Buckstaff. When she ran for Senate in 2008, there were only 1,849 votes cast in the Democratic primary.

That was an uncontested vote, but her general election total in a very close race against Hopper was 41,668, and that was during a presidential election year that saw enormous turnout statewide.

The one fake candidate who received a respectable number of votes Tuesday was Isaac Weix of Menomonie, who probably benefited from a last-minute get-out-the-vote effort by the St. Croix County Republican Party.

Weix, who ran unsuccessfully as a Republican for the Assembly last year, ran as a Democrat Tuesday and won 46 percent against real Democrat Shelly Moore, a public school teacher who is trying to unseat Harsdorf.

Gillian Morris, a spokeswoman with the Democratic Party of Wisconsin, said Tuesday that the "significant number" of Republicans voting in the Moore-Weix primary indicates that Republicans want to eliminate a tough competitor.

"It would seem Sheila Harsdorf is scared of how well Shelly Moore can do if the Republicans would work that hard to eliminate her from the ballot," Morris said.

The state's historic recall efforts that prompted voters in places like La Crosse, Baraboo, Portage, Whitefish Bay, Fond du Lac and Green Bay to head to the polls Tuesday began over a controversial, Republican-backed effort to all but eliminate collective bargaining rights for most public workers.

The six Republican senators face recall elections for voting along with the bill, which Republican Gov. Scott Walker introduced in February. Three Democratic senators face recalls for fleeing to Illinois in what turned out to be an unsuccessful attempt to halt a vote back home in the Senate on the collective bargaining bill.

"Everywhere I go, I hear voter remorse," Rep. Jennifer Shilling, D-La Crosse, said in a telephone interview after winning 70 percent of the vote in her primary race. She will now face Sen. Dan Kapanke, R- La Crosse, in the Aug. 9 general election. "People are wide awake and paying attention to what has been happening since February."

Morris said she expects voters to stay engaged in the recall efforts because of the ongoing passage of "extreme policies, like redistricting" by Republicans in Madison.

"Our folks are pretty energized," she said. "And we think it will stay that way."

President Barack Obama's political arm at the Democratic National Committee is getting involved in the Wisconsin state Senate recall elections.

Residents in Glendale, Wis., line up Tuesday to vote in a Democratic primary Senate election between Sandra Pasch and Gladys Huber. Pasch, a Democratic member of the Assembly from Whitefish Bay, won easily and will face incumbent Alberta Darling, a Republican, next month.