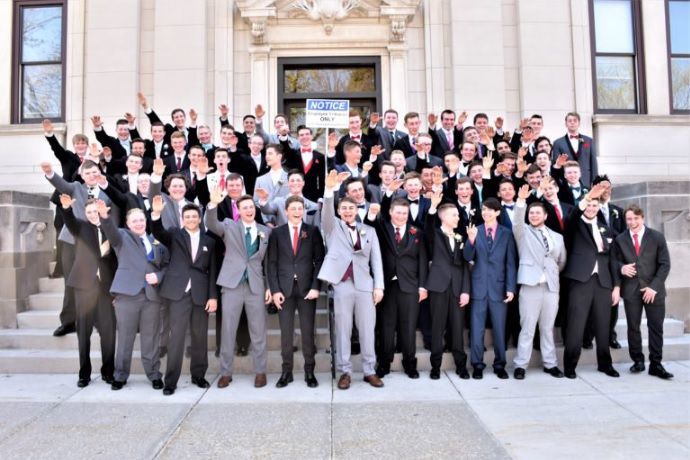 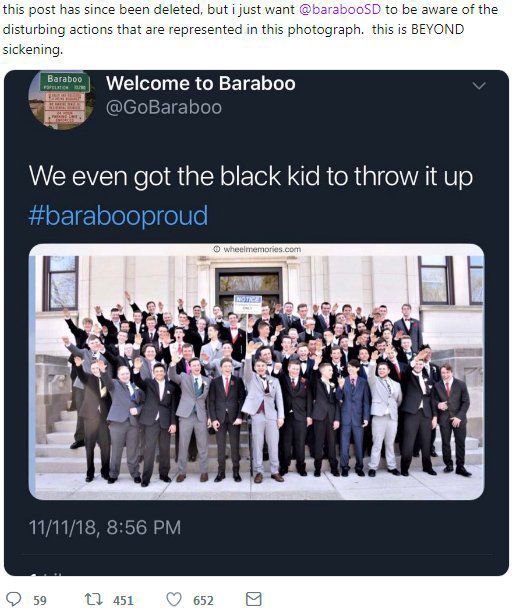 The Baraboo School District and Police Department are investigating a photo posted on Twitter that shows boys in the class of 2019 giving a Nazi salute as they posed before prom last spring.

The photo shows dozens of boys giving a Sieg Heil salute. One boy is flashing an “OK” with his hand, a common white power sign. Another stands solemnly in the back with his hands to his sides, seemingly in non-conformance.

According to Madison365, Twitter user @CarleySidey retweeted the original tweet from an account called @GoBaraboo, which was deleted. Young Turks reporter Jules Suzdaltsev retweeted it and it’s now getting international exposure.

If anybody from Baraboo High School in Wisconsin can clue me in on why it appears the entire male class of 2018 is throwing up a Sig Heil during their prom photos - that would be great.

It is so hard to find words...

This is why every single day we work hard to educate. We need to explain what is the danger of hateful ideology rising. Auschwitz with its gas chambers was at the very end of the long process of normalizing and accommodating hatred. https://t.co/13AzZaMGJR

“The District is investigating this situation and is working with parents, staff and local authorities," reads a message to parents Monday from Baraboo School District administrator Lori Mueller. "If the gesture is what it appears to be, the district will pursue any and all available and appropriate actions, including legal, to address the issue."

The Baraboo Police Department tweeted, "Officers are assisting the Baraboo School District with their investigation into this matter."

The school on Monday was placed on a "soft hold," according to district administrative assistant Angie Cowling, which required students to check in and out during the day. She said the measure was not because of a security concern, but "just because of the craziness of the social media posts."

"We had a lot of parents calling to let the kids out, so this was just a way to make sure that we had the permission for the kids to leave," she said.

Mueller's message said the photo was taken last spring. It calls the gestures the young men are making “extremely inappropriate." It says the district has confirmed that the photo “was not taken on school property or at a school-sponsored event.”

The message also says, “The Baraboo School District is a hate-free environment where all people, regardless of race, color, religion, creed, sex, sexual orientation, gender identity, national origin or ancestry, are respected and celebrated.”

According to Madison365, the photo was posted in an online album of prom photos by motorcycle photographer Peter Gust and has since been removed. It was posted on Twitter Sunday night by the account @GoBaraboo with the header, “We even got the black kid to throw it up #barabooproud.”

One student who appears to be African American is in the second row smiling. It’s unclear if his hand is raised.

The photo has drawn hundreds of outraged comments, some urging people to contact the school district and the high school principal.

“If anybody from Baraboo High School in Wisconsin can clue me in on why it appears the entire male class of 2018 is throwing up a Sig Heil during their prom photos - that would be great,” reads one comment.

Another comment pointed out that it was the class of 2019.

“due malevolent behavior on the part of some in society; this page has been modified. It is too bad that there are those in society who can and do take the time to be jerks; knowingly and willingly to be jerks! The internet can be a wonderful tool but for some there is an overwhelming urge to destroy. The destruction may not be physical but instead it can be bullying that is intellectual or emotional. To anyone that was hurt I sincerely apologize. To those who have harmed them, we as society often ignore them I have chosen not to do that. YOU ARE JERKS! Grow up! Be kind.”

Gust’s website says he’s a former educator with a son who’s a high school junior. It’s unclear if his son is in the photo.

Also Monday morning, the student who did not perform the salute in the photo identified himself as Jordan Blue and communicated with Suzdaltsev:

I spoke with the only student who is visibly not comfortable with the “salute”, he provided this statement. pic.twitter.com/HbNBc8xLOK

“The photo was taken during our Junior Prom Photos,” Blue wrote. “I clearly am uncomfortable with what was happening. I couldn’t leave the photo as it was taken within 5 seconds. The photographer took the photos telling us to make the sign, I knew what my morals were and it was not to salute something I firmly didn’t believe in.”

He goes on to write that the students in the photo have bullied him since middle school.

“I truly & firmly believe we need to make a change to this horrible act, it needs to stop,” he wrote.

“If this is true and this picture is accurate, this is not the values that we espouse as a school district and as a community,” he said. “We are very much against what we’re apparently seeing here.”

He said the board will likely discuss the matter at its meeting Monday night, but the conversation could be subject to a 24-hour requirement for posting public meeting notices.

“I don’t know what we can discuss,” he said.

He said legal considerations prevent him from discussing possible repercussions to the students.

“I won’t even begin to discuss that today until I have more information,” he said.

The photo is garnering political attention.

"As elected officials, we have a responsibility to lead by example for a generation growing up in a climate where they see this behavior condoned. I will be in contact with Barbaoo officials, but we must all be clear: intolerance and bigotry must never be tolerated, in our schools or anywhere else.”

"Unfortunately, based on what these students see coming from the White House, some of them may believe what they have done is acceptable," he said in a statement. "It is absolutely not. Leaders, from the President on down, need to condemn racism in all its forms and work toward a world where we learn from the mistakes of history.”

The image of about 50 boys, most with arms raised in an apparent Nazi salute, elicited blowback from across the world. One of the earliest criticisms came from the Auschwitz museum.

In the year since a photo surfaced that appeared to show some Baraboo students giving a Nazi salute, the community has come together to identify underlying challenges in the city.