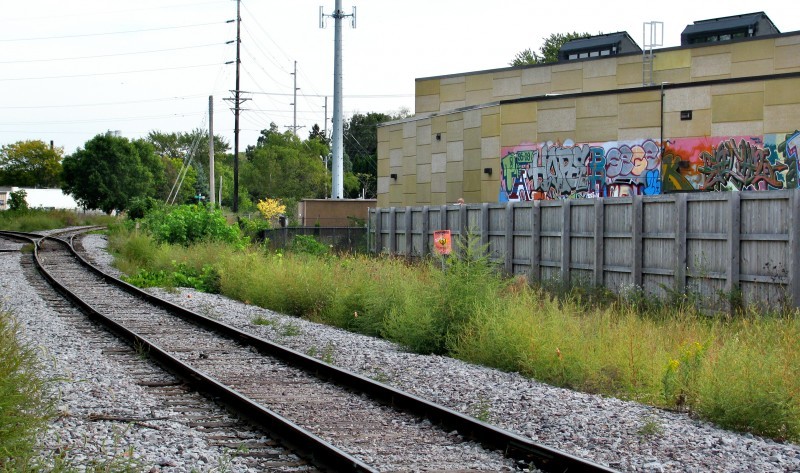 Goodman Community Center director Becky Steinhoff says fencing behind the center on Waubesa Street will need to be taller and more secure to keep children safe from high-speed trains. 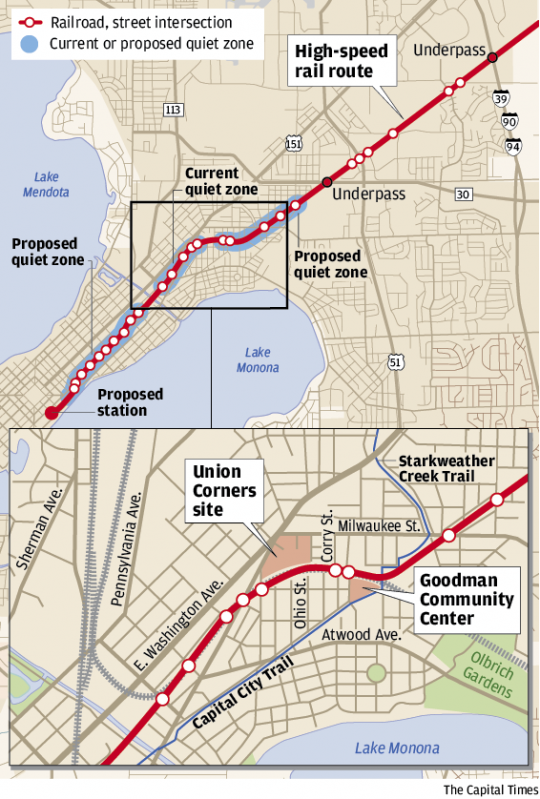 Goodman Community Center director Becky Steinhoff says fencing behind the center on Waubesa Street will need to be taller and more secure to keep children safe from high-speed trains.

When Ken and Maggie Fitzsimmons bought their house in the Atwood neighborhood in 2008, they were excited to move into one of the most accessible neighborhoods in Madison for walking, biking and buses. The couple live just a quick hop over the railroad tracks from the shops and restaurants on Atwood Avenue, and at the time, the mixed-use development project at nearby Union Corners had not stalled completely, so there was the prospect of even more walkable businesses setting up shop in the couple's backyard.

While the topic of high-speed rail had been talked about for the city and region, it was nowhere near the fever pitch discussion and planning that came after Barack Obama's election and the federal stimulus package that dropped $810 million into the laps of Wisconsin transportation planners earlier this year.

"We certainly noticed the railroad tracks, but we didn't have high-speed rail on our minds at all," Ken Fitzsimmons says. "Freight trains came by two or three times per day, but they come by really slowly. ... To be honest, the planes going by overhead are way louder than the trains."

Now, as city and state officials are scrambling to plan for the trains that will carry passengers between Madison and Milwaukee, many east-side residents along the rail line are growing anxious that their neighborhood's safety and friendliness for pedestrians and bicyclists may be compromised for the economic benefit of downtown, where plans call for a station to be built.

State Department of Transportation officials are working with neighborhood leaders and business people as part of a corridor management focus group, but the lack of concrete information from the department about any aspect of the rail line has left some doubtful that there will be enough time to use their advice in planning the corridor.

Ald. Marsha Rummel, who represents the neighborhood and serves on the focus group, says neighbors are eager to offer their input now because of the feeling that the DOT will have to start making some decisions and moving ahead quickly in future weeks.

"Once they kind of figure out what's possible, they're going to be on a hurry, hurry, hurry schedule. Now they're on a wait, wait, wait schedule," she says.

Overall, Rummel says, there likely will be some loss in connectivity in the neighborhood, particularly between East High School on East Washington Avenue and places like the Goodman Center on Waubesa Street. But, she adds, there may be some benefits to the neighborhood as well, such as the state's current commitment to upgrade all of the crossings along the rail line to a "quiet zone" standard. That would allow the city to petition to keep trains from using their horns, a frequent complaint of residents. Upgrading the tracks would also allow both the smaller passenger trains and larger freight trains to move more quietly within the city.

But, she adds, "I think there will be some things that will be upsetting, kind of on a personal level. Like maybe you've enjoyed your backyard in a certain way or there's a tree you've enjoyed looking at. Maybe it's not your right to use them, but you've just had it there and benefitted from it, and then it changes."

What is in the state's budget for fences and what they will look like in the historic east-side neighborhood is another concern for Rummel and others. Rummel says she hopes the fencing does not look like a barrier to neighbors and that, when appropriate, the state will look into more attractive options than a simple chain-link fence.

For Dan Melton, president of the Schenk-Atwood-Starkweather Creek-Yahara River Neighborhood Association and a member of the focus group, the costs of the project for his neighbors in terms of safety and connectivity have made many people "lukewarm" to the rail project overall.

In particular, he says, there are concerns about the fate of several pedestrian and bicycle crossings, both sanctioned and unofficial ones. Right now, he says, the railroad tracks are not considered a barrier for anyone, from "10-year-olds to 90-year-olds," to cross and the freight trains pose little danger. But high-speed rail is a different animal, and the probability for fencing all the way along the tracks is high.

While most streets will likely remain open, Melton says there is a heavily used pathway created by pedestrians to cross the railroad tracks between Farwell and Ohio streets that may be cut off, as well as an official bike crossing that connects the Starkweather Creek path to the Capital City Trail at Marquette Street.

"I think people were more concerned about getting to Walgreens than getting to Chicago," Melton says, referring to the East Washington Avenue drugstore location.

For Ken Fitzsimmons, the Ohio-Farwell crossing is a key one, as is one on Corry Street. If both are closed, he and his immediate neighbors will be "boxed in," with no access to the west side of the neighborhood except by going east to Milwaukee Street first.

"We're a two-person household with one car, so we definitely at almost all times are dedicated to some alternate transportation," he says.

Having to drive to Atwood businesses across the railroad tracks if walking became near-impossible, he says, would make him reconsider going there. "It just doesn't seem very environmentally conscious."

And on the flip side, Fitzsimmons says, when something gets accomplished at Union Corners, he hopes there are enough crossings to make those businesses accessible for pedestrians and bicyclists. Without that extra business from the Atwood neighborhood, he says, it may be difficult for mixed-use businesses to thrive and East Washington Avenue may instead see another of the "cash-advance store" type of shopping centers that Union Corners was intended to stave off.

"That's exactly the opposite of what the neighborhood wants," he says. "It basically makes Union Corners yet another shopping location mainly accessible by car. That certainly isn't in line with being a bike-friendly city and with being a neighborhood- and community-supported development."

Farther east, Worthington Park neighborhood President Dace Zeps says the Starkweather Creek trail connection, which cost the city millions to build, is particularly important because it connects her neighborhood across East Washington Avenue and the railroad tracks. Since its installation, she says biking has increased dramatically in her neighborhood, as has the feeling of being welcome in neighborhoods like Atwood rather than "sneaking in" across the tracks.

As for pedestrians, she says there are a few crossings in her neighborhood like Powers Avenue that she hopes can be preserved, particularly because of the large distance between other major crossings like those at Milwaukee Street and Fair Oaks Avenue.

If the state does not install enough crossings for pedestrians, Zeps says she fears that people, particularly teens, will climb a chain-link fence, cross the tracks illegally, and risk being hit.

Goodman Community Center director Becky Steinhoff says children and teens already climb over the wooden fence that the center installed to protect them from the freight trains. With high-speed rail, she hopes the DOT installs an even taller, more secure fence to prevent that kind of crossing. The center is accessible currently via Waubesa Street, although the outdoor skate park area makes entering by other means attractive to kids.

DOT division operations manager Paul Trombino, who serves on the corridor management focus group with Zeps, Rummel and Melton, says he understands the concerns of many neighbors. It's important to keep the planning open-ended right now, he says, in order to learn how people who live in the area cross the tracks. At the focus group's Oct. 21 meeting, he says DOT officials will discuss each crossing along the railroad tracks and their preliminary recommendations for whether or not it would be preserved.

Neighborhood and business representatives will be able to provide feedback on those recommendations at the meeting. While not everyone's favorite crossing may be preserved in the final corridor management plan, Trombino says having the neighborhood participate is important to ensure that many pathways across the tracks are still available and that when they're not, the neighborhood understands the tradeoffs that were made.

"Is there a limit?" he asks. "In the end, there is a safety mechanism we have to make sure we deal with."

While ideally all of the crossings would be preserved, Melton says some neighbors would be happy simply with a clear answer one way or the other about them.

"I don't want a lot of hand-holding," he says. "I'd rather get a blunt, honest answer. I don't think it's quite that blunt yet."

As for Fitzsimmons, he jokes that he and wife "aren't becoming Republicans" because of the high-speed rail line - referring to Republican gubernatorial candidate Scott Walker's pledge to stop it from happening. But he adds that he hopes DOT representatives can take neighborhood advice like they say they will and that the decisions do not all come from the Federal Railroad Administration in Washington, D.C.

"The train is coming through as far as we're concerned," he says. "We're not putting in any effort to stop it because it could be a really good thing ... I think the important point I was getting at is if they're really receptive to some of these ideas, we've got ideas. We're not trying to stop this train, we're just trying to limit its possible damaging effects."

Is Monona Terrace the best spot for depot?

The passenger rail depot is downtown bound, but some critics are still pushing for a different site.