At 6 feet tall and 195 pounds, Tony Megna was considered too small to be a college football linebacker. Megna was determined, though, to play for the University of Wisconsin-Madison squad.

As a walk-on in 2007, Megna said, he was expected to work harder than his peers on the field and at practice. His attitude was, “You’re playing NCAA football. You’re a warrior.”

Megna said he knew he was putting his body on the line for the game but, “I wasn’t aware of brain injury.”

Disturbed by what he has learned since his football career ended, Megna is now planning legal action. He intends to join a group of former college football players who have filed 111 lawsuits to date seeking to create a class action against the NCAA and its athletic conferences.

His attorney, Jeff Raizner of Houston, said there is a “high likelihood” Megna will be a plaintiff in the case, which is months, if not years, away from trial. If filed, Megna’s claim could become the first to pull UW-Madison into the litigation.

The suits, which were moved to the U.S. District Court for the Northern District of Illinois in 2016, are seeking compensation for medical bills, lost income and reduced future earnings related to brain injuries from playing college football. According to the lawsuits, the NCAA has known about the dangers of brain injuries for more than 80 years.

Megna estimates he racked up between $15,000 and $20,000 in medical expenses over the past eight years related to head injuries.

The NCAA has filed motions to dismiss the claims on the grounds that the former players have not brought forth “a claim upon which relief can be granted.” The NCAA also argues that the statute of limitations has run out — an argument the plaintiffs’ attorneys dispute.

The association declined to respond to questions for this story. The UW Athletic Department also declined to comment.

‘I couldn’t do it anymore’

Megna said that he began suffering severe, chronic headaches in the off-season before his junior year, forcing him to miss most of the 2009 season. The Oak Creek native then turned to medical staff, neurologists and doctors specializing in headaches.

Megna said he found few answers about the cause of the headaches that swept over him up to 30 times a day.

Instead, he was given medication to reduce inflammation and mask the pain. It never did. Megna said he was never told he might need to step away from the sport.

That decision came from Megna. He left the team before his junior year but returned at the team’s request as a backup to Chris Borland, who just six years later walked away from a multimillion-dollar contract with the San Francisco 49ers over concerns about head injuries. Borland now is a national figure in a campaign to raise awareness about sports-related brain injuries.

“It was getting to the point,” Megna said, “where I couldn’t get through practice without throwing up. I couldn’t concentrate in school. I almost flunked out a semester because of poor concentration, couldn’t remember things, short-term memory loss. It was very much a decision of I couldn’t do it anymore.”

“I mean, he hit every day in practice like everybody else,” Mark Megna recalled. “It was gut-wrenching to watch. I mean he literally almost died playing.”

Earlier this year, the NCAA’s major conferences approved a program that guarantees medical treatment for athletic injuries for at least two years after the athlete leaves the sport.

Philadelphia attorney Sol Weiss, the co-lead counsel for the former players, said the NCAA needs to get more serious about current and former athletes’ safety.

“For decades, the NCAA has failed to protect and educate those in its care on the risks associated with college football,” Weiss said in an interview.

But according to Joshua Gordon, an instructor in sports business and law at the University of Oregon, the lawsuits are unlikely to bring about a “systemic, tide change” for the NCAA. Gordon said rather than a sweeping class action, he expects to see individual settlements and narrow, case-specific rulings.

According to Gordon, the bigger impact may be on public opinion.

“There’s an overall theme developing that the NCAA doesn’t care about student athletes and that the NCAA is not about academic missions or any of that,” he said.

There are currently 111 lawsuits filed against the NCAA, each covering one or more former players alleging brain injuries from playing football. The claims were brought by those who played football as far back as 1952. The plaintiffs are demanding medical care to cover former athletes for symptoms that persist or develop years later, lost earnings and other damages.

Four cases have been chosen to represent other plaintiffs so District Judge John Lee can determine if the court will certify the class and what restrictions to place on it. Raizner said Megna’s case would likely move forward after the four sample cases have been litigated.

The four sample cases and possible class certification will be ruled on in 2019 or 2020, based on the court’s scheduling order. They are:

— Eric Weston, who was a defensive end at Weber State in Utah from 1996 to 1997. He sometimes could not remember the games he had just played.

— Jamie Richardson, a wide receiver at the University of Florida from 1994 to 1996. He said he was put back into games despite being concussed.

— Michael Rose and Timothy Stratton, who played for Purdue University in the late 1990s. Rose, a linebacker, suffers from ailments including uncontrollable mood swings. Stratton, a tight end, claims he is plagued by anxiety, anger and depression.

— Zack Langston, a linebacker at Pittsburg State University in Kansas from 2007 to 2010. Wracked by paranoia, memory loss and stress, in 2014, Langston shot himself in the chest. He wanted his brain to be preserved for research. An autopsy determined he had been suffering from chronic traumatic encephalopathy, the degenerative neurological brain disease which has been linked to repeated blows to the head.

When he left the team and left the sport, Megna lost the medical care he received as a student athlete. As the symptoms persisted, Megna sought out medical advice on his own.

He said he suffered from major periods of depression, bouts of anxiety and suicidal thoughts — all symptoms associated with trauma and potentially CTE. The disease has been shown to induce symptoms that range from mild, such as impaired judgment and mood swings, to aggressive, such as increased risk of suicide, Parkinson’s and dementia.

Megna said he still suffers from occasional headaches, but they are not as severe as they once were.

“Research suggests that I will have dementia by the time I am 40 or 50,” said Megna, now 29. “So that is the risk of playing competitive football. So I guess that has become my life work — to make sure that does not happen.”

In his journey to find answers about his own health problems, he turned to nontraditional medicine, including acupuncture. Due to the fact he “wasn’t getting hit in the head while trying to learn,” Megna was able to graduate from the Midwest College of Oriental Medicine in Racine with a master’s degree in traditional East Asian medicine. He owns Integrated Heights Wellness and Healing Center in Mount Pleasant.

The season after Megna left the Badgers team, the NCAA instituted the Concussion Management Plan, requiring every school to have a protocol in place to help prevent and treat head trauma.

The NCAA requires players to sign waivers at the beginning of each season after receiving the mandated concussion education, agreeing to report any concussion-related symptoms.

The litigation that Megna plans to join is a follow-up to a 2013 class action lawsuit brought by current and former athletes that resulted in a settlement mandating that the NCAA set up a $70 million medical monitoring program for college athletes plus $5 million for concussion research.

The program does not include treatment.

Megna knows what it takes to be successful at football. It is also what makes the sport so dangerous.

Can football — a multi-billion dollar sport which millions of Americans have come to love — coexist with player safety?

According to Mark Megna: Probably not.

“Because that is the game.”

Luke Schaetzel, a recent University of Wisconsin-Madison journalism graduate, is a freelance reporter based in Madison. Wisconsin Center for Investigative Journalism Managing Editor Dee J. Hall contributed to this report. The nonprofit Center (www.WisconsinWatch.org) collaborates with Wisconsin Public Radio, Wisconsin Public Television, other news media and the UW-Madison School of Journalism and Mass Communication. All works created, published, posted or disseminated by the Center do not necessarily reflect the views or opinions of UW-Madison or any of its affiliates. The Center's collaborations with journalism students are funded in part by the Ira and Ineva Reilly Baldwin Wisconsin Idea Endowment at UW-Madison.

A Wisconsin mother whose son took his own life after developing CTE sees no value in youth tackle football: ‘What kind of a future is their kid going to have with brain damage?’

University of Wisconsin-Madison study is testing whether explicit warnings about dementia, other problems increase athletes’ willingness to report concussions.

The future of football: How concerns about head injuries are changing youth sports in Madison

Research on the long-term neurological consequences of playing football is relatively new, and the unknowns are considerable. Still, the body of research that does exist, along with a heightened national focus on the dangers of concussions, is sparking conversations about the future of football — not only for adults, but for the millions of children playing around the United States. 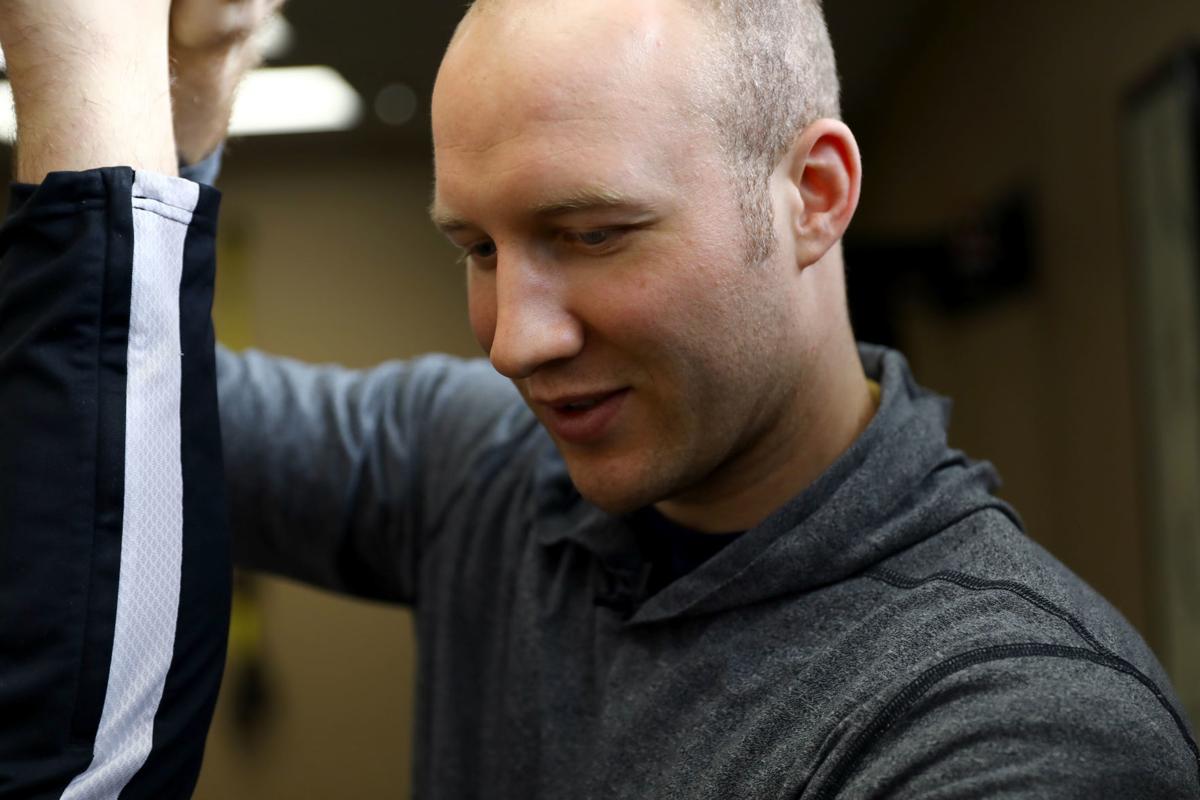 While playing, former University of Wisconsin linebacker Tony Megna suffered from up to 30 painful headaches a day. Now he runs Integrated Heights Wellness and Healing Center in Mount Pleasant, Wis., which focuses on a combination of traditional and non-traditional medical practices including fitness and injury recovery body work. Here Megna demonstrates his techniques on Connor Flannery, a semi-pro football player with the Racine Raiders. 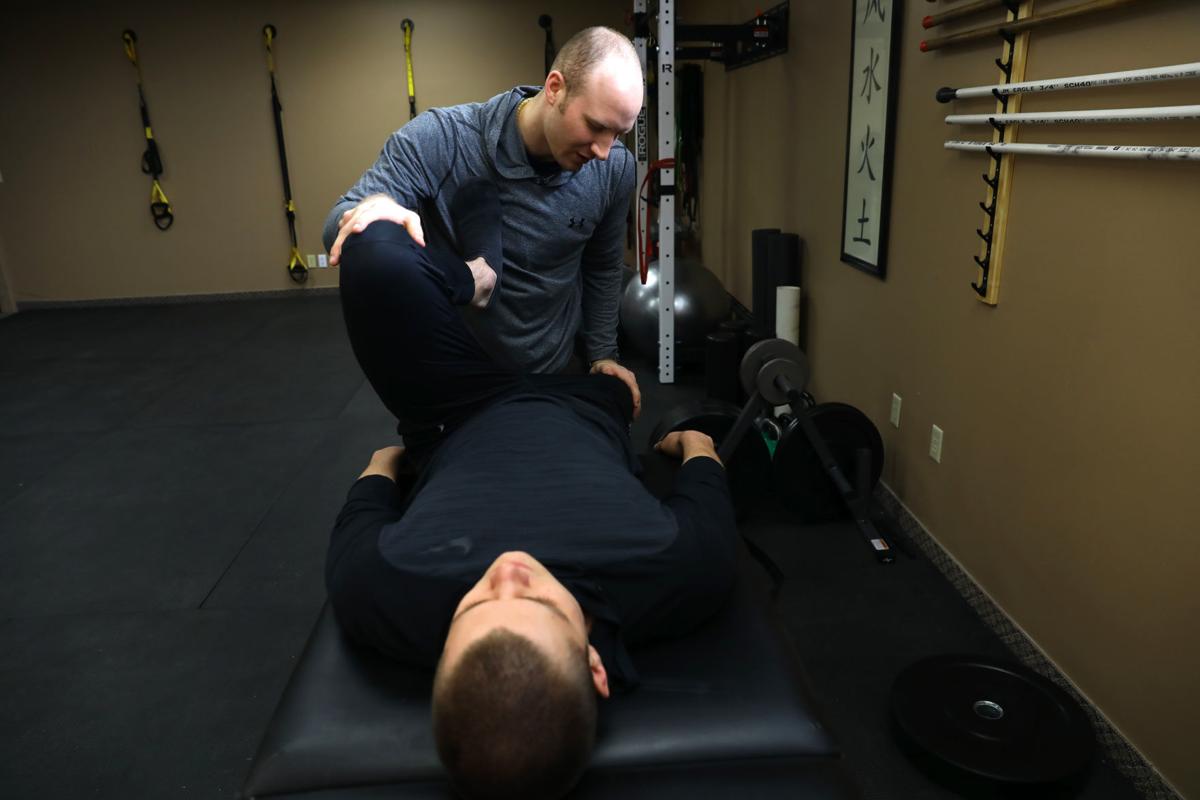 While he was playing, then-University of Wisconsin linebacker Tony Megna suffered up to 30 painful headaches a day. Now he runs Integrated Heights Wellness and Healing Center in Mount Pleasant, Wis., which focuses on traditional and non-traditional medical practices including forceful stretches. Here he demonstrates his techniques on Connor Flannery, a semi-pro football player with the Racine Raiders. 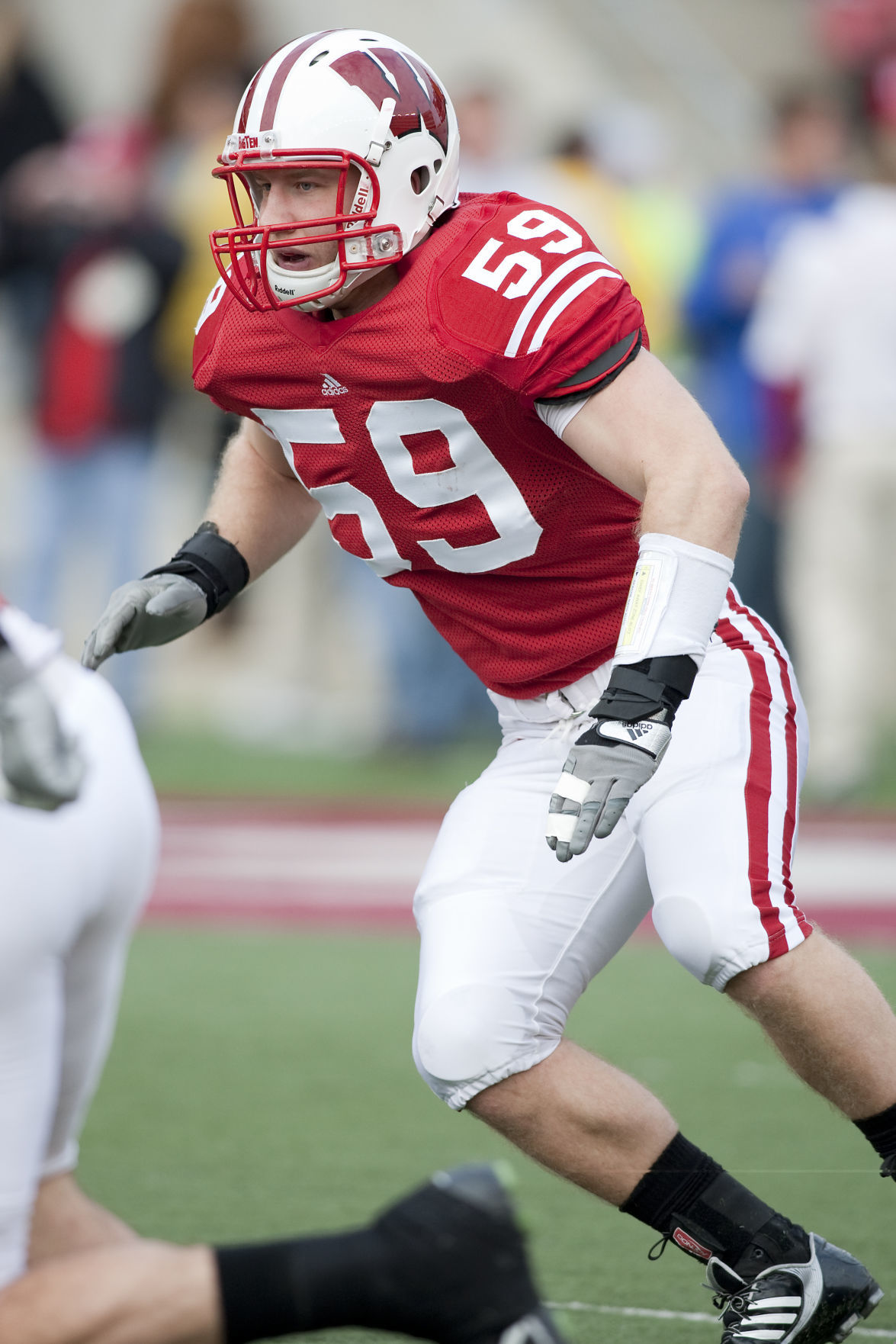 Wisconsin Badgers linebacker Tony Megna warms up before a game against the Michigan Wolverines at Camp Randall Stadium on Nov. 14, 2009 in Madison, Wis. Megna left the game of football later that season after suffering debilitating headaches.