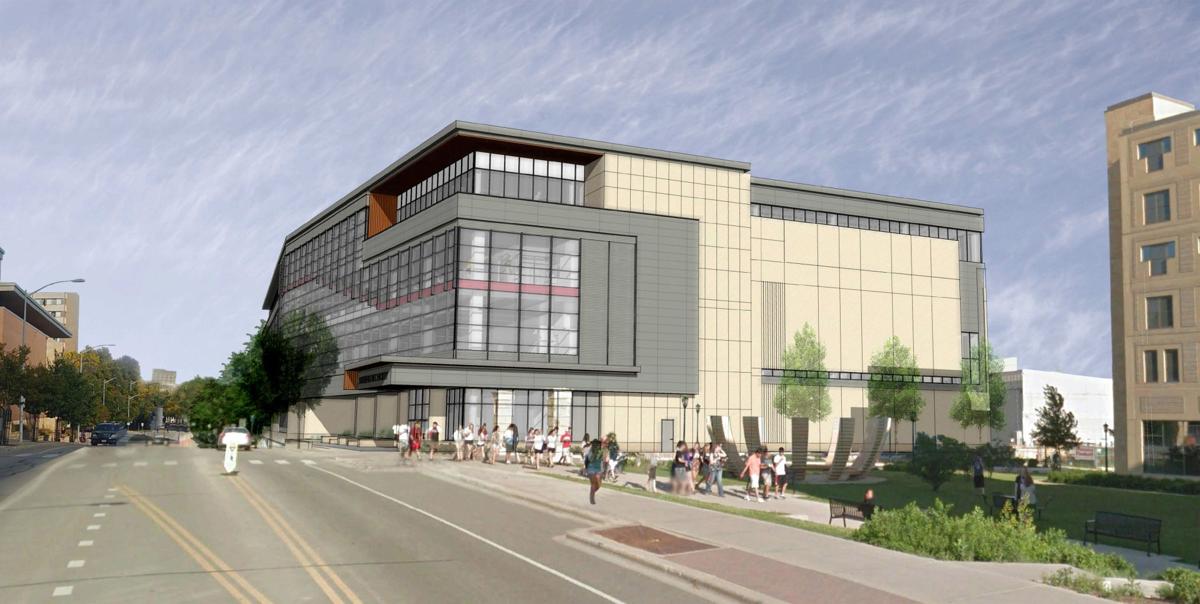 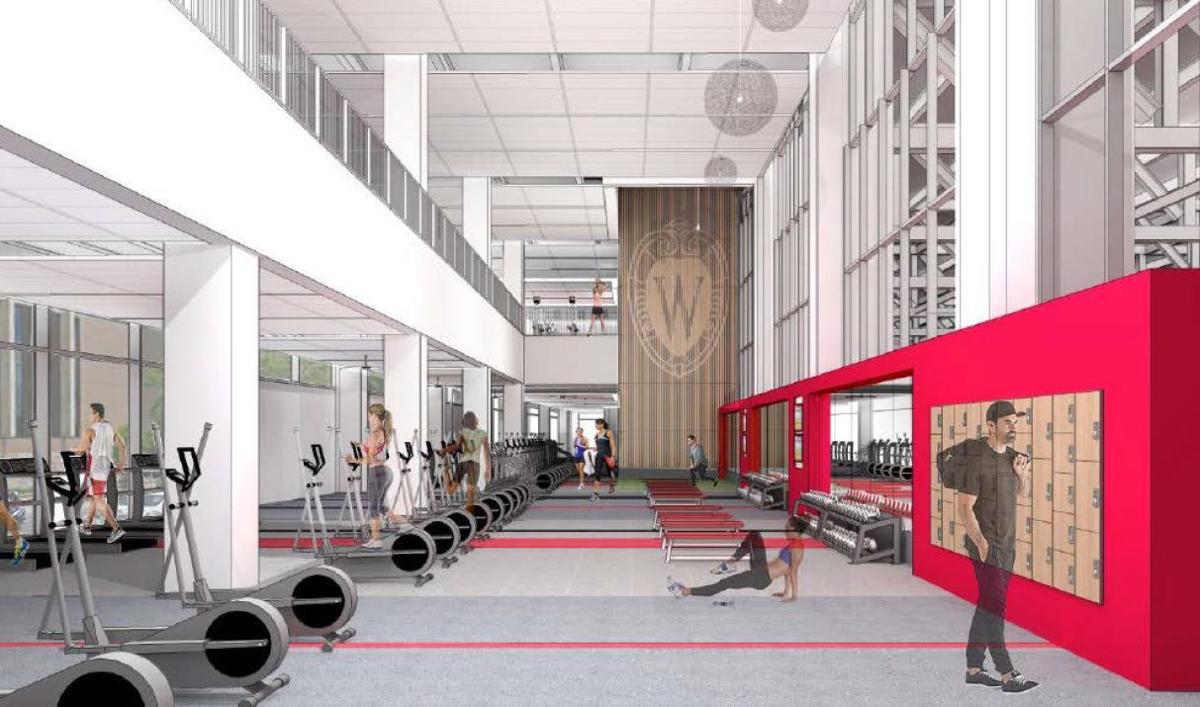 A rendering of a fitness room in the proposed new Southeast Recreation Facility.

University of Wisconsin-Madison students want more space to work out at a gym with natural light that is easy to navigate, said junior Emily Ott.

Currently at the Southeast Recreation Facility, commonly known as the SERF, students have to wait at peak use times to use equipment.

“Comparing to other collegiate rec facilities across the nation, students know that they not only want, but need and deserve much more fitness space than they currently have,” Ott said.

Ott served on a design team for the facility, is vice chair of a recreational sports student council and was part of a student group that advocated for facilities improvements.

Campus officials hope to give the students what they want in a $93 million project to raze and rebuild the SERF on its current site at 715 W. Dayton St. The plan calls for quadrupling the fitness space to 35,000 square feet, doubling the number of basketball courts to eight and quintupling the number of studios for fitness classes to five. The new building also will have a swimming pool that meets requirements for tournament competition.

Plans are to close the SERF this coming summer and demolish it in the fall for construction slated for completion in fall 2019, said John Horn, director of UW-Madison Recreational Sports. First, though, the building plan needs approval from the state and the city of Madison.

UW-Madison will not be asking for any money from the state for the project. The costs will be covered by some $50 million in student fees, $16 million from the UW-Madison athletic departs, and the rest in gifts and grants, Horn said.

UW-Madison students in 2014 voted to quadruple recreational sports fees for five years to raise money for a $223 million project covering improvement of the SERF; upgrading the Near West intramural fields; razing and rebuilding the Natatorium, an indoor sports facility with a pool at 2000 Observatory Dr.; and upgrading the Near East Fields.

The first project slated, upgrading the intramural athletic fields, was not completed in 2016 as scheduled, due to heavy rains in August and September, Horn said. It is slated for completion in the spring.

Members of the Madison and UW-Madison communities can learn about the SERF plan at an open house to be held at 7 p.m. Jan. 19 at Gordon Commons, 770 W. Dayton St.

The building will occupy the same footprint of the current SERF, but Ald. Mike Verveer said he asked for the open house, largely because of the plan to raze and rebuild instead of remodel the building.

“The UW has pivoted from remodeling to a complete replacement,” Verveer said. He said UW officials told him that a cost-benefit analysis found that there were so many deficiencies in the 1983 building that a replacement made more sense.

Horn said the decision to remodel came when the UW athletic department decided to pitch in $13 million towards a new pool that, unlike the current pool, would be eligible for hosting competitive meets. That nearly doubled the department’s original planned donation to the project, which had been criticized by the graduate student teaching assistant union as “measly.”

Currently causing consternation among students is the question of where they will work out when the SERF is out of service. “There’s no question that users over the next couple of years are going to feel some pain,” said Horn.

Most of the fitness equipment now at SERF will be moved to the adjacent Ogg Residence Hall for use there during construction, Horn said. Options will be expanded at the Shell, 715 W. Dayton St., which will host intramural sports for the duration. Equipment also will expanded at the Natatorium, 2000 Observatory Dr.

“The alternative options do not replace the entire facility,” Horn said. “Some pain will be felt by all."

Ott said that students are concerned about fitness options during the SERF reconstruction. She said, though, that their view of the situation gets more positive after they hear the plan.

“With extended hours and adjusted layouts to account for increased equipment at other Rec Sports facilities, as well Ogg Hall’s main lounge housing 60 percent of the SERF’s current fitness equipment, students understand that while the few years without the SERF will be a challenge, Rec Sports is doing everything they can to accommodate members. The end result of a brand new facility is worth the wait.”

Research has shown that exercise and fitness improves classroom performance and provides an alternative to high-risk behaviors, Horn said.

Make 'shroom in your schedule for 'Fantastic Fungi' documentary

Sallie Helmer: Nothing can help Democrats