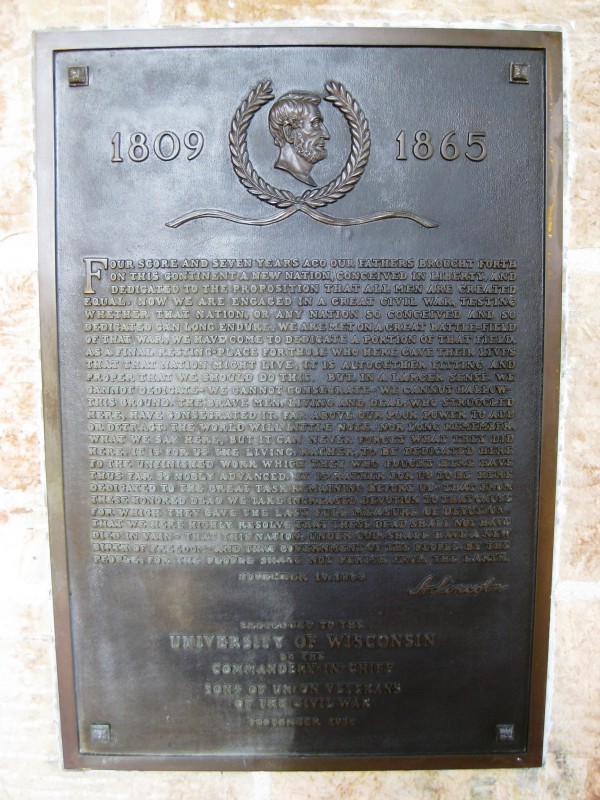 The Gettysburg Address is seen here at the beginning stages of cleaning on Bascom Hill. 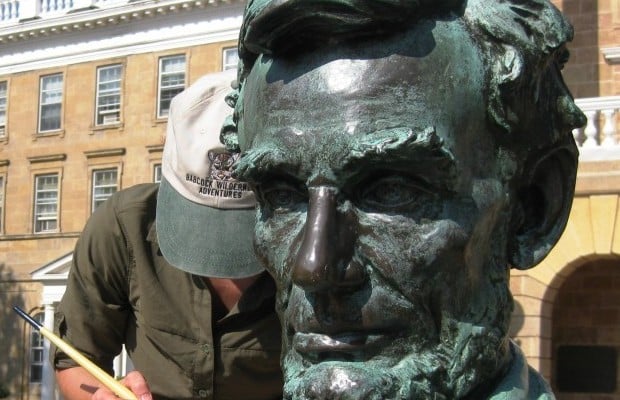 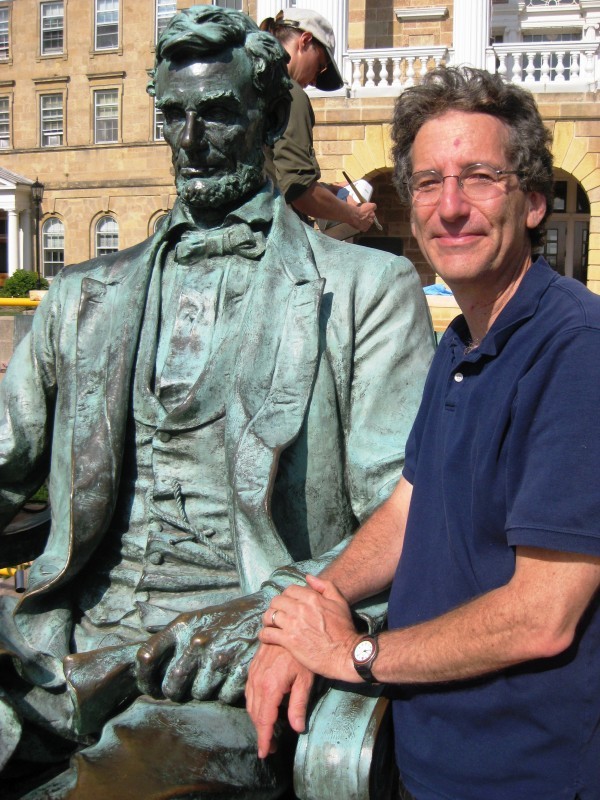 Over the years, the statue of Abraham Lincoln at the top of Bascom Hill has been painted red for a student protest of McCarthyism, surrounded with plastic pink flamingos and sat on by countless graduates asking for good luck.

Likely one of the most recognizable features of the University of Wisconsin-Madison campus, the bronzed statue peers east toward the state Capitol. When unveiled at commencement on June 22, 1909, according to a Wisconsin Historical Society write-up, the president of the Board of Regents called the statue "a sign to all future generations of the high ideals of American citizenship." President Charles Van Hise apparently imagined thousands of future students silently absorbing the great man's virtues as they walked past.

Students likely took things a bit less seriously. The Historical Society points out that the Daily Cardinal joked in 1944 that the statue did reflect upon campus morals: Lincoln stood up every time a virgin walked by. The quip was repeated for decades.

Many on campus last week stopped to take a closer-than-usual look at Old Abe as Milwaukee art conservator Cricket Harbeck - standing on an elaborate set of scaffolding - was using a power washer, propane torch, wax and a series of hand brushes to help preserve the iconic campus figure. Giving the statue its first detailed cleaning in a decade, Harbeck says she found some signs of mischief: "There are some little spots where it looks like some graffiti was scratched in him. But overall, it looks like people have been respectful."

The cleaning and preservation coincides with the bicentennial of Lincoln's birth (Feb. 12, 1809) and the 100-year anniversary of the placement of the statue on Bascom Hill.

"When people think of Bascom Hill, they think of the Lincoln statue," says Daniel Einstein, program manager with UW-Madison's physical plant and the unofficial campus historian on all things related to the statue. "It's really one of the focal points of the campus."

Which is somewhat strange, considering Lincoln was born in Kentucky, moved to Indiana at the age of 7 and to Illinois at 21. He came to Wisconsin as an officer in the Illinois Militia during the Black Hawk War in 1832, and made a handful of speeches in the state in the fall of 1859. "But any direct connection of Lincoln to Wisconsin is pretty minimal," acknowledges Einstein.

And yet, Madison is the only place to house a replica of Adolph A. Weinman's original statue, which was erected in Lincoln's hometown of Hodgenville, Ky. Neither is a copy of the Lincoln Memorial in Washington, D.C.

About 10 years ago, Einstein started looking into how Madison landed the statue when he was put in charge of overseeing the first detailed cleaning and preservation of the Lincoln statue in its 90 years on Bascom.

Some have suggested the homage is due to Lincoln's signing of the Morrill Act of 1862, which in essence conferred land grant university status to UW-Madison. This legislation allowed public universities to buy land cheaply, spurring rapid growth at UW-Madison and similiar institutions.

"To a great degree, the University of Wisconsin owes the profile it has today to Abraham Lincoln signing the Morrill Act," says Jim Hoyt, a retired UW-Madison journalism professor who is a member of the state's Lincoln Bicentennial Commission, which is charged with raising awareness of President Lincoln throughout the state.

Others point to Madison's Camp Randall, which trained some 71,000 state residents to fight for the Union in the Civil War. And still others say it was simply a general infatuation many had - and continue to have - with a man who is considered one of the country's best presidents.

But Einstein believes none of this has much to do with why Abe has been sitting stone-faced atop Bascom Hill for the past century.

"Madison got the Lincoln statue because we had Richard Lloyd Jones," says Einstein.

Jones was born in Janesville in 1873, grew up in Chicago and attended the University of Wisconsin from 1893 to 1894, according to the online archives of the Wisconsin Historical Society. A decade later, he was an associate editor for Collier's Weekly (1903-1911) in New York City.

In 1905 he and his employer, Robert Collier, purchased the farm on which Lincoln was born near Hodgenville, Ky. Jones then organized the Lincoln Farm Association, which enrolled an estimated 400,000 members, collected some $400,000 and established a historical site, which included the restored cabin in which Lincoln was born.

The Kentucky Legislature, seeking to capitalize on the popularity of Lincoln, eventually paid to have a statue of the 16th president - cast in bronze and sculpted over a two-year period by Weinman of New York - dedicated in the town square of Hodgenville on May 31, 1909.

According to a Wisconsin Alumni Magazine article in 1909, Kentucky leaders then decided to allow one replica of the statue to be made. Requests poured in from across the country, with the state of Nebraska willing to pay a reported $25,000 to place the statue in Lincoln, Neb.

But Jones - who helped commission Weinman to produce the original - used his political power, a $6,500 gift from UW-Madison benefactor Thomas E. Brittingham and another $1,500 from the university to land the Lincoln statue replica, which was unveiled in Madison in 1909.

The statue sat between North and South halls on Bascom Hill for 10 years before being moved about 100 feet up the hill in 1919 to its current location. At that time, the university held a special program on June 24 to celebrate the dedication of the "Lincoln Terrace" and to pay tribute to soldiers returning from World War I. The statue sits upon a granite pedestal that is 6 feet, 6 inches tall, with the total height of the statue and pedestal topping out at 13 feet, 6 inches. And while Brittingham and the university paid for the statue, the state paid for the exedra, or semicircular bench, which still surrounds the statue.

"The statue is here because Richard Lloyd Jones went to school here, and knew a rich and influential person in this city in Brittingham who could bring to bear the funds necessary," says Einstein. "Yes, this is a wonderful sculpture, and Lincoln was obviously one of our greatest presidents. But this story really is all about Richard Lloyd Jones."

Not only was Jones the key mover and shaker in bringing the Lincoln statue to Madison, but he also played a role in the birth of The Capital Times.

Jones purchased the Wisconsin State Journal in 1911 and moved back to Madison to become the newspaper's editor and publisher, according to the Wisconsin Historical Society archives. At first, Jones was a fan of legendary Wisconsin politician Robert "Fighting Bob" La Follette, and he helped promote progressive causes in his newspaper.

Jones then brought in William T. Evjue to be one of his editors. But after six years, the two clashed - Evjue supported La Follette's opposition to American involvement in World War I; Jones ripped La Follette for his stance. That led to Evjue leaving the State Journal in 1917 to start The Capital Times.

In 1919, Jones sold the State Journal to the Lee Newspaper Syndicate and bought the Tulsa (Okla.) Democrat, which he later renamed the Tulsa Tribune. After moving his family to Oklahoma, he had a house built for him by a cousin, famed architect and Richland Center native Frank Lloyd Wright.

But Einstein says Jones' reputation took a hit in the years to come.

He penned an editorial that, according to the Dictionary of Unitarian and Universalist Biography, was thought to have helped "incite the 1921 Tulsa Race Riot, an act of violence directed against blacks, unparalleled in American history." And in a 1952 column titled "The Lone Eagle of the Senate," Jones praised Joseph McCarthy for rooting out Communism and attacked Paul Douglas' opposition to McCarthy's tactics.

The recently completed cleaning and preservation work of the Lincoln statue was done in preparation for a commemorative program slated for noon on Wednesday, Sept. 16. Sponsored by the Lincoln Bicentennial Commission, the event will feature comments from UW-Madison Chancellor Biddy Martin and music from the 1st Brigade Band, a re-creation of a Wisconsin band that marched with Gen. William T. Sherman during the Civil War.

"It's just an attempt by us to raise the profile of the Lincoln statue for the students," says Hoyt, who teamed with UW Law School alum and Madison attorney John Skilton to cover the cost of the preservation work. "We just want to sensitize students to some of those links between Lincoln and the university."

Adds Skilton: "As bad as the times are today, they pale in terms of what they were from 1861 through 1865. Lincoln brought to the table a fundamental honesty, a kindness of understanding. He was a remarkable man who was given the reins of this country at the moment of its peril, and he came through with good leadership."

The last time significant cleaning and preservation work was done on the Lincoln statue in 1999, workers found a wasps' nest under Abe's armpit. That job was done by Cameron Wilson, a nationally known art conservator from Brooklyn, N.Y., for a reported $9,400. Since it has only been 10 years - and not another 90 - between cleanings, Harbeck has not found as much debris this time around. Last week's cleaning, which Einstein says cost about $2,500, was mostly to get rid of surface deposits from air pollutants, grit and bird droppings. Harbeck then used a series of wax treatments to help protect her work.

Harbeck also cleaned and preserved plaques on both sides of the main Bascom Hall entrance - one bearing the Gettysburg Address and another commemorating the famous "sifting and winnowing" quote.

She says Abe is in pretty good shape for a 100-year-old, with no major damage. "You have your standard urban environment corrosion - which is that green and black streaking," she says. "But I don't see any significant corrosion damage."

The Gettysburg Address is seen here at the beginning stages of cleaning on Bascom Hill.