Just over a week after a gathering of white supremacy groups in Charlottesville, Virginia, left three dead and led to the quick removal of Confederate memorials across the country, University of Wisconsin-Madison Chancellor Rebecca Blank announced Monday she has formed a committee to examine the history of student groups affiliated with the Ku Klux Klan.

In the 1924 edition of the Badger yearbook, a student organization called the Ku Klux Klan's roster included actor Fredric March (then Fred Bickel) and longtime Memorial Union director Porter Butts, who are memorialized today with the Fredric March Play Circle and Porter Butts Gallery at the Union. Other members of UW's KKK included Thomas E. Brittingham Jr., who would become a financier and co-founder of the Wisconsin Alumni Research Foundation, the patent and licensing organization of UW-Madison; and Philip Falk, later a long-time Madison schools superintendent.

Stories of the group’s existence in the early 1920s have cropped up from time to time in the intervening decades, stirring controversy over whether it was affiliated with the notorious white-sheeted Invisible Empire of the Ku Klux Klan out of Georgia.

"In the wake of the tragedy in Charlottesville, it is time to take a fresh look at our history to ensure that we fully understand and appropriately acknowledge the activities of members of the campus community during this time period," Blank said a statement Monday. "To that end, I am asking an ad-hoc study group to research the history of these student organizations, including the extent to which they were affiliated with the national KKK movement, their actions and legacies. "

The group will be co-chaired by history professor Stephen Kantrowitz, who has been involved in the Justified Anger Coalition's African-American history courses, and Floyd Rose, president of 100 Black Men of Madison. In the statement, Blank said she will ask the group to advise "how best the campus can acknowledge and respond to this history" by Dec. 1.

"In addition, I am asking the leadership of the Wisconsin Union to begin to identify space within the renovated Memorial Union building that could be used to document the history of these student ogranizations on campus, using the knowledge produced by this study group," Blank said.

As a UW-Madison graduate student, Timothy Messer-Kruse wrote in a 1993 article published by the State Historical Society of Wisconsin that he could find no evidence of a direct link between the KKK at UW-Madison and the Invisible Empire, but found the organization shared “many of the racist and nativist attitudes of the other, more dangerous Ku Klux Klan.”

The story of the UW campus Klan is historically instructive, “because it serves well as a barometer of the cultural and ideological climate of Madison and the university campus in the 1920s,” Messer-Kruse wrote for the Wisconsin Magazine of History. He is now a professor at Bowling Green State University in Ohio.

The UW KKK was founded and quickly became prominent at a time when the Invisible Empire was organizing in many cities, including Madison, where it had considerable if brief success.

The campus Klan was an interfraternity honorary society, an all-white, all-male group officially chartered in January, 1920, and made up of the most accomplished representatives from campus fraternities.

Members of the campus Klan “served in or on the student senate, student court, alumni committee, prom and homecoming committees and were directors of the Daily Cardinal board of control, athletic board, the YMCA cabinet, Student Union board, and Memorial Union fund-raising committee,” local historian Stuart Levitan wrote in “Madison: The Illustrated Sesquicentennial History, Volume 1,” published in 2006.

Levitan posted an image from his book last week on Facebook, noting the Memorial Union facilities named for members of the group. But Levitan said he is not suggesting the names of the facilities be changed.

“The rooms were named in their honor for what they did as grown men, not for who they were as students," he said. "I believe in growth and redemption."

In his book, Levitan noted that the "honorary" Klan was diminished when the "authentic" Klan began recruiting on campus in 1922. While the former was made up primarily of out-of-state liberal arts majors, the latter recruited engineering majors from Wisconsin.

"The members of the honorary Klan didn't so much object to the philosophy or activities of the new group as disdain them on a class basis," Levitan wrote.

While the UW campus Klan may not have been affiliated with the national Klan, its members likely knew of the growing national group and the associations the name insinuated, Messer-Kruse argued.

The Invisible Empire of the Ku Klux Klan was formed in Georgia in 1915, the year of the premier of D.W. Griffith’s popular film “The Birth of a Nation,” which synthesized a number of racist and nationalistic stereotypes in depicting the heroic riders of the Ku Klux Klan saving the South, white womanhood and the nation.

“By adopting the name Ku Klux Klan in such a climate, students draped themselves in the flag,” Messer-Kruse wrote. Approval of a group calling itself the Ku Klux Klan raised “not a ripple of concern” on campus, he said. Yet there is evidence of broad familiarity with Klan imagery from the earliest days of the honorary society. A Daily Cardinal item on an October 1919 meeting of the group wondered wryly what the members wore: “D’ya spose that they attend in sheet with eyes cut out…Masquerades ought to be easy for that crowd.”

Hinted associations between the groups raised no concern at the time, as a culture of intolerance permeated the UW campus, the Madison community and white America generally, Messer-Kruse wrote.

For example, the 1920 homecoming celebration included a “regular old-fashioned n----- Jubilee,” according to a souvenir program, featuring white performers smeared in burnt cork. The honorary Klan played a central role in producing the program, according to Messer-Kruse.

There were almost no African-American students enrolled at UW at the time; three in the freshman class of 1923 and a total of six enrolled in 1927. There were at least 550 Jewish students on campus in 1926, although they were shut out of many campus activities. For example, fraternities at UW, like many others across the country, restricted membership to males who were white or “not Semitic.”

The charters of fraternities at UW were approved by the dean of students and student senate, which was dominated by the honorary Ku Klux Klan, according to Messer-Kruse.

The issue of the UW KKK was raised in December 1953 during anti-Communist hearings convened by Sen. Joseph McCarthy of Wisconsin. The Capital Times reproduced the Ku Klux Klan's 1924 yearbook page under the headline “U.W. Had Ku Klux Klan in 1920s!” The story noted that Madison superintendent Philip Falk and UW athletic director Guy Sundt had been members.

“But Don’t Get Too Excited, Because It Was Just In Fun,” read the headline of an accompanying story that explained that while such news could be damaging “in these days of fear and guilt by association,” the campus Klan existed to volunteer for campus projects. The reason the group took the name KKK “is lost in the annals of the University and in the memories of its surviving members,” reads the newspaper clip included in a file on the campus KKK at the UW-Madison Archives at Steenbock Library on campus.

The authentic KKK fraternity, Kappa Beta Lambda — whose initials stood for Klans-men Be Loyal — chartered in 1924, drew heavily from the army cadet corps. Less influential, unsocial and secretive, its members also ranked low academically. The elite of the interfraternity group “had no wish to share the name of Ku Klux Klan with the hoi poloi,” Messer-Kruse wrote. The KKK’s Kappa Beta Lambda, in turn, changed its name in early 1927, after its application to use the Field House for a Klan rally had been rejected by the Board of Regents the prior semester.

The historical existence of the UW KKK was publicized again in 1970, during a time of sometimes violent protests against the Vietnam War culminating in the Aug. 24 bombing of Sterling Hall that killed a physics researcher.

Six weeks later, the Daily Cardinal reprinted the campus Klan’s 1924 yearbook page, with the remark: “The Good Old Days, No Strikes, No Riots, No Dope: The Board of Regents would have loved it. Just good wholesome fun — with only the occasional flaming cross.”

The inference was obvious, replied Earl Settlemyer, then coordinator for fraternity affairs, in a tart press release that chided the Cardinal for not researching the issue.

The KKK was one of several interfraternity social and leadership societies of the era, Settlemyer wrote. It was not part of the national Klan and had “entirely different purposes and beliefs.” The men in those societies “played a major part in a fund-raising project to build the Union, which produced donations of $50 from one out of every two undergraduates on campus,” Settlemyer said.

The campus honorary KKK made the news again in 1992, when Isthmus reported on it, challenging UW officials’ assertion that the group was not affiliated with the national white supremacist group.

The Madison School District told the Wisconsin State Journal then that Falk, who had been superintendent for 1939 to 1962, was not tied to the national KKK.

News editor Bill Lueders and J. Frank Cook, then director of the UW Archives, argued over a connection between the campus and national groups in correspondence preserved in the archives.

Wrote Lueders: “I still think the weight of the evidence and rationality support the conclusion that the students who formed and affiliated with the campus Ku Klux Klan must have known about, and not been uncomfortable with, the group’s white supremacist bias.”

Cook argued at length that there was no affiliation, but also stated: “Racism and hatred of certain ethnic and religious groups was rampant in the U.S. in the 1920s and there is no reason to assume that this climate did not exist on the campus of the University of Wisconsin.”

Messer-Kruse made a similar observation.

"The same conditions of rapid social, cultural and economic change in America that had bred an atmosphere of fear, distrust and xenophobia,'' and led to a resurgence of KKK in towns across America also affected students on the UW campus, he wrote.

Nearly a century later, communities facing a new wave of fear, distrust and xenophobia are grappling with how to deal with their histories.

After almost a year of discussion and deliberation, the Union Council voted to remove the names of two men who belonged to a UW-Madison campus group known as the Ku Klux Klan from Union facilities.

The Week Ahead: Art Fair on the Square, virtual battle of the bands and Cap Times Democratic debate

A photo in the 1923 Badger yearbook of the campus Ku Klux Klan, a "junior interfraternity social society." 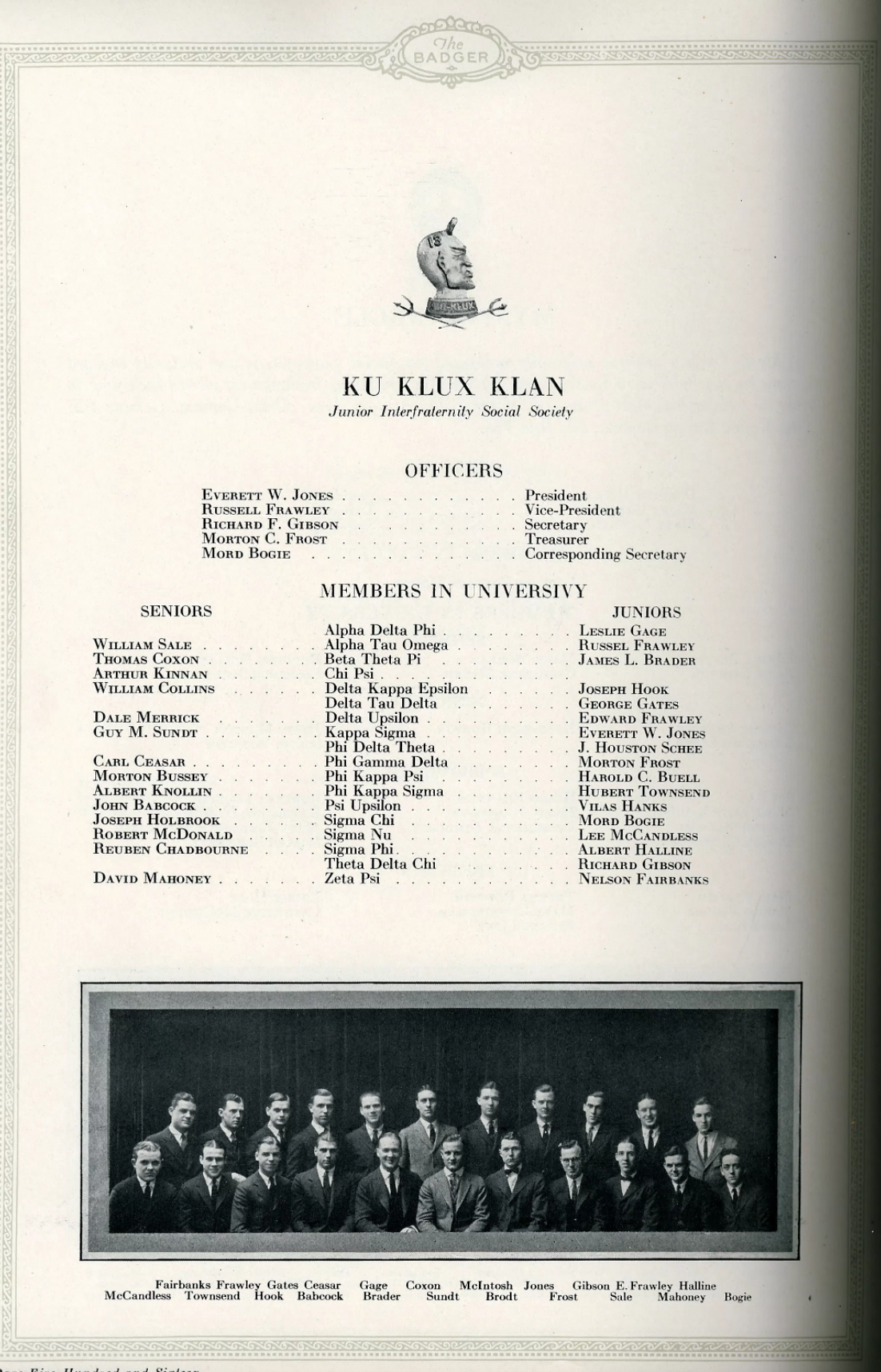 A page from the 1923 edition of the Badger yearbook dedicated to a campus organization called the Ku Klux Klan.