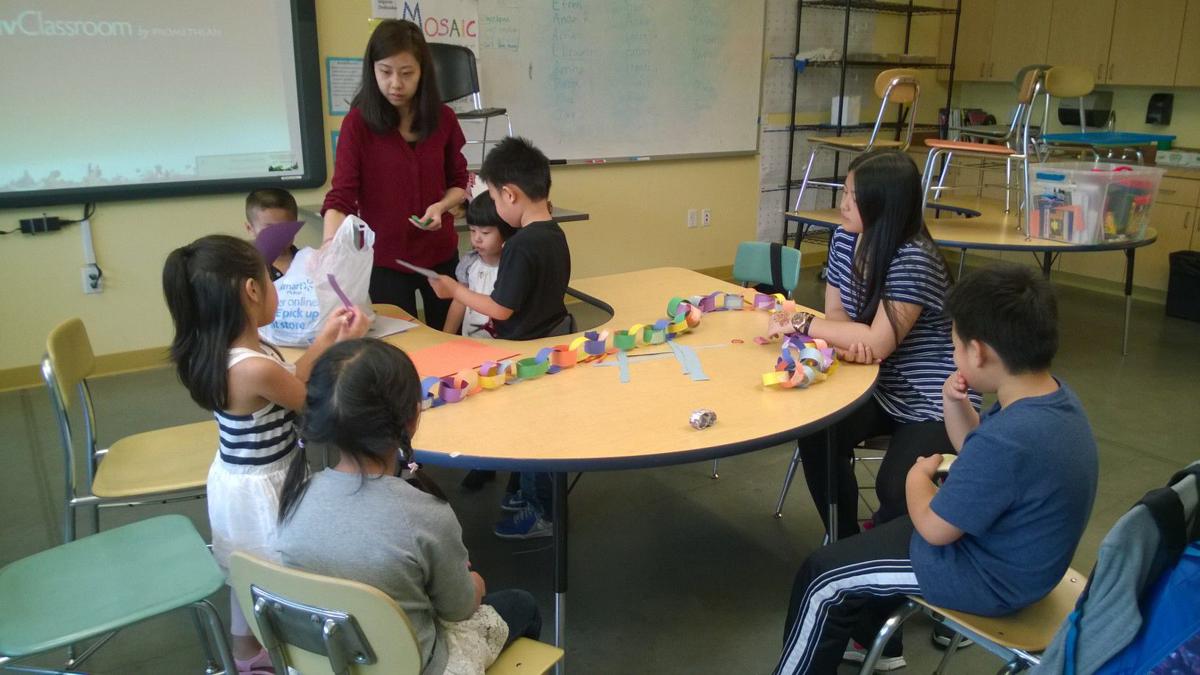 Kindergarden and first grade students work on a project during the Hmong Language and Cultural Enrichment Program at Badger Rock Middle School. 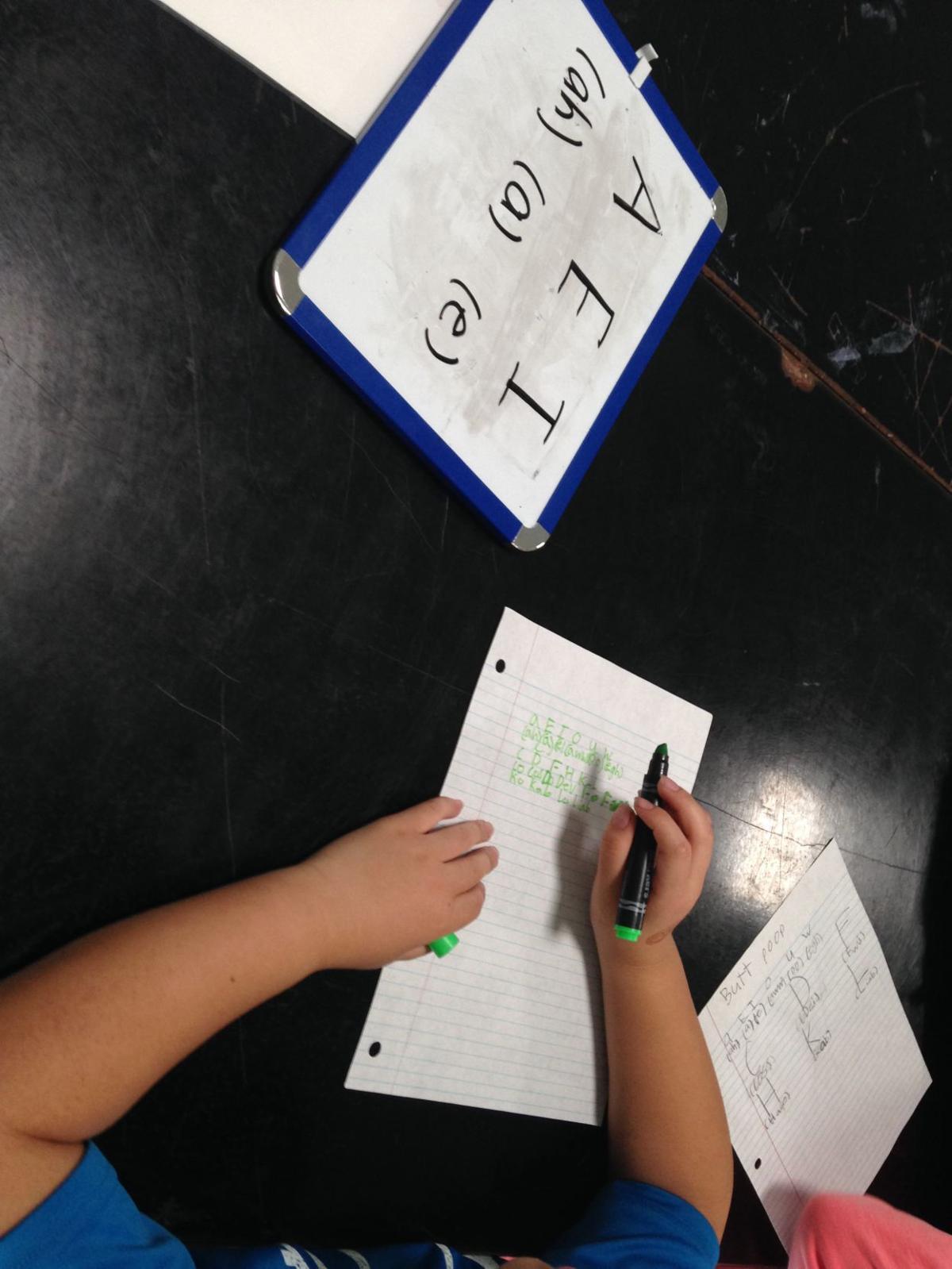 A student at the Hmong Language and Cultural Enrichment Program practices the Hmong alphabet.

Kindergarden and first grade students work on a project during the Hmong Language and Cultural Enrichment Program at Badger Rock Middle School.

A student at the Hmong Language and Cultural Enrichment Program practices the Hmong alphabet.

On a recent Saturday, six kindergarten and first-grade students — equipped with an array of construction paper, tape and paper towel rolls — fashioned replicas of rope and bamboo trees.

The students, who gathered at Badger Rock Middle School on Madison’s south side, were learning how Hmong people used ropes to help them cross the Mekong River from Laos to Thailand to escape ethnic persecution in the aftermath of the Vietnam War. The rope also served as a metaphor to teach the young students about the importance of community support and holding on to their culture.

Identity is an essential tenet of the Hmong Language and Cultural Enrichment Program, which is run out of the school. Coming up on its fifth anniversary, the class recently expanded its sessions from six weeks during the summer to once a month throughout the school year. Each second Saturday, Hmong students learn and practice their native language, gain knowledge about their history, and build relationships with their peers and adults who look like them.

Zoua Vang, a teacher and program coordinator for HLCEP, said programming throughout the school year helps students practice the language more often and get to know one another better.

“Kids get to continue to use their Hmong and maintain connections,” she said. “It builds those relationships and a sense of community.”

Mai Zong Vue and her husband, Peng Her, developed HLCEP with eight Hmong parents in 2013 in response to data that showed the majority of Hmong youth were falling behind their peers in reading and math.

“What kind of workforce are we looking at down the line if our kids cannot read and write, if they cannot perform?” she said. “We will see a whole generation of kids being unproductive as citizens.”

Parents were also concerned with the lack of exposure to Hmong history and culture for students in their schools and at home. Currently, the Madison Metropolitan School District offers Hmong language classes at East High School and an ethnic studies class (that covers Hmong, African-American and Latin-American history) at LaFollette High School. A dual-language immersion program for students at Lakeview Elementary School is slated for next school year.

HLCEP aims to teach K-8 students about their roots to develop a stronger sense of self and, in turn, increase academic achievement and self-esteem. The parents collaborated with student volunteers from the University of Wisconsin-Madison over a three-month period to develop the curriculum.

“We hope that students will gain more confidence and perform better academically through culturally relevant teaching. When they get to high school, they can focus on getting good grades and won’t have to deal with this issue of ‘do I want to be Hmong or not?’” Vue said. “The fact that they know who they are, self-advocacy will come to them easier. They will know how to promote themselves, ask questions, and not shy away; and will do better in school by interacting with their teachers and peers.”

Growing up in Wisconsin, Vang understands the complexity her students face balancing their native culture with, often, competing American values.

“Culturally, (Hmong people) are a collective society. That is something we are losing as a culture with the idea of individuality,” she said. “I think (individuality) is great, but that is also how cultures break apart. You lose that sense of community when you are all about yourself. We want our kids to know they are an ‘I,’ but also remember the ‘we.’”

Vang said it is important for students to build authentic connections with their culture and identity.

“We all know the importance of kids seeing adults that look and talk and speak like them. That’s why I make it a priority to always be here on a Saturday, so they see a role model,” she said.

Shamyan Xiong, 15, participated in HLCEP to build a stronger relationship with her grandmother, who speaks Hmong.

“I couldn’t really understand my grandmother, and that frustrated me,” Xiong said. “Learning how to speak and write (in Hmong) was really useful.”

Like many HLCEP alumni, Xiong returned to volunteer and mentor younger students. She is compelled to help them understand the importance of maintaining Hmong language and culture for years to come.

“As generations are coming by and (older ones are) disappearing, things will fade away. Culture is one of those things,” Xiong said. “In general, cultures and languages are important, but I feel like Hmong is especially special because we don’t have our own country and it makes it harder for us to preserve it.”

HLCEP serves about two-dozen kids during the school year and nearly twice as many during the summer. Students have come from as far away as Appleton to participate. Parents pay a modest tuition, with HLCEP supplementing the costs through in-kind donations, city and foundation grants, and  fundraising, like the upcoming Hmong Gala later this month at Badger Rock. MMSD also provides a support staff person.

“Without community support, we wouldn’t be able to do what we do,” Vue said. “It is important that other people recognize our cause in closing the achievement gap because when one kid is down, everyone is down.”

Badger Rock Middle School officials are seeking a five-year renewal of its charter agreement with the Madison School District.

Voting in Tuesday's primary election? Here's what you should know

Sen. Jeff Smith: Pay attention before your car is towed

The Week Ahead: 'The Color Purple,' Russ Feingold, and 'Last Man Fishing'

Madison voter turnout in Tuesday primary up from 2019