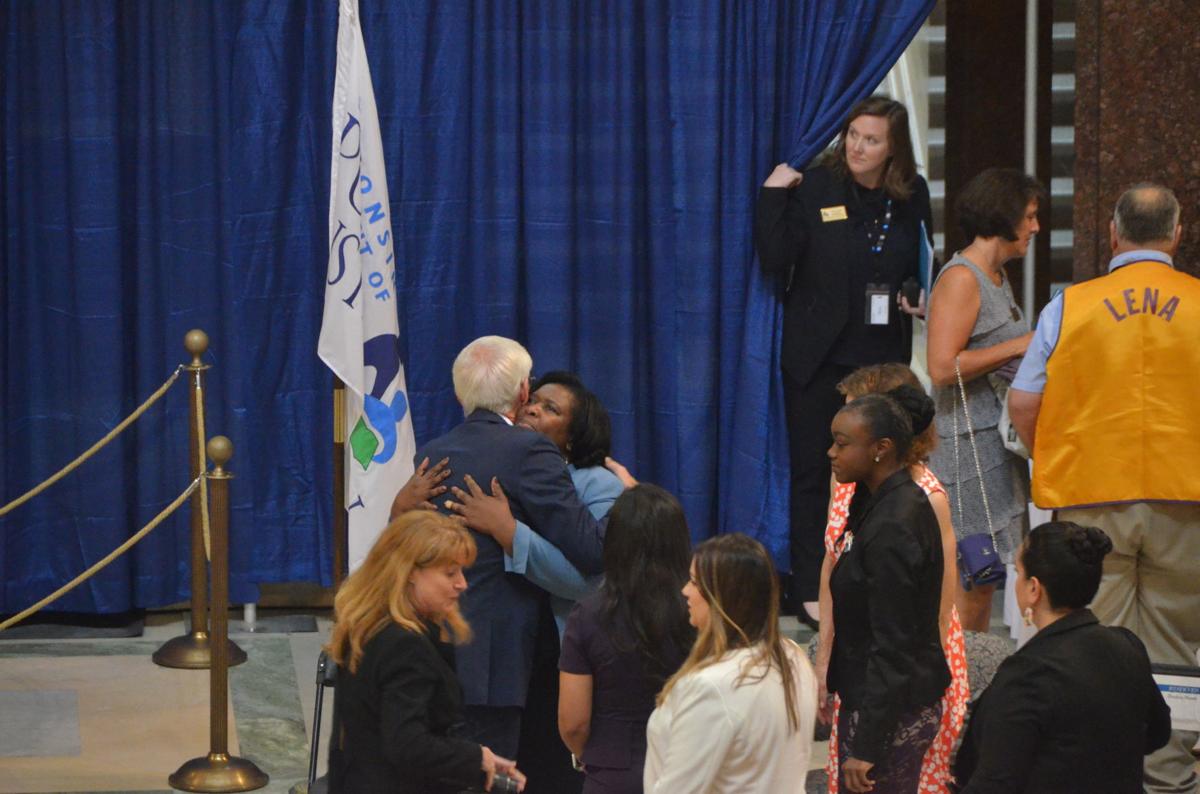 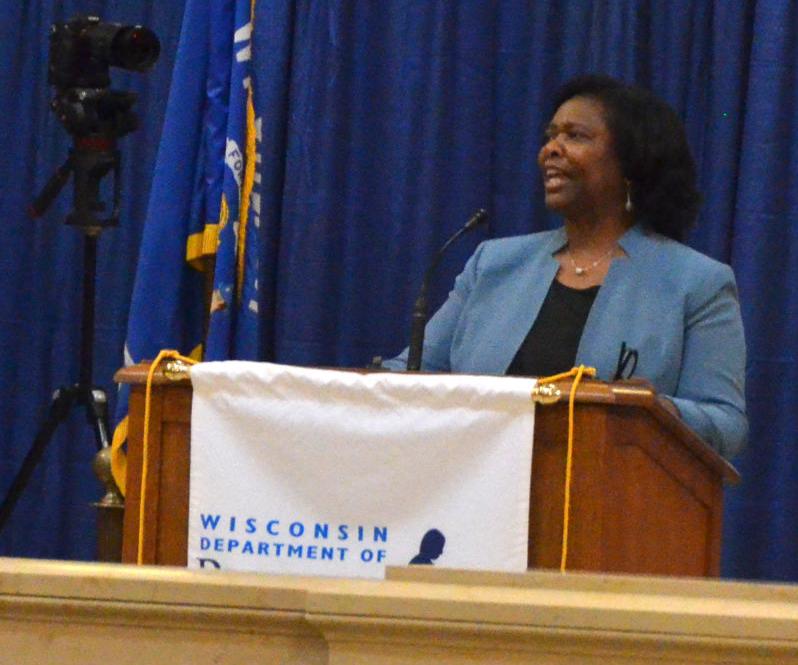 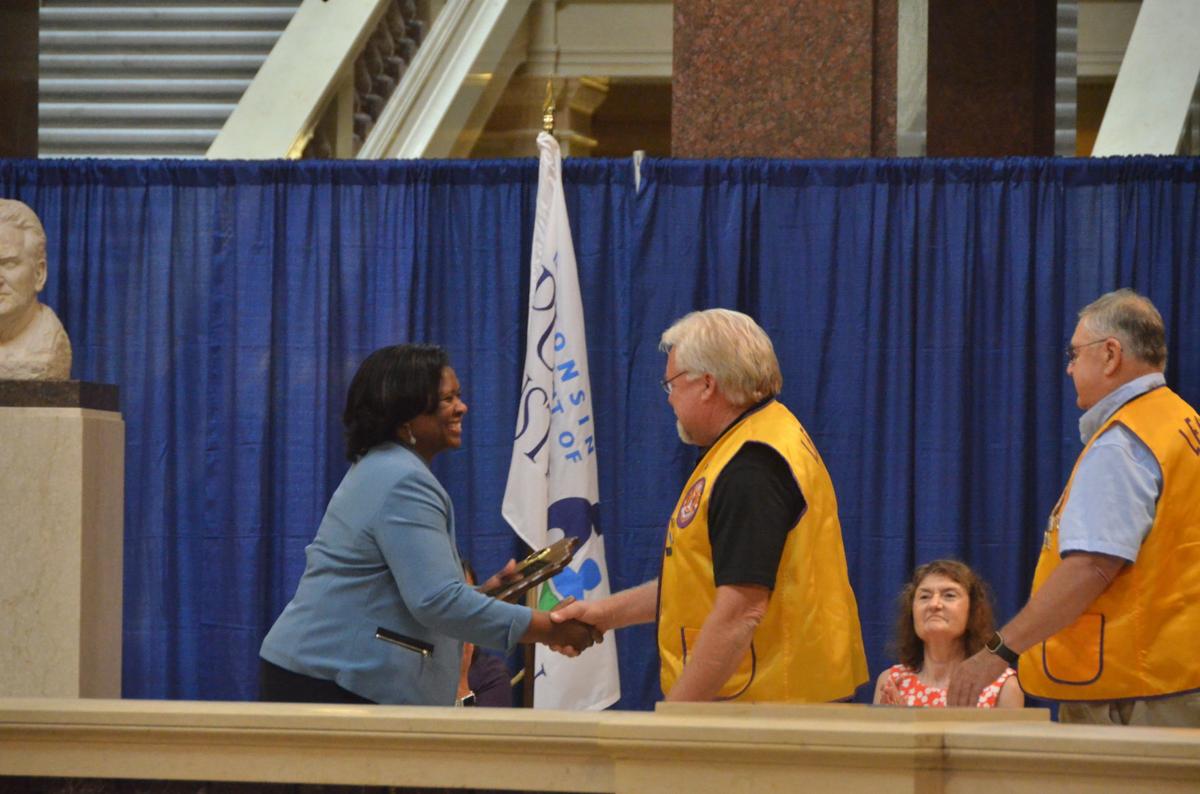 State Superintendent Carolyn Stanford Taylor, left, gives a Friend of Education award to representatives from the Lena Lions Club during her first state of education event Thursday, Sept. 19, since being appointed to the position in January.

State Superintendent Carolyn Stanford Taylor, left, gives a Friend of Education award to representatives from the Lena Lions Club during her first state of education event Thursday, Sept. 19, since being appointed to the position in January.

In her first state of education address as the state Superintendent, Carolyn Stanford Taylor stressed the importance of working together to solve the problems facing Wisconsin’s students and teachers.

Chief among those, the former Madison School District teacher and principal said, is making sure there are enough teachers to fill the classrooms and address the other challenges like the ongoing “crisis” of the achievement gap between white and black students.

“At a time when far too many teachers are leaving the profession and too many students aren’t aspiring to becoming teachers, it is so important to commit to doing all we can to recruit the next generation of educators and to embrace the ones that we have,” Stanford Taylor said.

As the Cap Times reported last month, state officials estimate a nearly 30% decline in teacher education program enrollment since 2010. Stanford Taylor said during a press conference following her speech she’s hopeful new funding in the most recent state budget can help attract more staff to rural areas, specifically, but that more needs to be done, including within the profession.

“It’s being innovative and creative around the ways that we attract additional staff,” she said. “One of the things I’m saying to staff when I go around to schools is we have to be our own best advocates. We have to be the ones talking up our profession."

As her predecessor Gov. Tony Evers sat nearby, Stanford Taylor had some praise for the budget he signed after it went through the Republican-controlled state Legislature, which she said had “bright spots.”

Even with that, Stanford Taylor said more needs to be done in those areas, and said during the press conference she is confident more funding would help improve statewide test scores, which saw a slight drop in math and English Language Arts for the 2018-19 school year.

While she praised graduation rates, ACT scores and Advanced Placement participation, she also said not every student had the same access.

“We have yet to fully reconcile that success with the deep and persistent gaps in achievement, opportunity and access that exist for far too many of Wisconsin’s children,” she said. “Fifty years after the Civil Rights Act, we are still fighting for equitable educational opportunities for all of our children, no matter their races or background.”

She pointed to early education as one key place to improve that gap.

“We have to get learning right on the front end or Wisconsin as a state will never achieve true success,” she said.

Classroom ‘exodus’: Education schools grapple with finding the next generation of teachers as more leave the profession

“We really have to highlight the benefits of being a teacher,” said Kimber Wilkerson, the faculty director of the School of Education's Teacher Education Center. “We didn’t have to do any recruiting at all in the past. People just wanted to be a teacher.”

Max Puchalsky: Vote for Sanders to avoid a boycott of the Democratic Party