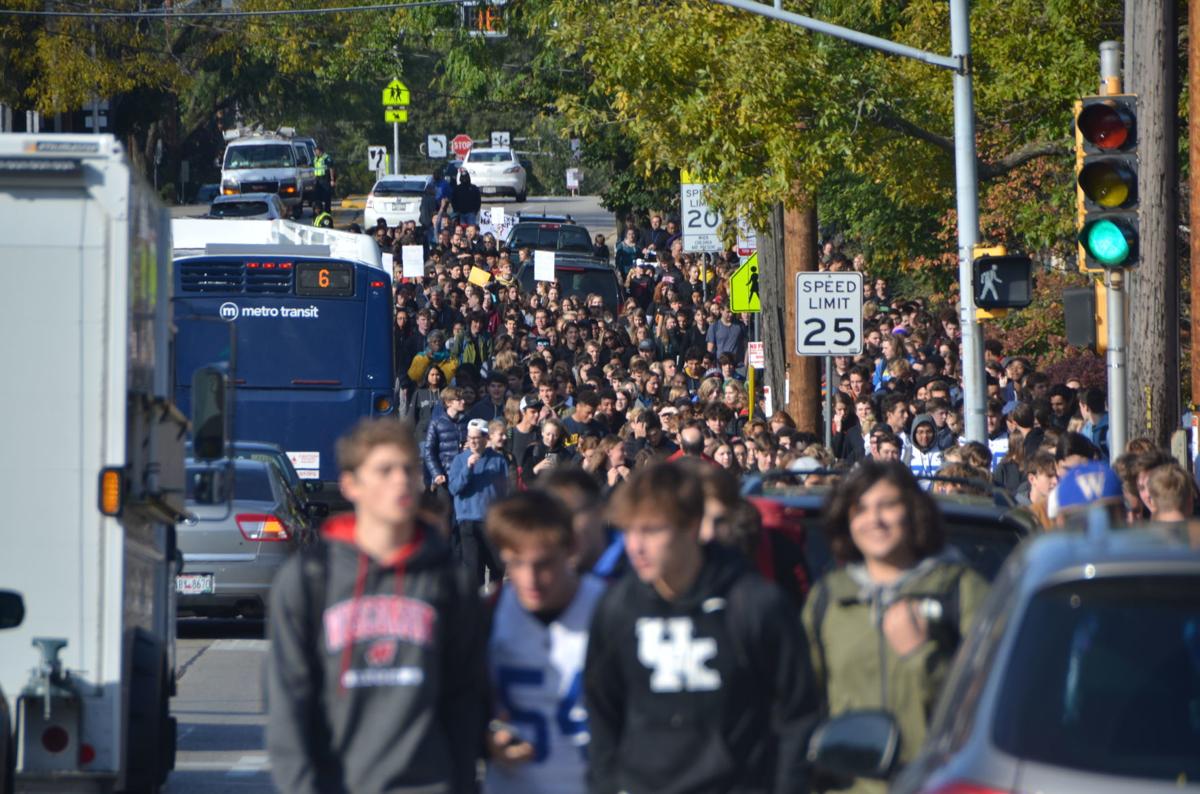 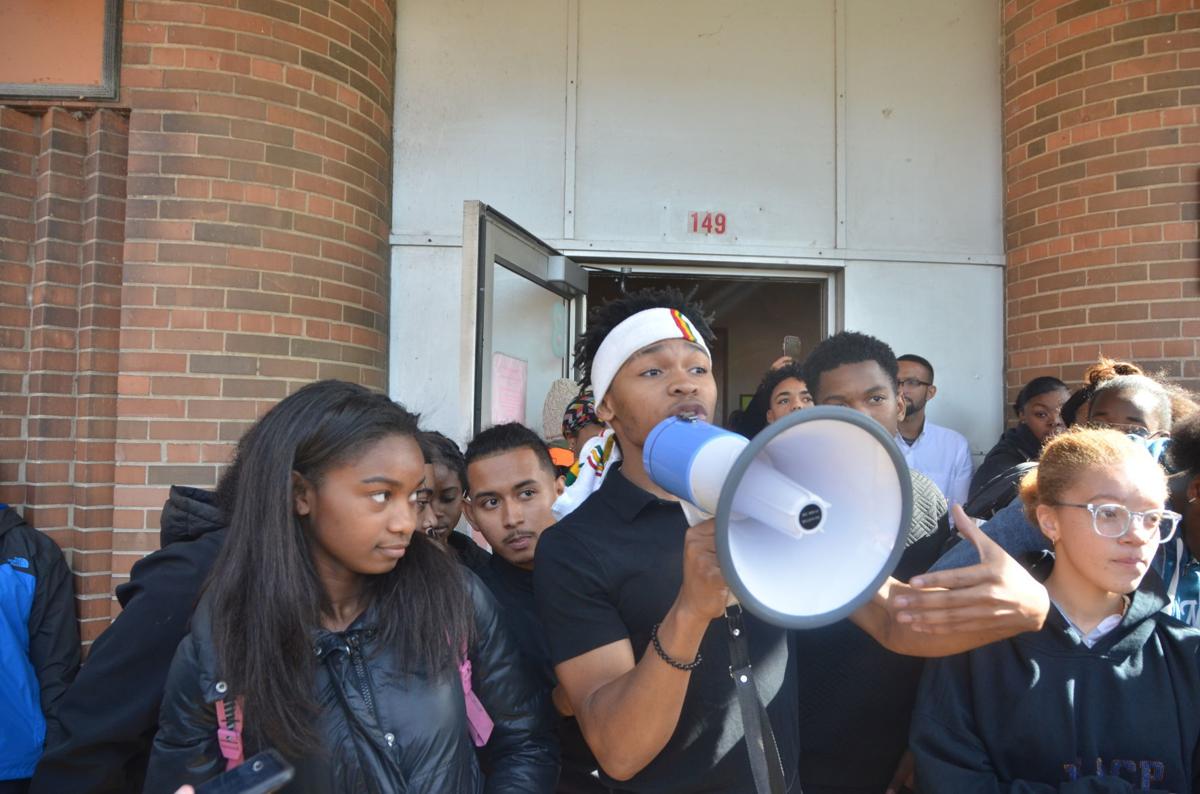 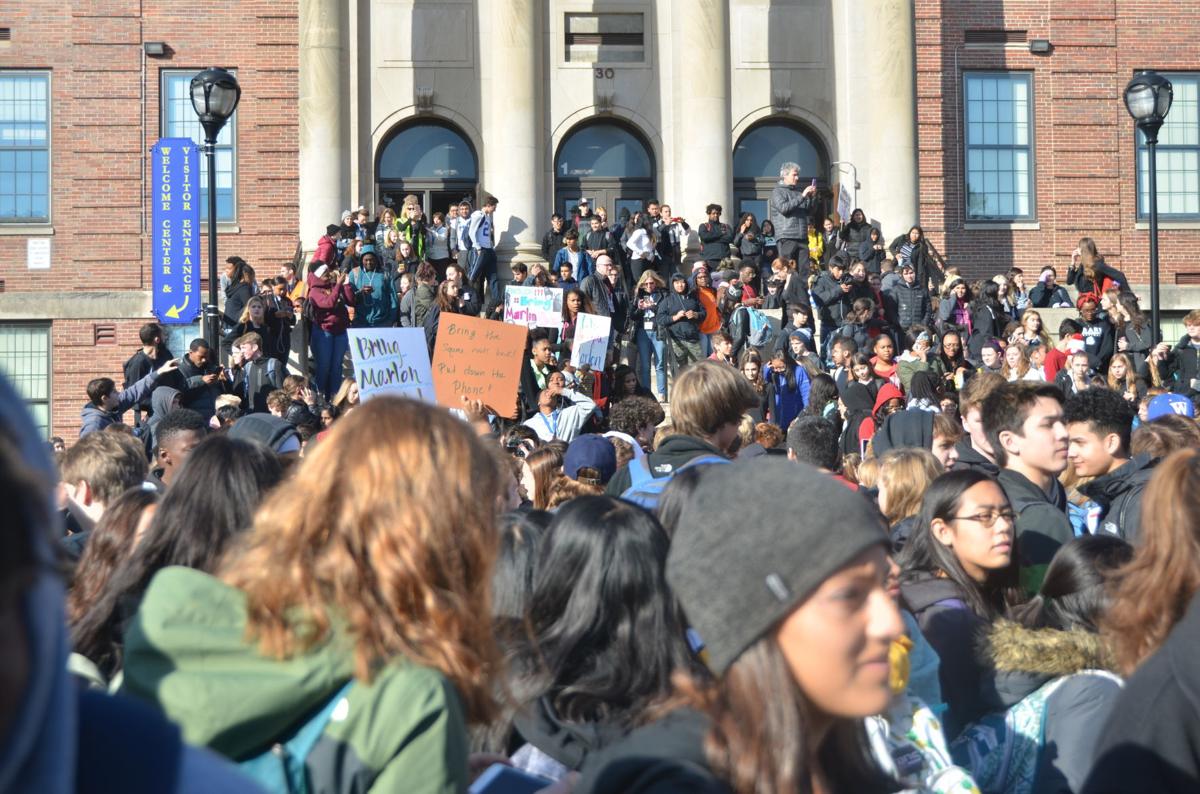 “He brings a smile to my face,” said junior Aaliyah Wheaton — who Anderson calls “Cheeks.” “He makes my day everyday. I come to school just to see Marlon, just so he can say hi to me, so he can call me my nickname.”

She was part of the crowd of more than 1,000 students and staff who walked out from the school Friday morning and marched to the Doyle Administration building nearly two miles away to protest Anderson’s firing this week and the district’s “zero tolerance” practice toward the use of the n-word by staff. There, the executive committee of the school’s Black Student Union — led by Marlon’s son, Noah — met with interim superintendent Jane Belmore, School Board president Gloria Reyes and board member Savion Castro.

Anderson, a black man who has worked in the district for 11 years and as a security assistant at West for the last three, was fired for using the word in front of a black student in an Oct. 9 incident. Anderson has said he told the student not to call him a “n****” after the student called him a “b**** a** n****.”

That context is important, Anderson's supporters have said, and makes the incident different than the seven last year in which a staff member was fired or resigned for using the racial slur. All of those staff members were white, Belmore said Friday. Madison Teachers Inc. filed a grievance on Anderson’s behalf Thursday, and Reyes said after meeting with the students she wants to see an “expedited process” for that appeal.

Belmore said one of the cases from last year is also under appeal.

Several West staff members also participated in the walkout, and the district followed its normal absence policy for students: if their parents called to excuse them, they would be excused.

Noah Anderson, a senior, said the size of the crowd and outpouring of support for his father over the past few days has been “beautiful,” and that his father was greatly appreciative of everyone.

“He loves you,” he told the crowd that remained outside the Doyle building after the end of the nearly two hour BSU meeting with administrators. “He loves all y’all. Y’all mean everything to him.”

Noah said his father would return to the school if he is reinstated. But the BSU president also has hopes beyond his father’s employment for what Friday’s walkout can mean, including student voice being part of decisions like the “zero tolerance” practice in the future.

“This is the generation that can end racism,” he said. “This is the start of something great.”

The district changed its practice last year in responding to staff use of the n-word after a series of incidents.

But that change to a practice of “zero tolerance,” students and staff said Friday, takes away the opportunity to talk about the word’s history and learn from it. That’s exactly what Anderson was doing with the student who had used the word toward him in the Oct. 9 incident, said senior Destiny Lloyd.

“He was literally trying to do his job, trying to redirect that child from using — he needed that teaching moment from Marlon, somebody of his color to tell him, ‘You shouldn’t use that word,’” Destiny said. “It’s different when a white woman is trying to tell a struggling black student to go to class. It’s a power struggle.”

In developing its practice, the district should have reached out to students, Noah said. After the meeting with district officials, he said he’s confident they will “be heard in anything that involves us.” That will begin with the BSU meetings next week, which Castro is expected to attend to speak with the students.

Reyes and Belmore said after talking with the students Friday, they understand the need to reconsider how context can play a role in the word’s usage, though Reyes said Anderson’s firing was not a mistake given the district’s practices established last year.

“I think it’s going to instigate us to take the time to pause and relook at this practice,” Belmore said. “What we are hearing is there are many other lenses we should be looking at this policy through.”

Christopher Bester, who has known Anderson since Bester was 13 and is a coworker at West, said he hoped the district would reconsider the zero tolerance practice while listening to people of color in creating a new policy.

“I just don’t believe white people have the right to control that word,” Bester said. “That was a teachable moment he was going through.”

West special education teacher Jonathan Brisco said those teachable moments are key to eradicating the use of the n-word, which has a “deep, dark, hateful” history in the United States. That means zero tolerance is not going to “get rid of it overnight,” he said.

“You can’t just drop it out of the vocabulary,” Brisco said. “We need to educate our children.”

Noah said that there are generational differences in the use of the word. But no matter how it’s used, he said people need to understand it.

“We’ve got to educate ourselves on the history of the word,” he said.

‘We need him back’

Students said the school has felt different the past few days without Anderson’s smile and greeting.

“He makes all of these kids happy,” said junior Jenaye King, gesturing at the crowd marching around the Doyle building while their peers met with officials inside. “We need him back.”

Dean of Students Michael Jones, who is new to the school this year after working for five years at Blackhawk, said the size of the crowd showed how many students Anderson made an impression on.

“The fact that you see not only our students of color but our white students, across all grades, races, ages, social status, socioeconomic status; they all believe in the same thing, which is Marlon is and was important to West and to our community,” Jones said. “We need to make sure that the board and the powers that be … understand how important he is.

“No matter what the intentions are, this is the impact.”

Jones was one of a few dozen staff members who attended the walkout. The vice president of MTI said that risked a letter of reprimand and docking pay, but he and the other staff members felt it was worthwhile.

“I don’t want to personally speak for (principal Karen) Boran, but I know the administrators from the top down in the building did not want this to happen,” Jones said. “Unfortunately the decision-makers made their decision and the building had to suffer the consequence as a result. Hopefully they get the message that the building’s not going to take it lying down.”

Destiny hopes to see Anderson back at West soon, so he can help bring the girl he nicknamed “Tiny” out of the funk she often falls into in the mornings.

“Whenever I walk into the building, he says, ‘Don’t be tired, be Tiny,’” Destiny said, smiling. “I kind of miss having him here a lot. I’ve cried a couple times since his termination.

“He took such a substantial role in everything at West and motivated us to keep us going.”

“Thank you to the 1,000 plus students for allowing your voices to be heard and to all the people from across the globe for reaching out to my family,” Marlon Anderson wrote upon the news. “Thank you MTI, West BSU, my son, Noah Anderson and my colleagues at West High School for your prayers and support. You are amazing people!”

The Madison Metropolitan School District rescinded the termination of West High School security guard Marlon Anderson Monday, five days after it was announced. “For them to listen, that really means a lot,” his son Noah Anderson said. “I think the student voice was humongous.”

Two other grievances over racial slur use in process, Madison teachers' union says

“In wanting to be clear, I quoted the student and said the n-word out loud and in its entirety. I did not direct the word at anyone," said Nuestro Mundo social worker Sandra Rivera.

Madison School Board members said Monday night the district needs to rethink a "zero tolerance" approach to use of the n-word by staff and make sure the history of the word is understood.

Another Madison School District staffer has been disciplined for allegedly using a racial slur around a student.

'I broke a world record in hugs for one day': Marlon Anderson returns to Madison West

West High School security assistant Marlon Anderson said it was “absolutely amazing” to see the students again when he returned to the school Tuesday.

A pair of black leaders in the Madison community emailed district officials and the School Board earlier this month outlining incidents last year in which a white student at Frank Allis Elementary School allegedly called multiple black teachers the n-word.

An Oregon High School student is calling for her former middle school in the same district to end a practice that has students count calories in health class.

When the calendar turned to 2019, the Madison School District had a superintendent in her sixth year and a School Board president who had been…

In his Dec. 17 decision, hearing officer Dennis McGilligan writes that the social worker's use of the word during a staff meeting “cannot be reasonably construed as normalizing the word and perpetuating its harm” and that the district’s communications on the use of racial slurs were unclear.

The School Board could make the decision on discipline related to a racial incident, focusing on a restorative rather than punitive process.

Milwaukee Film Festival: 'Black Bear' flashes its claws when you least expect it