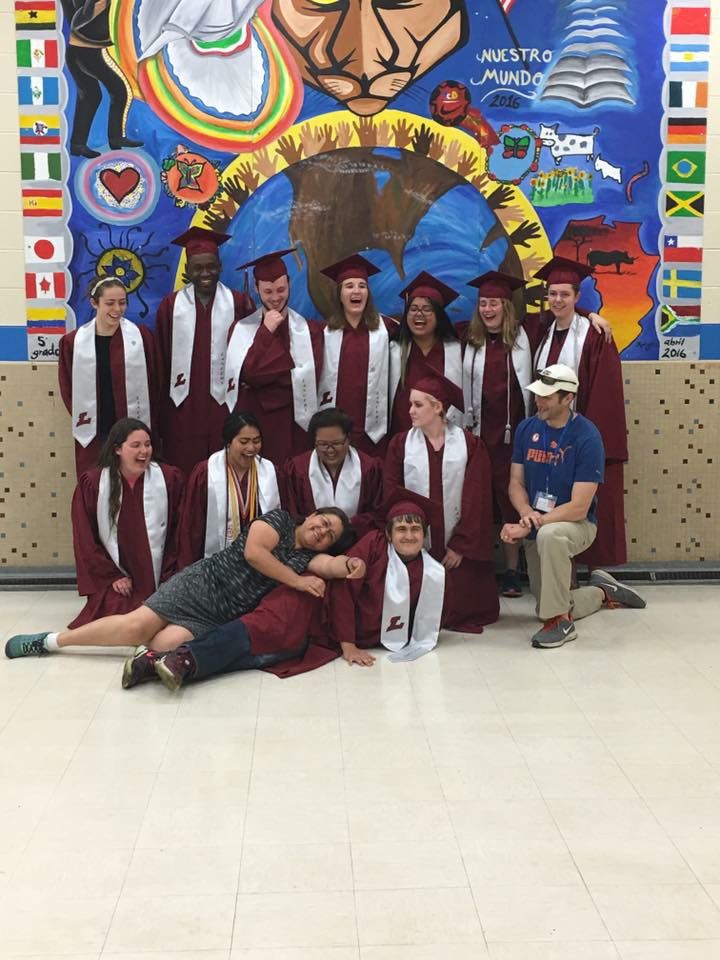 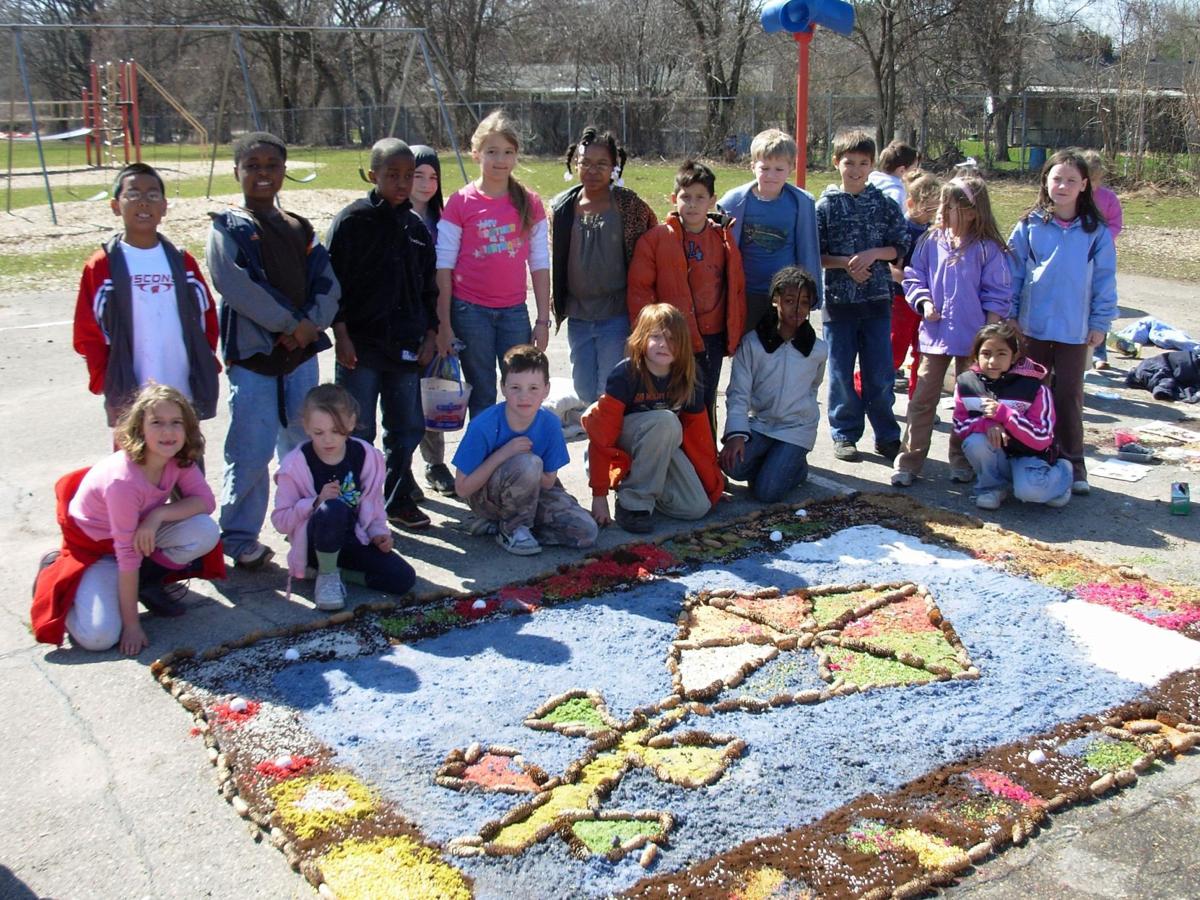 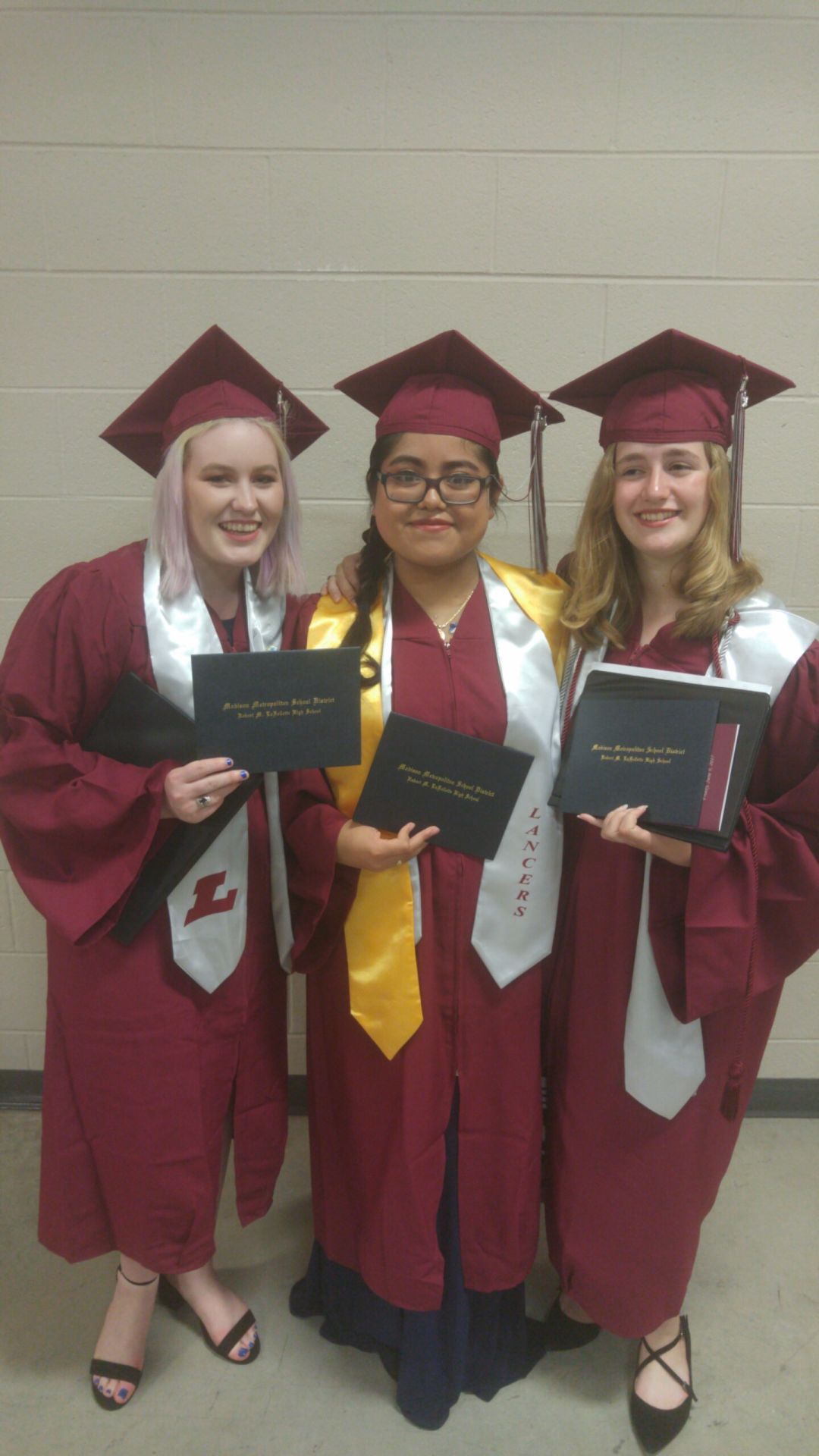 Melissa Perez (center) poses for a photo with classmates (l-r) Athena Olson and Rebecca Watring at LaFollette High School's graduation. They are three of the 45 La Follette students who graduated this spring with a seal of biliteracy, a state certification recognizing their mastery of two languages.

After 13 years of dual-language instruction, the Madison Metropolitan School District’s first class of graduates walked across the stage this spring with Wisconsin’s new Seal of Biliteracy, certifying their mastery of a foreign language during high school.

Forty-five students from Madison La Follette High School earned the seal of biliteracy in Spanish. All of the students were a part of the first class of 50 kindergartners at Nuestro Mundo Elementary School’s dual-language immersion program. The majority of the cohort continued with the DLI program at Sennett Middle School and followed the required course of study at La Follette to earn the seal.

Starting next school year, students across the district will have the chance to earn the biliteracy seal with their high school diplomas. With the expansion, MMSD expects the number of qualified students to expand exponentially.

The seal of biliteracy was created by the Wisconsin Department of Public Instruction in partnership with several national organizations that champion bilingual education. Wisconsin is one of 27 states to offer the seal to graduating seniors. According to DPI guidelines, the seal certifies that students, “demonstrated achievement in bilingualism, biliteracy and multicultural competence in and through two or more languages.” MMSD is one of three Wisconsin school districts so far, including Verona and Waukesha, to offer the seal of biliteracy to graduates.

Throughout their academic career at La Follette, students took eight classes, including two AP courses, to earn the seal. All of the classes were in Spanish and focused on language arts, literature and history. In addition to successfully completing all of the coursework, students were required to pass a series of English and Spanish assessments, and meet all other MMSD graduation requirements.

Silvia Romero-Johnson, executive director of the Office of Multilingual and Global Education at MMSD, said reading, writing and speaking in another language, across disciplines, is a key component of biliteracy mastery.

“Being bilingual is about having the verbal skills to interact on a conversational level. To be biliterate (also involves) accessing written texts, reading and communicating in writing with different audiences,” Romero-Johnson said.

“To access texts that deal with history, geography, politics and government is a different level of sophistication in the use of language. It takes a commitment to develop all of those domains and do it in a way that is culturally appropriate,”she said.

Liliana Teniente, a recent La Follette graduate who will attend the University of Wisconsin-Madison in the fall, said being biliterate means a lot to her family as it helps her to maintain a connection to her Mexican culture and heritage.

Teniente's mother grew up in Wisconsin and "felt like she lost a big sense of her Spanish, so she didn’t want me to have that same problem going through school,” Teniente said. “The program was an awesome opportunity for me to learn English and Spanish, and develop cognitive skills in both languages.”

Sean Storch, principal at La Follette, said the biliteracy distinction recognizes the effort students have put in over the years to master another language, an invaluable skill as they enter the 21st-century workforce.

“They will have deeper self-knowledge, stronger cultural competence and be prepared to be leaders in their community," he said. “In the past, many opportunities for children to grow up bilingual were lost, because being able to speak multiple languages did not hold the value it does today.

"It is a great accomplishment and honor to be bilingual, and very meaningful and useful in our community.”

Melissa Perez, a La Follette graduate who will attend UW-Parkside in the fall, said she plans to use her biliteracy skills to give back to her community as a nurse.

"I want to get certified as a Spanish translator so I can translate for my patients,” she said.

“Growing up, me or my sister would always go with my mom and translate everything for her. It is really nice to start helping out people from your own community so you can reassure them everything is OK and give them some peace of mind,” Perez said.

Romero-Johnson said having the first class of students who earned the seal of biliteracy coincide with the graduation of the first cohort of the district’s DLI program is particularly special, and recognizes the students’ accomplishments and commitment to mastering multiple languages.

“Part of the goal of graduating college, career and community ready is to be able to have the language proficiency skills that are needed to interact with people of different cultural and language backgrounds,” she said. “There was a symbolic aspect of acknowledging the first group of kids and families that committed to a new program that didn't exist in the district that we believe is so positive and valuable.”

Several graduates returned to Nuestro Mundo Elementary School recently to celebrate their accomplishments with current students. Principal Joshua Forehand said he was extremely proud of the graduates and what they represent for Madison's greater DLI community. Since its inception, the program has expanded to 16 MMSD schools.

"Seeing those students in their caps and gowns and the look of pride on their faces was unforgettable. I think they knew they were key players in something really special," he said. "They paved the way for a program that would change the lives of thousands of students in our community."

Teniente has two younger siblings and a cousin at Nuestro Mundo. She said coming back to share her accomplishments provides younger students with a model for success.

“It is always important for them to see our accomplishments and what we’ve done so they can say, ‘Oh, that can be me in the future,’” she said. “It also helps us to look back and remember how far we’ve come.”

Brendan Kearney had also been a teacher and assistant principal at the school.

Local teacher's union, Madison Teachers Inc., threw their support behind the district's plan to maintain masking requirements following the sharp rise of cases connected to the more contagious delta variant of the virus across Wisconsin.

"I just think there's a way (UW-Madison) could reopen more safely, but it's so afraid of losing what little dollars the state government will hand to them that they won’t," one employee said.

Conservatives are calling for a more granular funding model for funding K-12 schools that focuses on the individual financial needs of each student, rather than each district

The hotel developer paid its rent last year, when the lease began, but hasn't yet made its July 1 payment for this year.

Chancellor Rebecca Blank asked all instructors teaching on the first day to offer a remote learning option for students.

A field trip to a Wisconsin Dells water park was cut short when a thunderstorm rolled in, giving campers another water-themed lesson.

To mask or not to mask? School districts face a mix of parent opinions and expert guidance

While area districts are planning for most students to return for full-time, in-person instruction this fall, they are also working out what mitigation measures should be in place. Recent School Board meetings in Waunakee illustrate the challenge they face.

UW Archives launched a project last April to document the pandemic, collecting nearly 340 digital items over the course of a year.

Melissa Perez (center) poses for a photo with classmates (l-r) Athena Olson and Rebecca Watring at LaFollette High School's graduation. They are three of the 45 La Follette students who graduated this spring with a seal of biliteracy, a state certification recognizing their mastery of two languages.