A new report from the Madison Metropolitan School District shows that police interactions with students continued recent trends in 2019-20, with few citations and arrests but Black students making up a disproportionate number of those.

While the data come with caveats — most notably that the in-person school year was three months shorter than normal because of the COVID-19 pandemic — the report outlines statistics for Madison Police Department officers responding to each of the four comprehensive high schools, including interactions with students that resulted in arrests and citations.

The numbers were low compared to the student population, but among those who were arrested or cited, a disproportionate number were once again Black students. The data include incidents involving the school resource officers stationed at each of the four schools as well as officers who responded to a school campus for a call.

The report, which covers Sept. 1, 2019, through March 13, 2020, comes about a month after the School Board voted unanimously to end the more-than-20-year-old SRO program amid a nationwide reckoning with systemic racism, especially in policing. Board member Ali Muldrow cited the ongoing disparities ahead of her vote.

“Over the course of the entire lifespan of this program of policing in schools, a majority of students every year to be arrested in school are African American children,” Muldrow said June 29. “Policing in schools has had an impact in terms of racial profiling within education.” 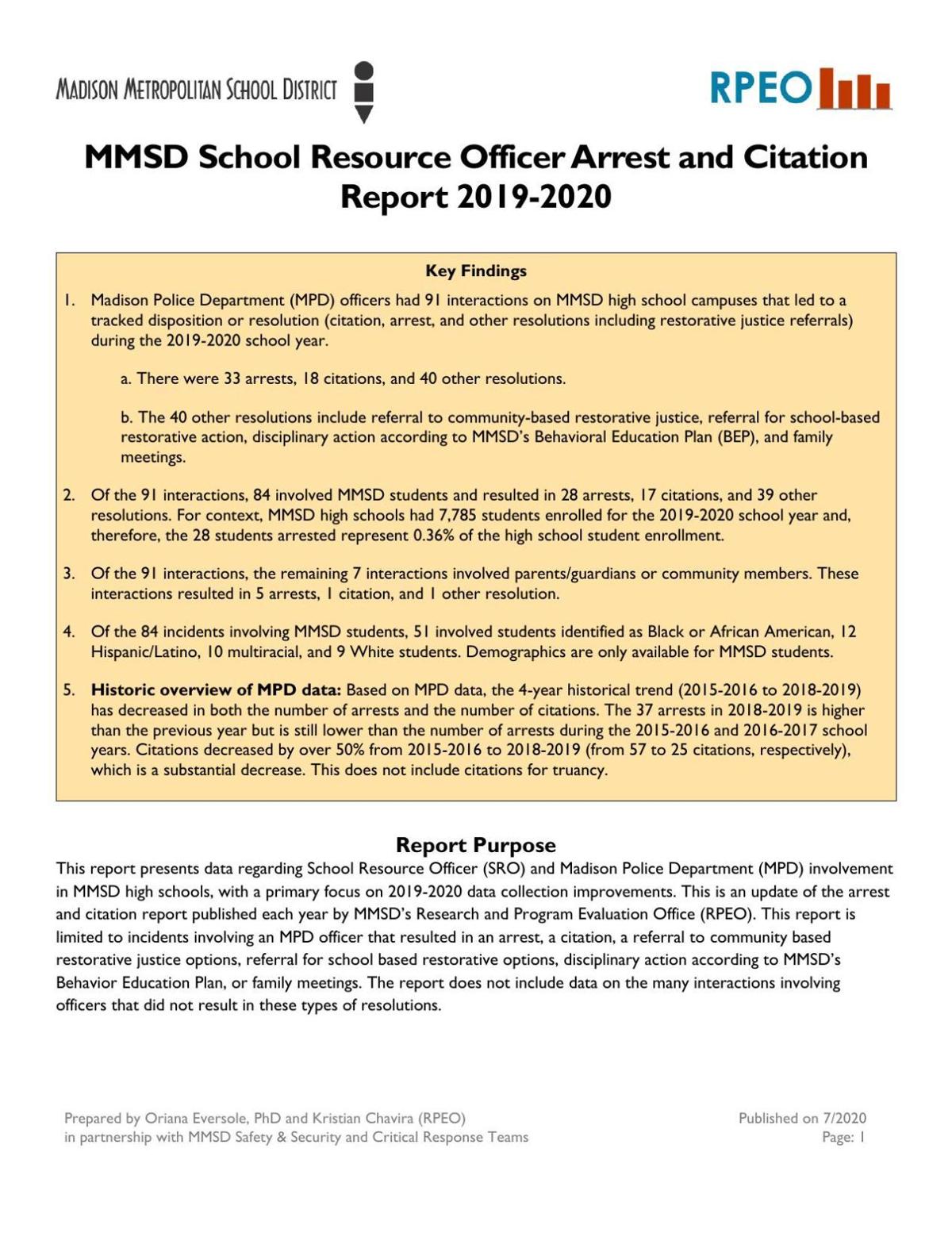 The data published last week shows that MPD officers had 84 interactions with students that led to a citation, arrest or other resolution including a restorative justice referral. Of those, 51 were with Black students.

“Whenever a student is arrested or cited, it reaffirms our need to continue to make disproportionality a priority, and if you refer to the report … you will see all the ways we have worked to divert youth of color from the justice system this past year and our commitment to continuing to focus on support and intervention work,” district spokesman Tim LeMonds wrote in an email Tuesday.

To that end, LeMonds and the report cited efforts like school-based restorative practices, de-escalation through Nonviolent Crisis Intervention, family planning and problem solving, social/emotional teaching and intervention and risk assessments for threats, violence and suicide, among others.

MPD spokesman Joel DeSpain forwarded a request for comment to the captain overseeing the SRO program, but that person did not respond to the Cap Times.

The report doesn’t list the arrest or citation numbers for any other racial demographic, as the district redacted any number smaller than seven to protect student privacy. White students had nine total interactions, all of which resulted in “other resolution” outcomes, which can include a referral to youth court or restorative action — disciplinary action under the district’s Behavior Education Plan — or family meetings.

Most of those arrested and cited were also low-income students, with 22 of the 28 arrests and 12 of the 17 citations given to that demographic of students.

[Like MMSD, districts around the country planning for fall following votes to end police in schools]

Among the four high schools, East, La Follette and West were nearly evenly split with 29, 27 and 26 interactions, respectively. Memorial, however, was an outlier with just nine interactions, which resulted in six arrests, one citation and two “other” results.

La Follette and West each had seven arrests, while East had 13.

The 28 total student arrests represent .36% of the total number of students enrolled at the schools, the report notes. Of those arrests, six were for behaviors that fall under Level 5 offenses on the district’s Behavior Education Plan, which require a recommendation for expulsion. One was for possession of a firearm, three for possession of a “facsimile weapon” like a BB gun and two were for use or threatened use of other weapons like a knife or taser, according to the report.

“The most common reasons MPD officers intervened or were called by school for assistance are: possession of a dangerous weapon, physical fights, unlawful trespass/refusal to leave campus, serious (imminent) threats of school violence, theft/burglary, and intervening in a mental health crisis (e.g., student harming self or threatening to harm self/others),” the report states. “Many of these incidents did not lead to an arrest or citation, but instead resulted in some type of restorative practice.”

The district plans to continue to report on arrests and citations on MMSD campuses, according to the report, even without SROs stationed at the schools.

“Even though the SRO contract will not continue, there will be continued efforts to closely monitor and report arrests and citations on MMSD campuses on a quarterly and annual basis,” the report states.

LeMonds wrote that the district’s safety and security team “is committed to fostering and promoting equitable outcomes for our school communities” as it plans for the 2020-21 school year. Efforts will include training for all staff on the safety-related duties of their job, reviewing research and analyzing data, identifying and ensuring safety teams and structures are in place at all schools, making suggested changes of policies and procedures and collaborating with students, families and community partners to achieve the BEP’s goals, “including promoting a culture of safety and belonging for all people in MMSD, and reducing disproportionality in exclusionary discipline.”

While the report’s authors cautioned against historical comparisons, as the data source was changed for the 2019-20 school year, they also outlined trends from 2015-19.

MMSD previously reported on data provided by the MPD nearly a year after a school year had ended. The new data collection allows the report to be published in the summer immediately following the school year.

The committee will help create safety and security guidelines for this year, which will be the first in more than two decades without school resource officers stationed at the Madison Metropolitan School District's four comprehensive high schools.

The City Council will introduce its own resolution to end the contract July 14, and could vote as soon as July 21. School Board president Gloria Reyes said the termination was a board decision and does not require the city to do so, though board members appreciate the city's support.

A subcommittee will include students, parents, teachers and “other stakeholders” to “begin work on a comprehensive review of what MMSD’s safety and security strategy could look like without SROs in schools.”

The proposal follows a state law change earlier this year that requires certain reports and bans prone restraints of students.

The 24-member committee will report back to the School Board Oct. 8 after five meetings.

'Can You Hear Us Now?' shows the unfair fight that is Wisconsin politics