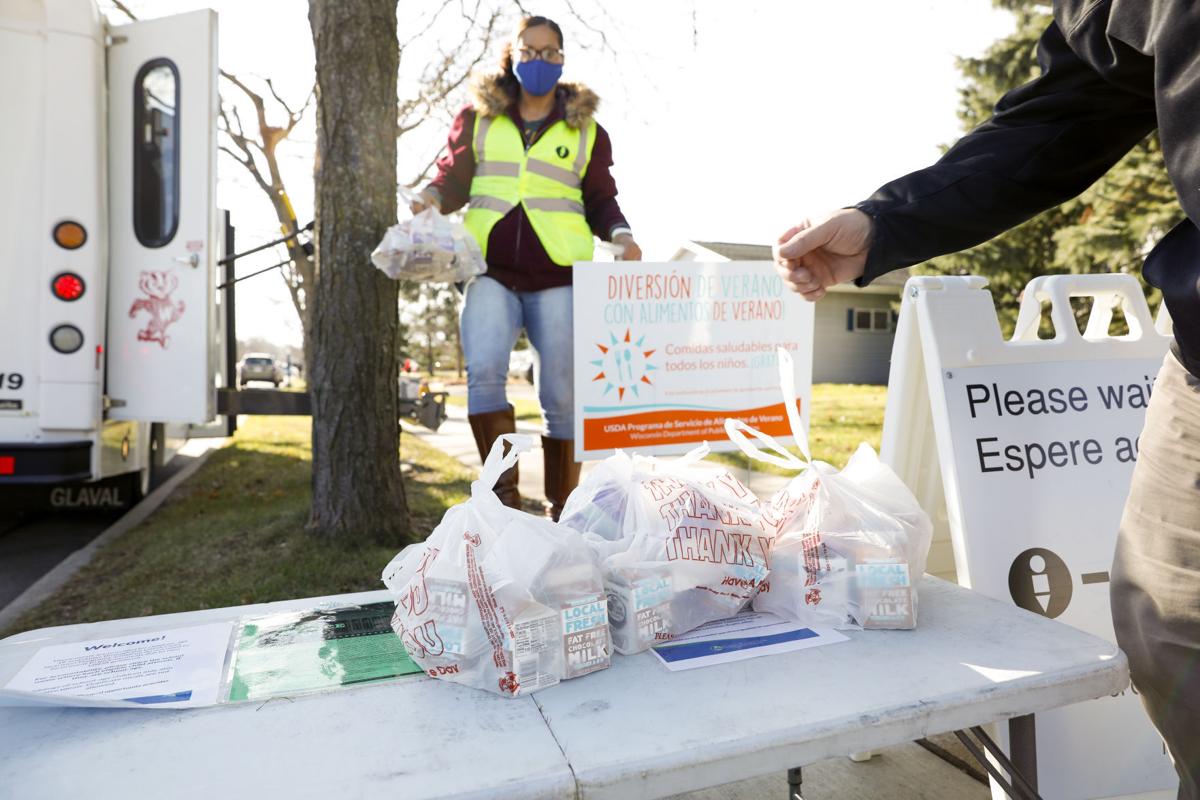 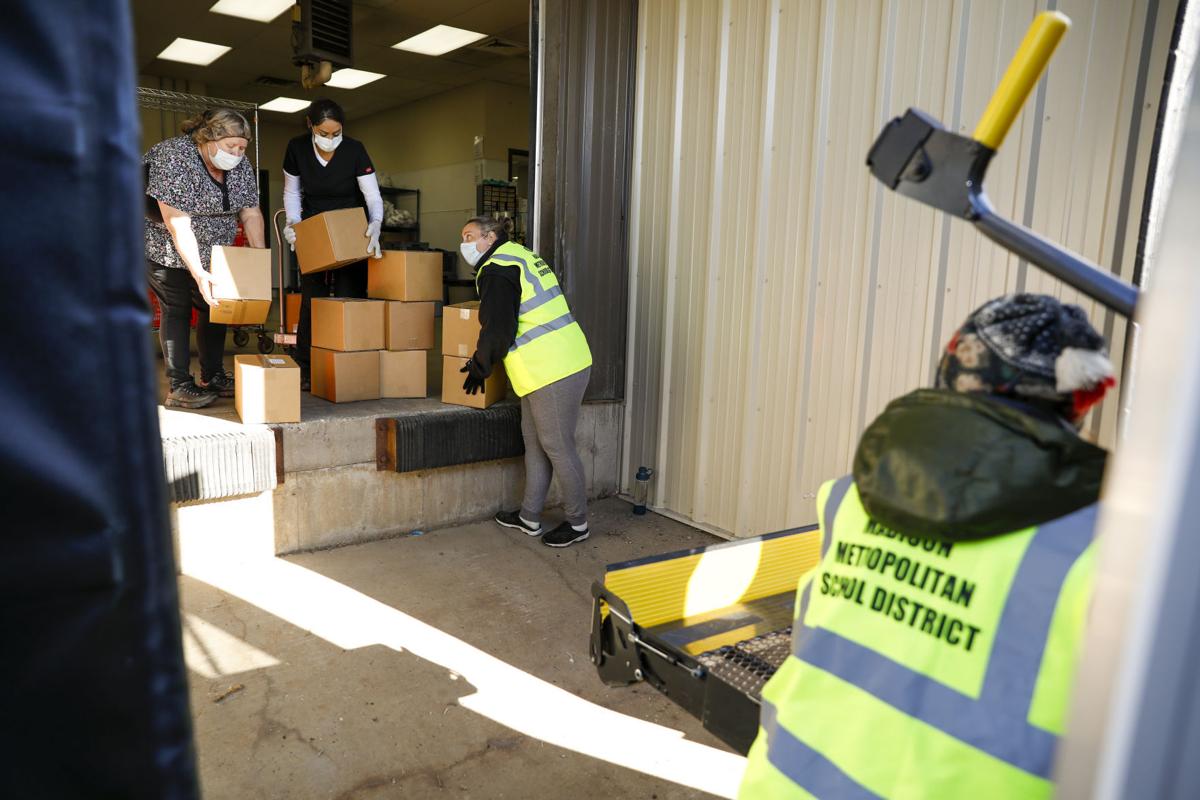 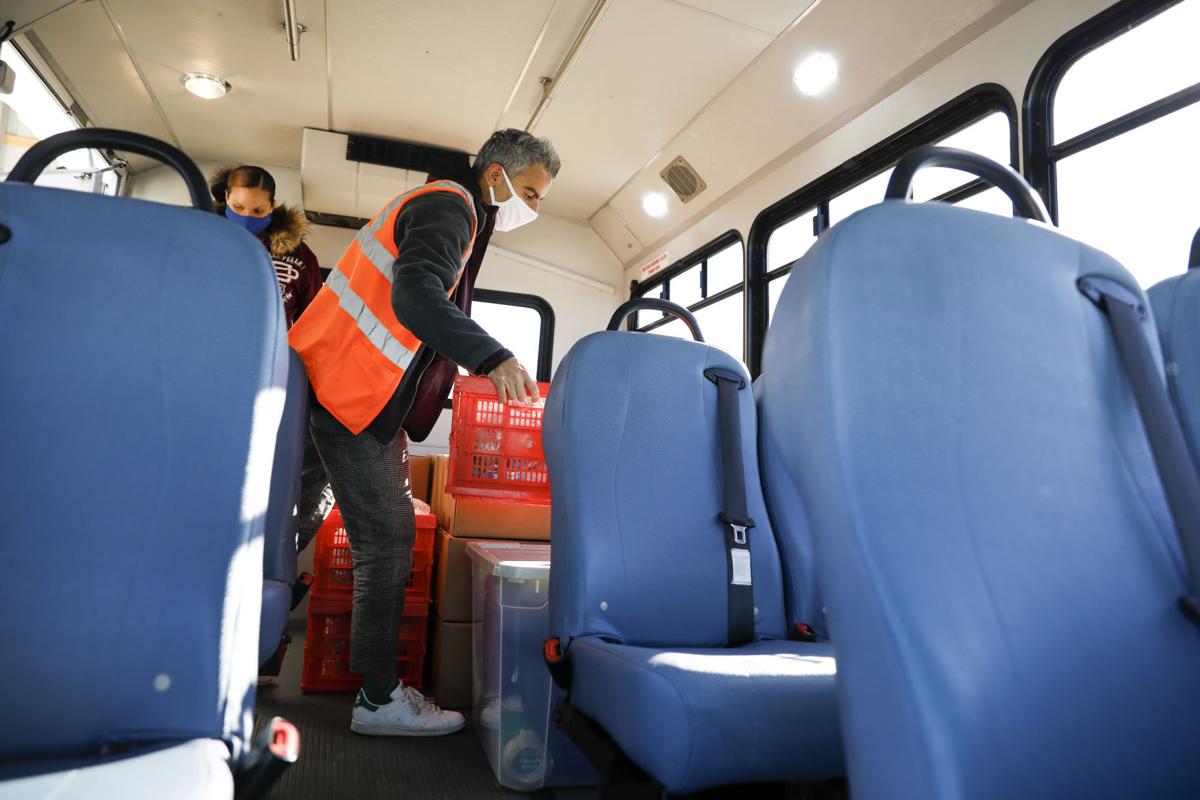 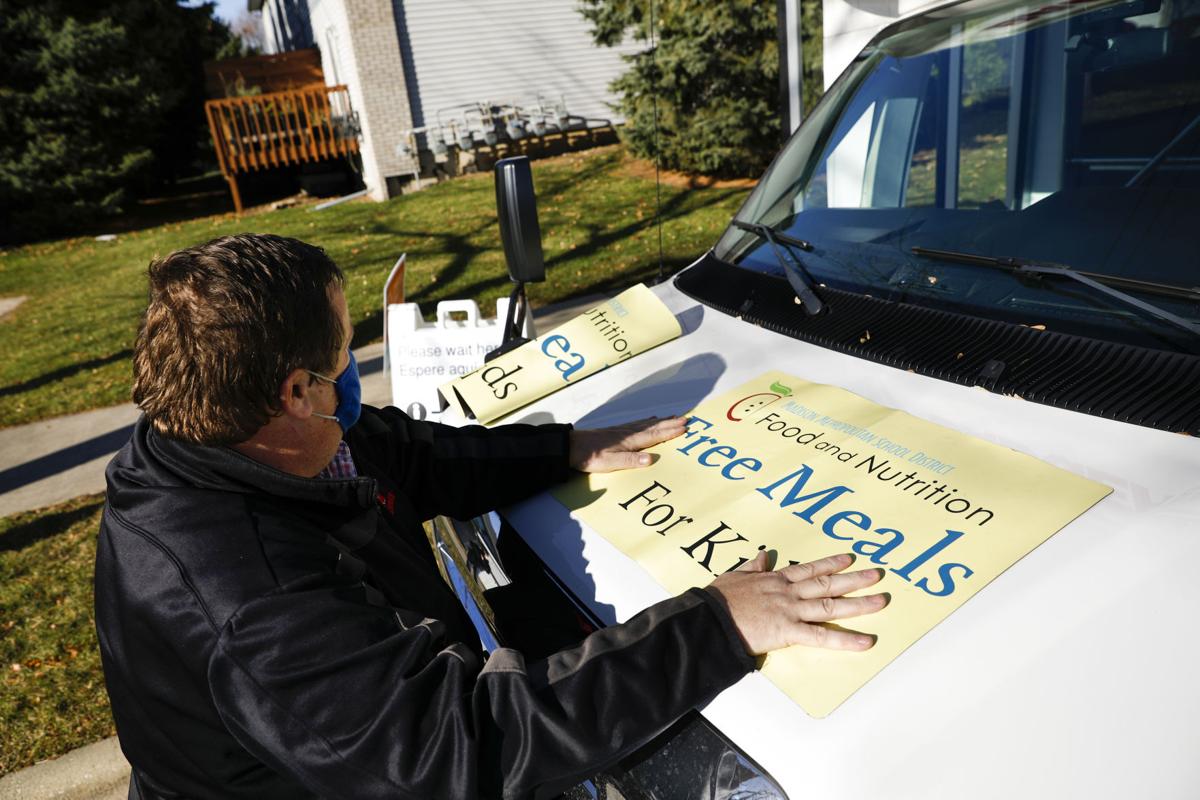 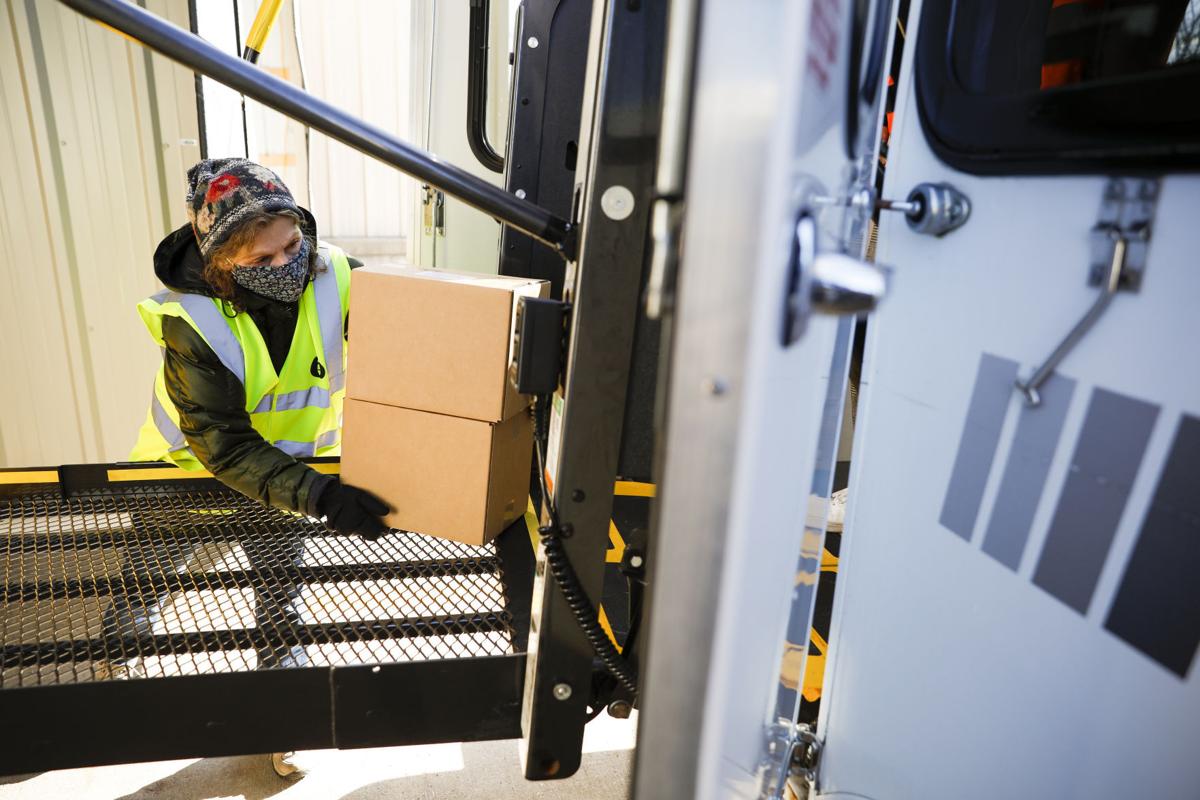 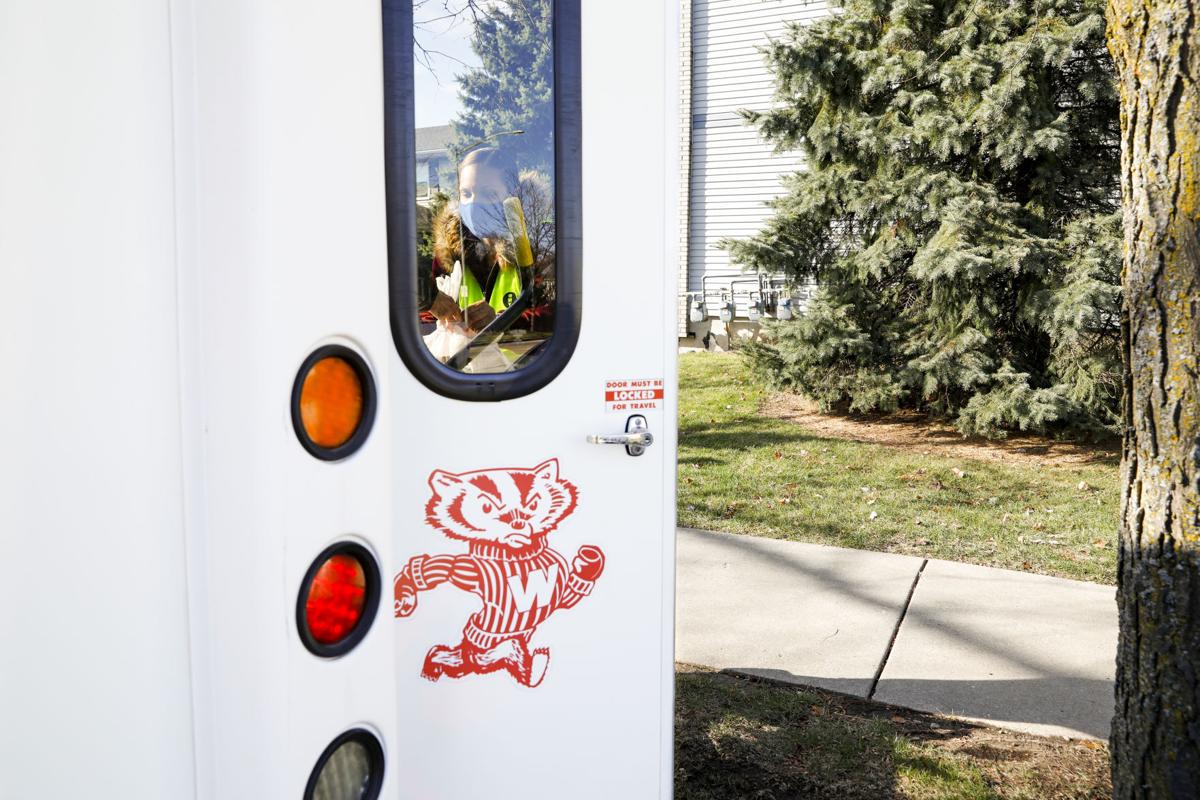 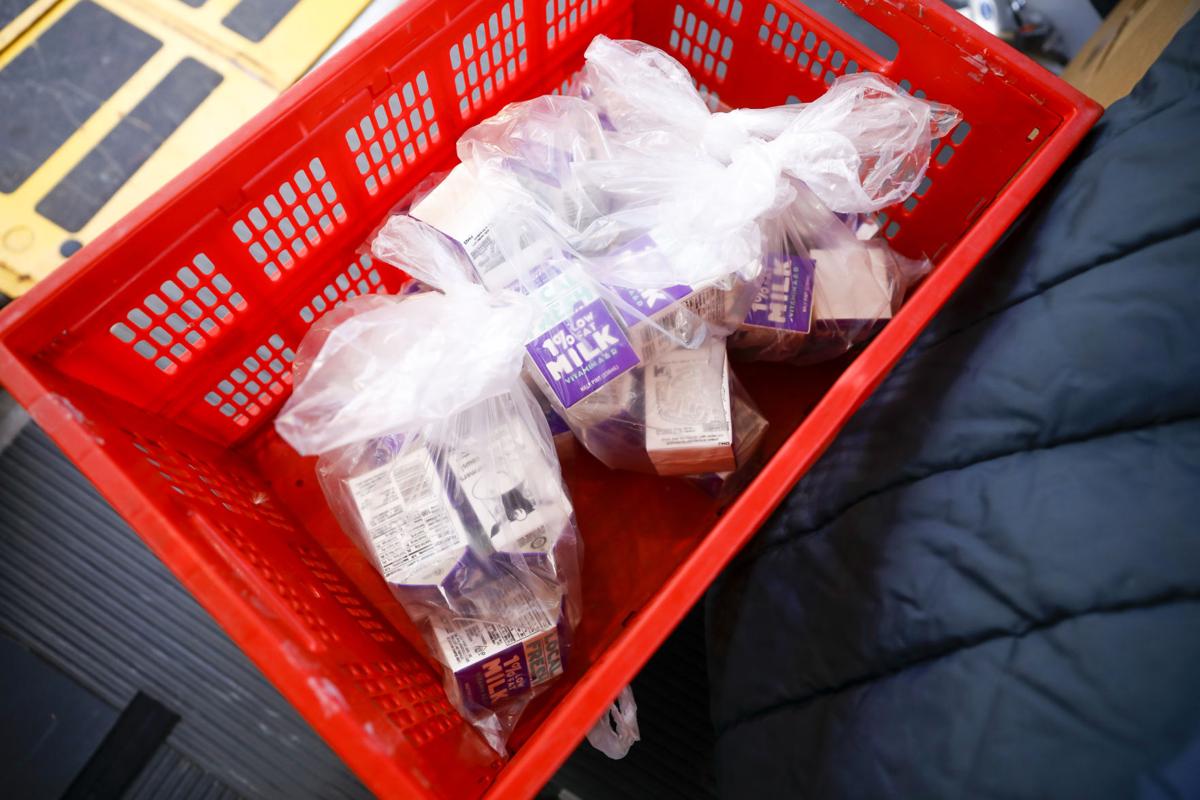 Cartons of milk are bagged and ready to distribute to Madison Metropolitan School District families from a bus, in the Ridgewood neighborhood. 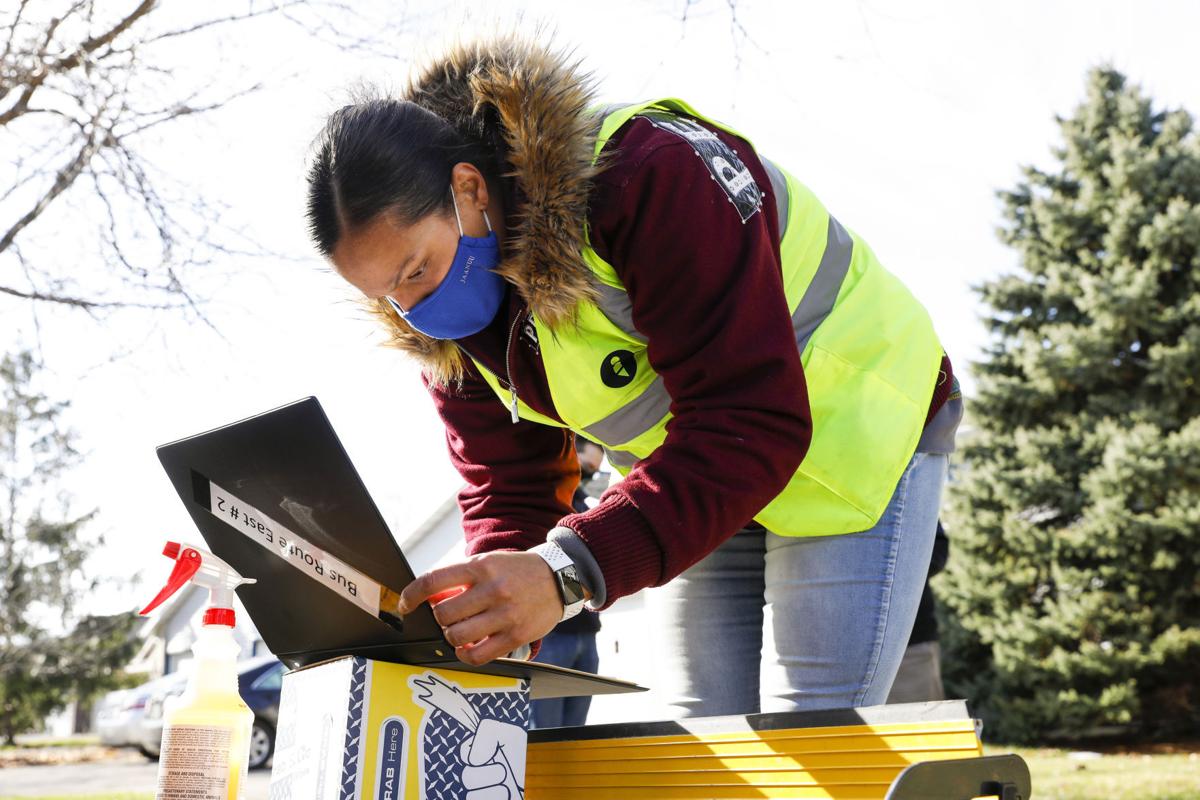 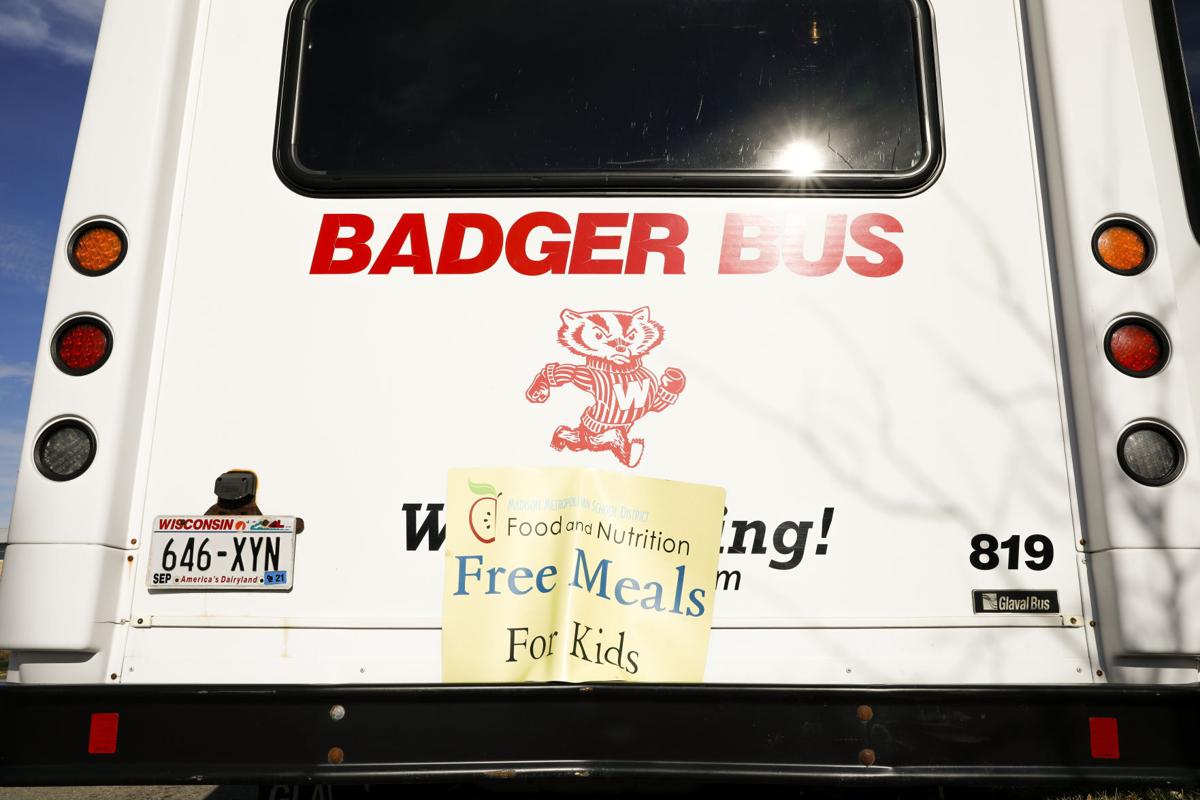 A sign, posted on the back of a Badger Bus, notifies Madison Metropolitan School District families of a mobile food distribution site at 1600 Wright St.

“You get three, right?” King said.

The man nodded, and King and her colleagues pulled three boxes full of food — five days’ worth of breakfasts and lunches in each — to pass along for three kids. It was the fifth week of the district’s new food delivery program, which brings a bus to stops around the city to supplement meal handouts at 40 school sites.

The food program is among those that required a quick shift when schools moved to virtual learning in March as the COVID-19 pandemic hit, with MMSD remaining virtual through at least the first half of this school year. Last spring, the district stationed employees at between 12 and 16 sites on a daily basis to hand out two meals a day for any child under 18.

With that approach, it gave away about 16,000 meals per week. That was nowhere near the number the district would serve under normal circumstances, leading staff to find ways to provide more access for families.

“Seeing the number go up, in a way, has a negative connotation in that there’s so many families in need,” food services director Steve Youngbauer said. “But on the positive side, being able to be a part of trying to meet that need and knowing that there are so many people involved in the operation, our staff has really embraced it.”

[‘Good news for all of us’: Federal waiver extensions allow MMSD to keep providing free meals to all students]

Eric Zimdars, the food services manager for the high schools, helps coordinate the bus program. Thursday, he road along with “Bus Route East #2,” which stops on North Thompson Drive, Wright Street, Onsgard Road and the intersection of Independence and Melody lanes.

He said “it’s been a challenge” to coordinate, but they got help — and even the idea for using the bus — from other districts that had tried different food distribution methods in the spring. Now that it’s up and running, he said they distribute between 60 and 70 food boxes weekly from the two bus routes.

“It’s fulfilling for everybody,” he said.

Amber Jelinek, who arrived at the Thompson Drive stop with two 12-year-olds in her car to pick up food boxes Thursday, said the program is especially helpful for working parents who are also trying to help their children through virtual learning.

“This is an amazing thing they’re doing for the community and I wish more people knew about it,” Jelinek said.

The changes for the fall would be much more challenging if not for a last-minute waiver from the United States Department of Agriculture. Just over a week before MMSD’s school year began, the department announced it would continue to allow districts to distribute meals free of charge to any district resident under the age of 18.

Without the waiver, the district would have had to document who was receiving each meal and charge those who were not eligible for free lunch — a massive coordination requirement for dozens of sites and families that could have limited the number of meals the district provided.

Instead, the waiver provided “good news for all of us,” building services executive director Chad Wiese said at the time.

“There were lots of moving pieces behind the scenes,” Wiese said. “We were literally going to have to take laptop computers out to every one of these sites and verify a student’s eligibility, verify that we had the right student and the right parent.”

The district’s leadership was disappointed with the number of meals distributed in the spring, knowing changes were needed to increase participation from families.

That left the question of what changes would work here, as they entered an unprecedented summer with many unknowns about what instruction would look like in the fall.

“We were really focused over the summer on an evaluation and planning phase of what we saw last spring,” Youngbauer said. “The focus there was, how can we increase the access for families?”

Among the major changes they implemented was giving away five days’ worth of meals all at once. In the spring, to get the 10 meals included in one of this fall’s boxes, a parent, child or sibling would have had to go back to a site all five days of the week — a challenge for working parents or those with children at home who needed supervision.

“It’s kind of inconvenient to go out every day to another location and have to pick up your meals,” Youngbauer added.

Now, with a once-a-week trip, Zimdars said picking up the food box seems like a highlight of the day for some families.

“It’s the exciting thing to get out (of the house) for the day,” he said.

Youngbauer said that concept came to them through conversations with the Minneapolis and St. Paul school districts, which began the practice in the spring. That change, along with a more than two-fold increase in the number of giveaway sites, has helped them see growth in families’ access.

“There is a good feeling knowing that people are getting the help that they need,” Youngbauer said. “I think it’s very rewarding for our staff, as well.”

Officials are still making changes as they go. The district added two late afternoon distributions, including one at Memorial High School that began last Wednesday. Youngbauer said they distributed 121 boxes there.

While distribution at 40 sites covers most of the school district’s neighborhoods, there are still some highly populated areas that don’t have a school within walking distance.

Those are the zones that Zimdars targeted when looking for places to send the pair of Badger Bus vehicles once a week.

The buses begin the day at the district’s Food Distribution Center on Pflaum Road, where staff load up a few dozen boxes one bus at a time. Once they’re loaded, they head to their first stops.

There, staff members go through a quick routine to set up a table, cones and signs highlighting the food distribution and encouraging social distancing. After about 10 minutes — or longer if they arrived early — they take it all back onto the bus and move to the next stop.

On Thursday, the Thompson Drive location had five parents come to receive food, taking 17 boxes among them for their children.

If they need more boxes after the first two stops on a route, the bus will return to the FDC to restock before heading to its third and fourth destinations. If it doesn’t need more food, that just means extra time at the third stop, Zimdars said.

That ability to restock meant all of the locations needed to be near enough to the FDC to make that feasible, so the routes were concentrated on the east side of the city.

Youngbauer called the bus partnership a “win-win” for the district and Badger Bus.

“It’s just a perfect way to work together on a project that helps people in our community,” he said. “It’s a great example of what people can do when they work together to try and solve problems.”

While the fall system is running, district officials are already preparing for what’s next.

In the short-term, that means winter. Youngbauer said they’re looking for ways to ensure staff at the distribution sites have some sort of shelter from the cold or snow, whenever it inevitably comes.

On the bus routes, winter could pose a challenge for keeping food temperatures low and safe while keeping staff warm. The weather will also pose challenges for where they can park as plows move through the streets after an overnight snow.

Youngbauer also noted the upcoming holidays, with an altered schedule for Thanksgiving week.

“Trying to balance out, how can we get some adequate time off for our staff … and balance that need out with the need to have food access for families in the community?” Youngbauer said.

There are also long-term considerations for officials.

“We’re in a phase of, at some point here, school’s going to reopen, so we’re hard at work with, what is that plan going to look like?” Youngbauer said.

“The COVID-19 pandemic has challenged our schools in ways never seen before. It magnified many existing inequities in our state and highlighted essential areas where our students and educators need further support,” State Superintendent Carolyn Stanford Taylor said in a news release.

Both questions passed decisively on Tuesday with support from more than 74% of voters in the Madison Metropolitan School District.

Staff recommended against applying for a waiver from the state on the teacher evaluation tool.

Over the coming four weeks, students will break into smaller groups to discuss three topics: climate change and the circular economy; how do we keep Europe and the U.S. connection after the pandemic?; and the future of learning after the pandemic.

Voters around Wisconsin approved 43 of the 51 school ballot measures in the Nov. 3 election.

Aiyenero is in his third year as a student support specialist at One City Schools, where he also runs the morning student biking program, and is an academy coach with Chicago Fire FC.

2020 was a year of change, both sudden and expected, in Madison's local schools

The shift to virtual learning, removing police from schools, a pair of historic ballot measures and hiring a new superintendent (or two) were among the big stories in Madison schools this year. 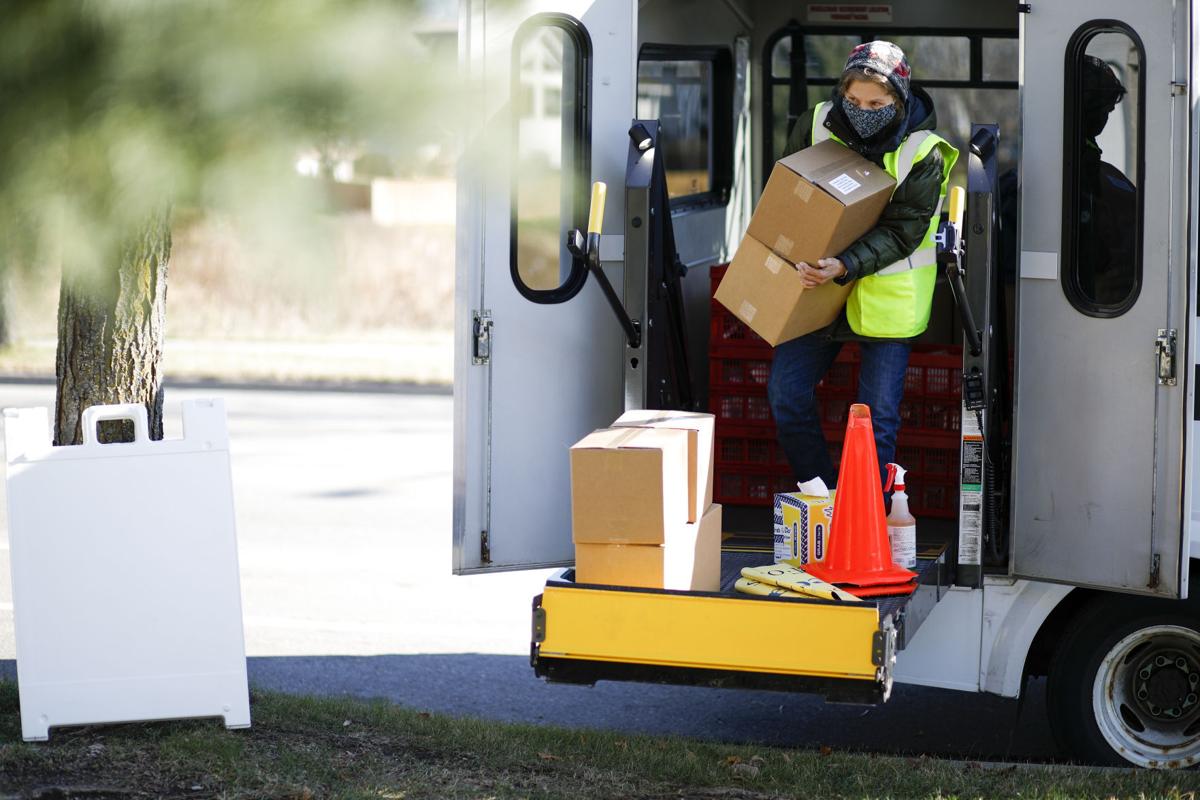 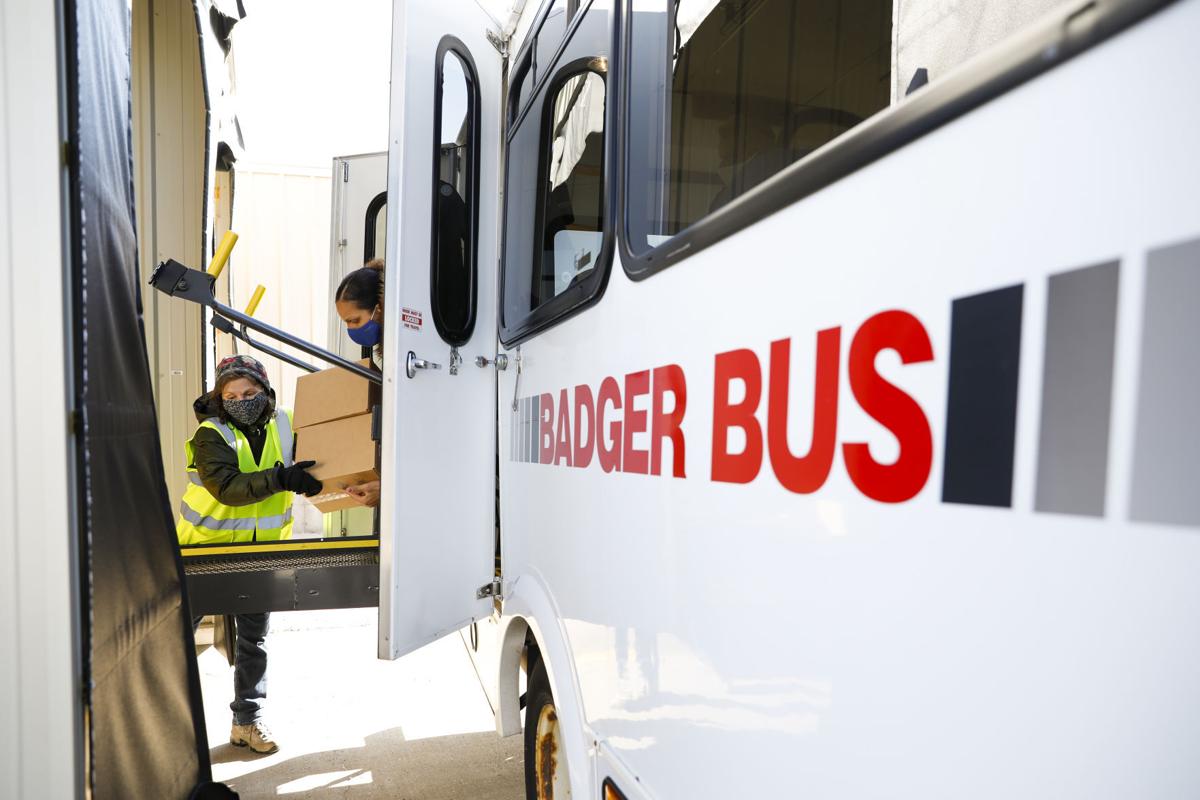 Cartons of milk are bagged and ready to distribute to Madison Metropolitan School District families from a bus, in the Ridgewood neighborhood.

A sign, posted on the back of a Badger Bus, notifies Madison Metropolitan School District families of a mobile food distribution site at 1600 Wright St. 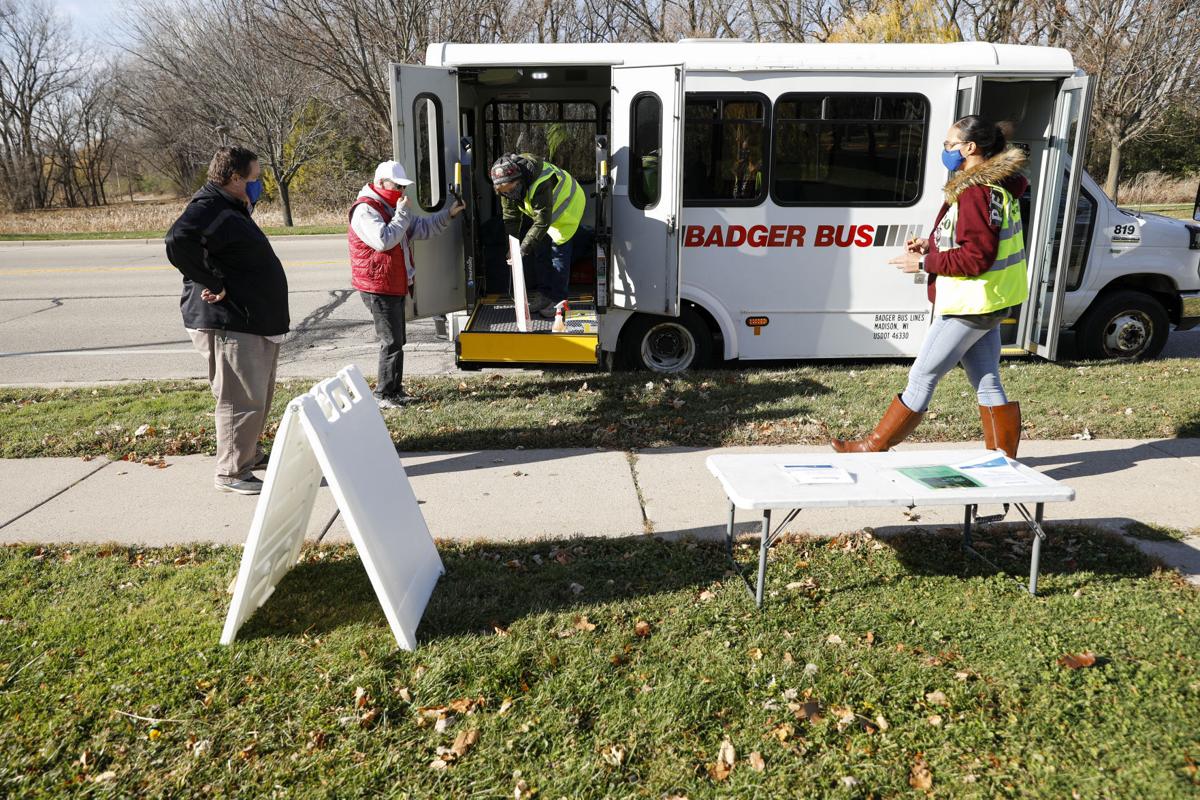