Nadia Cid was signed into her Chromebook shortly after 8:30 a.m. Tuesday, waiting patiently in front of her screen for the morning’s first class to begin.

The Sherman Middle School sixth-grader chatted with her parents in her bedroom while sitting at her desk — pencils and notebooks on her left, a calendar to her right and her stuffed animals up in the top corner of the room.

At 9 a.m., the teachers began introducing themselves and asked students to do the same, while April and Cruz Cid sat behind their daughter holding the family’s two dogs.

“Hi my name’s Nadia and I went to Hawthorne Elementary,” she told her classmates when it was her turn. “One thing I liked was my teacher that I had, and one thing I didn’t like was music.”

Similar scenes played out all across the Madison Metropolitan School District Tuesday as teachers, students and parents began an unprecedented school year entirely virtually as the COVID-19 pandemic continues. The district will remain virtual-only through at least the first quarter, which runs through Oct. 31. Any return to in-person instruction hinges on a change to Public Health orders or the community meeting the thresholds officials have set, which outlines the number of COVID-19 cases that would be acceptable to hold in-person classes for grades 3-5 and 6-12.

While it’s a challenge for everyone involved, it’s particularly difficult for those transitioning into a new school — kindergartners, sixth-graders and high school freshmen don’t have the connection with their school that those who have been there in-person in the past have built up.

[‘Good news for all of us’: Federal waiver extensions allow MMSD to keep providing free meals to all students]

April Cid, Nadia’s mother who works from home, said the middle school transition would have been a big one, with her daughter having to move between classes instead of remaining with a homeroom all day like she did in elementary school.

Throughout the introductions in Nadia's class, there were a few interruptions and technical snafus, but the teachers did their best to keep the process moving while making sure everyone had a chance to speak.

Nadia said she was “sort of, not really” disappointed she’d be learning at home for now, but she does want “to actually see people” at school at some point this year. Until then, she'll enjoy the perks of being at home.

“I can just stay in my pajamas,” she said with a big smile.

His desk faced a wall of windows through which the Emerson Elementary School building and playground were visible. Sam laughed with his new classmates and teacher during a game on his Chromebook.

He spent much of the morning learning about Zoom and its functions. His mother Julia Richards, who sat a few feet away at the family’s table, said she was happy about him learning that “important skill” in today’s world, though she wishes “he had the opportunity to be around other kids.”

Shortly after the game with his class ended, Sam took his headphones off and jumped around on the floor and sofa during a 15-minute break, eating a snack and getting some energy out through activities that didn’t involve looking at a screen.

Richards is concerned about the potential long-term effects of screen time, and is mostly hoping Sam “doesn’t lose ground” during virtual learning.

“It is what it is,” Richards said. “We’re getting through.”

While she said it was a good start early Tuesday, she’s anxious to see how the quarter continues — she recalled he and his classmates losing some interest as virtual learning progressed in the spring.

“The question is, will they be able to maintain engagement for months?” Richards said.

As the day went on, she wrote in a text message to the Cap Times later Tuesday, there was “lots of reminding kids to unmute and mute” and some “technical difficulties.”

“All handled with a ton of patience,” she wrote. “The teacher even taught them how to twiddle their thumbs when they need to wait.”

For Dave Curtis and Erica Butt, Sept. 8 was one of the biggest milestones in parenting: their oldest child’s first day of kindergarten.

They still took a family photo in front of Midvale Elementary School after dropping their younger daughter at daycare, but every other part of the day wasn’t what they’d envisioned for their son Finley.

“It’s still a big day,” Curtis said as the morning was wrapping up. “It still has sort of the gravity it did normally, it just looks so different.”

Sitting in an enclosed porch off of their living room, Curtis and Butt took turns going back into the house to check on Finley as he sometimes stood up and walked around or would say something to his Zoom classmates. Curtis is able to work from home and move some of his work to non-school hours while Butt works three 12-hour shifts each week, so they’ll trade off duties for keeping Finley on task.

“We have to listen to instructions and support pretty much everything at this point,” Curtis said, hoping that as the quarter progresses they’ll slowly be able to be less hands-on.

Butt said Finley had asked to read a book during an earlier break, giving her hope that he’ll push for non-screen activities when possible. Curtis said he appreciated the teacher’s message to the students that they can turn off the camera and step away when they need to, and Butt said a morning agenda for the day was helpful.

As disappointing as it was to not have the traditional kindergarten drop off, Butt added that she was happy to be spending more time with her son, and Curtis sees it as a chance to “let him pursue his interests” a bit more.

“We’re trying to make it an opportunity in some ways,” he said.

Getting through it together

“I didn’t get to see my friends and stuff,” he recalled Tuesday afternoon.

The East High School freshman’s 2020-21 school year didn’t begin much better. Trent’s first class of the day, painting, was canceled at the last minute, as the teacher had retired and no one had filled the position, and a later class had some technical difficulties.

“I just want to get back to school,” he said, adding he’s hopeful that will happen this year.

But his older sister, Alayna, was sitting next to him through it all, and the EHS senior helped him appreciate learning from home even amid the frustration.

“(It’s) easier because I have somebody to talk to,” Trent said.

The two were sitting together in the family’s kitchen, despite having desks set up in their own bedrooms. Their mother, Tanya, said those desks proved challenging in the spring for avoiding distractions.

Alayna’s morning went much more smoothly than her brother’s. Her class load includes four Advanced Placement classes, which she said she signed up for since she doesn’t have volleyball this fall, giving her more time to complete homework.

She said she misses the opportunity to stay after class to ask an extra question or follow-up with teachers more directly during virtual learning, but overall the first day was “going well” and she was “hopeful” for how the quarter would go.

“I haven’t really had a problem with anything,” she said. “I feel like it’s harder to reach out to teachers, you really have to advocate ... for yourself and reach out.”

The disappointments for her are in losing traditions like homecoming, dressing up for spirit week and celebrations of senior athletes.

“Just senior things won’t be happening but hopefully when school starts again we can do those things over,” she said.

Tanya Tucker had stayed home Tuesday to help them through the first day, but normally both parents work outside the home during the day.

“I stayed home with them but they don’t really want my help,” she said. “I’m really fortunate they have each other and are older.”

Photos: Back to (virtual) school

Madison Metropolitan School District students logged on for the first day of virtual school in the 2020-2021 school year on Tuesday, Sept. 8. …

'We have an important first day coming up': MMSD set to begin year with virtual learning

The first day of school this week will look different from every other in the history of the Madison Metropolitan School District.

The Foundation needs volunteers Sept. 10 and 11. On Thursday, they will help coordinate supplies and set up an assembly line for stuffing the supply bags, and on Friday volunteers will stuff the bags and prepare them for delivery to schools.

‘Good news for all of us’: Federal waiver extensions allow MMSD to keep providing free meals to all students

Meals will be distributed in weekly packages at 40 Madison school sites with five breakfast and five lunch meals.

Throughout the hour-long program, staff stressed the importance of social and emotional learning, mental health and creating a sense of “belonging” in the unfamiliar environment of virtual learning.

The waivers would allow exemptions from state requirements on attendance, instructional minutes and the Civics Exam.

While the sides make their arguments on the merits of the order over the next 60 days, the state Supreme Court determined that continuing to bar in-person school would do “irreparable harm” and indicated in its opinion a likelihood that the challengers will win the final decision, as well.

The event, sponsored by several Madison child-centered organizations, will begin at McPike Park at 3 p.m. From there, people will take a short march to Orton Park, where Madison School Board member Ali Muldrow will speak about the importance of educating children about race.

Each of the informational sessions will focus on the projects at one of the high schools, with all streaming from 5-6:30 p.m. on the district’s Facebook page.

While unknowns remain as the COVID-19 pandemic continues, officials are more confident in certain revenues than they were in June when the board approved its preliminary budget, expecting an extra $6.3 million over what was included two-and-a-half months ago.

Maxine McKinney de Royston has been at UW-Madison for five years.

The School Board meeting begins at 6 p.m. Monday online.

The Madsplainers podcast: How will special education students fare this fall?

Cap Times K-12 education reporter Scott Girard explains how families and Madison schools are working to get students with disabilities the education they deserve, pandemic or not.

State Debate: RBG's death and the Supreme Court battle ahead lead the commentary 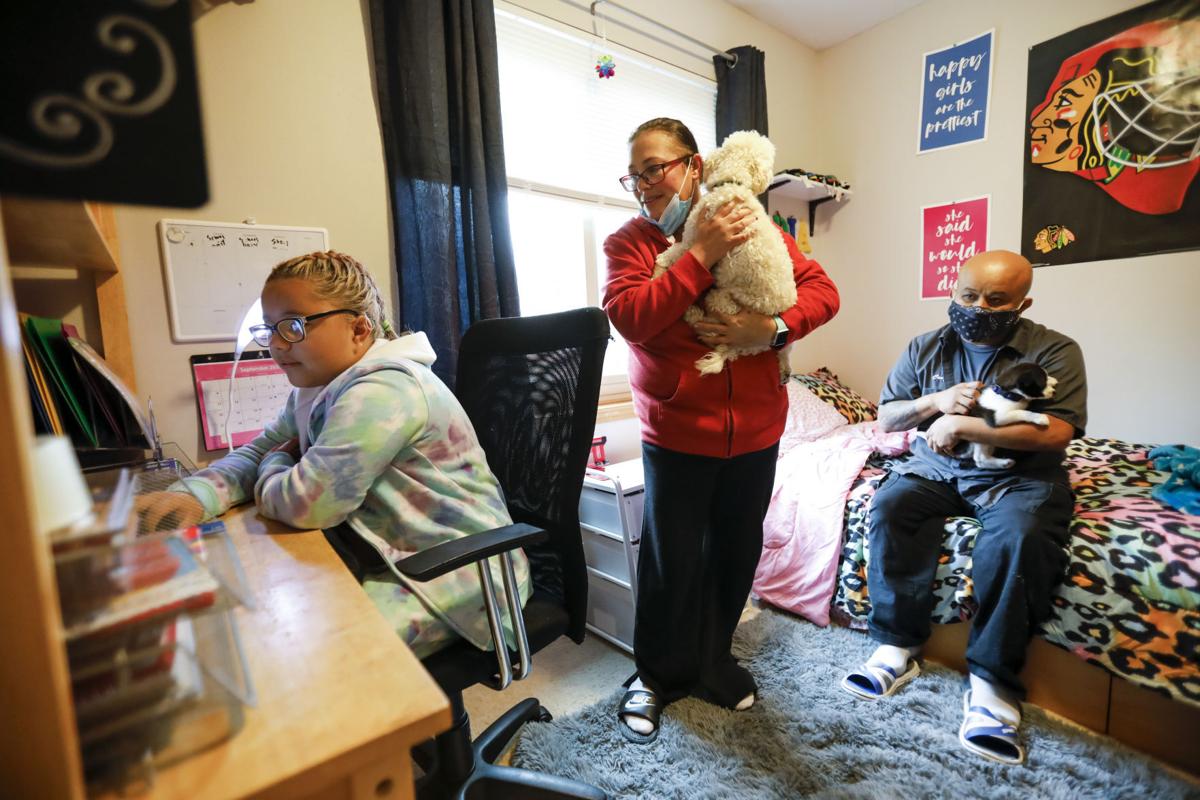 Nadia, Cruz and April Cid and their two dogs gather in Nadia's bedroom to log in for the first day of virtual school for the 2020-2021 school year. 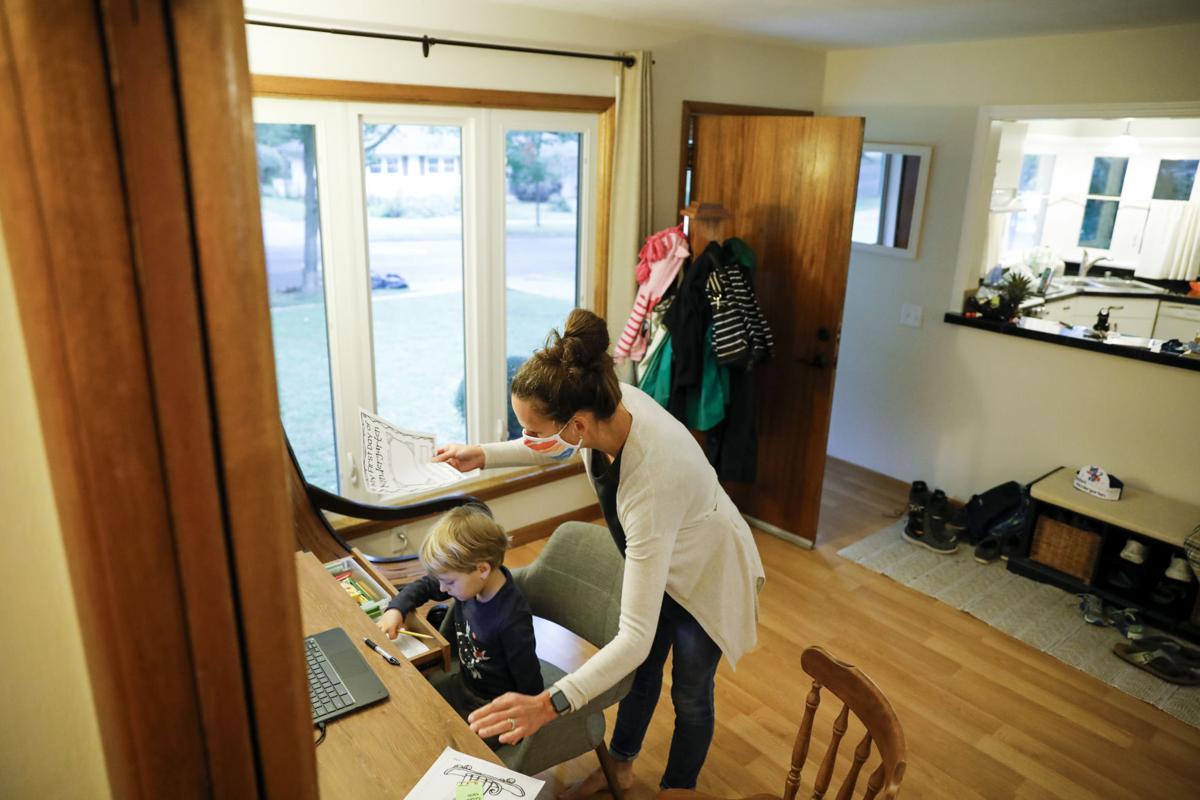 Midvale Elementary School kindergartner Finley Curtis and his mom, Erica Butt, learn the ways of the virtual school program, on the first day of virtual school, on Tuesday, Sept. 8. 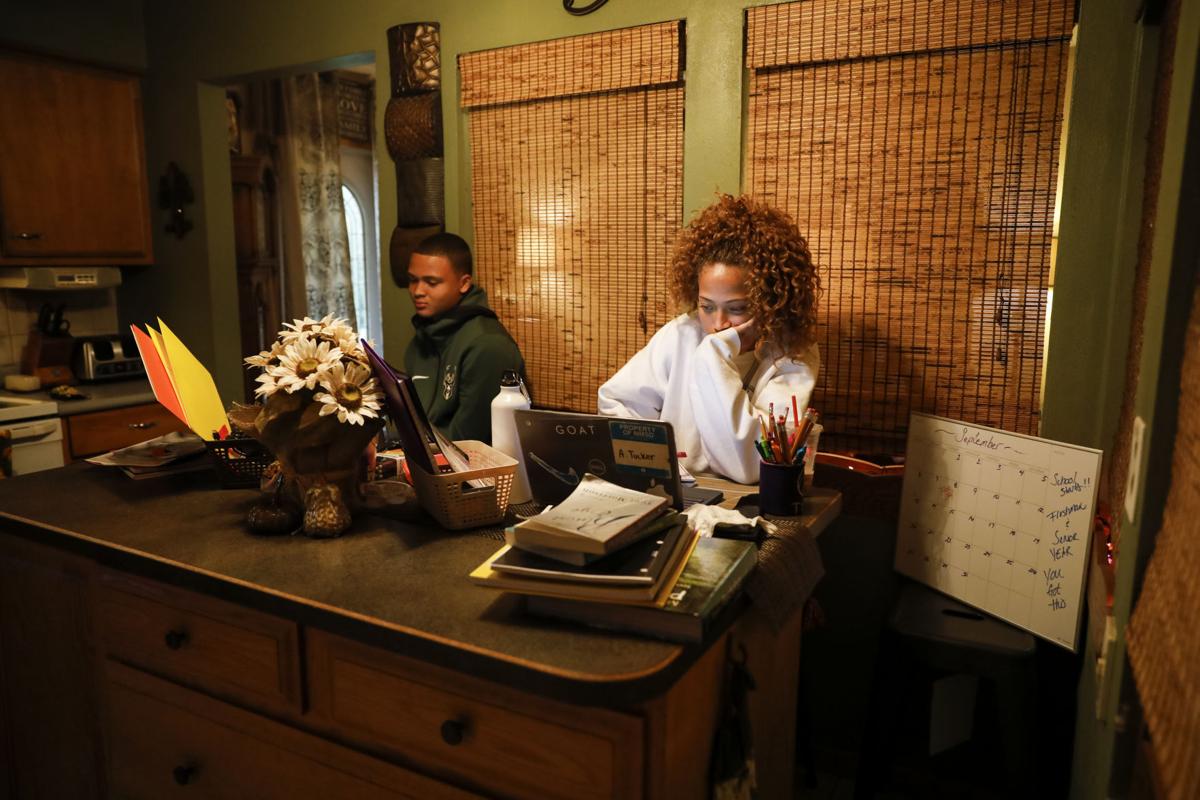 East High School students, Trenten Tucker (freshman) and Alayna Tucker (senior), attend virtual school from the kitchen of their home, on the first day of virtual school, on Tuesday. 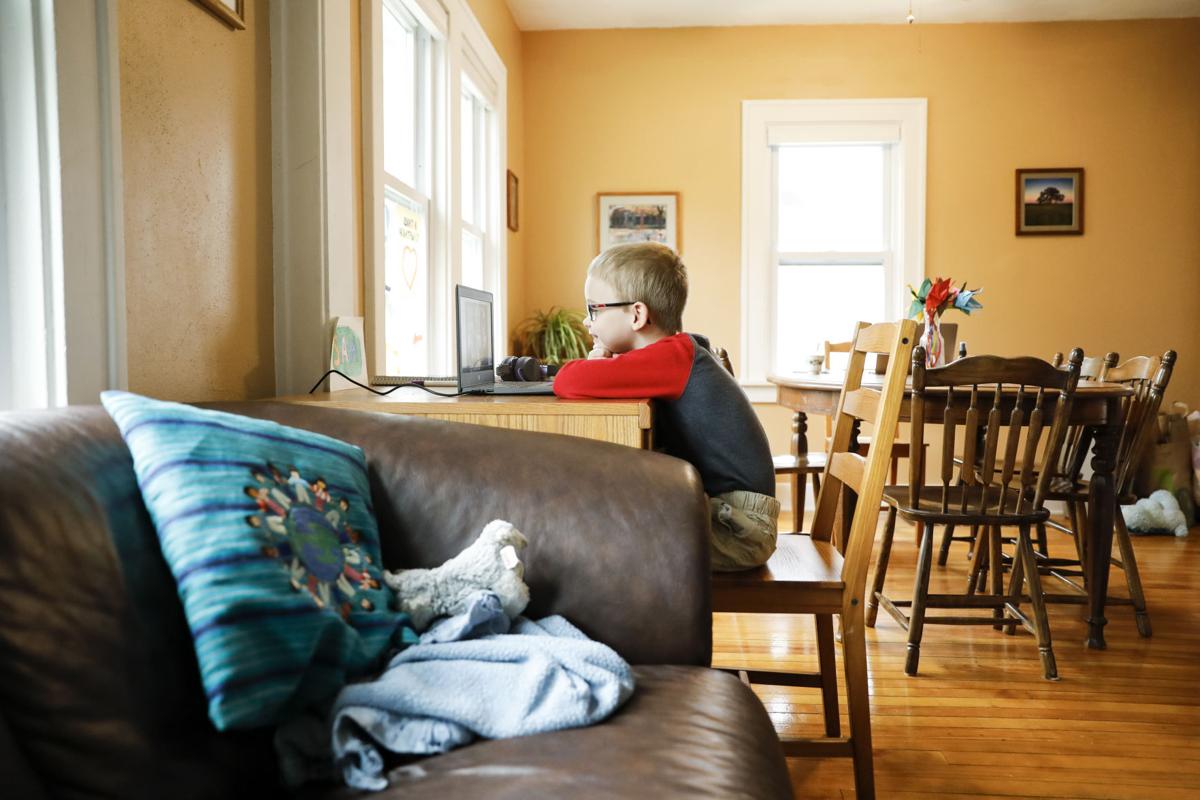 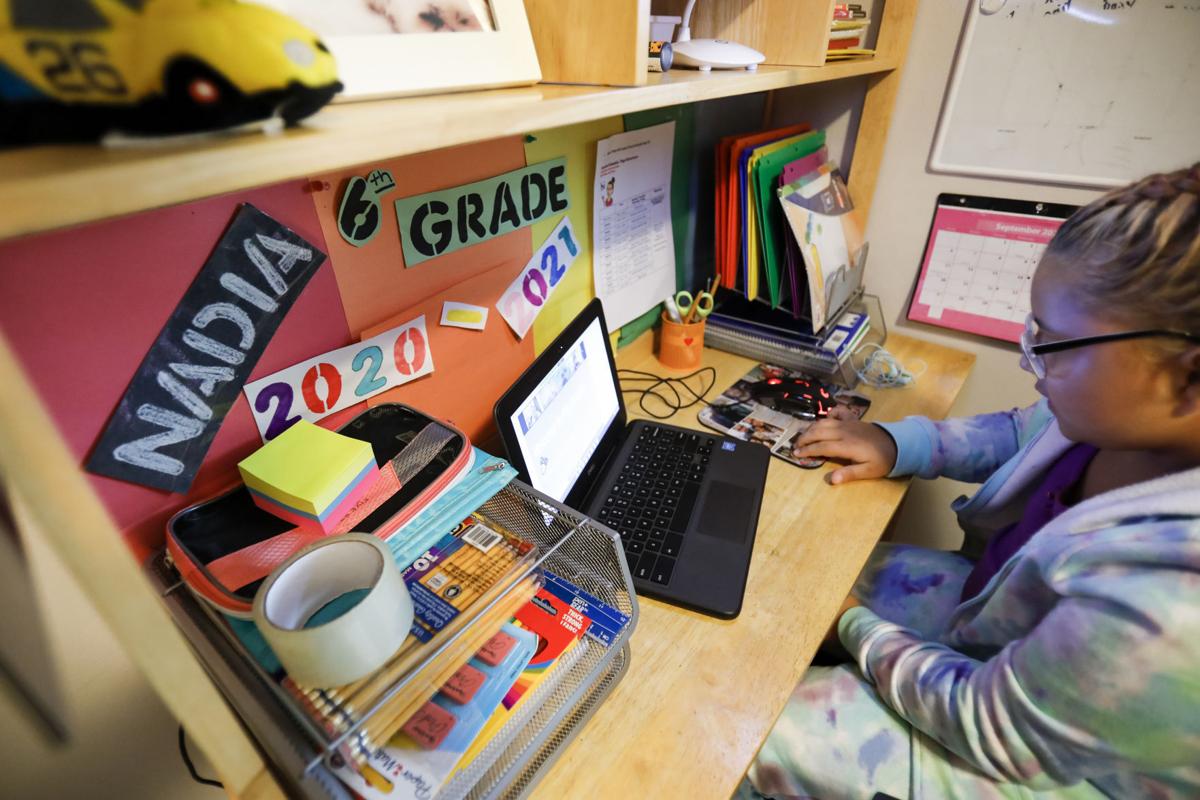 Sherman Middle School sixth-grader, Nadia Cid, signs on for the first day of virtual school. Her mother made a sign to decorate her daughter’s desk for her first day of middle school.