More than twice as many Wisconsin families as a year ago have told the state they plan to homeschool for the 2020-21 school year.

According to data from the state Department of Public Instruction, 1,661 families filed forms to homeschool between July 1 and Aug. 6, up from 727 during the same period a year ago and 599 two years ago. The number of students in those families is up to 2,792 from 1,279 last year and 1,088 two years ago.

The same is true locally, as 122 Dane County families with 202 students filed forms in that period, up from 55 and 80 last year.

Michelle Yoo, the administrator of the Madison Area Homeschoolers Facebook page, said she’s seen evidence of the uptick in interest.

“When Madison announced they were doing online school, I think I had about 100 requests to join in about a two-week period,” Yoo said. “I can’t tell you what I used to get, but it was nowhere near 100.”

With those students go funding, as district revenue limits and state aid both depend on enrollment. The Madison Metropolitan School District discouraged parents from leaving to homeschool or attend a private school in its Aug. 7 family newsletter, citing that funding loss.

“Even a small percentage of students withdrawing makes a huge impact, not for one year but for three years,” the newsletter states. “Our revenue from the state is dependent upon the number of students enrolled on the third Friday in September.

“A student who does not enroll in MMSD by the third Friday in September but then returns to MMSD once we return to in-person learning means that we lose the state revenue for the child, not just for this first year, but for the next three years due to the state's three year rolling average formula.”

With the three-year rolling average, MMSD spokesman Tim LeMonds said in an email the loss of each student enrolled would cost about $4,300 in revenue limit authority for the upcoming school year and additional losses over the next two years. LeMonds added that does not take into account any federal grants that are distributed on a per-pupil basis.

The district has promised its virtual learning will be better than it was this spring, when it got mixed reviews from parents amid a scramble to implement an entirely new system. It’s calling on parents to think about equity in making decisions for the fall.

“(Funding loss) impacts everything in our district, but especially our ability to invest in the vision in our Strategic Framework, which aims to close opportunity gaps for students and invest in hiring and maintaining high-quality staff,” the newsletter states. “We know each family needs to make the best decisions for their children, but we hope you will pause to consider equity as well as our improvements to virtual learning before making a final decision.”

To homeschool, a family must file a PI-1206 form with DPI annually by Oct. 15. State statutes define a “home-based private educational program” as one “of educational instruction provided to a child by the child's parent or guardian or by a person designated by the parent or guardian” with at least 875 hours of instruction and a “sequentially progressive curriculum of fundamental instruction in reading, language arts, mathematics, social studies, science and health.”

“An instructional program provided to more than one family unit does not constitute a home-based private educational program,” the statutes state, meaning pods with multiple families or micro-school groups would not qualify under the law. The spread of those concepts in recent weeks, as many districts around the country have announced they will begin the year virtually, have also created concerns about equity.

Madeline Hafner, an associate scientist with the Wisconsin Center for Education Research, said given the timing, the rise in homeschooling applications is likely unrelated to the typical reasons families choose to homeschool.

“Often there’s a religious difference, we don’t want our children to experience X, Y and Z, to be taught about certain social phenomena or scientific phenomena,” Hafner said. “But my bet is that’s not who's leaving, that’s not why they’re leaving right now.”

She expressed concerns about what too many families leaving would mean for the future of public schools, and encouraged parents to consider the “social contract” of being part of a community.

“As a parent, we all need to keep remembering we will get through this pandemic and it’s not about accumulating the most academic gain or even a typical academic gain,” she said. “It’s not a typical year, nothing is typical.

“It’s about keeping our social lives, our emotional lives intact. If we don’t keep supporting one another, one of the ways our communities support each other is through public schooling … if we don’t keep our eye on that prize I worry about what we will look like in a year.”

Yoo, who has four children, said the increase in interest is “really exciting and a little bit nerve-racking,” as she wants to make sure parents understand what homeschooling entails.

The first question for most new to the concept, she said, is what curriculum to use, with many available depending on the level of parent involvement expected and the child's best way of learning.

“As they’re getting into homeschooling, and I love seeing that interest, I just want to make sure that people realize homeschooling is not crisis schooling, which is what they were doing last year when schools went online,” she said.

She said playing to a child’s interests is key, including how they structure their day.

“You don’t have to start at 7:50 and do math for 50 minutes and a 10 minute break and these exact same school schedules,” she said. “You can start at what time works for your kids, If they want to sleep later, let them sleep later.”

It’s not necessarily going to work for every family, she added, but parents are trying to make the best decision for their child in a challenging time.

“Public schooling is not right for everyone," she said. "Neither is homeschooling."

Nearly every county in Wisconsin saw an increase in homeschooling for the upcoming school year over the same time period a year ago. 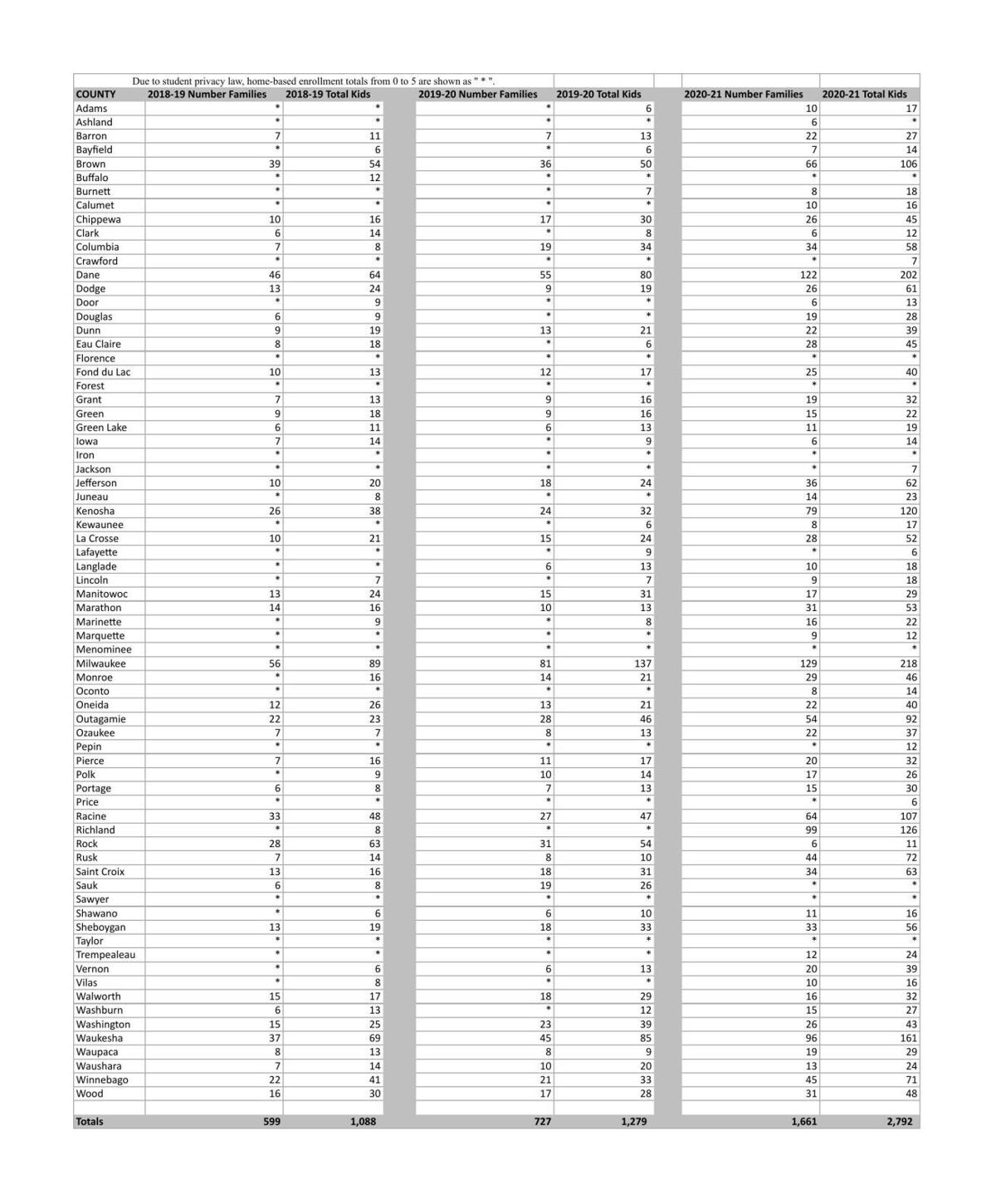 The largest increase for a single county is in Richland, which had five or fewer students and families fill out the homeschooling form July 1-Aug. 6 last year, with the state redacting the exact numbers for student privacy reasons. This year, according to the DPI data, 99 families with 126 students filled out the form in that same time period.

The exceptions to the increase are Rock, Sauk and Walworth counties.

Rock had the largest decline, as 31 families and 54 students had filled out the form last year. That’s down to six and 11, respectively, as of Aug. 6.

In Sauk County, 19 families with 26 students applied by Aug. 6 last year for homeschooling, but this year’s numbers were at five or fewer, and therefore redacted.

Walworth County saw a drop in families requesting homeschooling, but an increase in the number of students. In 2019-20, 18 families with 29 students filled out the form during the July 1-Aug. 6 time period. This year, it was 16 families with 32 students.

The pandemic would be the biggest story of anyone’s year as a school district leader, but the 2019-20 school year included discussions about racial slurs, two superintendent hiring processes and incidents that strained trust for some families, all of which required Jane Belmore's attention.

Madison Metropolitan School District officials announced a virtual start to the school year on July 17. In-person school will not begin before Nov. 3 at the earliest.

Some private schools reported an uptick in interest since the Madison Metropolitan School District announced it would begin the year virtually.

The Verona Area School Distirct is holding two one-week sessions of in-person summer school. The district's School Board voted July 27 to begin the school year with kindergarten through second-grade students having the option for in-person learning, as well.

The S²MARTLY in the Park program, organized by Mt. Zion Baptist Church, seeks to combat the so-called "summer slide" as students are out of school, exacerbated by the COVID-19 pandemic.

UW-Madison epidemiologist Malia Jones said schools will "end up with a compromise that some people don't like" as they figure out how to navigate teaching and learning amid the pandemic.

The Madison Metropolitan School District human resources and professional learning departments began collaborating on plans for bringing new teachers in before the pandemic.

The first panel, focused on antiracist education, runs from 3 to 5 p.m. and a second focused on virtual learning will begin at 5:30 p.m.

Madison School Board approves updates to restraint and seclusion policy

Throughout the hour-long program, staff stressed the importance of social and emotional learning, mental health and creating a sense of “belonging” in the unfamiliar environment of virtual learning.

A variety of school choice advocacy groups, parents and private or parochial schools filed lawsuits asking the court to block the local order.